March 18, 2019: See first comment. Most of what I wrote this week was just a regurgitation of natural gas stats accessed through the natural gas storage report page. Key points were that this was the largest natural gas withdrawal on record for the month of March (but not by a lot; there was also a 198 bcf and a 192 bcf March draw in recent years) and that with our supplies now 359 billion cubic feet below where they were on the same date in 2018, we have to add an average of at least 10 billion cubic feet more natural gas to storage each week for the rest of this year than we did last year to avoid going into next winter in worse shape than we did this one...

April should afford us the opportunity to catch up, though, since last April was unusually cool. Anything close to normal temperatures, and injections should start April 1st.

More at this link.

Link here. In addition, we should see a nice in-depth analysis of this on Sunday, March 17, 2019.  Hey, isn't that St Patrick's Day? Sunday? Well, that's a bummer. Need to celebrate Saturday, starting about noon, I suppose.

Now, back to natural gas.

Comments later, but the current "gap" is the widest in recent memory. 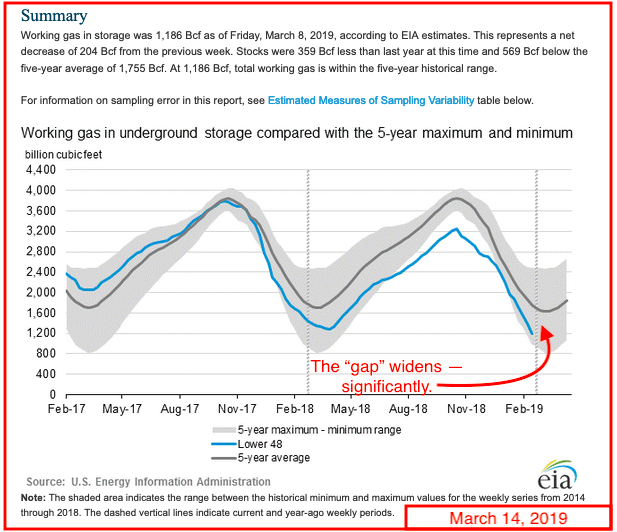 From a reader today: 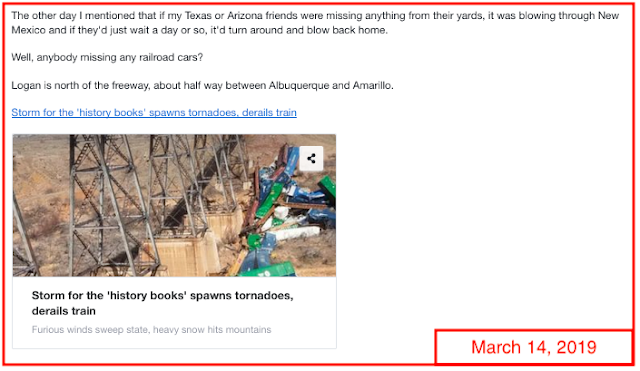 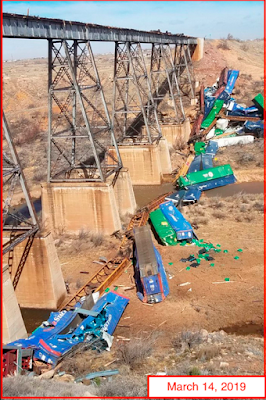 
A storm system forecasters called historic blasted through New Mexico this week, spawning tornadoes, forcing a freight train to plunge from the bridge it was crossing, turning semis onto their sides, causing other vehicle crashes and knocking out power for hours in Las Vegas, NM.

At least it was a dry wind.
Posted by Bruce Oksol at 10:23 AM No comments:

Note: in a long note like this there will be typographical and factual errors. If this information is important to you go to the source; in this case, MRO and NDIC.  This is being posted to help me understand the Bakken better and to provide feedback to a reader in the easiest way possible. It also provides another example that I try to maintain reader's anonymity (unless directed otherwise); and, that I try to share information to all readers.

Note: if anyone wants to chime in on this one, feel free. I'm learning as I go along.

Note: I really, really learned a lot on this one. Really appreciated the reader sent this one along. I never would have caught it until the wells came off the confidential list. 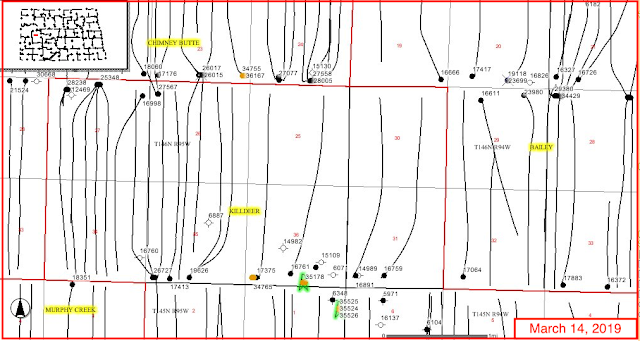 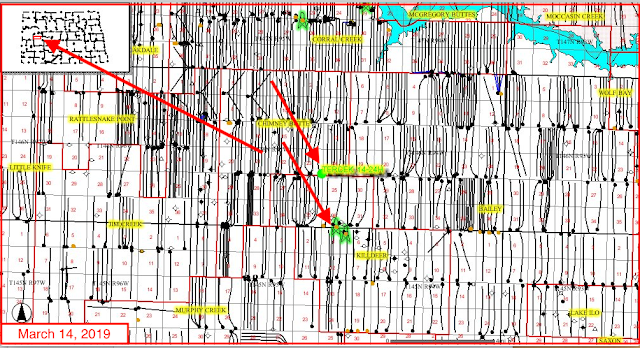 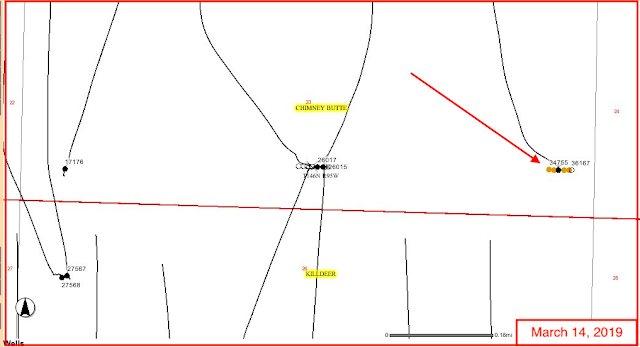 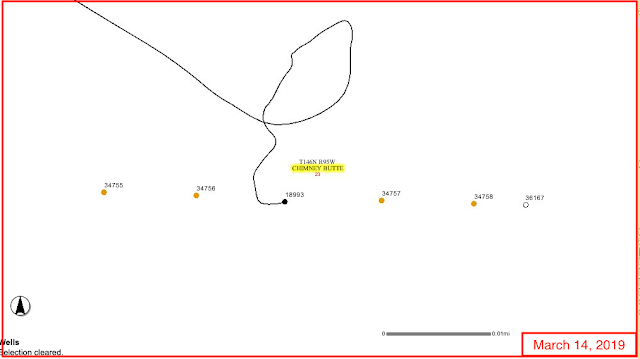 The reader wonders if #34758, reported as plugged/producing sixteen days after being spud, might have encountered problems, in light of fact that it's unusual for a fifth permit to show up "after the fact."

The wells:
Unable to access even basic information when wells are on conf status, but the fact that both #34758 and #36167 have identical numeric descriptions (14-24H) certainly suggests the reader may be correct. Also, the company did not waste any time going forward on this.

FracFocus has not posted any frac data for any of these wells.

Lending credibility to the reader's suggestion that the Meredith well (#36167) is a "replacement well for the Tercek well (#34758), two other observations:

In the permit application:

2. On one of the project details all wells are mentioned but: 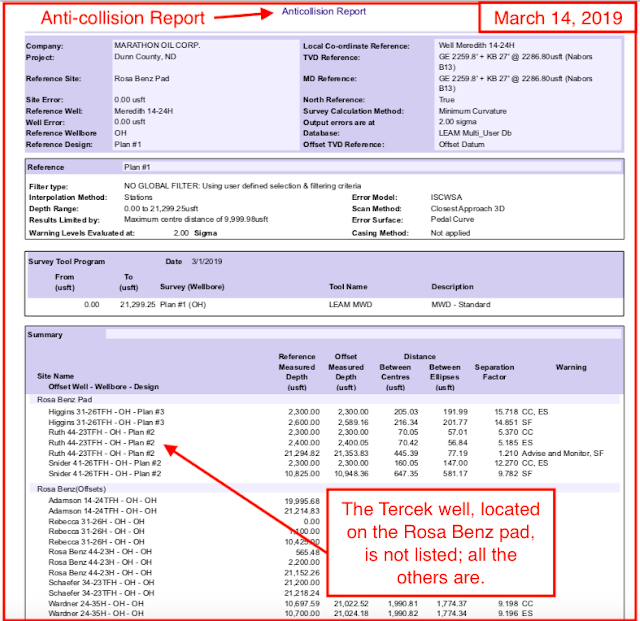 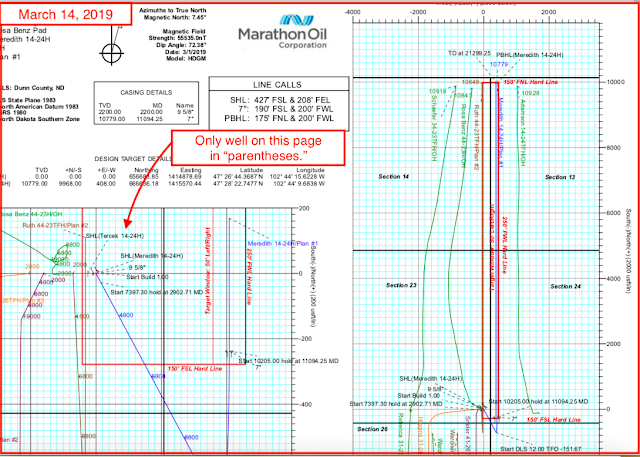 My hunch: the reader is correct. Time will tell.

Later, 8:49 a.m. Central Time: four minutes ago -- I can't make this up -- it's being reported that Tesla has a new accounting chief. See TSLA note in the original post below. This link is at The WSJ, but if you hit a paywall, I'm sure the story is "everywhere."

Disclaimer: this is not an investment site. Do not make any investment decisions based on what you read here or what you think you might have read here.
TSLA: I think the Model Y will be unveiled today but one never knows with Musk Melon. But two things that seem to be true of TSLA: top executives come and go almost weekly; and, roll-outs seem to occur on schedule.

And so it begins:


Russian America was the name of the Russian colonial possessions in North America from 1733 to 1867.

Settlements spanned parts of what are now the U.S. states of California, Alaska and two ports in Hawaii.

Formal incorporation of the possessions by Russia did not take place until the Ukase of 1799 which established a monopoly for the Russian–American Company and also granted the Russian Orthodox Church certain rights in the new possessions.

Many of its possessions were abandoned in the 19th century. In 1867, Russia sold its last remaining possessions to the United States of America for $7.2 million ($129 million in today's terms).

Yes, a new book (for me). It was published in 1910. Tent Life In Siberia: A New Account of An Old Undertaking Among The Koraks and Other Tribes in Kamchatka and Northern Asia, George Kennan, first published in 1910. The softcover edition I have has no information regarding the current publisher; the date of this printing; nothing; it looks like it came from Mr Kennan's home printer. Except that it's in mint condition with glossy cover and all. The first few pages have already piqued my interest.
Posted by Bruce Oksol at 8:47 AM 2 comments:


Producers in the Bakken and the rest of North Dakota flared record volumes of natural gas in the fourth quarter of 2018 — an average of more than 520 MMcf/d, or about 20% of total production — far exceeding the state’s current 12% flaring target. What happened? For one, crude oil production in the play took off; for another, the gas-to-oil ratio at the lease continued to increase. And while some new gas processing capacity came online last year to reduce the need for flaring, the pace of the additions was too slow to keep up with the Bakken’s rising gas output. The good news is that 2019 will bring more incremental processing capacity to North Dakota than any year to date. Today, we discuss recent setbacks on the flaring-control front and the prospects for things getting better later this year.

Bringing gas flaring under control in the Bakken in the Shale Era has been akin to breaking in a wild horse: Just when you start to think you’ve accomplished the task at hand, the bronco’s bucking again and you’re holding on for dear life.

Producers in western North Dakota have been struggling for the better part of this decade to process and pipe out an increasing share of the gas they produce — and to reduce the share of gas they need to flare off. Back in 2011 and again in 2014, as much as 37% of the state’s produced gas was being burned off due to a lack of processing and pipeline takeaway capacity. That spurred the North Dakota Industrial Commission (NDIC) to require producers to file a “gas capture plan” (GCP) with their drilling permits and to put in place flaring limits. The new rules limit flaring to one year after a well’s first production, by which time producers will have to either connect the well to a gas gathering pipeline, cap it, or link it to an electrical generator or a compression or liquefaction system that consumes at least 75% of the gas onsite. Regulators also set targets for reducing the share of produced gas that is burned off statewide: flaring no more than 26% of total gas production by November 2014, 23% by January 2015, 20% by April 2016, 15% by November 2016, 12% by November 2018 and 9% by November 2020.