Original Post
Completely off my radar scope:
The story is here. 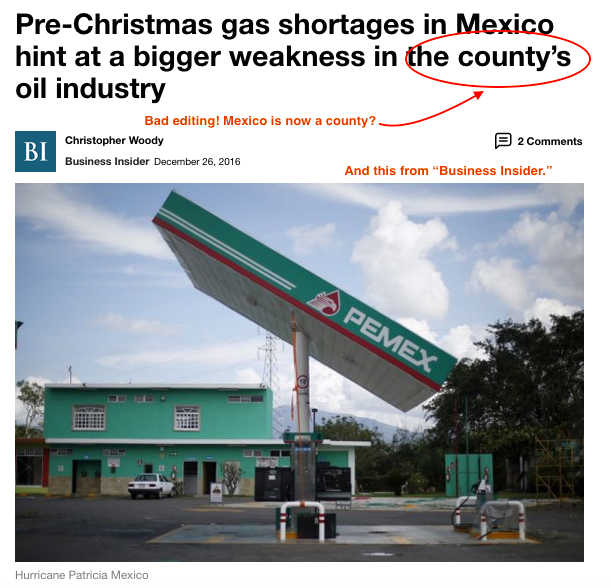 Reminds me of my blog. 😒
Posted by Bruce Oksol at 9:13 PM No comments:

Disclaimer: this is not a dance site. Do not make any jazzercise, zumba, Arthur Murray, or aerobic dance decisions based on anything you see here or think you may have seen here. Likewise, this is not an investment site. Do not make investment, financial, travel, job, or relationship decisions based on anything you read here or think you may have read here. This is an education and entertainment site. But that's not why it was created. Have we gone off the rails yet?

For natural gas addicts: we're still not in a bubble -- SeekingAlpha contributor. This is the reason I'm linking the article. Some definitions:

The four categories of commodity traders discussed in the article above are:

For zumba addicts, put on your wireless Beats or AirPods and turn the volume up high:

I am seriously considering "taking" zumba lessons -- though I don't really think you "take" zumba lessons. You just show up and start dancing. My wife's instructor is Colombian and I've had one evening with her zumba. If I do this: no video. 😎

Obama: "I would have won against Trump."  Whatever. Get back on the golf course.

The odds tonight for the Dallas - Lions game:
A six-point spread?
Posted by Bruce Oksol at 5:49 PM No comments:

Posted by Bruce Oksol at 5:41 PM No comments:

December 27, 2016: the most snow in North Dakota in my lifetime. Predicted by global warmists. This is most recent storm, not totals for the winter. Bismarck, at 12.5 inches, is well down the list. Williston, at 12.0 inches, almost matches Bismarck. My sister Jan and nephew Connor Amtrak to Williston this week; due in today or tomorrow, I believe. It will be interesting to hear what they have to say. The only rumor I've heard is that Rudolph, the red-nosed reindeer, is enjoying another fifteen minutes of fame this holiday season. 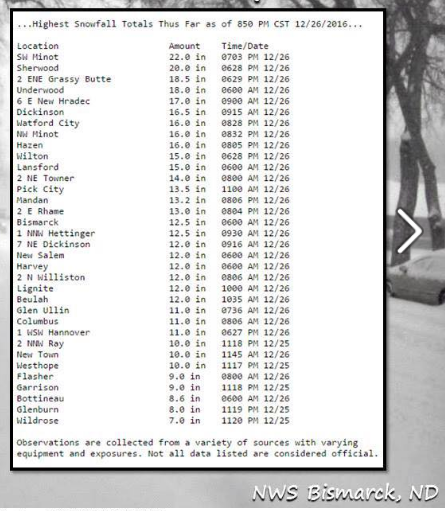 Later, 2:23 p.m. Central Time: my wife, a huge Hillary supporter, and global warmist, asked me where in the world would they put all that ND snow? My reply:


I think they are going to put all the snow in railroad coal cars.

As you know, due to global warming, the country is no longer mining nor shipping coal (coal used to be a big deal for railroads) and now the coal hoppers are completely empty and sitting on rail sidings between Seattle to Boston.

They can put the snow from North Dakota (Williston, Minot, Bismarck, Grand Forks, and Fargo) into all those coal hoppers owned by Warren Buffett (Burlington Northern Railroad) and ship it to the Kennedy clan in Boston.

As you know, some years ago, Patrick Kennedy famously said he was sad that his kids would grow up never seeing snow (because of global warming).

Shipping the snow back to Boston will: a) get the snow out of ND; b) provide a lot of great paying jobs for BNSF employees; c) make Warren Buffett rich(er), which is good great for our portfolio; and, d) will put a smile on the faces of all those Kennedy kids.

I will pay dearly for that blasphemous reply, but it was worth it. 😅

From The Williston Herald (great photo at the link):

Almost exactly 1 foot of snow fell between Christmas and Monday in Williston, according to the National Weather Service in Bismarck.

That left the town looking like a winter wonderland — as long as people didn’t have to go anywhere. High winds, including gusts of nearly 50 mph Sunday night, caused massive drifts to pile up, making travel difficult and, in some places, practically impossible.

Original Post
When I was five or six or seven years of age, I remember vividly the huge piles of snow we had in Williston. I remember the huge snow forts we built right out on the street at the intersection of 8th Avenue West and 17th Street North, about as far to the edge of Williston at the time. It's now in the center of "new" Williston.

Then in my high school years, not much snow. Snowmobilers had a tough time finding time finding any snow; it was even tough for me to find much snow to test my 1947 Willys jeep, my first "car."

It appears things have changed remarkably. It appears North Dakota is getting more snow than ever. It's being reported that Bismarck (think DAPL) just received 12 inches of snow in the most recent storm (Decima?). 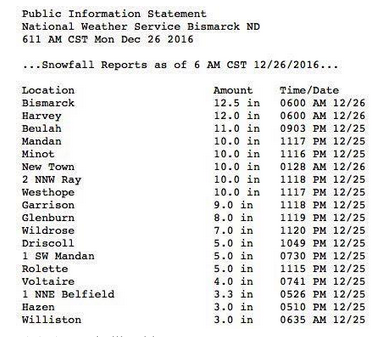 Don tells me this is the third or fourth such snowstorm since November of this year. For newbies, New Town and Ray are in the heart of the Bakken.

And this is why the new airport in Williston is critical. It will be needed for the Kennedy clan to fly in once they discover yet another location where they can show their grandkids the last bit of snow before global warming does us all in.

More likely, it's very possible, we could see Air Force 1 with President Trump aboard landing at Williston's new airport for a photo op.

I hurriedly read Henry Beston's The Outermost House, so I could read the biography of Henry Beston which was just published in November, 2016.

The Outermost House is a beach book; it was a pleasant memoir of the author's twelve months in a small house he built on the eastern bank of Cape Cod, near Eastham, just north of the elbow. His house on the cape was proclaimed a National Literary Landmark in 1964. The cover of the softcover that I read said it was the 75th Anniversary Edition. Its first copyright was 1928. I doubt many will enjoy the book; I'm certainly not recommending it. But I loved it.

I'm sure the reason this book has lasted this long is because all the Cape Codders needed something to read to while their days away on the beach. This would be the book (among many others, I assume). I assume this book is a bestseller at the Yellow Umbrella bookstore in Chatham.

Now that I've read it once, I will read it again. It's as much a birder's book as anything else.

I know I won't do it, but I have a romantic notion to spend more time on Cape Cod. Arianna and Olivia hardly need me now; in five years they won't need me at all. Sophia and I need each other and are joined at the hips, but this, too, will last only four or five more years. In ten years she will be Arianna's age and we will both go our separate ways.

2022, I will be older than I am now. If my health holds out I will still be young enough to live on my own in a little pied-a-terre for a year. If the economy is such in 2022 that I could afford, who knows?

I wish Beston had included an index of the birds he mentioned in The Outermost House. That will be a project for me over the next few weeks. It will be interesting if he mentions the piping plover. The piping plover is to Cape Cod what the sage grouse is to Wyoming. Despite a gazillion dollars and decades of effort to save these two species, it seems it may just not be in the cards. But elk and buffalo are doing incredibly well on the Great Plains.
Posted by Bruce Oksol at 9:43 AM No comments: 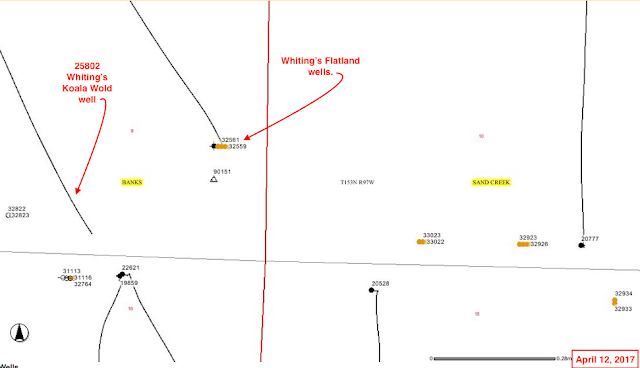 August 13, 2019: production data updated; all "original" wells have been completed except for two newer ones still TATD.

December 31, 2017: the CLR Monroe wells in Banks oil field have been updated; a couple of them are in the "50K club." An updated graphic: 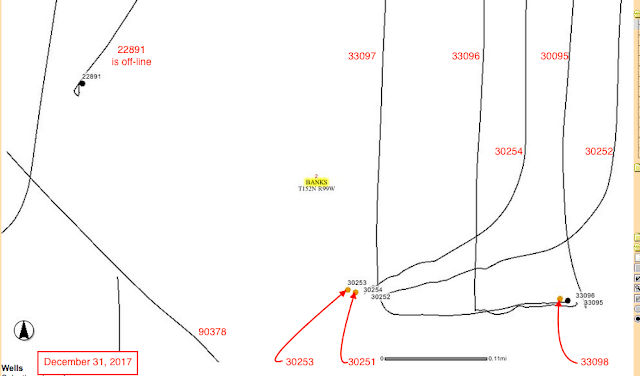 Original Post
A reader asked about these wells:
From a July 25, 2016, sundry form for one of the wells (#23792) from CLR: "The well will be completed once commodity prices improve to a point where it is economic to do so."

Other wells sited in this section:
Running into this section from the south:
The Banks oil field is (and is going to be) an incredible oil field. CLR, Oasis, Statoil, and Whiting all have a significant presence in this field. It will be interesting to compare their wells over time.

Quick comment: the Monroe wells look to be very good wells; with new completion techniques one assumes they will be even better. 😃 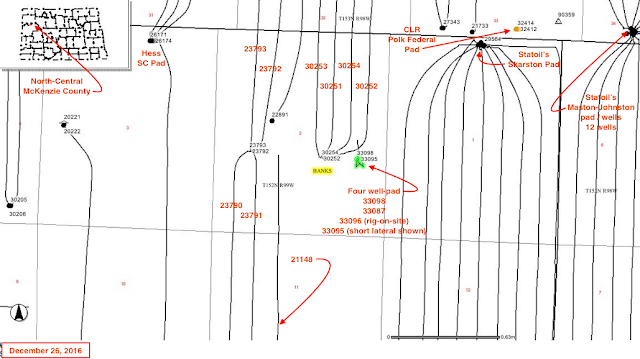 This is a link to an old article sent in by a reader. The story is from The [London] Telegraph four years ago, December 30, 2012. It has to do with wind farms, wind turbines, and economics. Data points:
Much more at the link.

The SEC meanwhile is going after Exxon for the way it values its reserves.

Not holding my breath.

China has announced it will start paying less for renewable energy in light of decreased costs to install renewable energy projects. Bloomberg is reporting that China will cut tariffs by nearly 20% in 2017 for solar energy, and 15% for wind energy.

I was looking for something else on the blog when I ran across this old post, which reminded me of a more recent post:
It started out as a trickle, but more and more media outlets are re-posting the story: there is a small, but influential, group of investors (these articles call them "speculators" placing bets (making investments) based on possibility of $100-oil as early as 2018. When I get around to it, I will post a link but that's not on my list of things to do this morning.
Posted by Bruce Oksol at 7:47 AM No comments: