Enbridge’s proposed Northern Gateway plan is, at least for now, dead in the water after Prime Minister Justin Trudeau released a letter of instruction Friday telling his transport minister to ban oil tanker traffic on British Columbia’s north coast.
A ban would prevent hundreds of tankers each year from carrying diluted bitumen extracted from Alberta’s oilsands and piped to northern B.C. from being shipped for export overseas.
“It will mean that Northern Gateway will never happen,” said Gerald Graham, a Victoria consultant specializing in oil spills for more than 40 years.

The $6.5 billion, 1,177-km twin pipeline proposed by Enbridge Corp. would carry blended bitumen from Alberta to a terminal at Kitimat, BC, and return diluent to Alberta.

TransCanada also has proposed a project called Energy East, which would link the oil sands with eastern Canadian provinces and the Atlantic.

This pretty much indicates the direction Barack Trudeau will take with regard to Canada's oil and gas industry.

I can't recall if I've blogged about McDonald's -- whether I have or not, I'm not going to cover that ground again. Suffice it to say, their coffee is good and at 50 cents for a senior cup, the price is perfect.

What's important are the comments at the linked site. A common theme is the poor service, the condition of their restaurants, and the fact that most employees speak two languages, neither of which is English. There are some exceptions in the local area, but overall as I travel across the US, I am very unimpressed with their employees. And that's their problem. People go there as a last resort. I go there because I'm guaranteed 50-cent coffee and wi-fi.
Posted by Bruce Oksol at 8:28 PM No comments:


The company's utility group expects to grow its rate base approximately 7 percent annually over the next five years on a compound basis. This growth projection is on a much larger base, having grown rate base at a record pace of 10 percent compounded annually over the past five-year period. Although the company has assumed slower growth in the Bakken region of North Dakota, the utility group is spread across eight states where customer growth is expected to be higher than the national average. This customer growth along with system upgrades and replacements needed to supply safe and reliable service will require investments in new electric generation and transmission and electric and natural gas distribution. In addition, while the company is among the lowest-priced power providers in the country, the EPA's recently published Clean Power Plan could require additional investment that would be incremental to the company's five-year capital expenditures forecast.

The capital investment program at the pipeline and energy services business reflects organic growth projects and includes a pipeline project to serve eastern North Dakota later in the five-year timeframe. The group is focused on improving existing operations and accelerating growth in its current markets while evaluating expansion into other basins. Potential acquisitions would be incremental to the five-year capital investment program. Capital expenditures pertaining to a second refinery have been removed from the forecast as the company focuses on optimizing its current refinery investment.

At the company's construction businesses, the capital expenditures forecast is focused primarily on organic expansion opportunities. In addition, operating leases for equipment upgrades are being utilized and supplement the capital program. The group continues to evaluate opportunities for merger and acquisition growth. While acquisition capital was included in last year's capital forecast, the new forecast does not include potential acquisitions, but rather any acquisitions would be in addition to the projected capital investments. The construction materials business has momentum with improving markets and a lower cost structure, and adjusted earnings are 80 percent higher year-to-date from a year ago.

Regular readers know my opinion on the US Strategic Petroleum Reserve: no longer necessary. I just posted that over the weekend again, time to sell off the US SPR. 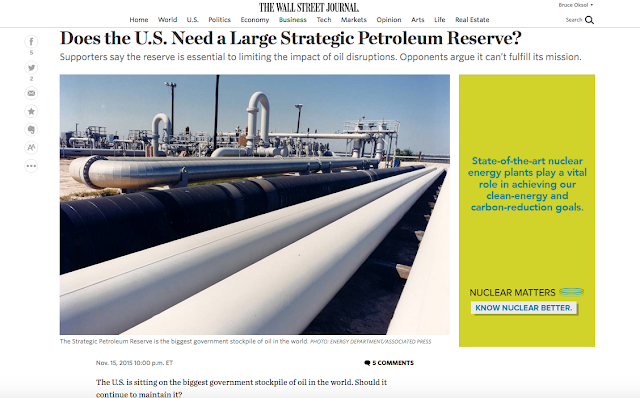 I have no reason why The Wall Street Journal would feel compelled to use the word "large" in that headline. No SPR is needed.
Posted by Bruce Oksol at 12:35 PM No comments: 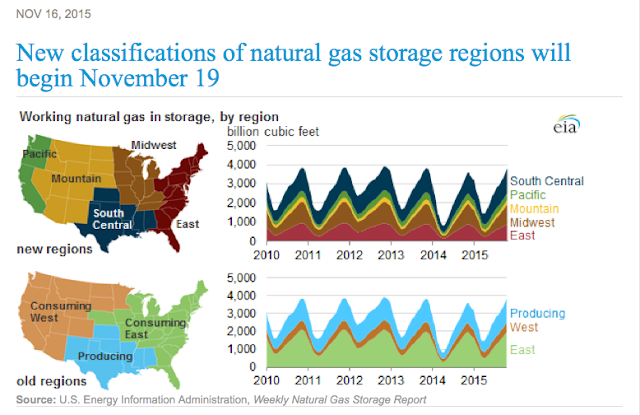 Tim Cook says he has no plans to merge the "tablet" with the "laptop." That is what Microsoft did with the Surface.

It's interesting to read the comments. My knee-jerk reaction was to agree with Tim: the tablet and the laptop (or the tablet and the PC) are two different animals, and trying to merge them into one will result in a less satisfying experience.

I am sitting here, working on my MacBook Air, doing things I cannot do on an iPad (certainly not easily). My workhorse is the MacBook Air. But I do occasionally use my iPad but not very much any more.

However, if I could have this very same MacBook Air experience, and then when I'm done, and ready to go out for coffee, and just remove the "monitor" -- i.e., the tablet, that would be awesome. Most folks know that Apple users can partition their Apple computers to run on Apple OS as well as on a PC operating system. There should be no reason that when the monitor is attached to the MacBook Air keyboard it runs the standard Apple Mac OS, but when the monitor comes off, it flips to Apple mobile OS.

Imagine how much more capability the complete system would have. One would have battery power in the monitor (the tablet) as well as in the MacBook Air keyboard. There would be memory in each half -- both RAM and flash.

My hunch is that Apple engineers are already working this issue, and some day we will have a tablet that remains a 100% tablet when standing along, but then becomes a simple monitor when plugged into the MacBook Air keyboard.


My 409, The Beach Boys and Junior Brown


Permian Basin crude production more than doubled since 2011 to reach nearly 2 MMb/d today, but that rate of increase has leveled off since prices crashed last year. Meantime 750Mb/d of long-haul pipeline takeaway capacity came online in the first half of 2015 - greatly exceeding today’s take-away requirements. And there is more to come next year when the 470 Mb/d Enterprise Midland-to-Sealy pipeline is expected online – leading to fears regional pipeline infrastructure is overbuilt. How about inside the Permian Basin? Today we start a series reviewing Permian gathering system build out.

In theory – if there is no congestion on pipelines between Midland and Cushing, the crude price differential between the two points (Cushing minus Midland) should equal the cost of transportation or less than $1/Bbl (depending on shipper commitments). And that is the way the differential traded for years before Permian crude production took off in 2011 after producers applied shale drilling technologies in the basin. Since then crude output in the region has more than doubled – reaching close to 2 MMb/d in July 2015 according to the Energy Information Administration (EIA) drilling productivity report.

Increasing production put pressure on crude takeaway capacity from the region as midstream companies scrambled to keep up with soaring output. When production exceeded takeaway capacity, producers had to accept discounted prices to get their barrels onto busy pipelines – causing prices at Midland to dip well below Cushing. Then as new pipelines came online the pressure was relieved and the differential narrowed. Over the summer we saw Midland prices at a rare premium to Cushing when a spate of new pipelines came online together creating the opposite of congestion – a shortage of crude - when shippers could not source enough barrels to meet their commitments to the new pipelines and bid up the price at Midland above Cushing. In the last month that situation has reversed again as refinery maintenance in the Permian Basin has freed up barrels at Midland. Between October 2, 2015 and last Friday (November 13, 2015) WTI Midland once again traded under Cushing – by an average of $0.57/Bbl.


Just outside the southwest border of Beijing, a new coal-fired power and heating plant is rising in Dongxianpo, a rural town in Hebei Province. Cement mixers roll onto the site. Cranes tower above a landscape of metal girders.

When finished, the plant, run by a company owned by the Beijing government, is expected to have a generating capacity of 700 megawatts of power, more than the total of similar plants in Ohio. But whether it will actually be used to its fullest is questionable, despite the investment of $580 million.

That is because the plant is scheduled to come online in three years amid a glut of coal-fired power plants — an astounding 155 planned projects received a permit this year alone, with total capacity equal to nearly 40 percent of operational coal power plants in the United States.

China’s economic slowdown and the government’s pledges to use more renewable and nuclear energy make some of the country’s existing plants and most or all of the 155 new ones unnecessary, according to interviews with officials and scholars, a review of public statistics and a report released Wednesday about the “coal power bubble” by Greenpeace East Asia. There are already too many plants, as shown by a steady decline in the plants’ average operating hours since 2013.

The construction boom — with capital costs estimated by Greenpeace at $74 billion — is a clear sign that China remains entrenched in investment-driven growth, despite promises by leaders to transform the economic model to one based on consumer spending.

It also raises questions about whether China is weaning itself from coal as quickly as it can and whether officials are sufficiently supporting nonfossil fuel sources over coal, which is championed by some state-owned enterprises. China is the biggest emitter of greenhouse gases in the world and the main driver of climate change, and it has some of the worst air pollution.

Conflict within the system is rising. Renewable-energy interests — wind, solar and hydropower — are pushing back against coal-fired power plants, which have 40-year life spans. They say the rising number of coal plants prevents other energy sources from selling electricity on the grid and attracting more investment. They want the government to move faster with its promised “green dispatch,” giving priority to low-carbon electricity sources.

By the way, this allows China to come up with huge reductions of carbon emissions in the out-years -- all fake numbers, of course.  If they define the baseline as the "potential" CO2 emission of all these coal plants -- built or not built -- and then measure "actual" CO2 emissions, the delta will be so big, China will have bragging rights to the largest decrease in CO2 emissions in the entire universe.
Posted by Bruce Oksol at 6:46 AM No comments: