May 14, 2019: Pemex secures $8 billion loan to avoid junk status. The loan was mentioned in the story below, but the reason not given, until now.

Is this guy nuts or what? He's starting to make Occasional-Cortex look like a "financial Einstein."

If I understand this correctly, the new Mexican president doesn't want "private sector" help on the country's new $8 billion refinery. He wants the state oil company, Pemex, to do it without private sector expertise.

Going it alone -- without expertise -- will increase the cost of the new refinery by $2 billion to $4 billion. This according to Reuters.


Petroleos Mexicanos, or Pemex, is already the most indebted oil company in the world, and has been hemorrhaging cash for years—even in the days of $100 oil.

Earlier today, Mexico Daily News reported that three banks were extending an $8 billion loan to Pemex to add to its heavy debt burden, which is already more than $100 billion, from oilprice.

Remember, this is the same guy that shut down construction of a badly needed new airport for Mexico City due to high costs.  But did anyone catch this?

But the president is facing heavy criticism over the plans, after cancelling a multibillion-dollar airport project that was almost halfway complete.

López Obrador promised the new Felipe Ángeles airport northeast of the capital won't exceed its budget and will save the government money even with the cancellation of the partially built airport.

The new airport — named for a general allied with revolutionary icon Pancho Villa — is at the Santa Lucia military air base and the army is in charge of getting it built for $4.1 billion.

It is supposed to begin operating in mid-2021, though construction has not yet begun.
Two new runways would be added to its existing one and the commercial airport would share the space with the military.

Critics have argued that the new airport will have difficulty operating simultaneously with the existing airport, but in a report by the military, consultant Navblue said they could operate simultaneously in terms of air space.

Mexico's foreign exchange reserves are in incredibly good shape, so no worries.
Posted by Bruce Oksol at 10:22 PM No comments:

Disclaimer: in a long note like this there will be typographical and factual errors. In addition, it was done in a busy, noisy environment increasing the odds of mistakes. I am inappropriately exuberant about the Bakken and may be seeing things that do not exist. If this is important to you, go to the source.

The well, see this post:
Note: one of the more interesting things about this well -- the frack/completion was relatively modest. Instead of moving to 60 stages (and even higher), MRO stuck with 45 stages. Instead of a huge 15 million lbs (or even 20 million lbs used in some huge fracks), this was a very modest 6.1 million lbs -- very modest.

Note: this is a Three Forks first bench well. For newbies:


The calculations:
From the FAQ page:


Whether this is a record 30-day IP we will not be know until a couple of months from now. The 24-hour IP ranks up there as one of the top ten, I'm sure. 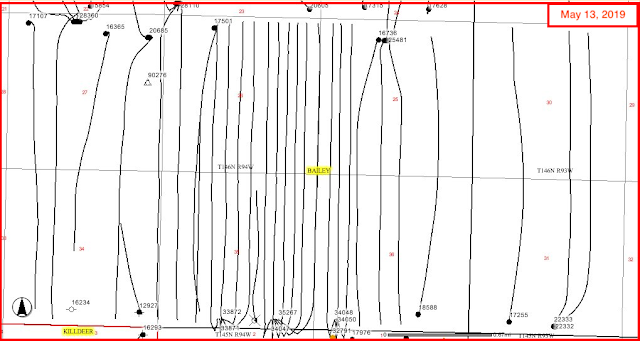 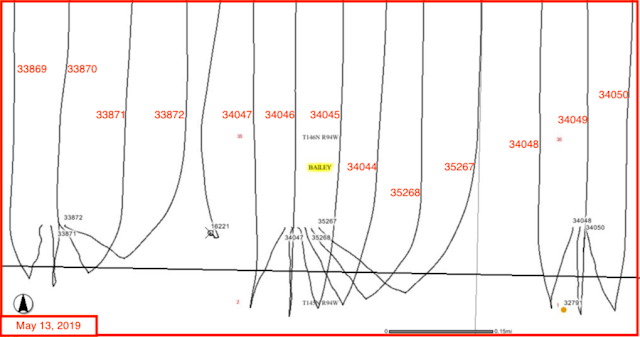 Email ThisBlogThis!Share to TwitterShare to FacebookShare to Pinterest
Labels: RecordIP

Fake news: from oilprice.com earlier today --oil prices jumped on Monday on news that two Saudi oil tankers were supposedly attacked near the Persian Gulf, raising fears that supply may be at risk. In fact, WTI dropped 1.01%, trading barely above $61 at close of business today. Brent was down 0.55%. So much for hostilities in the Mideast -- at least today. Tomorrow is another day, to coin a phrase.

Mideast, California, Venezuela, China, Mueller, Schiff -- just some of the reasons to take the day off. Good luck to all.
Posted by Bruce Oksol at 8:53 AM No comments:

Only Three Wells Coming Off Confidential List Over The Weekend, Monday -- May 13, 2019

Wells coming off the confidential list this weekend, Monday --


RBN Energy: crude oil and NGL export challenges at the Port of Houston.


The Houston Ship Channel (HSC) is one of the busiest shipping lanes in the U.S. Each year, thousands of vessels utilize the waterway, importing and exporting goods ranging from pharmaceutical products to what the Census Bureau classifies as “Leather Art; Saddlery Etc.; Handbags Etc.; Gut Art”. More to the point of today’s blog: over 10 million tons of energy products move through the channel each month. But as ships grow ever larger, the ports and canals that service them must also adapt to be able to handle their increased dimensions. The Houston Ship Channel now finds itself in a situation where it must adapt to meet increasing market demands. Today, we continue our series on the issues facing some Texas ports and the measures being taken to help alleviate them.