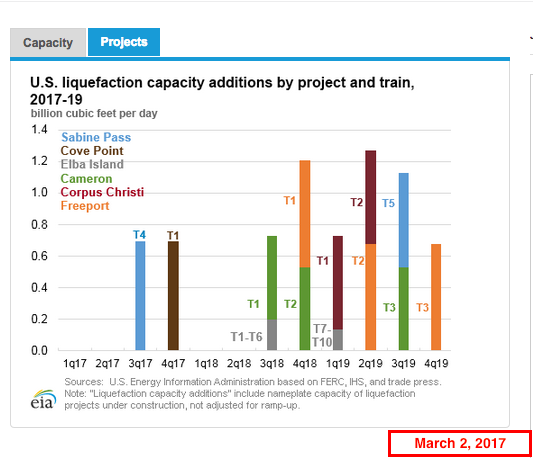 August 31, 2020: contractor to resume construction at Sabine Pass' Train 6 and the Third Berth project following Hurricane Laura one week ago.

September 9, 2019: behind schedule? In the graphic above, EIA shows Cameron to have "T3" by 3Q19. A couple of weeks ago, SRE announced that the first train of the Cameron LNG liquefaction-export project had initiated service, located in Hackberry, LA. The article does confirm that the Cameron facility will have three trains. It's hard to say from the story, but it sounds like the capacity of all three trains combined is 12 million tonnes per annum of LNG, or nearly 1.7 billion cubic feet per day. Conversion at this site.

September 4, 2019: Cheniere declares 2nd train at CC completed; this marks Cheniere's 7th train at CC and Sabine Pass; a 3rd train at CC under construction; estimated completion, 2H21; at Sabine Pass, Cheniere has announced it will build a sixth train. Total now projected: 9. Note: in the graphic above only five trains were projected as of 3Q19.

June 3, 2019: Cheniere to add 6th train at Sabine Pass, Louisiana. Note: in the graphic above only five trains were projected as of 3Q19.

May 30, 2019: of all the proposals in the original list, the most prominent one likely not to proceed any time soon is the G2 LNG proposal for a liquefaction/LNG export facility; up to 14 MTPA; Cameron Parish; according to a 2019 - 2010 Louisiana Economic Outlook white paper.

May 30, 2019: update on the Rio Grande LNG project at this post; this project was on the original list (scroll down).

May 29, 2019: three new LNG export facilities near New Orleans, LA; Venture Global; two of the three were in the original list below;

May 6, 2019: update -- Sempra's Port Arthur LNG wins federal "okay" to start exports. SeekingAlpha -- can export to countries that don't have a free trade agreement with the US; SRE can export almost 2 billion cfpd; two liquefaction trains. SRE to make FID later this year. 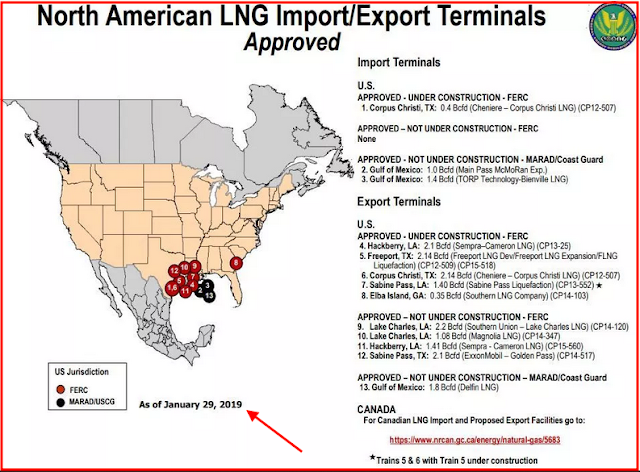 April 16, 2019: SRE's Cameron LNG has begun pipeline feed gas flow to the first liquefaction train of the liquefaction-export project as it prepares to begin production of liquefied natural gas (LNG) at the facility in Hackberry, La. This is the final commissioning step for Train 1 of Cameron LNG Phase 1.

August 14, 2018: Cheniere ready to fire up its second LNG export terminal; Corpus Christi; will be country's third export terminal; many others under construction. If you add up the capacity in the graph above dated March 2, 2017, it adds up to 7.1 Bcf/day. Now, Platts estimates 4 Bcf/day by the end of the year (2018) and 8 Bcf/day by the end of 2019.

November 21, 2017: Tellurian will build a 20 train LNG facility on Lake Charles for $15 billion ... half the historical price for these plants. The LNG project is the Driftwood, being built by Bechtel.

November 4, 2017: Dominion's Cove Point should be up and running this week.

May 6, 2017: update. Texans for Natural Gas said in a report that seven LNG export projects proposed or under construction in the state could raise $20 billion or more in tax revenue, create more than 135,000 jobs and have a total economic impact of roughly $145 billion.

January 28, 2017: Exelon has applied for an LNG export facility permit for Brownsville, TX.


Original Post
The list of US LNG export projects at various points along the regulatory process, as reported by RBN Energy. First, Louisiana, mostly near Lake Charles:
Now, Texas:
In other states:
Bottom line: