U.S. energy-related carbon dioxide (CO2) emissions totaled 2,530 million metric tons in the first six months of 2016. This was the lowest emissions level for the first six months of the year since 1991, as mild weather and changes in the fuels used to generate electricity contributed to the decline in energy-related emissions. EIA’s Short-Term Energy Outlook projects that energy-associated CO2 emissions will fall to 5,179 million metric tons in 2016, the lowest annual level since 1992. --- EIA

"Changes in the fuels used to generate electricity" ... just couldn't bring themselves to mention natural gas and the shale revolution.

Same for Rockefeller: folks just can't give him credit for "saving the whales."

US job openings fall to eight-month low in August. Over at Reuters, buried in the story:


Job growth is slowing, with nonfarm payrolls increasing 156,000 in September. Employment growth has so far this year averaged 178,000 jobs per month, down from an average gain of 229,000 positions per month in 2015.

Data points:
Translation: Clinton = more ObamaNomics = more taxes = ObamaCare 2.0 (HillaryCare -- the new motto: "If you like your ObamaCare plan, you can't keep it. You will  have to accept the HillaryCare plan. She has already chosen the plan that fits you best."

If the US ordered all US citizens out of Libya, what would be your first thought? I thought so.

Now, what would be your first thought be if Russia ordered all of its students studying abroad to return home immediately?

"We Didn’t Know Things Were This Bad" - Ericsson Shares Plunge 17% After Shocking Profit Warning -- over at ZeroHedge. Ericcson's products are listed here. 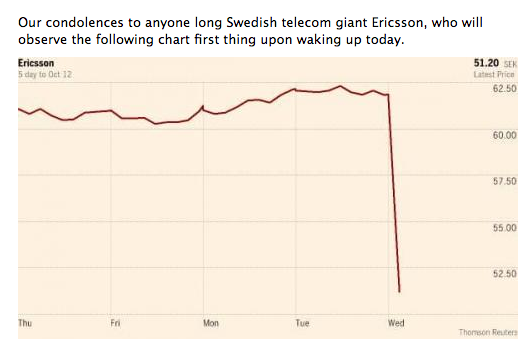 NYSE:
Early trading: despite the graph above for Ericcson, the Dow 30 is flat, down about 2 points in early trading. AAPL holds its gains and is up a bit. XLNX is having a tough few days; recent analyst downgrade.