Link here. "We" should have the least expensive energy in the country but due to crazy reliance on wind: Texas power prices jump to record as heat bakes state.

And "we" have seven more days of this.

And I love it.

From the linked Reuters article:


Spot power prices in Texas soared to a record high for Thursday as consumers cranked up their air conditioners to escape another brutal heat wave.

Temperatures in Houston were expected to hit 99 degrees Fahrenheit on Thursday and 100 or more through Sunday before easing to the mid-90s next week.

The combination of heat and humidity will make it feel more like 108 F in Houston Thursday afternoon and above 110 over the weekend. The normal high in the city at this time of year is 92 degrees.

Next-day power prices at the ERCOT North hub soared from $130 per megawatt hour  for Wednesday to an all-time high of $973.75 for Thursday.

That tops the previous record of $751 on Aug. 15 during the last heat wave to hit the state.

I think Texas has more wind energy than any other state. And even so, the wind farms couldn't keep up with demand.
Posted by Bruce Oksol at 9:32 PM No comments:

Kernza -- North Dakota Just Keeps Getting Better -- Saving The Planet -- One Wheatfield At A Time -- September 5, 2019


Kernza is a brand of forage grass called intermediate wheatgrass. It is is in the embryonic stages of development, with an intent toward commercialization, with uses including making bread, pasta and beer.

Kernza, a trademark name for a crop developed at Salina, Kan., by the Land Institute, a group founded in 1976 to develop perennial grains, pulses and oilseeds. The history goes back to the 1980s with the Rodale Institute in Pennsylvania. Kernza research and production has been tried from Kansas to Minnesota in the past several years.


Kernza — a perennial grain crop that is under development in the Upper Great Plains — will be featured players in a field day, from 9 a.m. to noon, Sept. 26, at the Williston Research Extension Center. Clair Keene, an Extension specialist with the WREC is offering the North Dakota's first research field day on the crop. Keene started the first research site during fall 2018.

And then like the Bakken, the dreaded decline rate:


Keene says it's difficult to talk about yields because part of the raw weight is the hull. Fernholz says older varieties produce 200 to 500 pounds of seed per acre. That translates roughly up to 30 bushels per acre, Fernholz says. Kernza typically produces its best yields in its first three years of production and then production declines "significantly," Fernholz says.Older varieties are more vulnerable to shattering. Kernels are one-eighth to one-quarter the size of a spring wheat kernel.

And again, we don't get the full story. How does that 30 bushels/acre of Kernza compare to current North Dakota wheat?

I assume when promoting something, there's a bit of hyperbole, suggesting that 30 bushels of Kernza/acre is on the high side and not the average, and it's in very, very controlled studies.

The company said it has 6,000 boxes of the cereal available, with proceeds from the fundraiser going toward The Land Institute to further research on Kernza, a perennial grain that is a wild relative of annual wheat.

The decision to limit the cereal’s production run and launch the web site comes after Cascadian Farm in 2017 committed to developing a cereal or snack product made with Kernza due to its flavor profile and potential to positively impact the climate. Kernza is described as a sweet, nutty grain.

But the company soon encountered challenges. Maria Carolina Comings, marketing director for Cascadian Farm, pointed out in an April podcast that Kernza takes two years to grow. Over the past two years, the company encountered many factors that impacted the yield, and there were some issues after harvest that affected the available supply of organic Kernza.

According to Cascadian Farm there are 1,200 acres of Kernza perennial grain in production, and the yields are relatively small — about one-quarter that of annual wheat. 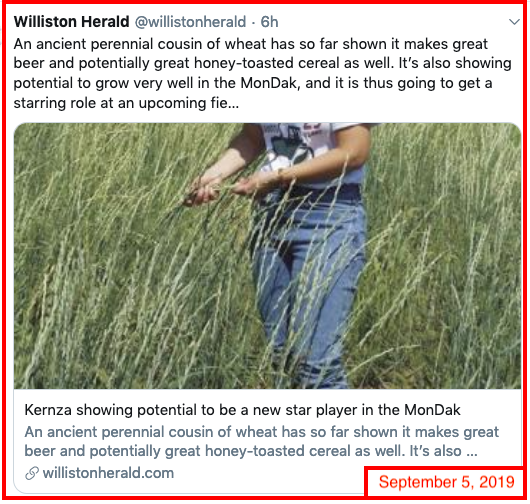 Why does one get the feeling that this was a "commercial" disguised as a news story? I saw this all the time as editor of a college newspaper. 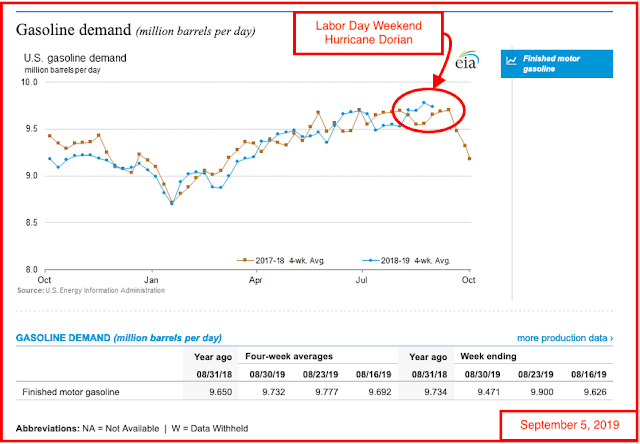 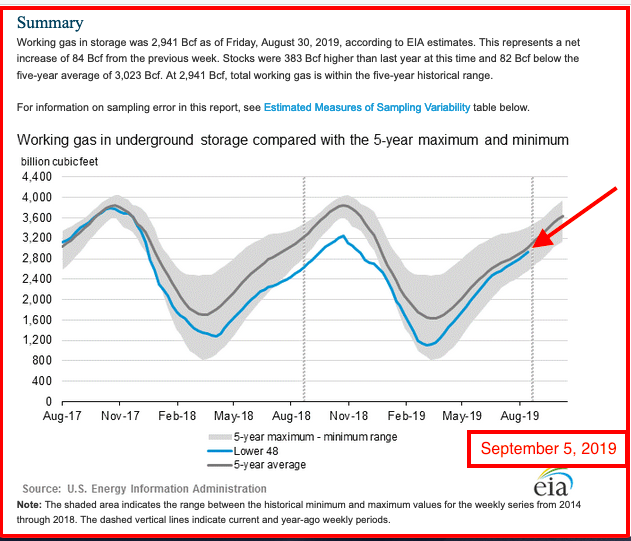 Thursday Night Lights! Link here. Texas high school football! El Paso Eastwood High School at Plano Senior High. In Texas tonight, this is bigger than Green Bay / Chicago. LOL. This is huge. On prime time television, ABC. This is why I got to Texas as fast as I could on my way to retirement. Wow, it doesn't get any better than this. At The Star in Frisco. Jerry's house. Playing at a neutral field. It is awesome to hear local announcers providing pre-game coverage on national television. This is really amazing. Jerry Jones, Dallas Cowboys, offered his stadium for the game. Yeah, it's that big.

The last Oasis Petroleum presentation I posted at the blog was back in May, 2019. It's possible I've posted a newer one since then, but if I have, I've forgotten.

So, here's a look at the August, 2019, corporate presentation for Oasis Petroleum. Link here.

Disclaimer: this was done quickly. Some charts hard to interpret without the narrative. There will by typographical and factual errors. If this is important to you, go to the source. This was posted just to help me compare the Bakken with the Delaware (Permian)

Net acres
Gross operated top tier inventory:
Rigs in 2019:
YTD production (boepd)
Costs (hard to be sure if I'm reading slide correctly but if I am):
Completions:
Free cash flow:
Operations -- Bakken (to make sense of this, one needs to see the map at the presentation):
Breakeven prices below $45 WTI
Production per 1,000 feet of lateral:
Comparing Oasis with 15 peers in the Bakken:
Fracking: focus on increasing frack entry points

Other:
Production per well in Delaware, slide 12:

The Halliday wells in Werner oil field and Wolf Bay oil field have been completed. These are some very nice wells. Then look how far east they are. These wells are tracked here.

And, of course, of the two dozen wells or so at the linked site, this one caught my attention:

Doomsday: this is not really a "big box store" story, but ... over at this site, I track the demise of the "big box store / brick-and-mortar."

This well was first drilled/completed back in 2011. By 9/18, it should have been in terminal decline.

The well:
Production of interest: