Boom. US factories can't keep up. This is an incredible story over at The WSJ. Some excerpts:

Half million Covid deaths, on Biden's watch. Actually, a lot of those deaths under the previous administration, but it is what it is.

Posted by Bruce Oksol at 5:01 PM No comments:

Tesla: Tesla's least expensive version of its Model Y is no longer available. Unlike the Model T, these cars are not made for the average man. 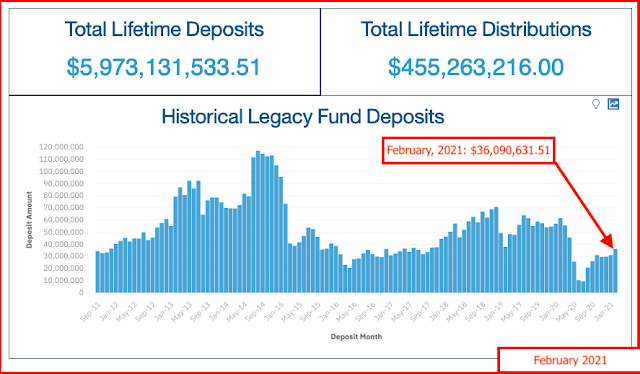 If I were still adding books to my library, I would probably buy Bettany Hughes' Venus and Aphrodite, 2021. I very much enjoyed her book on Helen of Troy; very well written and great vocabulary-builder.

Link here to WSJ review. My hunch is that Bettany Hughes covers a lot of the same ground as she did in Helen of Troy but it is likely filled with cocktail trivia.

When our public library opens again, I may take a look.

Links to Bettany Hughes over at my literature blog:

LONDON, Feb. 22, 2021 /PRNewswire/ -- S&P Global Platts (“Platts”), the leading independent provider of information and benchmark prices for the commodities and energy markets, announced that it will reflect WTI Midland in Dated Brent and its related components, and that the benchmark complex will be amended to a delivered Rotterdam basis. These changes, which include Cash BFOE (Brent/Ninan Blend, Forties, Oseberg, Ekofisk, Troll and WTI Midland) will become effective from July 2022 cargo deliveries.

Vera Blei, Head of Oil Markets Price Reporting, S&P Global Platts said: “Following extensive feedback and engagement with market participants, we are pleased to announce this important decision as part of our active stewardship of Dated Brent, which is the world’s most important oil benchmark. During the consultation, we heard widespread support on the addition of WTI Midland to the basket of crudes reflected in Dated Brent and for keeping strong connectivity to the forward Cash BFOE contract. We have also acted on strong feedback supporting a simplified fully delivered CIF assessment method that will better reflect the evolution of flows into Northwest Europe. These changes provide significant additional volume and will ensure the continued robustness of the Brent complex for the next decade and beyond.” 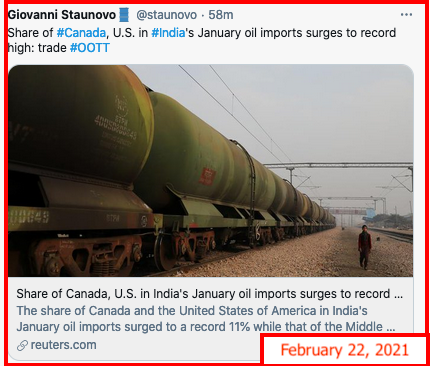 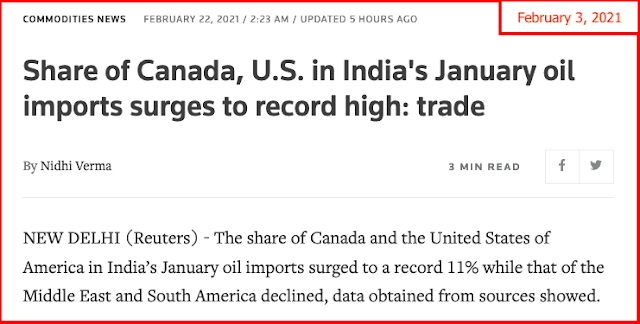 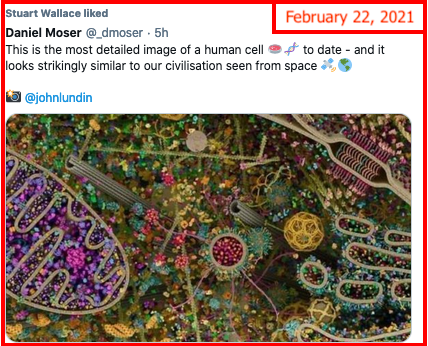 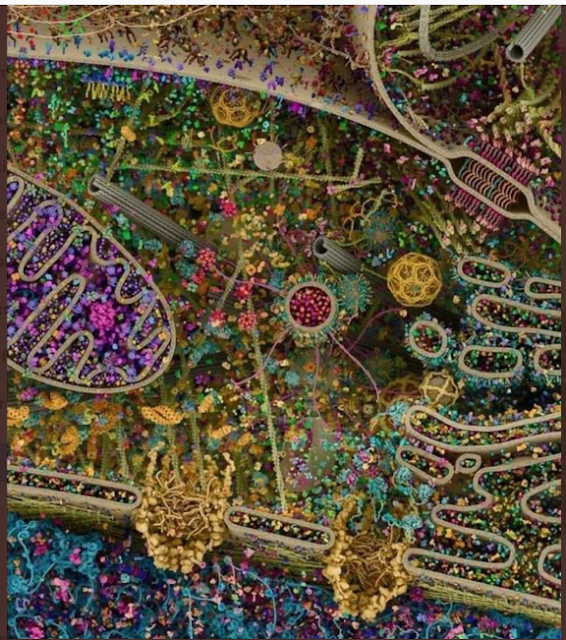 Did you all notice this? 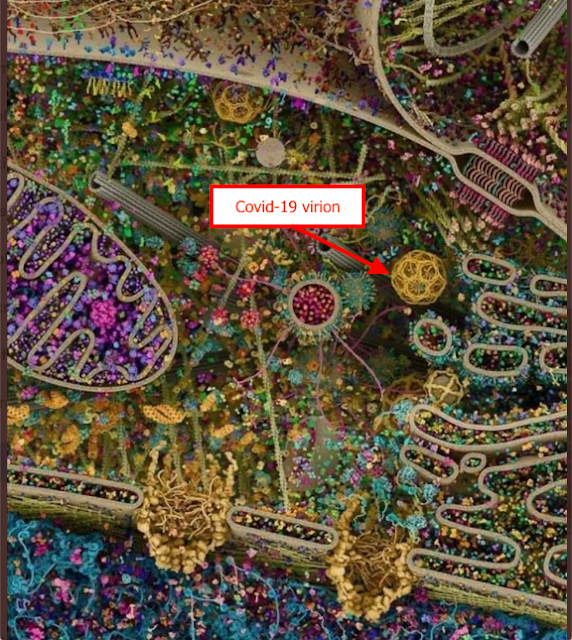 All kidding aside, that's an incredible photograph. Three things jump out at me:

From a reader. While we were freezing in Texas last week, the Saudis weren't having it so easy, either.

Saudi Arabia hit by a rare blizzard as region sees snow fall -- These camels are taking their lumps in Saudi Arabia, which was hit by a blizzard Thursday, according to a report.

Email ThisBlogThis!Share to TwitterShare to FacebookShare to Pinterest
Labels: Never_See_Snow_Again

Comedic timing: If Justin Trudeau had the timing of a professional comic, he would shut down Line 5. 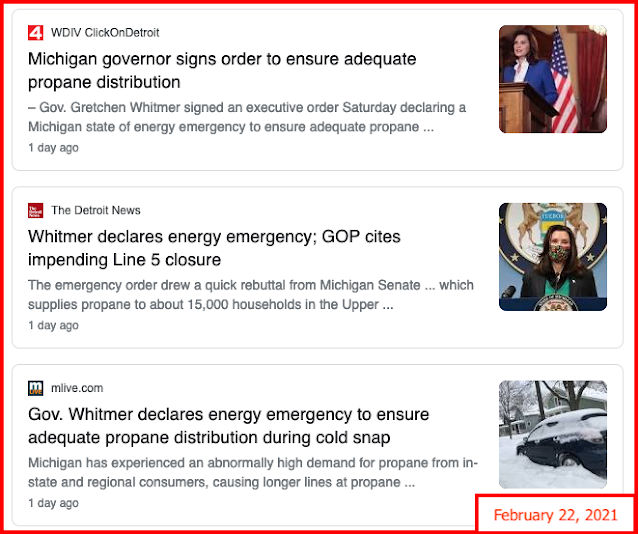 Worst excuses ever: when live mics catch the unfiltered comments of politicians, athletes, and celebrities, resulting in the aforementioned saying that's really who they are not.

Over at Schwa Nation.

It seems like I've posted this before, can't remember.

The Auctioneer Song, Leroy Van Dyke
Posted by Bruce Oksol at 6:13 AM No comments:

Gasoline demand: I forgot to post the graph last week. I'm not going to do it now; it was hardly worth posting then, and it's certainly not worth posting now. The new data will be out in a couple of days. Link here.

Why is every Willie Nelson cover better than the original?

The City of New Orleans
Focus on fracking; weekly edition has been posted. Link here.
It will never snow again: link here.

No wells coming off the confidential list. Tomorrow, two, and then one more on Wednesday, and that will be it for the week. If it gets any slower, I'm going to have to lay-off Sophia as the fact-checker, spell-checker, and gopher. Even the number of active rigs hasn't changed in ages. Fortunately we have Dr Fauci whose narrative changes daily; often more often depending on how many celebrity talk shows he visits.
RBN Energy: February's cold blast sets new recors for the Canadian natural gas market.

The February 2021 polar vortex will be one for the natural gas record books in the U.S. and Canada — and the month isn’t even over yet!

Though no stranger to frigid weather, Canada’s natural gas market has felt the impacts of this month’s extreme cold on both sides of the border. Its own prices, demand, and storage withdrawals have reached multi-year or all-time records as gas buyers have jockeyed for molecules from anywhere they can get them. Gas exports to the U.S. have reached highs not seen for more than a decade, adding emphasis to what has been an emerging turnaround story for Canadian gas into the U.S. market. To top things off, the latest gas market records might be a preview of what is to come in the next few years as Canada’s structural demand for natural gas continues to increase, regardless of how cold it is. Today, we describe all the latest Canadian gas market action and what might be in store for next winter.

Tone deaf? I always thought The Muppets were tone deaf when it came to depicting Swedish chefs, swine, and Ranidae. It turns out I was not the only one. Disney has finally gotten the memo. In response, before airing certain episode of The Muppets, Disney+ will flash a warning to the audience that "some of the scenes are inappropriate but because the company makes so much money on the episodes and it cost them a lot of money to acquire the franchise, the episodes will be shown, anyway."

TCM does the same. If not, TCM would probably have to drop 90% of its programming. It is amazing that, for example, organized crime has been so maligned, particularly by Robert Stack. It goes without saying the French cops were maligned in Casablanca.

For Disney, the depiction of the common green frog and swine was bad enough but apparently what took the cake was the depiction of the Swedish chef, who in fact, was Norwegian. The Swedes have apparently only recently gotten in on the joke. IKEA is rumored to add lutefisk to its menu to offset criticism that its meatballs are getting more credit than they deserve.

New helicopters: Minot AFB will transition from the Huey to the Grey Wolf in 2023. Links:

Neanderthals: died out due to climate change, due to flipping of the "magnetic switch" 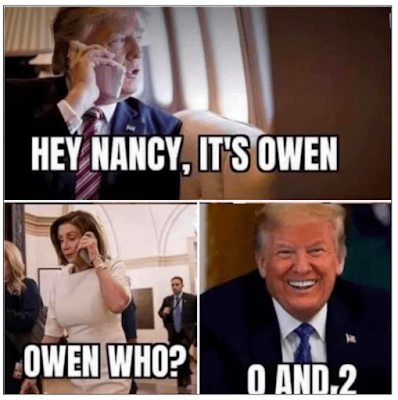 And, of course, the musical interlude, absolutely the best song ever:

If There Life After Love? Cher
Posted by Bruce Oksol at 5:28 AM No comments: