Factoid: Mother Jones reports that the Dakota Access Pipeline is only seven miles shorter than the Keystone XL would have been.

We've lived in Texas for sixteen years, or thereabouts. We moved to San Antonio in 2000, and the very first August we heard about the "Hatch Festival." It took sixteen (?) years but I finally got around to trying them. Wow! [We moved to DFW area about three years ago -- and there's a huge difference between south Texas and north Texas, but I digress.]


1. Roast the Hatch peppers on a grill until the skin is wrinkly and look ready. Not to be burned; to be roasted.
2. Put the Hatch peppers in a closed paper bag for ten or fifteen minutes. (Some YouTube folks say a plastic bag, but I would think that's heresy or something they would do in Turkey.)
3. Remove the skin from the peppers.
4. Slit open the peppers. Fill the peppers with anything you want. I used Texas chili out of the can. My wife stuffed her giant Hatch pepper with a stuffed sole filet from Omaha Steaks and quinoa.
5. Re-heat in microwave (35 seconds for chili-stuffed peppers; longer for the sole filet). 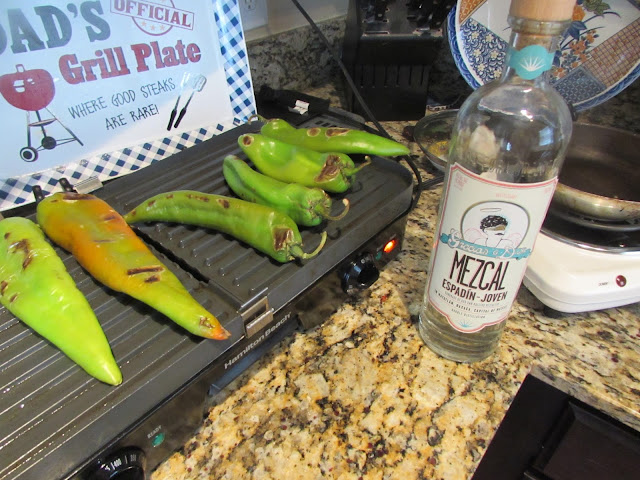 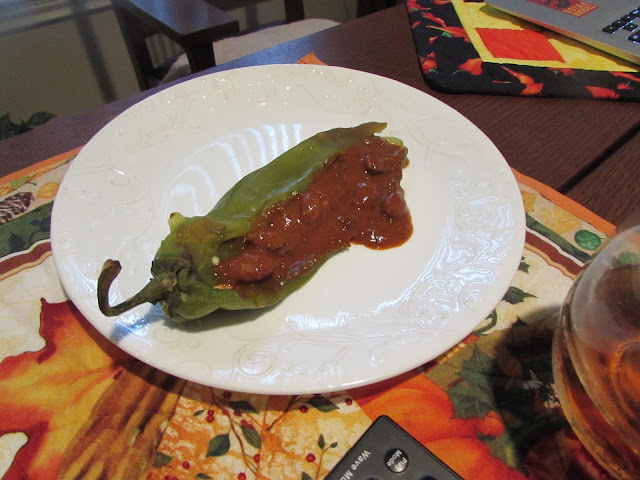 Indoor grills only go up to 450 degrees, and that does not seem hot enough. Broiling would probably be better but I just can't imagine NOT grilling something. So, they were on the grill for a looooooonnng time before putting them into the paper bag for ten minutes.

But they were incredibly delicious.

The mezcal in the photo above was for "show" only. I did not have any mezcal tonight.

The "hot" Hatch peppers were very hot. If you are not used to hot peppers, go with mild peppers. Mild peppers are much bigger anyway.
Posted by Bruce Oksol at 5:19 PM No comments:

Deep Time: coined by John McPhee, writer on geology, to distinguish geological time from the scale of time that governs our everyday lives; the concept was developed by James Hutton, Scottish

Chapter 1: Nothing Beside Remains
Introduction to cladistics

Chapter 4: Darwin and His Precursors
discusses the extinction of the dinosaurs
uses analogy of the Periodic Table to discuss affinities
nature's organization as seen by Linnaeus
discusses the problem of "species"

Chapter 5: The Gang of Four
Donn Rosen, Peter Forey, Colin Patterson, Brian Gardiner: the Gang of Four
1981: 112-page technical monograph
published as an article in the scholarly Bulletin of the American Museum of Natural History
argued that lungfishes were the closest living relatives of the tetrapods
used cladistics
discusses "grades" and "clades" (I had not seen "grades" before and it does not seem the term survived the test of time)

Chapter 6: The Being and Becoming of Birds
when did birds become birds (clades and grades)
flight is so difficult and energetic an exercise that birds gave it up as soon as the opportunity presents itself; the world is full of flightless birds; fossil record contains early records of the abandonment of flight

Chapter 7: Are We Not Men
a cladogram of hominid interrelationships
the cladogram is "nicer" than the usual "evolutionary tree we often see; it's easier to work backwards from the right (the "end") to the left (the "beginning") 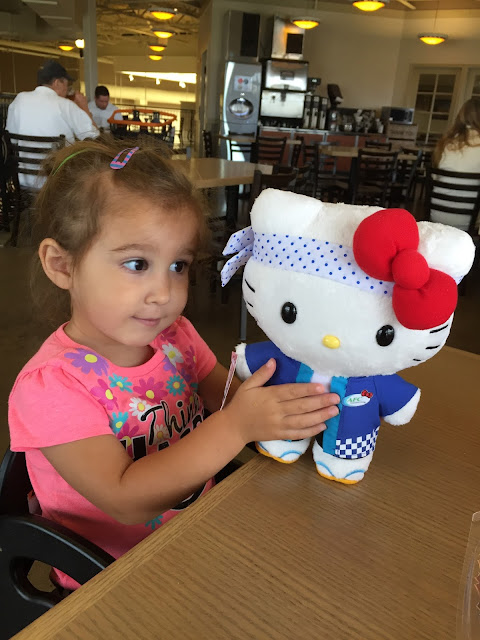 Raisa Energy:
Yesterday, it was noted that Raisa paid $20,000/net acre in the August, 2016, quarterly North Dakota lease auction. Specifically:
Some time ago I estimated that landmen are making decisions based on estimates that there is 20,000 bbls of oil / acre in the better Bakken.  From there, one can do the math. Producing Permian is getting $40,000 / acre. 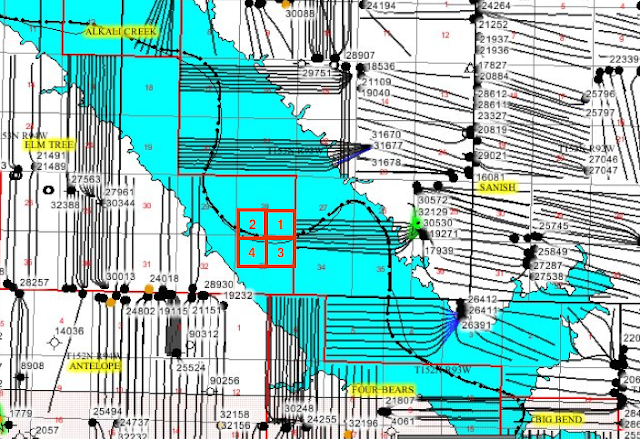 August 16, 2016: EIA -- US crude oil exports are increasing and reaching more destinations. This will most likely be on OPEC's September meeting agenda.


Original Post
This is quite a story. John Kemp started tweeting about it a few days ago. The Marshall Islands has become the 5th "largest" destination for US exported oil.


Best known for diving, lagoons and the island that gave the world the name for the bikini swimsuit, the Marshall Islands is now gaining attention as a top-five destination for U.S. crude exports despite the lack of a refinery to process the oil.

The shipments to the Marshall Islands, a tiny atoll nation in the middle of the Pacific Ocean, are a quirk of U.S. regulations, providing a vivid example of how traders carry out arbitrage opportunities and how fuel is supplied to some of the world's most remote regions.

Since the removal of restrictions on exporting U.S. crude in December 2015, the oil has gone to a rising number of countries, with an average monthly volume of over 500,000 barrels per day (bpd).

Among the top takers of U.S. crude are the Netherlands, Japan and Italy. But, ahead of France, at number five comes the Marshall Islands.

"The Marshall Islands... is the fifth-largest non-Canadian destination for U.S. crude oil exports in 2016, averaging 14,000 barrels per day," the EIA said.

They are an unlikely destination for crude exports, with a population of 50,000, located in the middle of the Pacific to the west of Hawaii and to the east of the Federated States of Micronesia.

The Marshalls are best known for being a major shipping registry, a diving paradise, and for the Bikini Atoll where dozens of U.S. nuclear bombs were tested in the 1940s and the 1950s. French designer Louis Reard used the island's name for his two-piece swimsuit that he released in 1946 to capitalize on the explosive connection.

The EIA says that the U.S. oil is unlikely to remain in the Marshall Islands.

There are no refineries in the Marshall Islands.

I think this is the real reason:


Traders said that the Marshall Islands were also being used to comply with U.S. regulations requiring exporters to specify a destination for their goods, even if in some cases the final destination changes en route due to arbitrage opportunities.

Babe Ruth World Series. Ardean Aafedt Stadium is no stranger to hosting the Babe Ruth World Series. Williston has hosted the tournament three times, each time taking place at the storied ballpark. This World Series is no different, as Ardean Aafedt will once again open its gates for teams from every corner of the country. However, this is a different stadium than it was in 2013. A number of different improvements have been made to the ballpark in the last three years.

Chokecherry Festival. The North Dakota Chokecherry Festival will be held Aug. 12 and 13 at Harmon Park in Williston. The family-friendly event will feature free burgers and pancakes (while supplies last); art, craft and food vendors; a fun run; and live entertainment provided by the Ultimate Air Dogs; singers Lexi Wyman, Tigirlily and Gwen Sebastian; Bear Hollow Wood chainsaw artists. Note: these are the "artists," not the jugglers.

New fire station. The Williston Fire Department is preparing to open Station 2 in about a month. The facility will have eight apparatus bays, a fitness room, training room, large kitchen, bunk rooms and TV room. Construction on the training tower finished earlier this summer. Watch for next week's Williston Wire for more details about the fire department's construction projects in 2016.
Posted by Bruce Oksol at 9:45 AM No comments:

Located in western Louisiana on the Calcasieu Ship Channel just south of Lakes Charles, the Port Cameron project will allow for faster deployment of supply vessels, support and emergency services for exploration and production (E&P) activities in the U.S. Gulf of Mexico.

Port Cameron presents an opportunity for a brand new, modern port to be added to the Gulf Coast. Even with the oil price downturn, oil and gas activity in the Gulf of Mexico is expected to increase going forward.

Meanwhile, over at Zacks:

Enterprise Products Partners has completed the construction of an 82 mile, 12 inch diameter NGL pipeline along with the DBGP plant. The new pipeline links the plant to the partnership’s Chaparral Pipeline. With this, customers will gain access to the partnership’s fractionation and storage complex in Mont Belvieu, TX.

Reeves County? Far west Texas, almost in New Mexico/Mexico. County seat: Pecos. And, oh, by the way, no one really knows the etymology of "pecos."

Late day. Down 34 points. NYSE:
Mid-day. Down 60 points. NYSE:
Opening. Even though the market pulled back slightly on the open, there are some interesting tidbids. NYSE:

Saudi Arabia No Longer Has Cash For Big Projects; Iran Does; Update On The Glut At Cushing -- RBN Energy -- August 12, 2016

North Texas under heat alert. Real temperature 103 to 105 today; feel like temperature in direct sunlight this afternoon could be 115. I plan to be riding my bike about that time. Maybe I'll wear a cap today. Carry some water.

Retail sales flat in July: flat vs 0.4% increase expected. Wall Street trifecta yesterday: Dow, S & P 500, and NASDAQ all hit new record highs on same day (first time that has happened since 1999). Americans have only three places to put their money month-over-month: retail sales; the stock market; ObamaCare. My hunch is that the Wal-Mart crowd -- retail sales were flat in July --is throwing their money into the stock market. A bubble, Trump calls it. Retail sales are flat and ObamaCare is unraveling (it was never "raveled" to begin with), so that leaves the bubble we call the "market."

Anyone paying attention knows that Saudi Arabia is facing a huge cash crunch.

The fact that Saudi canceled a huge solar energy project some months ago spoke volumes. Saudi no longer has the cash for big projects. From Bloomberg: Saudi Arabia "delays" $109 billion solar plant by 8 years. These projects are critical for desalination plants; desalination plants are not "nice-to-have" budget items for Saudi Arabia. They are in the "must fund" column.

It now appears that there is a very good chance Prince Salman's IPO will be a bust if he doesn't turn things around (see below -- the "$2 trillion mistake").

Meanwhile, Saudi's #1 adversary, Iran hardly seemed to miss a beat even under severe sanctions. Now that sanctions have been lifted, Iran is moving forward with huge projects and has gotten back to "full" crude oil production.

Ali Salehi, Iran’s top nuclear official, announced on Thursday that Iran has invested $10 billion into the construction of two new nuclear plants after receiving orders from Rouhani, according to reports in Iran’s state-controlled media.

Saudi Arabia can't even "handle" Yemen. That war rages on and Saudi is losing so many tanks in that war, that it did not go unnoticed when they ordered more US tanks to replace what they've lost.

This has to absolutely scare the Hades out of Prince Salman. And unlike Saudi Arabia, Iran has a steady source of income: kidnapping and ransoms, which guarantee as much as a half a billion dollars for four Americans as long as President Obama calls the shots for the DOJ.

In the Mideast, this is the story to watch: the rise of Iran, and Saudi Arabia is watching it very closely, but may not be able to do much about it. We know whom Hillary supports.

Later: it is not going to get any better for Saudi Arabia. Almost everyone agrees Saudi Arabia could become a net importer of oil by 2030. On the other hand, global tight oil production will double by 2040, and most tight oil will come from the United States.  Russia, Canada, and Argentina will each produce a significant amount but nowhere near what the US will produce.
Posted by Bruce Oksol at 8:28 AM No comments: