Hedging: it should be noted that how oil companies hedge their contracts, the sudden drop in oil prices could benefit some oil companies, at least on paper, for the immediate short term. However, overall, I don't think anyone bullish on oil would be happy with price of oil right now.

Can you spot the "Sixth Extinction"? Link here.
The Original Post

Now that I'm reading John Hands' Cosmo Sapiens again, c. 2015, it is fun to go back and read The Sixth Extinction by Elizabeth Kolbert. Actually I've never read the entire book but I've seen the title often and have often paged through it while standing in Barnes and Noble. I couldn't imagine spending that much time reading one book with such a title but a "reader's digest" version would be welcome. It turns out there is, over at The New Yorker, May 18, 2009. Archived.

Kolbert's essay addresses early on the "fallacy" of her own title, the sixth extinction. In fact, there have been at least twenty global extinctions, but five were particularly huge, and so, for marketing, no doubt, this book was titled the "Sixth Extinction."

Depending upon how this all turns out, there is a question whether this "sixth extinction" will even be ranked among the top twenty, much less the top ten. And I guess it's agreed that it won't make the top five. I guess is if we don't kill off all the cockroaches, we won't see another global extinction make the top five. But I digress.

Reading the "reader's digest" version at The New Yorker suggests my initial hunches were correct. The sixth extinction had mostly to do with amphibians and buried deep in the article:


But, as the number of examples [of disappearing amphibians] increased, the evidence only seemed to grow more confounding. Though amphibians in some remote and—relatively speaking—pristine spots seemed to be collapsing, those in other, more obviously disturbed habitats seemed to be doing fine. Meanwhile, in many parts of the world there weren’t good data on amphibian populations to begin with, so it was hard to determine what represented terminal descent and what might be just a temporary dip.

I've never gotten too excited about the link between man and the potential extinction of amphibians. After all, as Kolbert herself noted:


The fifth [extinction] occurred at the end of the Cretaceous period, sixty-five million years ago. The end-Cretaceous event exterminated not just the dinosaurs but seventy-five per cent of all species on earth.

To the best of my knowledge, neither men in general nor one man in particular, Trump, had anything to do with the fifth extinction. And yet it occurred. Of the dinosaurs, only the birds survived.

On another note: for me, amphibians have always been a transitional clade, one of two clades that solved the problem of preventing eggs from drying out for those adventurous animals that tried to move from the sea to the land. Amphibians never really pulled it off; they return to the "sea" to lay their egg; the amniotes succeeded where amphibians failed.

I'm always been more surprised by the fact that amphibians have survived this long, much less surprised that they might go extinct in the next several million years. With or without the help of man.

Along that same line, I always thought "reptiles" were a grab-bag of animals assigned to a clade (or better said, a grade) that really didn't fit anywhere else. The term "Reptilia" is falling out of favor to "Sauropsida" (wiki) and it appears Reptilia/Sauropsida are defined more by what they are not, than what they are. Despite their small number, it appears "Reptilia/Sauropsida" are gaining more "stature" among biologists, at least based on the amount of new information printed since I last studied them in high school.

From the internet/wiki: there are about 7,500 species of extant reptiles. There are approximately 8,000 species of amphibians, of which 90% are frogs.


Estimates of the number of living eukaryotic species range from five million to 30 million, of which around two million have been described.
Only about 4,500 prokaryotic species (bacteria and archaea) have been described, but estimates of their total number in the top  one kilometer of the Earth's crust alone range from 10^8 to 10^17 (a hundred million to a hundred thousand trillion).

And as long as I've gone this far, insects?

Time for some music:


The Age of Aquarius, The Fifth Dimension
I've often wondered what the equivalent of the anaerobic St Greta of Thunberg would have "said" during the great oxidation event, also called the "oxygen holocaust," 2.4 billion years ago which not only caused almost all life on earth to go extinct but it happened relatively quickly, in the big scheme of things.

And Prince Charles is worried about a few inches in the rise of the Earth's oceans.
Posted by Bruce Oksol at 2:26 PM No comments:

Re-writing "blackface"? Maybe it's just me but the 30-minute TCM short on "blackface" that aired last night (January 26, 2020) seems to be re-writing history, now that more and more politicians have been exposed. One narrator suggested "blackface" was America's first original art form. [I can't make that up.] The segment seemed to note that it was okay as long as it was folks like Bing Crosby ("Holiday Inn") and Fred Astaire ("Bojangles") doing blackface. No mention was made in the TCM segment of recent Virginia leadership in blackface which they have admitted is accurate. I saw the segment for the first time last night and generally I don't miss much on TCM suggesting this is new. The timing of the segment is interesting.

Wavelets: from The WSJ -- mathematics pioneer Ingrid Caubechies has more barriers to break. Best known for her work on "wavelets," she wants to reduce the obstacles to women entering the sciences. Paywall.


Ingrid Daubechies is a woman of formidable firsts: the first tenured female professor of mathematics at Princeton University (1994), the first woman to receive the National Academy of Sciences Award in Mathematics (2000) and the first woman elected president of the International Mathematical Union (2011).

Dr. Daubechies, 65, was born in Houthalen, Belgium. Her mother was a homemaker, her father a mining engineer in the local coal mines.

She earned her Ph.D. in theoretical physics at the Free University of Brussels and continued to conduct research there until 1987, when she joined Bell Laboratories in New Jersey. That year, she also married Robert Calderbank, an American mathematician, with whom she has two children.

Dr. Daubechies is best known for her work on mathematical structures called wavelets; her discoveries have been so influential, in fact, that these are referred to in the field as Daubechies wavelets. She describes them as “mathematical building blocks” that can be used to extract the essential elements of images or signals without losing their quality—in effect, a new universal language for scientists and researchers.

Blogging? I may or may not do much blogging on non-Bakken news this week -- until some of the craziness dissipates. I may not even report Apple's earnings tomorrow afternoon.

John Hands' Cosmo Sapiens:  Human Evolution from the Origin of the Universe, c. 2015, should be read by every high school junior/senior who plans to major in biology, chemistry, or physics. He covers a lot of ground.

As hard as he tries, he simply cannot avoid metaphysics and Intelligent Design, and/or intelligent design (the upper-case letters are very, very important).

Concepts that the author notes (some of which the author brings up several times):
Eyesore? Firefly.com.  Parked outside social-media chat room near DFW. 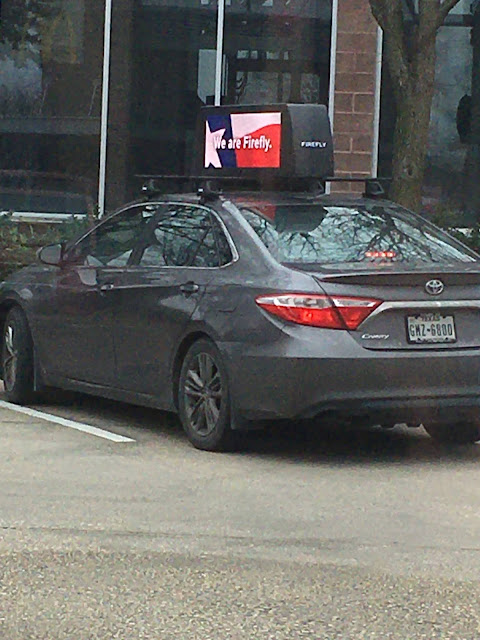 On the corner near our little hovel are two gas stations, across the street from each other, a Murphy service station and a Shell service station, neither with an EV charging unit.

For the longest time, the Murphy station location was occupied by an ExxonMobil station. Both the XOM station and the Shell station had some of the highest prices for gasoline in the immediate area, often 20 to 30 cents / gallon more expensive for least expensive grade.

Murphy came in, replaced XOM. Murphy is a low-cost, discount outlet. Besides being a most modern, state-of-the art facility, the Murphy station on our corner now has the least expensive gasoline in the area. When it went into service, the price for regular gasoline was twenty cents/gallon less expensive than Shell across the street.

Shell hung in there for several months without bringing down the price of their gasoline but it appears over the weekend, Shell finally threw in the towel. This morning I noted that Murphy was selling their regular gasoline for $1.979/gallon. To my surprise, across the street, BP was selling its regular gasoline for $1.989 -- one penny/gallon higher. Without Murphy across the street, my hunch is that the price of gasoline in our area would have remained twenty cents higher, closer to $2.20, than $1.90. Meanwhile, on another note, google doofus-in-chief milliondollarway. 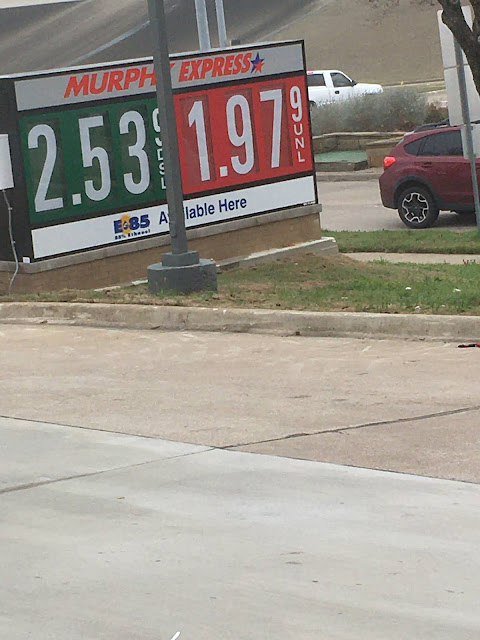 RBN Blog On Bakken Natural Gas; Up To Six Wells Might Be Reported Today -- January 27, 2020

Climate lawsuits against Big Oil? Poor track record. Bloomberg. Labeled a "news" article but reads like an op-ed suggesting this won't go on forever. At some point Big Oil will pay according to Erik Larson.


The rapid increase of natural gas processing capacity in the Bakken in recent months has helped to ease producers’ growing pains, clearing the way for more crude oil and associated gas to be produced there and more Bakken gas to flow into the Midwest. That good news is countered, however, by bad news for Western Canadian gas producers, whose long-standing pipeline takeaway constraints only worsen as more Bakken gas flows into the Northern Border pipeline that cuts through North Dakota on its way to Chicago and other downstream markets.

Today, we continue our series on the fight between Bakken and Western Canadian producers for space on Northern Border with a look at incremental flows into that key pipe.