A reader shows us again how incredible the natural gas "fill rate" has been so far this year. See this post for background.

How fast is the natural gas fill rate this year? Really fast.

For the week ending March 22, 2019 -- just a few weeks ago, US natural gas inventories were 20% below inventories one year earlier.

By June 7, 2019, most recent data available, US natural gas inventories are now 10% above those of last year.

There's a reason President Trump is unhappy with Europe linking with Russia for natural gas (Nord Stream 2). The US needs markets for all the natural gas it is producing.
Posted by Bruce Oksol at 10:40 PM No comments:

DUCs: I'm sure this has been followed on twitter, like forever, but this is the first time I've seen it:

For me, getting DUC data means a whole lot more than weekly rig counts.


The growth of onshore wind energy is collapsing in Germany, jeopardising both German and EU renewables targets. Germany installed just 134 MW of new onshore wind farms in the first quarter of 2019 – the country’s worst first quarter for onshore installations since 2000.

Germany is likely to install a total of just 1-2 GW of onshore wind this year. This is significantly down on the past five years when Germany installed an average of 4.3 GW per year. This is well below what Germany needs to meet its own 65% renewable electricity target by 2030 and to deliver its share of the EU’s 32% renewable energy target. Offshore wind will not fill the gap: Germany is due to build just 730 MW per year up to 2030.

This is in contrast with Spain, for example, which will build around 4 GW of new wind energy in 2019. Some of the slowdown in Germany is the result of failed auction systems in 2017, when a lot of community projects won without a permit. Many of these projects are still to be built due to more generous realisation timelines.

But permitting for new wind farms remains the underlying problem. The process used to take just 10 months but is now taking over two years. Public authorities are not applying deadlines and many wind farm projects are getting stuck in legal disputes. Plus there is a lack of staff to process the applications, especially at Bundesland level. Just 400 MW of new wind farm permits were awarded in Q1 2019, well below historical levels. All this has meant the last three onshore wind auction rounds were undersubscribed leading to rising prices.

WindEurope CEO Giles Dickson said: “Onshore wind energy in Germany is in deep trouble. The development of new wind farms has almost ground to a halt. The main problem is permitting – it’s got much slower, more complex and there aren’t enough civil servants to process the applications. It seriously undermines Germany’s ability to meet its 2030 renewables target and contribute to the EU target. And it’s affecting Germany’s wind turbine industrial base. Half of Europe’s 300,000 wind energy jobs are in Germany. But 10,000 have gone in Germany in the last five years. And this could get worse: there hasn’t been a single turbine order recorded in Germany in Q1 this year.

The reader who sent me the link, and who follows this a lot more closely than I do, suggests that the wind issue is much more serious in Germany that this article implies/suggests. That would make sense. The article is a press release from an advocacy, lobbying group. On the one hand, they want a bit of hyperbole to advocate their position, but if they tell us how bad it really is, they run the risk of getting even less support.

We're starting to see the same thing in North Dakota. The ND PUC recently denied a permit for a wind farm in Burke County.
Posted by Bruce Oksol at 1:21 PM No comments:

Texas produces oil and natural gas, but right now, in Texas, crude oil is the story. In fact, in the Permian and the Eagle Ford, operators probably wish that natural gas would just go away. Certainly in the Bakken operators would like to see 95% crude oil and 5% natural gas from their wells.

So, with that in mind, of the ... OMG ... decline of six rigs week-over-week how many of those rigs were in plays drilling for oil? Drum roll .... one rig.

The headline: Texas led all states in rig declines. So was Texas the only state to drop one oil rig, or did Texas drop only natural gas rigs? Either way, for Texas it's a non-story and actually for the rest of us, it's a non-story regardless.

The data is important, but it hardly deserves a stand-along tweet as well as a headline story. Making it part of a bigger report, like the weekly petroleum report or the weekly drilling report makes sense, but as a stand-alone story .... really?

But it provided a stand-alone post for the blog. 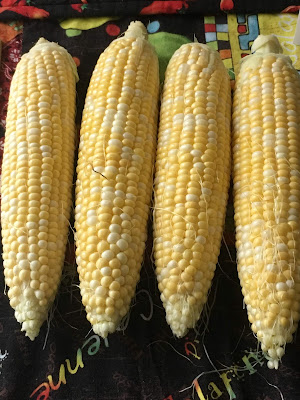 Fifty cents for four ears. I don't know how American farmers do it.

On Friday, "they" had just dropped off two huge crates of corn at the Tom Thumb grocery store next to our apartment complex. I went to the store yesterday to get a couple of ears; completely sold out.

Today, a smaller shipment and by tomorrow morning it, too, will be gone.
Posted by Bruce Oksol at 11:28 AM No comments:

Disclaimer: these notes are to help me understand the Bakken. In a long note like this there will be typographical and factual errors. Much is left out. If this is important to you, go to the source.

Among many amazing details, note the drilling time when things go well -- vertical, three days; the curve, less than half a day; a long horizontal in three days. The operators in the Bakken are truly in their "manufacturing" stage. But with each well, they learn more about the geology. And the geology in the Bear Creek seems to have a different wrinkle -- and that might be an apt metaphor.

The wells:
From the file report:
Production:

The next well:
From the file report:
Production:


The third well:
From the file report:
Production:

I was wondering when we would see this story -- it took less than a week for insurers to respond. From Bloomberg, oil tanker insurance premiums set to surge.

Also from Bloomberg, President Trump is trying to make it more expensive for Gazprom to go ahead with that European Nord Streak pipeline link. Good, bad, or indifferent, past presidents have simply ignored these things.
Posted by Bruce Oksol at 7:24 AM No comments:


A few months back, we discussed the quandary that crude oil shippers face when deciding whether to commit to proposed new pipeline capacity out of the Bakken and the Niobrara, and from the Cushing, OK, hub to the Gulf Coast.

The dilemma boils down to this: more capacity is needed, based on current constraints or projected growth (or both), but there’s some reluctance among shippers to make long-term commitments. Their worries are that production gains might slow and too much takeaway capacity might be built, resulting in bidding wars for barrels at the lease to fill shipper commitments. Well, in recent weeks there’s been a bit of a break in the project logjam; among other things, P66 and its partners have decided to proceed with the construction of both the Liberty Pipeline, from the Bakken and Niobrara to Cushing, and the Red Oak Pipeline, from Cushing to Houston and Corpus Christi via Wichita Falls, TX.

And that’s not all. Today, we provide an update on efforts to develop new pipeline capacity from North Dakota and the Rockies to Oklahoma and beyond.