"Take It Or Leave It, Enbridge" -- Back In PUC's Court -- April 23, 2018: Administrative Judge Threads The Needle -- Rules For The Pipeline; Rules Against Enbridge 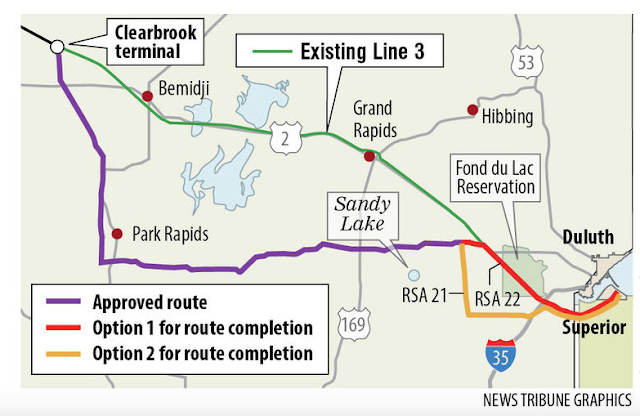 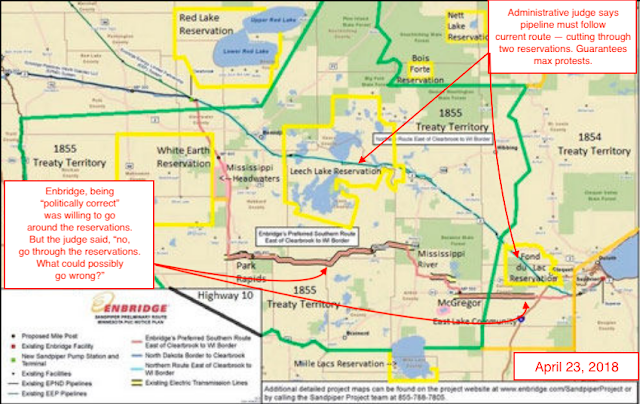 Buzz on the street: Enbridge knew exactly what it was doing when it offered a "preferred but different route." Scott Adams would have a lot of fun with this one.

Disclaimer: this is not an investment site. See disclaimer. 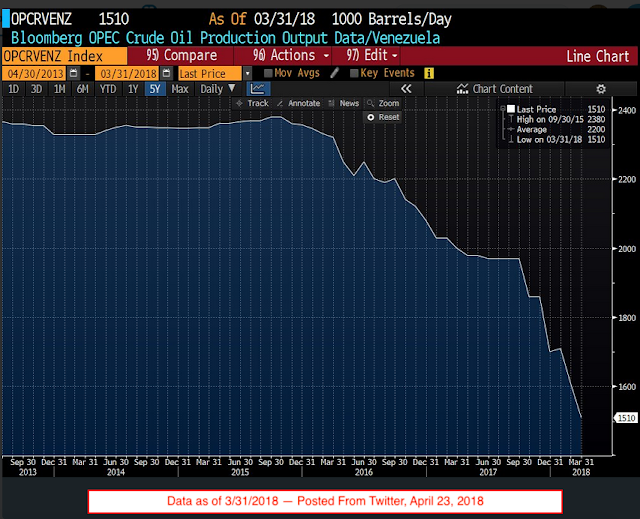 The graphic at this post appears to show the existing route and Enbridge's preferred route.


Later, 5:07 p.m. Minnesota time: the ruling has still not been released as far as I can tell (google: today's news on enbridge line 3).

Later, 3:39 p.m. Minnesota time: the ruling has still not been released as far as I can tell (google: today's news on enbridge line 3).

With the future of the Trans Mountain pipeline expansion project still in limbo, another major pipeline project is awaiting a do-or-die decision by regulators in Minnesota, with a key report on the future of Enbridge's Line 3 expected today.

The federal cabinet gave the green light to both Trans Mountain and Line 3 — the largest project in the history of Enbridge — on the same day in November 2016. And while work on Line 3 has already started on the Canadian side of the border, the regulatory agency tasked with approving construction through Minnesota has so far held off granting necessary permissions amid intense local opposition.

If Enbridge fails to secure a state permit and route approval, Line 3 could join the list of other major natural resources projects approved by Prime Minister Justin Trudeau that have failed to launch.

Enbridge hopes to replace the entire span of the aging pipeline, which carries oil from a terminal near Hardisty, Alberta, through northern Minnesota to Superior, WI, where it travels on to U.S. refineries for upgrading. 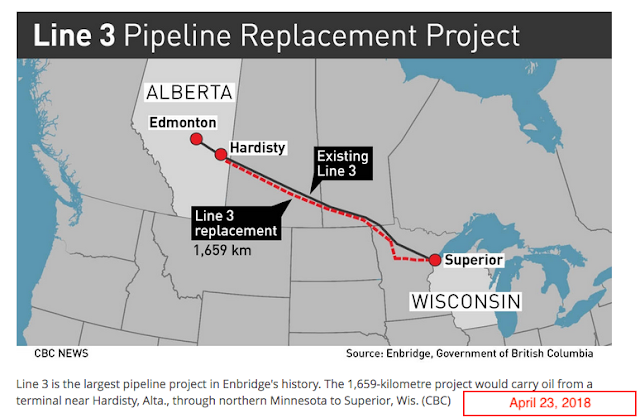 My hunch: the court will find that more "information" is needed from one party or the other, or that some agency failed to consider all aspects. I'm sure there is at least one indigenous group in Florida that was not consulted.

With so much "intense opposition," there's no way any judge could approve this request. Especially since it does not benefit Minnesota, as far as I can tell.
Posted by Bruce Oksol at 12:57 PM No comments:

Email ThisBlogThis!Share to TwitterShare to FacebookShare to Pinterest
Labels: Pipeline_Canadian

I don't really see this as "Trump's revenge." This started well before Trump -- the US shale revolution. Trump simply inherited the deluge -- and actually the deluge began under Obama's watch. If folks go back to Bush II, one will find that Bush II was concerned with shortage of crude oil, and like most modern US presidents was begging Saudi Arabia to "go easy" on the US with regard to oil.

Obama had simply given up,

By the way, he was wrong on Trump, too. Both he and Hillary were working to elevate Trump among the fourteen original Republican candidates, figuring Trump would be the easiest to beat -- Hillary was most afraid of the "Bush" name -- but I digress.

Bush II, like most modern US presidents, had implored the Saudis to "go easy" on the US with regard to oil; Obama had simply given up even as Aubrey McClendon and Harold Hamm were drilling. Obama completely missed the revolution -- he certainly was not the sharpest knife in the drawer -- and Trump now presides over another problem -- but I don't see it as "revenge."

The article is a very, very good article for newbies, running through the various grades and sources of oil. 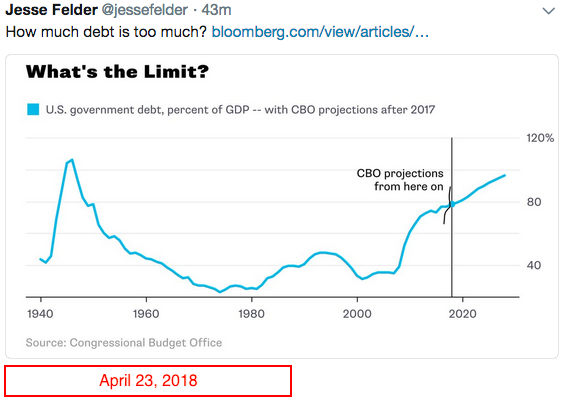 BHGE: 9 cents vs 7 cents forecast; due to one-time tax benefit and an increase in oil prices. Net income (not excluding anything) was $70 million (17 cents/share) vs $31 million (7 cents/share) the prior quarter. FWIW, BHGE closed up about a percent last Friday; now slightly in early morning trading today.

Disclaimer: this is not a investment site. See disclaimer.

While refreshing my memory regarding the conquistadors and southwest America I learned a bit about whilte acorns (alba - querque) and the Iberian pigs that eat them. Fascinating story. A google search results in a gazillion hits. I was looking for the source that suggested that the quality of the ham increases based on the percentage of white acorns the wild pigs eat to the rest of their diet, and as the quality of the ham increases, so does the price. Of course.

On a side note, as I've aged, I've grown accustomed to eating less -- much less -- but enjoying better food. Right now, my favorite noon lunch: Cheesecake Factory: passion fruit mojito and grilled artichoke. And that's it. That's all I need.

Speaking of the Cheesecake Factory. Until last week I don't recall ever visiting a Cheesecake Factory. If I did, it was more than thirty or forty years ago when I was going to school in southern California -- did Cheesecake Factory even exist then? -- if not, I had never been in one ... until last week. Our daughter / son-in-law often go. The Cheesecake Factory in Southlake, TX, is huge. I could not believe that there would ever be a line --- I asked our waiter if the restaurant ever got busy. He said every weekend -- lines at the door; people waiting upwards of an hour (maybe more) to get in. Amazing. It's not like there aren't a gazillion restaurants in north Texas, and scores in that small neighborhood.

I'm still in my "China phase." I know nothing about the "opium wars." Time to learn. A quick look suggests that it's timely time to begin considering Trump's tariffs; the legalization of marijuana and a more "open" attitude regarding drugs in general (in the US); North Korean negotiations; etc.

This book seems to be not particularly "literary" -- just reading a  few pages suggests it's going to be dry and not particularly interesting, but it's all this library has on the subject -- at least that I found quickly:

The Opium Wars: The Addiction of One Empire and the Corruption of Another, W. Travis Hanes III, Ph. D. and Frank Sanello, c. 2002.

My hunch: Travis Hanes III, Ph.D. might be brilliant, but he may not be a good author. And, so Frank Sanello was called in to assist. Just my hunch.

Climactic act of the second war: the destruction of the Summer Palace -- what little I know about the Summer Palace suggests this might be equivalent to destroying the White House, the Capitol building, and the Smithsonian all in one fell swoop.

This is how the book begins:


Imagine this scenario: the Medellin cocaine cartel of Colombia mounts a successful military offensive against the US, then forces the US to legalize cocaine and allow the cartel to import the drug into five major American cities, unsupervised and untaxed by the US.

The American government also agrees to let the drug lords govern all Colombian citizens who operate in these cities, plus the US has to pay war reparations of $100 billion -- the Colombians' cost of waging the war to import cocaine into America.

That scenario if of course preposterous and beyond the feverish imagination of the most out-there writers of science fiction. However, a similar situation occurred not once, but twice in Chine during the 19th century.

In both cases, however, instead of thuggish Colombian drug dealers, it was the most technologically advanced nation on Earth, Great Britian, that forced similar conditions on China.

And so I begin. To be continued elsewhere.
Posted by Bruce Oksol at 7:49 AM No comments: