March 23, 2018: note the halo effect of a McCoy well in this general area where Oasis has permits for two Nordeng / Mildrend Nelson multi-well pads. The well:
Neither FracFocus nor the sundry forms suggest this well was re-fracked in 2014, but the data certainly suggests it was:

From a site that is blocked by the "blogger.app":

But it now has another distinction that’s making liberals in the Green Mountain State cringe: it is now the only state in the country that never has sent a woman to Congress.

Up in Vermont, the state’s first female governor, Madeleine Kunin, called it “a little embarrassing to be beaten out by Mississippi.” 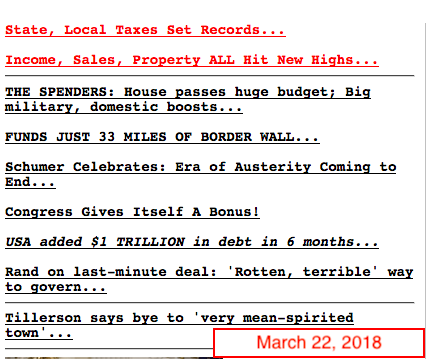 Posted by Bruce Oksol at 4:18 PM No comments:

This is too good not to re-post, from this post just a couple of days ago:


For many air travelers, getting to and from the airport has long been part of the whole miserable experience. Do they drive and park in some distant lot? Take mass transit or a taxi? Deal with a rental car?

Ride-hailing services like Uber and Lyft are quickly changing those calculations. That has meant a bit less angst for travelers.

But that’s not the case for airports. Travelers’ changing habits, in fact, have begun to shake the airports’ financial underpinnings.

Fewer people are parking cars at airports, using taxis or renting cars, according to a recent report from the National Academies Press.

Those trend lines are hurting airports, which depend on fees from parking lots, rental car companies and taxis as their biggest source of revenue other than the fees paid by the airlines. The money they currently collect from ride-hailing services do not compensate for the lower revenues from the other sources.

March 22, 2018: they must be reading Carpe Diem or the blog over at The Washington Post --

Transit ridership fell in 31 of 35 major metropolitan areas in the U.S. last year, including each of the seven cities that serve the majority of riders, with losses largely stemming from buses, but punctuated by reliability issues on systems like Metro, according to an annual overview of public transit usage.

The analysis by the New York-based TransitCenter advocacy group, using data from the U.S. Department of Transportation’s National Transit Database, raises alarm about the state of “legacy” public transit systems in the Northeast and Midwest and rising vehicle ownership and car-based commuting in cities nationwide.

Researchers concluded that factors such as lower fuel costs, increased teleworking, higher car ownership and the rise of alternatives such as Uber and Lyft are pulling people off trains and buses at record levels.

Mark Perry doesn't miss much when it comes to statistics and charts, but it looks like a reader spotted something he missed.

Go to the link at the top of the page for the rest of the post.
Posted by Bruce Oksol at 4:10 PM No comments:

From The Wall Street Journal today: How Two Wells in Wyoming Explain the Natural-Gas Glut. Demand is growing, but so are the troves of gas being unearthed by prospectors. With 154 comments.

I don't think this article adds much to the discussion but it's interesting nonetheless.


Fuel prices are depressed. A pair of wells in southwest Wyoming helps explain why.
This winter, Ultra Petroleum Corp., just months after emerging from bankruptcy, completed two huge wells in the state, drilling down more than two miles and then sideways for another two. Each have produced enough gas to fuel every household in Wyoming.

Ultra’s wells—whose initial flows have been among the largest ever in the U.S.—show how prospectors continue to unearth huge troves of gas.

That output is offsetting increases in the fuel’s use and keeping a lid on prices.

Repeat: each well has already produced enough gas to fuel every household in Wyoming.

The other nice thing about the article -- because of the blog I was able to a) understand it; and, b) put it in perspective.

"Two miles down and then sideways for another two miles": identical to what's going on in the Bakken.

A horizontal well in 2016 was a flop. But this time, Ultra drilled a gusher, which maxed out at the equivalent of 51 million cubic feet a day. A third well was far less prolific.

For the fourth well, begun in January, the company went back to the more successful well design, which involved pumping 281,000 barrels of water and 12.4 million pounds of sand beneath the surface. This attempt was even better than the preceding one, producing as much as the equivalent of 54.5 million cubic feet a day. It cost about $9 million.

Water, sand, percentage: about the same we are seeing in the big fracks in the Bakken. Ultra may have gotten the "ink" today, but operators in the Bakken have been doing this for the past ten (10) years. And for less money in many cases.
Posted by Bruce Oksol at 1:21 PM No comments:

One of the reasons I went into such depth on two Slawson wells was to eventually get to Part III: observations and comments regarding the myths of shale. So, what a treat to see Richard Zeits continue his series on the myths of shale oil.

Today, over at SeekingAlpha, the shale oil myth, "it is too light and no good." [The blog has talked about his often.] 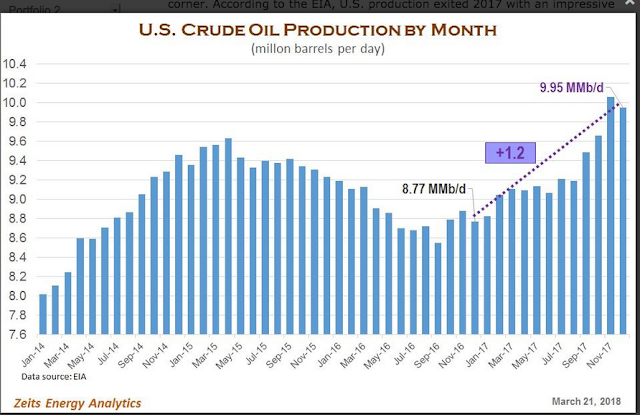 
Is the shortage of heavier crude grades acute? We would argue, not more so than the shortage of all other grades. While global demand for distillates has been on the rise, demand growth for lighter products - gasoline and naphtha - has also been quite strong. Light crudes have been sold out just as much as heavier crudes.

The global refining industry has proven very capable of using all available crude grades to meet demand for products and we do not see this changing anytime soon.

Amazingly, and coincidentally, Zeits has a great graph on the very day that John Kemp noted over on twitter that the delta between WTI and Brent was narrowing, almost nil.

On a per degree of gravity basis, the narrowing is ~$1/barrel per 10 degrees API for the Middle East and West Africa baskets. For the Gulf of Mexico example, the narrowing was more pronounced, roughly twice as great.

In percentage terms, the differentials narrowed by ~20% for the Middle East basket and ~30% for the Gulf of Mexico basket.

This is the measure of Mr. Market's reaction to what one might think of as a "perfect storm" for the global light/heavy supply mix. In other words, the impact of the lighter global supply slate on prices has been minimal.

In our interpretation, this market data disprove the claim that the global supply mix is significantly out of balance and the world is facing acute shortages of heavier crudes.

If there is a shortcoming in his essay today (and far be it for me to come up with anything negative with regard to Zeits, a "shale demi-god") it would have to be that he did not mention the reason behind and the importance of the Keystone XL. Although not treasonous to have stopped it, but ... I consider "killing" the Keystone XL right up there with the Continental Congress refusing to fund George Washington's troops so they afford parkas and water-proof boots.
Posted by Bruce Oksol at 12:51 PM No comments:

Memo To The Kennedy Clan: Head To NYC Central Park; Take The Grandchildren And Their Sleds; It's Spring; We Haven't Seen This In 130 Years -- March 22, 2018

This was never forecast two months ago, nor was it forecast 20 years ago, but we know to the hundredth decimal point the global temperature in 2118 (57.82 degrees Fahrenheit).

On another note, TSLA crashes through the $310 floor. Late last week the CNBC "Fast Money" folks heartily recommended TSLA. Whatever.

From Convergence: The Idea At The Heart of Science, Peter Watson, c. 2016

I think this is my third entry regarding this book. One can do a search for the other entries.

This note will be from Chapter 3: Beneath the Pattern of the Elements

Arianna (the oldest granddaughter) and I have spent a lot of time together on the periodic table. She knows it as well as anyone her age.

A raft of priority disputes: who first noticed the periodicity of the natural elements; the intervals appeared to recur at multiples of eight of hydrogen.

Then on to Chapter 4: the unification of space and time, and of mass and energy.

But the chapter that will probably interest me the most, Chapter 12: "A Biography of Earth: The Unified Chronology of Geology, Botany, Linguistics, and Archaeology."
Posted by Bruce Oksol at 11:01 AM No comments:

This is Part I.


Disclaimer: in a long note like this, there will be typographical and factual errors. Facts, comments, and opinions are interspersed and hard to separate or discern. There are a lot of digressions. There is no hidden agenda and no "fake news" -- at least no attempt to post "fake news." I appreciate any fact checking. If this is important to you, go to the source.

For newbies: This is an interesting area to walk through -- sections 27/34-151-92, Van Hook / Big Bend (the NDIC map clearly shows this section in Big Bend oil field, but the scout tickets identify this drilling unit in Van Hook oil field).

This is a Slawson drilling unit; these are Slawson wells. Slawson always seems to have something a little bit different than the other operators.

The well that ran north (#19207) was a middle Bakken well; the well that ran south (#19208) was a Three Forks, upper bench, well; Slawson specifically said that this well, #19208, was a "continuation" of their program to develop the Three Forks.

On the graphic, you will notice two laterals for #19208. Generally, when one sees that in the Bakken, it is because there was a problem with the first lateral, and the operator went back in and drilled a parallel lateral to get "around" the problem. Initially I thought this was the case for #19208.

But it turns out that Slawson went back in, in 2014, re-entered the vertical, and launched another horizontal, this time in the middle Bakken.  (Interestingly, they re-entered, re-fracked #19208 just two months before they drilled / fracked three new long laterals running from the north to the south alongside these two older short laterals.)

Before we go too far in this story, let's look at the frack reports.
So, we will stop there, catch our breath. Give folks a chance to look at the graphic and imagine the drilling unit as of 2014: two wells, one going north with one lateral (middle Bakken); one going south with two laterals (a Three Forks, and then a middle Bakken); both short laterals. (Not mentioned yet, in fact, by the end of 2014, there were six more wells in this drilling unit -- but we will get to them later.)

Both were typical Bakken wells at the time; nothing great but they were what they were.

Frack data for the initial frack for these two wells:
Note: these two reports -- except for the URL numbers appear to be identical, suggesting that the reports were accidentally duplicated (my original thought) but now it appears they used the very same "mix" to frack the MB and re-frack the TF. I could be very wrong on this.

Production profiles at time of original completion, 2011, are very similar for both wells:

This is where we stand at the end of 2014 in this drilling unit: history of two short laterals drilled in 2011. 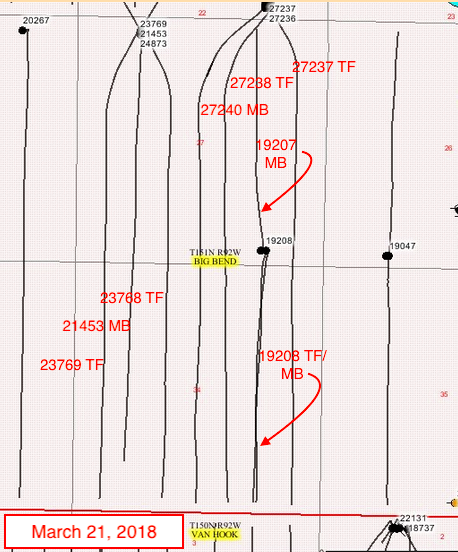 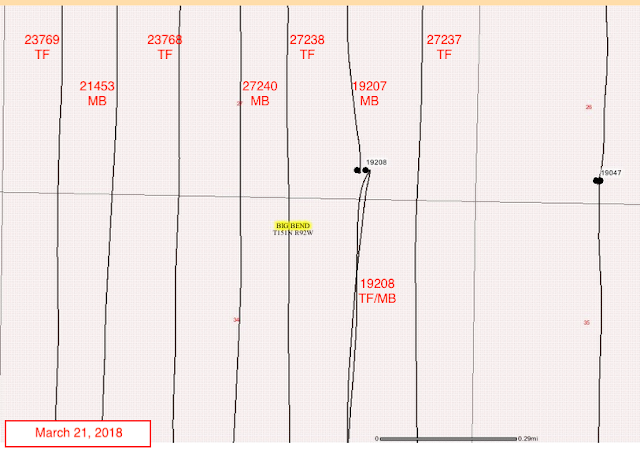