And that was it. Have a great weekend.

It might be my imagination but it certainly seems the fossil fuel energy story has moved faster in the past six months than expected.

Now we get this story -- big "thank you" to Don for alerting me to the story.

From CNBC:
Rule of thumb: a $7 spread (advantage to WTI) almost guarantees WTI will outsell Brent to Asia, all else being equal. If the spread is less, depends on a number of factors how much US crude oil China will import. The greater the spread over $7 the more likely that data point will be the single data point necessary for China to buy US oil.

Posted by Bruce Oksol at 4:01 PM No comments:


This is Art Berman suggesting that data in December, 2016, suggested that we were seeing the "beginning of the end" for the Bakken. The article begins:


It’s the beginning of the end for the Bakken Shale play.

The decline in Bakken oil production that started in January 2015 is probably not reversible. New well performance has deteriorated, gas-oil ratios have increased and water cuts are rising. Much of the reservoir energy from gas expansion is depleted and decline rates should accelerate. More drilling may increase daily output for awhile but won’t resolve the underlying problem of poorer well performance and declining per-well reserves. 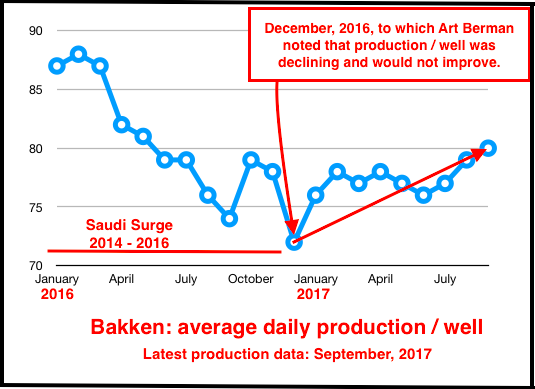 
"Shale is not a revolution -- it's a retirement party. Shale plays were not some great new idea. They became important only as more attractive plays were exhausted." -- Art Berman.

Re-posting: where will ChevronTexaco deploy its CAPEX in 2018?


In particular, Chevron is concentrating on increasing its investment in shale as it strives to boost its U.S. shale production next year. For 2018, the company intends to spend $4.3 billion in shale – up 70% year over year – the lion's share (or $3.3 billion) going to the lucrative Permian Basin of Texas and New Mexico alone.

The remaining $1 billion has been set aside for other shale investments.

Mideast. ISIS fell faster than even the US military imagined once President Trump came into office and turned the "war" over to the military. Another story we won't see in mainstream media.

Jerusalem. Meanwhile, terrorist organizations across the Mideast tell us that President Trump's decision to recognize undivided Jerusalem as the capital of Israel will derail the Mideast peace initiative. LOL. How long has there been a peace initiative going on in the Mideast? How many presidents have simply kicked this can down the road? Maybe bold action by this president will convince the terrorist organizations they may want to negotiate or risk seeing more unilateral action. It should be noted that President Trump did not do this overnight. He signed the "usual waiver" the first time he was presented with the decision to make; he took more than a year to finally make the decision. That's not a knee-jerk reaction.

Bitcoin: someone asked me the other day, "my thoughts on Bitcoin." I said I had no thoughts on Bitcoin. That was true then. But then Bitcoin raced from a few thousand dollars to $18,000 seemingly overnight, I took notice. There's really only one way for that to happen (with any commodity): someone is trying to "corner" the Bitcoin market. Someone is willing to pay whatever price is required to buy more Bitcoin. (This reminds me of the Hunt brothers and silver some decades ago.) Now, who in the world would have that kind of cash to corner the Bitcoin market, and who would also have a motive to do so? Maybe someone who can afford to buy a painting for half-a-billion dollars.

Prince Salman: buys a $450 million painting which may or may not be a Da Vinci to give as a gift to the U.A.E. (Abu Dhabi's new Louvre museum).
Posted by Bruce Oksol at 2:13 PM No comments:

From Argue Media today: the United States under Trump suspends federal flaring restrictions until 2019. Wow. So many story lines, but right now, the data points:
This following is true. We saw this phenomenon during the Bakken boom:


US producers sometimes flare natural gas so they can maximize production of more valuable oil, particularly in booming shale areas where gathering pipelines either do not exist or at full capacity.

It seems that some states, like North Dakota, have a pretty good handle on this.

The BLM was not only concerned about the economic viability of marginal wells, but like so many Obama-era rules, it was thought by the BLM that this rule would not "stand up to judicial review."

After that, a lot of global warming nonsense, as if one can monetize CO2 emissions affect on global warming. Especially since there is no correlation.

Whole Foods! Fast Money! Amazon is rallying on news the “Amazon Effect” is alive and well. United Natural Food, the food distributor whose largest customer is Amazon’s Whole Foods, said it is “continuing to see record sales and shipping unit volume” and incurred $25 million in additional out-of-stock costs as it races to keep up with demand.

ChevronTexaco: where will CVX deploy its CAPEX?


Of the American multinational's total 2018 capital expenditure, a little over 86% is planned to be incurred in its upstream operations.

In particular, Chevron is concentrating on increasing its investment in shale as it strives to boost its U.S. shale production next year. For 2018, the company intends to spend $4.3 billion in shale – up 70% year over year – the lion's share (or $3.3 billion) going to the lucrative Permian Basin of Texas and New Mexico alone.

The remaining $1 billion has been set aside for other shale investments.

Overall, the oil giant plans to shell out $6.6 billion for its domestic upstream operations. An additional $9.2 billion will target international upstream projects.

Over the last few years, majority of the capital expenditure in its 'Upstream' segment were dedicated to Australian LNG projects – Gorgon and Wheatstone – and the Tengiz field in Kazakhstan. But having completed both Gorgon and Wheatstone, Tengiz remains the only large capital project Chevron is committed to, for which the company has allocated $3.7 billion out of a total $5.5 billion for projects already underway. Meanwhile, Chevron has earmarked approximately $8.7 billion to sustain currently producing upstream assets.

Disclaimer: this is not an investment site. Do not make any investment, financial, job, relationship, or travel decisions based on what you read here or what you think you may have read here.

A couple of days ago I mentioned that I finally understood (at least to some extent) what is meant when guys like Rick Santelli talk about the Fed rate curve flattening or inverting. That's not as important as knowing who the "real" William Shakespeare was, but it's nice, after forty years of watching the market, to finally know what this means.

Likewise, now I finally understand (at least to some extent) what technicians mean when they talk about the "Death Cross." November Jobs Report -- Making America Great Again -- One Has To Ask: What Was Obama Doing For Eight Years? -- December 8, 2017 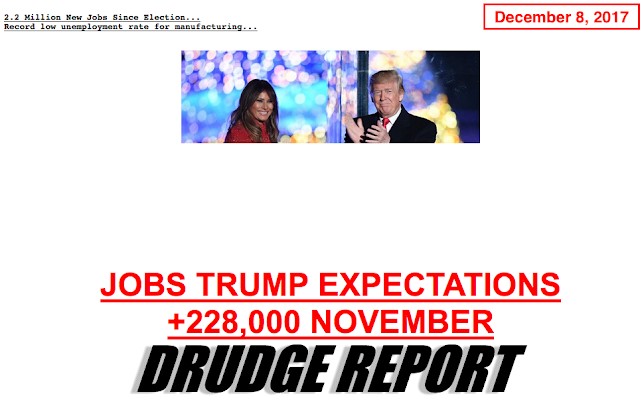 Not being widely reported: unemployment rate among Hispanics is 4.7% -- lowest on record in the US, via Twitter.

Again, one needs to ask: what was Obama doing for eight years.

We would not have seen these numbers under a Hillary administration.

Trump, during the campaign, said he would do this.

Former President Obama is being schooled. 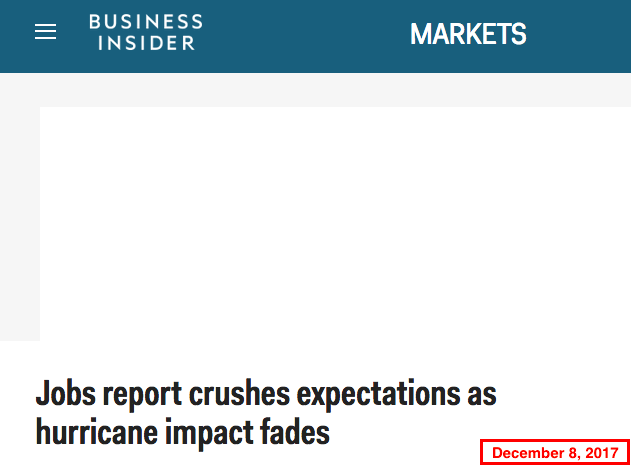 Later, 10:45 a.m. Central Time: see first comments regarding produced water. Here's data from FracFocus.
Wow, what a great memory. In my reply to the reader (see comments below) I mentioned that it was my "recollection" that 10 million gallons of water is a typical amount of water I see used in the Bakken for fracking a well.

Very, very interesting. I had not looked at FracFocus data for a well for quite some time, several months at least. If I find the time, I might look at similar data for some of the earlier EOG Clarks Creek wells. 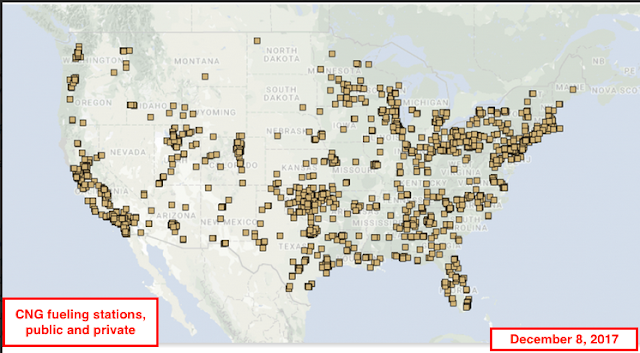 Don writes: with regard to the CNG fueling locations in North Dakota. These sites are all owned/operated by MDU. If one has an MDU account and a credit care you can use these fueling stations. That's probably true in other states, also. "So, available, but not really."

ICYMI: Basin Electric Power Cooperative recently started commercial operation of Phase III of its Pioneer Generation Station northwest of Williston. Units 1, 2, and 3 started commercial operation in 2014. Those three have a total generation capacity of 135 MW.  Phase III will feature first-of-its kind engines for Basin Electric: 12 natural gas-based reciprocating engines, each a generating capacity of 93 MW. Thus, a peaking generation station with total capacity of 247 MW which can provide fast-acting reactive power which will help stabilize the electric grid in the area, apparently necessary to offset the destabilizing effect of wind farms going up in the area.