A Note For The Granddaughters; Nothing About The Bakken -- February 4, 2017

I don't think I can read another book on Abraham Lincoln, or the Civil War. I was not even interested in reading the essay, at first. I think many of us have had our fill of Lincoln and the Civil War.

I was reminded of all that while reading the "Review" section of today's Wall Street Journal (see link above).


Elizabeth Brown Pryor, the author of a Lincoln Prize–winning biography of Robert E. Lee, had essentially completed a companion book, “Six Encounters With Lincoln: A President Confronts Democracy and Its Demons,” when she was killed in a car accident in the spring of 2015, at the age of 64.

In “Reading the Man: A Portrait of Robert E. Lee Through His Private Letters” (2007), Pryor had used a long-hidden cache of family correspondence to look behind the Confederacy’s greatest myth to reveal Lee as a man with feet of clay who beat his slaves and broke up every slave family save one to make big profits, selling “souls” down the river.


In the case of Pryor’s Lincoln, there are no long-hidden letters, just the skeptical eye of a professional civil servant. Pryor exploits her wealth of experience as a diplomat in the State Department to evaluate Lincoln as if he were the president she served.

Her six “encounters” are small historical moments, the kind that most of us overlook and that only a veteran of the governmental process, with knowledge of Capitol Hill and the newspaper-reading habits of those who attempt to forge policy, could tease into life. In each case, as Pryor offers us a critique of how Lincoln misplayed the moment, we sense the veteran diplomat who appreciates a valuable opportunity missed. Pryor is particularly adept at conveying the impossibility of Lincoln’s task: to represent a profoundly fractured country in which, as one of Lincoln’s friends put it, “the eyes of the whole nation will be upon you while unfortunately the ears of one half of it will be closed to any thing you say.”

I wasn't particularly interested in reading the essay, but after reading those two paragraphs, skimmed ahead. It was the last few paragraphs that piqued my interest, which sent me back to read the entire essay.

This is what caught my interest:


In her epilogue, Pryor casts Lincoln’s love of Shakespeare, particularly the history plays, as in part a reflection of what she sees as his outsize ego. From childhood, Lincoln had aspired to the presidency. His law partner William Herndon recalled that Lincoln was “the most ambitious man I ever saw or expect to see.” Such ambition, o’er-leaping class, education and experience, Pryor believes, raises questions about his fitness for office. She also regards the legitimacy of his election as suspect. Because both parties had split along regional lines, creating a four-way race that siphoned away Southern support, Lincoln was best placed to take votes from Stephen Douglas, edging himself to a technical if hollow victory. By the time of his inauguration, seven states had already seceded. He was sworn in as president of what was left of the Union. Pryor ends her book speculating on the “kind of desperation Abraham Lincoln must have felt, knowing . . . he was never . . . truly president of the entire United States.”

That certainly puts things into perspective, today, doesn't it?

The essay ends with these two paragraphs:


The insinuation that the drama of Civil War had a narcissistic angle for Lincoln is another place where, it seems likely, a more measured assessment would have emerged if Pryor had lived to complete the project. Although an ambitious man haunted by the judgment of history, Lincoln was remarkably self-effacing and devoid of ego: No narcissist would have tolerated with such equanimity the snubbing by his generals, the condescension of his cabinet and such merciless mockery by the press.

I read Lincoln’s fondness for Shakespeare with a different take-away and was moved by the pathos of Pryor’s description of how Lincoln kept with him, at all times, a pocket edition of Shakespeare that he would regularly pull out and read aloud, at length, often boring underlings forced to listen. Amid the profound loneliness of leadership, with a world crumbling around him, these plays were his consolation and these failed kings his companions: Macbeth, Richard II, Henry IV, King Lear. As he walked the wards of Washington’s hospitals, sleepless, bearing the weight of the intractable conundrums of American democracy, the suffering of the nation’s young men remorselessly imprinting itself upon his gaunt face and gangly form, the bard’s words were, excepting the Bible, the only wisdom our 16th president could find in his ever elusive hunt for, as Pryor puts it, “a route to deeper understanding of power, politics, and human folly.”

The entire essay is very well worth reading.


Drift Away, Rod Stewart
Posted by Bruce Oksol at 11:10 PM No comments:

The Rolfson N wells (a graphic will be provided once the wells come off the confidential list): 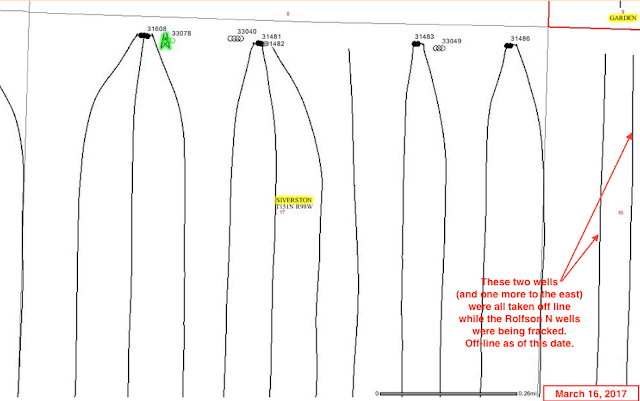 Random Example Of Moderate Jump In Production After Being Off-Line For About Six Months -- February 4, 2017

We are being told that by taking wells off-line for a significant number of months (for purposes of discussion, 3 - 7 months) all wells -- not just Bakken wells, apparently, but all wells, will show a bump up in production.