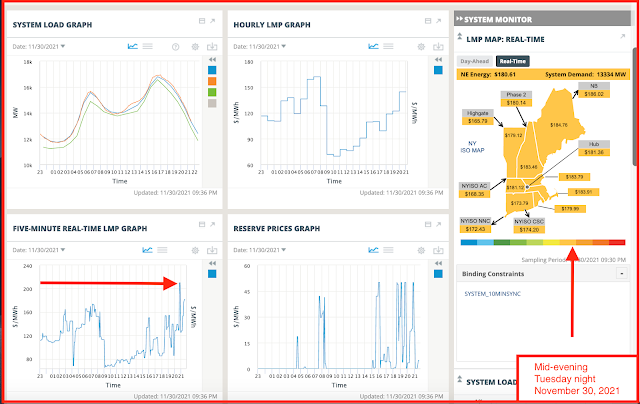 Here is the fuel mix: 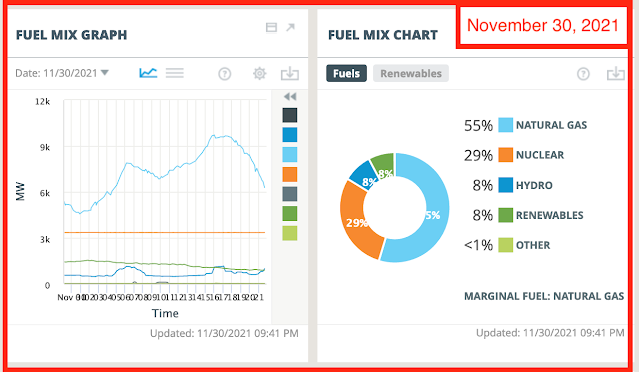 What jumps out at you when you compare the "costs" with the "fuel mix"?

A reader posits the following to explain this phenomenon:

As I also have been closely following the New England electricity 'drama',  I have been a little puzzled as to why the spot pricing has been so high between ~1 AM and ~6 AM as the demand is relatively low.

Although not 100% certain, I think I understand what is unfolding.
Components ...
1. Day Ahead/Cleared pricing
2. Status of 'Renewables' (sic) ... if the wind be 'ablowin'
3. Temperature (translates into the price AND availability of natgas)
4. Competitive game of 'chicken' amongst hydro, natgas, coal, and oil burning generators
Summary (includes a bit of informed speculation) ...

1. The Day Ahead pricing (can be seen on the chart 'LMP Map: Real Time' by clicking non-default tab 'Day Ahead' tab which is next to default 'Real Time' tab) is what the ISO folks contract with the various generators as to how much, and at what price, electricity will be available at that time on the next day. These are 'micro sliced' into 5 minute increments.
This amount is reflected by the green line in the first chart 'System Load' and labelled 'Cleared'.
2. The wind contribution (sic) has been relatively low these past few weeks (this has been a BIG contributing factor in Europe's and the UK's current predicament ... grossly under reported by MSM).
This can easily be seen, albeit not in detail, in the 'Fuel Mix Graph' by the green line. (Precise amounts can easily be found by clicking the non-default setting of the 3 grey horizontal lines which is next to the default 'graph' setting [right angle with squiggly line]. The precisely generated amounts are displayed in ~10 minute increments and labelled by source, ie., nuclear, wind, NaturalGas LandfillGas, etc.).
3. Now, come midnight to, say, 6 in the morning, the temperatures have been cold throughout New England these past few weeks.
Consequences? Very high consumption by customers for heat-generating purposes. This is crucial ... the customers of natgas get priority for the available natgas - they have paid for the pipes via their monthly billings. About 5 1/2 Bcfd flows into New England. Power plants reliant upon piped natgas simply cannot be guaranteed supply. Some DO have onsite, back up fuel oil, but this is both limited and expensive.
Bottom line, look to 10 day temperature forecasts to sense the overnight electricity pricing.
Wind forecasts also play a role, but - my experience - far from precise.
4. Power generators (hydro versus oil-burners) can bid against one another to obtain as high a price as they can in the Spot Market while also satisfying reliability requirements of ISO, that is, they are able to generate electricity on short notice.
If you look at the current 'Fuel Mix Graph', you will see a tiny input at the 5 and 8 AM times for 'Oil' sourced.
Likewise, the high price spikes on the 'Five Minute Real-Time LMP Graph'  coincides with the input spike in 'Hydro' production.
Essentially, any provider of electricity will jump in and produce if the fuel is available (natgas/fuel oil/coal) AND a profitable outcome is achievable.
Bottom bottom line ... the New England folks have boxed themselves into an extremely precarious corner whereby they are now competing - with a global market, no less - for means of 'normal' electricity supplies (forget about affordable ... way too late), and this is highly dependent upon weather conditions.
This is EXACTLY what Australia, California, Germany, AND the UK have all experienced or are right now experiencing.
That it seems to be coming as a surprise is, in itself, the biggest surprise.

Posted by Bruce Oksol at 7:04 PM No comments:

FracFocus posts frack data well after the fact, or however one wants to say that.

But because the NDIC is not updating their data, we may end up using FracFocus as another way to try to keep track of what's going on in the Bakken.

To the best of my knowledge, FracFocus is chronologic, in other words, the API numbers which FracFocus uses, are chronologic by state.

Kraken's "Red" wells are up in Burg oil field, north of Williams County, in Divide County.

That's the only Kraken Red well the NDIC has posted.

CLR Looks To Have Thirteen Wells On This Drilling Unit -- Cedar Coulee -- CLR Well With Jump In Production -- November 30, 2021

This is a case, not a permit, from the October, 2021, hearing dockets.

There it is. CLR is drilling new Bang wells in this drilling unit and the NDIC map is not being updated. Amazing.

See the "definitive active rig report" being reported by the "milliondollarway" blog because NDIC is not updating their map.

And here it is, the graphic, with the CLR Bang wells that are apparently being drilled. I think there was a jump in production, and the neighboring wells haven't even been fracked yet. Because there is no scout ticket, I don't have the API number which means I can't see whether this well has been fracked or not.

A Closer Look Where MRO May Have Upwards Of Thirty-One Wells Along One Section Line -- November 30, 2021

The case, this is a case, not a permit:

This one is interesting. There are already sixteen wells along the section line between section 7 and section 18 but those would be 1280-acre spacing. So I assume these fourteen wells are in addition to the sixteen locations already permitted.

If these are all 1280-acre spacing, then there will be fourteen more wells along this section line. Overwhelming.

Posted by Bruce Oksol at 1:54 PM No comments:

Before we get to the Salvation Army, this breaking announcement from Dr Fauci: 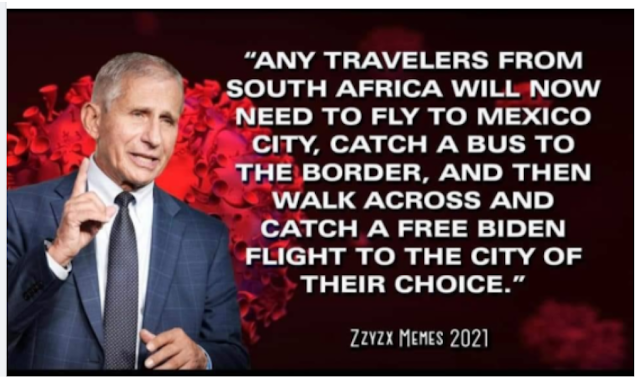 Now, back to the Salvation Army. 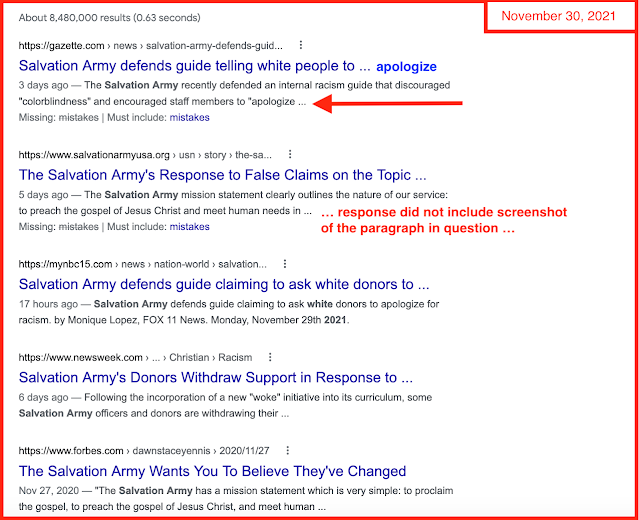 The Salvation Army recently defended an internal racism guide that discouraged "colorblindness" and encouraged staff members to "apologize for being white" after the guide faced backlash. [I would like to see the original guide.]

"The Salvation Army has occasionally published study guides on various complex topics, including race, to help foster positive conversations and reflection among Salvationists," the Thursday statement said. "The hope is that by openly discussing these issues, we can encourage a more thoughtful organization that is better positioned to serve those in need. These guides are solely designed for internal use. No one is being told how to think. Period."

In an accompanying Study Guide on Racism, the Salvation Army says whites are racist. “The subtle nature of racism is such that people who are not consciously racist easily function with the privileges, empowerment and benefits of the dominant ethnicity, thus unintentionally perpetuating injustice,” it says.

“We must stop denying the existence of individual and systemic/institutional racism. They exist, and are still at work to keep White Americans in power,” the lesson says.

The Army’s declaration comes as liberal media are blasting Thanksgiving as a holiday that promotes genocide and white supremacy.

“What is Thanksgiving to Indigenous people? ‘A day of mourning,'” a USA Today headline on Tuesday said.

“For many, rather than a celebration of peace and shared prosperity between Native Americans and Pilgrims, Thanksgiving represents the dark shadow of genocide and the resilience of Native people,” said the piece. “Every tribe and every individual may have a different way of spending Thanksgiving. Some will gather with their families and share a meal, exchanging prayers and stories from the rich oral history of Native Americans. Others will fast for the entire day.”

The paper quoted American Indian Dennis W. Zotigh saying that Thanksgiving is “a day of mourning.” “To most natives, Thanksgiving is not a celebration,” Zotigh said. “Natives, particularly in the New England area, remember this attempted genocide as a factual part of their history and are reminded each year during the modern Thanksgiving.”

A weather service called Currently also posted an article Tuesday suggesting that Americans who celebrate the holiday are “hurting” the Native American community.

From the NDIC hearing dockets, Wednesday, December 15, 2021. Again, this is a case, not a permit.

There are already nine wells in this drilling unit, so MRO is simply asking for another single well.

Two Wells Coming Off The Confidential List; Neither Will Show Any Production Data -- November 30, 2021 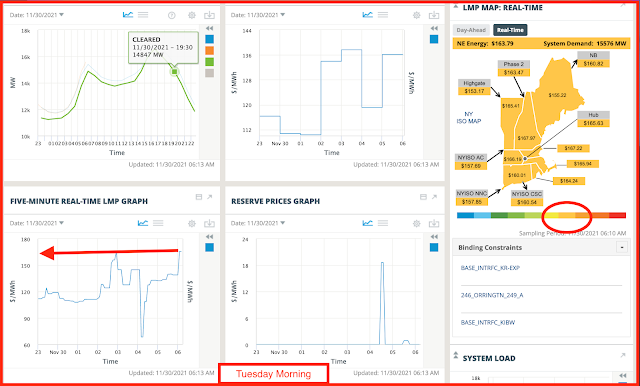 Re-posting. This was from last Friday, the day after Thanksgiving, four days ago, November 26, 2021:

I'm tracking this for a reason. I think it becomes a bigger story than many folks might realize now. Exhibits A, B, and C: 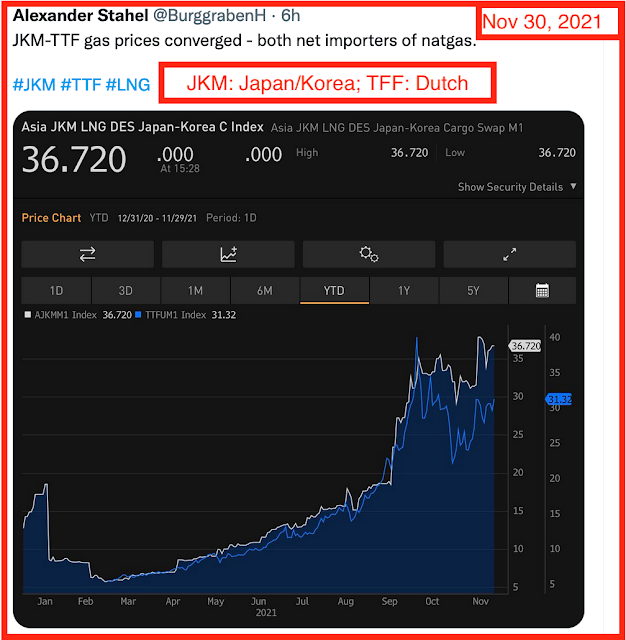 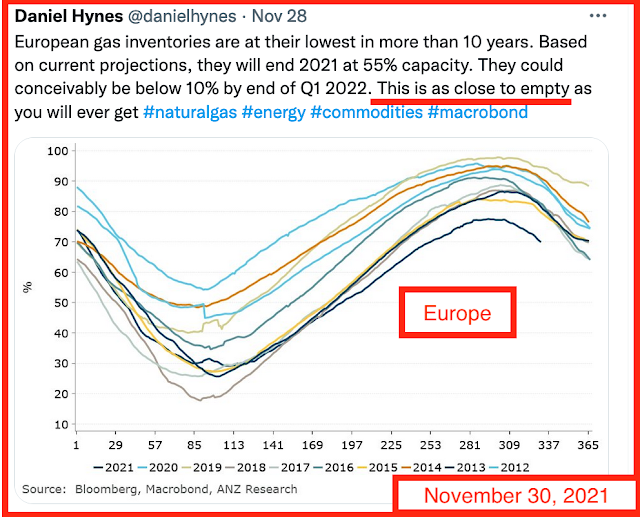 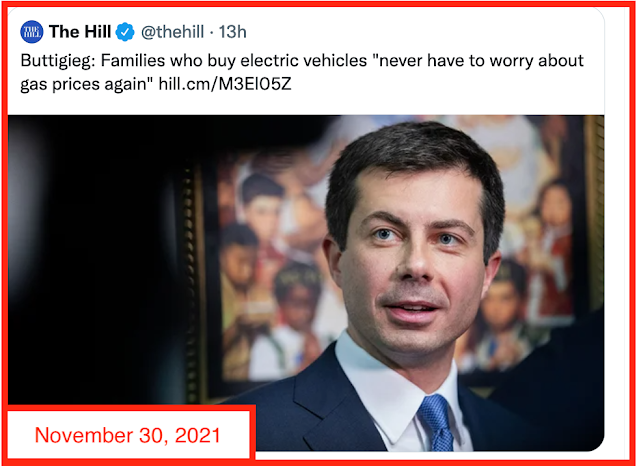 One of the FBI's most wanted fugitives for fifty-two years, died of natural causes in an affluent suburb north of Boston. Fascinating story. Link here.

Since about the year 2000 we've lived in Texas. First, San Antonio, and then we moved to Grapevine, TX, in 2013, which we thought might be the best suburb in Texas. Then, due to the Texas freeze, water pipes freezing in our apartment complex (we were relatively inconvenienced) we moved to an apartment complex in .... Euless, TX, just a half-mile from where we had been living.

Euless is about a five-minute drive west of the Dallas-Ft Worth International Airport (DFW), and near the tip of the isosceles triangle formed by Grapevine to the north, Dallas to the southeast, and Ft Worth to the southwest.

This morning, I see that a reader has sent me this article: Euless is the best place in the country to live, according to The New York Times.

I'll have to fact check this, of course, but the article states:

That's according to "Everyone’s Moving to Texas. Here’s Why," a new opinion column from the Times' Farhad Manjoo, who looked at a lot of data and applied a strict set of parameters to determine where would be the best place in the country to move to. Seven of the top 10 locations are in Texas, and all of those Texan cities are in North Texas.

Wow, I hope New Yorkers continue to move to Florida. Of course, Jerry Jeff Walker was a former New Yorker.

History may not repeat itself but it certainly does seem to rhyme.

It looks like folks are going back to look at the "history" of March, 2020, with the first major lock downs due to Covid.

RBN Energy: NGL markets have been up, down, all around. What will winter and 2022 bring?

If there was ever a year that proves NGLs march to the beat of a different drummer, 2021 was it.  Compared to pre-pandemic volumes, production is up, not down. It’s the same story for exports. Price behavior has been even more extraordinary. We’ve seen startling counter-seasonal price swings in propane and butane markets. Ethane has been dancing to the tune of volatile natural gas prices. The wackiness has even extended to natural gasoline, which this summer enjoyed seven weeks as the preferred feedstock for U.S. flexible steam crackers. Heck, it’s not even winter yet. And 2022 is likely to be every bit as chaotic. In today’s RBN blog, we begin a blog series discussing recent developments in NGL markets and take a look at what lies ahead.

To make sense of what is going on, it is always best to start at the beginning — and that is production.  Specifically, NGL production from natural gas processing. Some NGLs are produced at refineries, but those volumes are relatively small and have not changed materially over the years. As noted above, NGL production is up during 2021. In fact, average 2021 NGL production is about 10% higher than in pre-COVID 2019. That compares with crude oil production, which is down about 10% since 2019, and natural gas, which is flat over the same period.

Posted by Bruce Oksol at 6:33 AM No comments: