Link here.
Posted by Bruce Oksol at 11:15 PM No comments:

If, indeed, this well was not re-fracked, the jump in production is quite extraordinary after coming back on line.
Posted by Bruce Oksol at 11:07 PM No comments:

CLR's Anna Wells Have Been Fracked; Still On SI/NC Status; Should Have Results Soon -- June 5, 2017

The "previous note" below was posted April 25, 2017. In that note, I suggested that one should watch the status of #23279 -- when it comes off-line, that might suggest neighboring wells were about to be fracked.

That suggests the wells have been fracked.

Note to self: this is simply a random note posted as an update. This post will not be updated.

Random update on some wells that a reader was interested in some months ago.

The "original note":
As noted above, #23279 is now off-line, suggesting that the CLR Anna well pad could soon be completed. Just a hunch.

Note to self: this is simply a random note posted as an update. This post will not be updated.
Posted by Bruce Oksol at 10:52 PM No comments:

The Incredible Statoil Skarston Wells Have Been Updated -- June 5, 2017

About half of the Skarston wells that were taken off line 12/16 are back on-line; about half are still off-line. Incredible production continues for those back on-line.
Posted by Bruce Oksol at 10:21 PM No comments:

Now, both MI5 and Scotland Yard admit they "had" the London Bridge jihadist in their grasp but let him go. 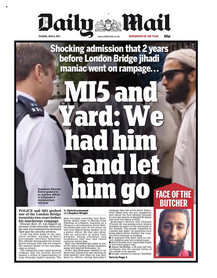 Posted by Bruce Oksol at 6:13 PM No comments:

Later, 7:56 p.m. Central Time: BusinessInsider has the same story. AAA premiums could surge as much as 30%.

This is really, really interesting. I happened to catch this "consideration" when reading an article on Tesla over at SeekingAlpha just a couple of days ago. A contributor to SeekingAlpha predicted this would happen, and here it is, from Jalopnik: AAA raises insurance rates on Tesla vehicles because repairs are so costly.

Tesla decried the move in near Trumpian-fashion as being based on an analysis that’s “not reflective of reality.” AAA based its analysis off data from the Highway Loss Data Institute, Automotive News reports, and said premiums for some Tesla vehicles could spike as much as 30 percent.

Other insurers, like State Farm and Geico, wouldn’t tell the publication if Tesla owners would see an increase in rates, but said that claims data is a significant factor in calculating a rate.


The issue appears to boil down to how the Institute analyzed the Model S and X. The News says the S is classified as a “large luxury vehicle,” placing it among the Volvo XC70, Audi A6 and BMW 5 series. The Institute says that the Model S and X were both involved in more than 40 percent more claims than the average vehicle in their class.

Tesla says this is bogus, and compares the S and X “to cars that are not remotely peers, including even a Volvo station wagon.”

Ouch. If the vehicles were compared to similar brands, Tesla claimed its crash data wouldn’t be nearly as high.

From the linked SeekingAlpha article above:

Due to its quality problems and high repair costs, Tesla also has an insurance problem. We predict that Tesla cars will end up having some of the highest insurance costs. These costs drive up the cost of ownership and further drive down the desirability and resale value of older Tesla cars.

And then that article links to this SeekingAlpha article: Tesla May Face Negative Growth In 2017 As Insurance Troubles Mount And China EV Sales Suffer.

Over time, many (most?) SeekingAlpha articles are archived and require a subscription to access.


Whether EOG Resources s the Apple  of unconventional oil is a question pondered by IBD in a recent article. It continues to use the latest and greatest technologies, and set the pace for the competition.

EOG uses many technologies. It would be difficult to cover all of the known (and unknown) ways it increases production in one article, but we are covering EOG's production from this core area. This should better show how much upside other operators have, if it can duplicate results. The beauty of the unconventional oil industry is its ability to replicate and improve. Many have said these results have topped out. This has been the case for years, and those have only been proven wrong.

This post appeared on the very day that EOG reported some incredible wells with high-intensity fracks in the Bakken.
Posted by Bruce Oksol at 11:31 AM No comments:


RBN Energy: growing opportunities for distributing US refined products in Mexico. For those "tracking" the US energy revolution and how it will play out in Mexico, this is a great article. Archived.

Five High-Intensity Fracks Reported Over The Weekend -- A Reader Suspected This -- June 5, 2017

I will come back to this later when I have a bit more time, but here's the "raw" data. This is quite spectacular. Four EOG wells and one CLR well:
I track high-intensity fracks here.

I can't say for sure, but it's possible this was the previous record for sand in the Bakken:

But first this breakfast note: we lived overseas for thirteen years, much of that time in close proximity to Belgium. Over the years, I've tasted a lot of waffles, including "real" Belgian waffles. But I have to say my favorite waffles are the little Mickey Mouse waffles I have almost every day, that I make from Bisquick, using the recipe on the box. Sophia and I make about 14 at a time, freeze them, and they last about ten days.

Now that we have that out of the way, back to all the news hitting the airwaves today.

The big story is the diplomatic tiff in the Mideast. That took me by complete surprise; clearly out of left field as they say. I have some initial thoughts but am waiting for a more in-depth story from the WSJ to get a better understanding of what's going on and what it might mean. No links for now; story everywhere.

Coal? The other big story of the day comes from John Kemp, London-based Reuters analyst, who notes that natural gas prices tumble as power producers switch back to coal. I thought coal was dead.

Donald Trump continues to tweet that after terrorist events in London, the city's Muslim mayor said "there is no reason to be alarmed." The question that folks are missing: was the Muslim mayor reassuring Londoners in general, or was he reassuring the families and co-conspirators of the terrorists need not be alarmed.

Back to Qatar. Time to get out the maps. Saudi Arabia says it will shut down sea, airspace, and land crossings with Qatar.

Air conditioning: BBC link here. Climate change. Air conditioning "changed" the US. Now, it's about to change the world. At the very end of a very long article:


Then there's the electricity that powers air conditioning - often made by burning gas or coal - and the coolants air conditioners use, many of which are powerful greenhouse gases when they leak.

Air conditioning technology is getting cleaner and greener.

But demand is growing so quickly that - even if the optimists are right about possible efficiency gains - there will be an eightfold increase in energy consumption by 2050. That's worrying news for climate change. When will we get inventions to control the outdoor weather, too?

Saudi's official selling price for Asian-bound crude oil for July may have been set too high -- traders. Platts.  Saudi Aramco raised the OSP by 35 to 95 cents/bbl compared to the June OSP.

Saudi predicts success: at Platts -- Saudi's Falih says that we will see impact of cuts in July, 2017.

Libya: at Bloomberg -- Libya's rapid increase in oil production is heading toward a hard ceiling.
Wood Mackenzie says Libya's ability to pump more oil will son reach a limit -- and won't be enough to upset an oversupplied market. 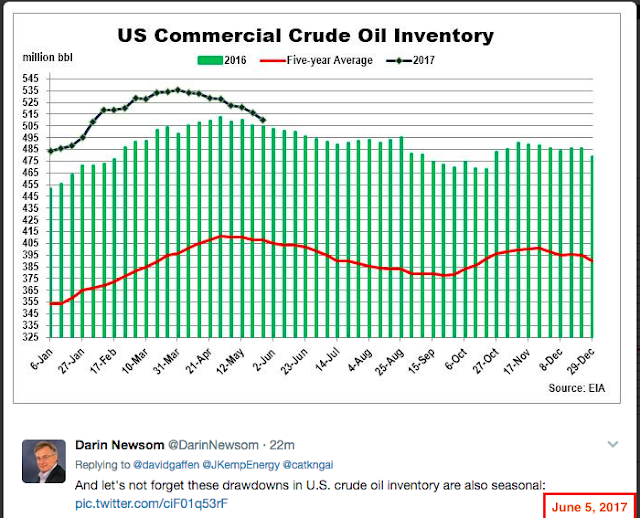