A reader sent me this note as a comment to another post which I posted earlier, but I thought it would be interesting to take a look at this well. First the comment that the reader sent me:


Take a look at BR's #17118 just shows the potential of the untapped barrels by refracking old wells. It has produced more bbls in 9 months since the refrack than it did in the initial 6 years of production.

Now, to search the blog to see if I've talked about this well before:
Nope, it's only been mentioned once before, back on November 19, 2010.


So, what gives? What's the file report have to say?


BR requests: to restimulate (re-frack) the lateral and increase production. The well was drilled and completed as an open hole well with a single stage completion. Precision 825 will be used to install a 4 1/2" liner and and the well restimulated (re-fracked).

BR does not currently use any of the following in fracking:
There is an interesting letter on file with regard to royalties to a mineral owner. Mineral owners may be interested in reading the letter. The part that interested me:


If this was back-payments for production sold from the two wells, your interest may not be great enough to exceed the requirement in the paragraph aboeve (greater than $50). Oil prices in May 2007 were around $60/barrel and rose to over $140/barrel in July 2008. Unfortunately, prices dropped drastically to a low of around $20/barrel in December 2008 and this is reducing your payments significantly from what they were last year.

Original drilling / geologist's summary:
Completion:
Think of all the open-hole fracks that operators might be interested in re-fracking. I may have missed it, but I did not see the amount of proppant used or the number of stages for this re-frack.

The original application said the target zone was the "Bakken," not otherwise specified.

In a long note like this, there will be factual and typographical errors. If this information is important to you go to the source.

Look at the graphic: of the nine wells, one was recently re-fracked, greatly increasing production; the other 8 are waiting to be completed. And this is just one section in the entire Bakken. 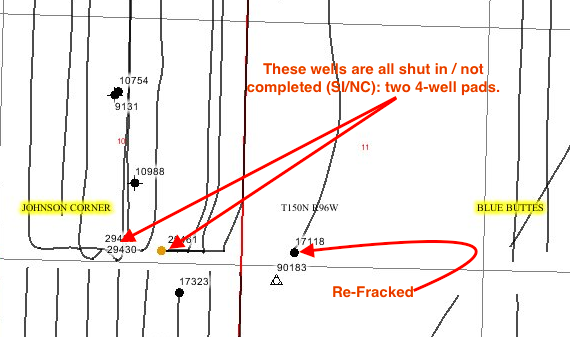 There's one more data point about this well that is of interest, but I am purposely not posting it. I am posting this teaser in case someone else points it out, and I can say that I noted it also (for bragging purposes).


Best of Willie Nelson
Posted by Bruce Oksol at 10:42 PM No comments:


While the nation was celebrating the Fourth of July, three companies broke an oil industry record in the Eagle Ford shale just south of San Antonio.

The 140-train car shipment arrived at Twin Eagle's facility at the Mission Rail Park in Elmendorf on the Fourth of July.

Twin Eagle has been regularly receiving trains with 130 railcars filled with frac sand but the shipment received this weekend broke a national record.

Powered by four diesel engines and measuring 6,200 feet long, the shipment was certified by Union Pacific as the largest single frac sand rail delivery in the United States.

This is very, very interesting:

Recent industry reports show that new drilling and general demand for frac sand is down but the amount of the finely ground silica used per well on the remaining shale oil and natural gas drilling sites is increasing.

More data points valuable for future reading and for newbies:

The only personal disappointment: BNSF did not set the national record in the Bakken.

This afternoon our adult daughter sent several photographs of our one-year-old granddaughter visiting the Ft Worth Zoo -- or is the Dallas Zoo -- probably the Dallas Zoo. Doesn't matter. 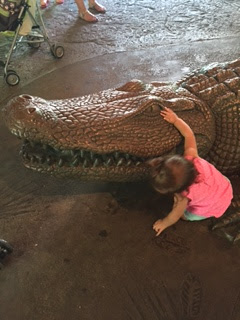 My, what big teeth you have. 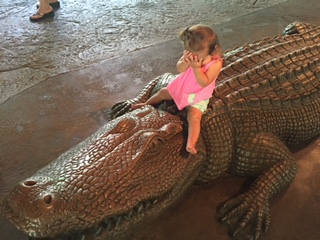 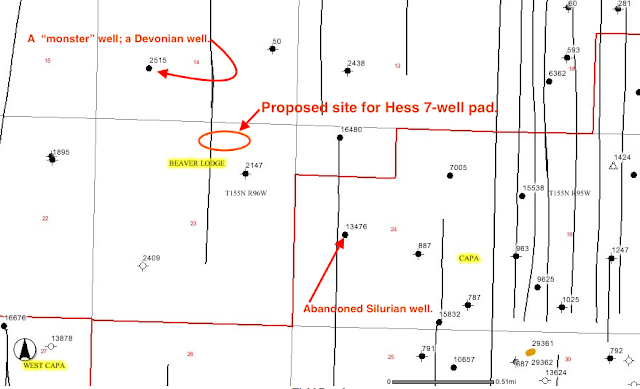 Houston-based Linn Energy LLC announced on July 6 that it has finalized partnerships for future developments and has sold assets in Texas.
According to a statement from the company, Linn Energy signed a definitive agreement to sell its remaining assets in Howard County, Texas, for $281 million to an undisclosed buyer.
The property, located northeast of Midland, Texas, in the Permian Basin, includes approximately 6,400 acres for horizontal drilling and 133 gross wells.

For newbies: gross wells are all wells in which a company has an operating interest, but the operating interest could be as low as 3 to 5 percent, or as much as 90% or more. A more helpful statistic would have been the number of net wells. For example, 5% in each of 20 wells would equal one net well.


Filling up at the pump is often painful in California, where drivers tend to pay more for gasoline than in most other states.

Many industry watchers attribute the high fuel costs to unique forces — chiefly California's clean-burning gasoline formula — that have isolated the market and kept it tightly balanced between supply and demand.

But some consumer advocates and politicians allege that price manipulation by oil refiners is to blame.

In February, Tesoro Corp. idled its Northern California refinery in Martinez after a nationwide union walkout. Next, Exxon Mobil Corp. scaled back operations at its Torrance facility when an explosion damaged an air pollution monitoring unit.

Average pump prices shot up nearly a dollar before floating back down. Last week, a gallon of regular gasoline cost an average of $3.44 in California, more than 20 cents lower than a week earlier and about 70 cents lower than a year earlier, according to AAA. But drivers in the state are still paying nearly 70 cents more than the national average. [It looks like 20 cents of that 70 cents can be attributed to California's state tax; see below.)

Whether those higher prices are a natural economic reaction or a sign of collusion between companies is up for debate.

State taxes on gasoline at this site. Some selected examples:
Average commute in the United States by state:
By county:
Unless I missed it, the LA Times story linked above mentioned nothing about a) the gasoline formulation regulations in California; and, b) how California activists continue to work to shut down California refineries. The LA Times looks more and more like a blog.
Knock the state tax on gasoline down by 20 cents, and the delta becomes even less.

The real issue is not that Californians are paying 70 cents more per gallon than the US average, but why is gasoline so expensive nationwide considering Bakken oil is priced as low as $40 / bbl?

You Belong To The City, Glenn Frey
Posted by Bruce Oksol at 10:54 AM No comments:

I'm not saying everything's perfect, but if one wants to see how closely the NDIC regulates the oil and gas industry, perhaps file #29659 is as good as any.

First, a screenshot of the request:

Then, the screenshot of the diagram depicting the requested change: 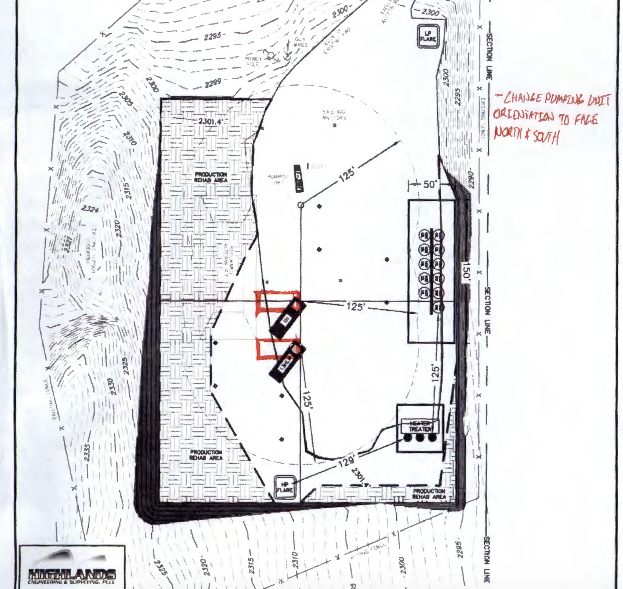 Monday, July 6, 2015 -- Call It A Night, The Party's Over -- The Day Greece Collapsed; The EU Collapsed: Asian Stock Markets Crashed; And The Usual Big Daytona 500 Crash


RBN Energy: don't expect any increase in the price of crude oil any time soon.


U.S refiners have been processing a lot of crude so far this summer and utilization rates remain high. Crude production has leveled off and is expected by the Energy Information Administration’s (EIA) Short Term Energy Outlook to decline slightly during the second half of 2015. But the early summer market sentiment that drove crude prices up to $60/Bbl on the back of these fundamentals appears to have lost steam. Today we conclude our analysis of short term crude price prospects.

In the first part of this two-part series (see Why Are WTI Prices Stuck at $60/Bbl?) we looked at the evolution of crude prices for domestic benchmark West Texas Intermediate (WTI) since they began falling a year ago from a high over $107/Bbl in June 2014 to a low under $44/Bbl on March 17, 2015 – recovering since then to the $60/Bbl range in May and June.

Last October falling crude prices set in motion a market condition known as contango where future prices are expected to be higher than spot prices today – encouraging the use of storage to “save” cheap crude today for use when prices recover (see Skipping The Crude Contango). This contango incentive led to a huge build up in crude oil inventory – especially at the Cushing, OK trading hub (where CME/NYMEX WTI futures contracts are delivered) as well as in the Gulf Coast region. Our analysis showed that since March 2015 – as the contango spread has narrowed – demand for crude has picked up as high margins encouraged refiners to process more oil nationwide.

Higher demand for oil contributed to an end to the crude inventory build and a stock drawdown at Cushing and the Gulf Coast since April. With demand higher and an inventory drawdown combined with a narrowing contango - some analysts expected the WTI crude price “rehab” to $60/Bbl in April to continue towards $70 or even $75/Bbl. But prices have remained range bound close to $60/Bbl over the past two months amid continued concerns about an overall supply surplus versus demand.

Regular readers know what is coming next:


The Party's Over, Willie Nelson


This time we look at crude production as well as imports to understand the demand for crude versus available supply and then relate these changing fundamentals back to prospects for a further crude price “rehab” this year.


In 1956, Nelson moved from Fort Worth, Texas to Portland, Oregon. He soon found a job on KVAN, in Vancouver, Washington, hosting the show The Western Express. Nelson became a popular DJ, while he continued to make live performances. During this time he wrote "The Party's Over".

When he moved to Houston, Texas, Nelson stopped by the Esquire Ballroom to sell his original songs to house band singer Larry Butler. Butler refused to purchase the songs, and instead signed Nelson to his band.

Butler would at the end of the show let Nelson sing solo "The Party's Over" as a closer.
During his time in Fort Worth, Nelson was signed by Pappy Daily to D Records. While in Houston, he recorded sides for the label. Nelson was also hired by guitar instructor Paul Buskirk to work as an instructor in his school.