All of a sudden, Danaher keeps popping up. I think this is the third time in about three weeks Danaher has popped up in the news.

Link to The WSJ.

EQT AB and Goldman Sachs Group Inc.’s investment arm are in advanced talks to buy contract-research organization Parexel International Corp. for nearly $9 billion including debt, according to people familiar with the matter, the latest healthcare deal for the private-equity firm.

Parexel runs clinical trials and provides other services for drugmakers and is owned by Pamplona Capital Management. A sale to EQT and Goldman could be completed this week, assuming talks don’t fall apart, the people said. The business, which is based in Massachusetts and North Carolina, had drawn interest from both private-equity and strategic bidders, they said.

EQT oversees €67 billion in assets, equivalent to about $79 billion, and its focuses include real estate, technology, infrastructure and healthcare. It has been particularly active as one of the largest private healthcare investors recently: Last month, the firm sold Aldevron, which manufactures ingredients used in vaccines, to Danaher Corp. for $9.6 billion, and late last year it took public Certara Inc., which specializes in computer-based modeling for medical research. Along with a partner, EQT is also a majority owner of Waystar, which makes software used by healthcare providers. A deal for Parexel would be one of its largest acquisitions to date.

Note: this is, hands down, one of the most boring things I to do each quarter. I doubt anyone really looks at it but the day I quit doing this will be the day I miss posting something important. The word "important" is used loosely. Very loosely.

This is so boring that I actually didn't record a thing for 1Q20, one year ago. LOL.

This is linked at the top of the sidebar at the right during earnings season. After earnings -- pretty much after PXD and Apple posts their earnings -- this post will move back into obscurity.


Disclaimer: this is not an investment site.

This is not an investment site. Do not make any investment, financial, job, travel, or relationship decisions based on what you read here or what you think you may have read here. If this is important to you, go to the source. There will be content and typographical errors on this page. If something looks wrong, it probably is.

A lot of anticipation and excitement over this quarter's earnings reports. We're starting to come out of the global pandemic; the lockdowns began in March, 2020, about a year ago. The stock market has had an incredible run since the presidential election about nine months ago.

Most interesting: the oil companies.

Oil giant ConocoPhillips recently unveiled its 10-year plan. The key takeaway is that the company expects to produce a massive amount of cash over the coming decade, even if oil prices decline, while returning a significant portion of that money to shareholders. ConocoPhillips has worked hard over the years to reduce costs.

At $50 oil, ConocoPhillips could generate $70 billion of free cash flow over the next 10 years after investing enough money to maintain its production rate and enhance its returns. To put that into perspective, ConocoPhillips' current market capitalization is less than $82 billion. 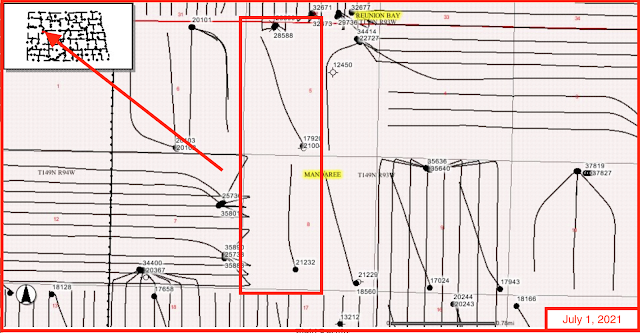 The three proposed three 2560-drilling units represented by different-colored stars in each of the various sections. 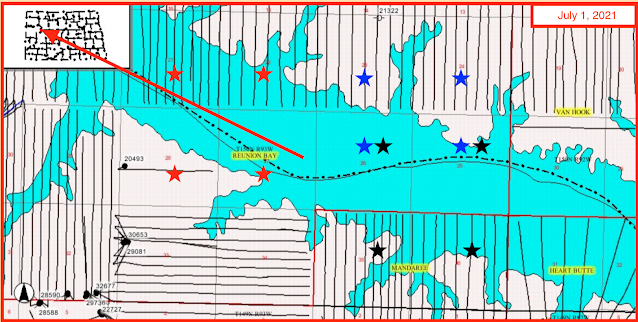 I don't know if folks remember this (I did not), when Equinor exited the Bakken, it sold all its Bakken assets to Grayson Mill Energy (link here).

What brought that up?

Grayson Mill Energy has one case in the July, 2021, NDIC hearing dockets, this is a case, not a permit:

This should be a million-bbl EUR well.

Equinor has/had two wells in this immediate area. One was a dud and is permanently abandoned; the other is a great well: 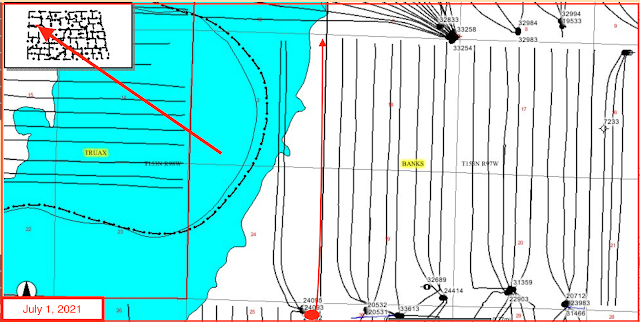 It Will Cost You An Arm And Leg To Get There, But The Family Reunion Cookout Will Be Less Expensive Than Last Year -- Farm Bureau -- July 1, 2021

Only Pravda could have done better, link here: 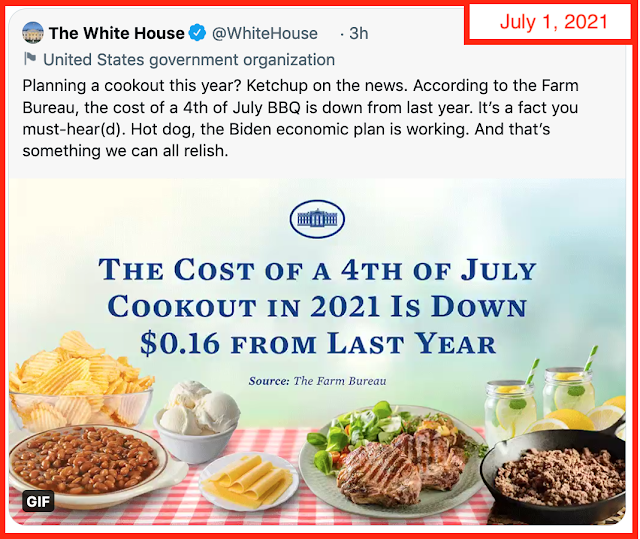 What's gasoline costing you in your neighborhood?

These two MRO wells came off the confidential list today. They are on the MRO Chauncey-Winona pad which is tracked here.

Earnings season begins ... but I have to laugh. It seems earnings are reported throughiyt the entire quarter, certainly through the first six weeks of any given quarter.

Surprised? Still one of my favorite tweets. Link here.

One permit was canceled:

The other day four Rimrock wells with the following names were noted on the blog:

I'm still traveling. I have to take a break from blogging. Sorry. I assume I will be back later today.

Until I get back, EN-JOY the Hess EN-Joyce wells.

I think this expresses, best, my mood right now (https://www.youtube.com/watch?v=1jBS3UjDkWY).

I was going to post "Reflections" from Lana Elaine Fraser but that will have to wait.

Chip supply: Ford announces cut in production; not enough chips. It could take fifteen months to get inventory levels "back to normal." Healthy demand for vehicles will continue over the next twenty-four months. Normal US inventory, 4 million vehicles on lots; today about 1.5, maybe 2.0 million vehicles on lots. Fifty percent of workers not returning to work are not returning to work because they fear being exposed to Covid-19. This suggests to me there are a lot of folks who will be shifting from mass transportation to private vehicles: a) personally owned; b) Enterprise rental; and, c) Uber.

Enterprise rental: if auto rental agencies are/were able to get hands on vehicles to rent, they will/would do very, very well. The problem: the cars are simply not there. For investors: be prepared to be nimble.

July 11, 2021: the three more recently completed EN-Joyce wells are starting to report "runs." See this post. These are huge wells and fracks seem to be "moderate" fracks.

The Manitou oil field is not a "big field" in the Bakken, but it looks much more promising all of a sudden. Look at how far "we've" come. The early EN-Joyce wells were not impressive. Drilled in 2014, they have produced less than 300,000 bbls crude oil cumulative. In general, these wells maxed out in the first full month of production with 6,000 to 12,000 bbls over thirty days and declined quickly.

Results like this explain why operators in the Bakken do not need to add rigs to maintain the company's production in the Bakken. Any increase in the number of active rigs in the Bakken will be "new" operators bringing one rig on line, and a couple of the "older" operators maybe adding another rig.

Calendar year 2021 will be fascinating to watch. Six more months to go and we won't see final results of 2021 until February/March, 2022.

From a reader today:

I assume this is fairly common and I've simply missed other examples, but it's my experience that there is generally just one well along a section line but today I noted that Hess has permits for three wells along the same section line. When I get caught up I will take a closer look, but for now: 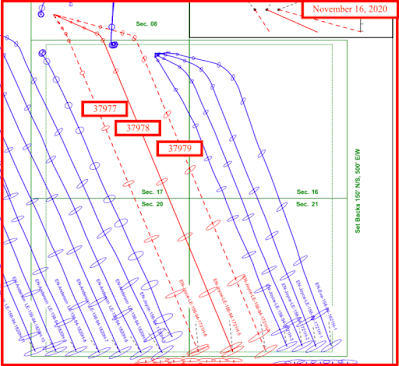 When the going gets tough, the tough get going. Hess, CLR, BR.

It’s been a challenging few years — some would say decades — for producers in northern Alaska. Crude oil production in the remote, frigid region peaked at just over 2 MMb/d in 1988 and has been falling ever since, dropping to about 450 Mb/d in 2020 and the first few months of 2021. It’s not that Alaska is running out of oil; far from it. Instead, the state’s energy industry has been battered by competition from shale producers in the Lower 48, thwarted by federal policies, and, more recently, ESG-related concerns and the Biden administration’s efforts to put the kibosh on new federal leases. Despite it all, the few producers still active in Alaska hold out hope for a revival. Today, we discuss the many hurdles that northern Alaska producers face.

As we said in our 2016 blog series about Alaska, the 49th state was seen as the next big thing for U.S. crude oil production in the 1970s –– and that promise soon became reality. With the completion of the 800-mile Trans-Alaska Pipeline System (TAPS) from Prudhoe Bay to Valdez, AK, in 1977, Alaska North Slope production took off, and by 1988, the state not only accounted for one-quarter of total U.S. crude oil output (blue layer in Figure 1), it briefly knocked Texas off its perch as the #1 oil-producing state. Alaskan oil didn’t give the U.S. “energy independence” -– a rallying cry in the Ford, Carter and Reagan years –– but it sure helped. The physical characteristics of the North Slope’s medium sour crude, with a 31.5 API gravity and about 1% sulfur, were (and are) a plus. West Coast refineries were configured to run it, and the crude is marketable in Asia too. Still, Alaska’s production has experienced a long, slow decline that continued in 2020, when it averaged 448 Mb/d, only 4% of the U.S. total and the lowest level since TAPS came online 44 years ago, according to the Energy Information Administration (EIA). 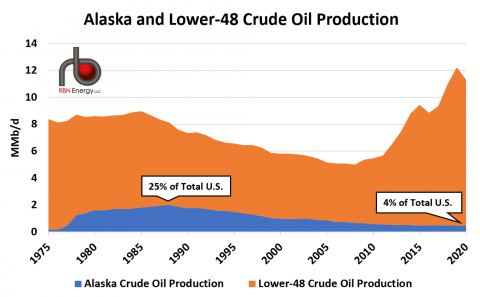