The deal is expected to close in early October, and it's the largest acquisition the master limited partnership has made in its four-year history. Prior to this deal, the MLP’s largest was a $1.3 billion drop-down announced last October.

Cheaper to buy than to build?


Poland is facing a coal shortage before the heating season, which will test the government's long-term strategy of domestic coal dependency for power generation.

Polish coal producers may have gone too far in their efforts to redress production oversupply in 2012-16. They have reduced output capacity to a point where the government is concerned that production will not be able to satisfy domestic coal demand in the coming months.

Polish thermal and coking coal output in January-July fell by 5pc on the year to 38mn t, data from national statistics office GUS show. Falling supplies pushed stocks of unsold thermal coal below 1.5mn t in June last year, which was the lowest level since 2011. Producer stockpiles have declined, despite them mainly comprising low-calorie supply, which is usually blended with higher-quality coal.

This is important enough to be posted more than once or twice. Expect to see this data posted at least a few more times over the next few months.

For now, no editing: simply re-posting data points that came in from a reader commenting on an earlier post.

Californians pay dearly for their environmental activism.
My comments:

Update On Preferred Route For Trucks Around Northeast Side Of Williston -- September 22, 2017

This is simply an update; nothing in stone (or, better said, nothing in asphalt or cement) yet.

City and county officials have signed off on a preferred route that will divert heavy truck traffic from downtown Williston.

The votes allow the state Department of Transportation to continue an environmental study on the area that will determine where exactly the road will go.

The proposed 9-mile truck reliever route will connect U.S. Highway 2 and North Dakota Highway 1804 northeast of the city of Williston.

Actually in my mind, it makes more sense to say, the 9-mile route that will connect ND Highway 1804 east of Williston with US Highway 2 northeast of Williston, swinging north around Spring Lake Park, if that make sense.

This is the map that The Williston Herald posted to show the proposed routes and the preferred route (the thick black line). 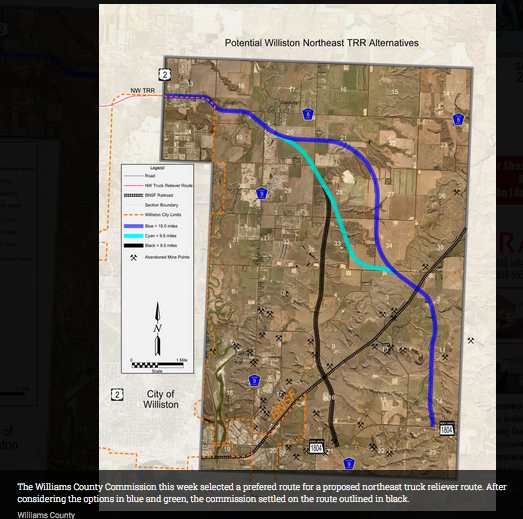 I had a little trouble sorting out exactly where that thick black line ran, and tried to duplicate an "idealized" representation on a non-satellite Google map. This is my graphic and it may be very, very wrong. As noted, I had a bit of trouble sorting out the City of Williston map. 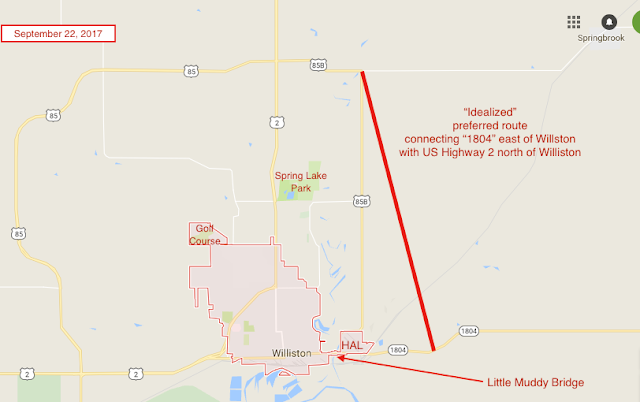 September 24, 2017: Irina Slav over at oilprice agrees that OPEC's hands are tied.


Original Post
Over at Reuters via Twitter: OPEC says it is winning the battle to curb the oil glut (which, by the way, was a self-inflicted wound).


Output cuts by OPEC and other oil producers are clearing a supply glut that has weighed on crude prices for three years, ministers said at a meeting on Friday to review the pact that expires in March 2018.

The Organization of the Petroleum Exporting Countries, Russia and several other producers have cut production by about 1.8 million barrels per day (bpd) since January.

The group is considering extending the deal beyond its March expiry, although two sources said Friday's gathering was unlikely to make a specific recommendation on an extension.

So, is OPEC winning that battle? Not if you look at US crude oil supply data for the past three weeks.

EIA data shows that US crude oil inventories have increased significantly for each of the last three weeks. The time to re-balance, once down to 27 weeks is now back up to 46 weeks. This factoid has never been reported on CNBC to the best of my knowledge.

Source for the following data.

Data for the past two years reveals that the current number of days of gasoline supply has hit a recent record (30.8 days) and rarely has it gotten above 31 days and never 32 days. So at 30.8 days, at the upper end of the range: 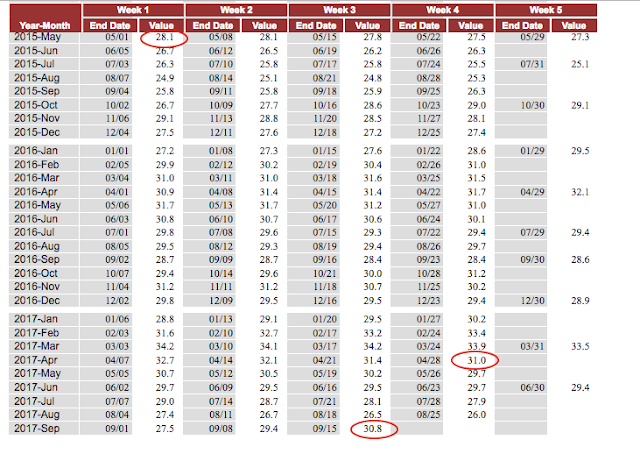 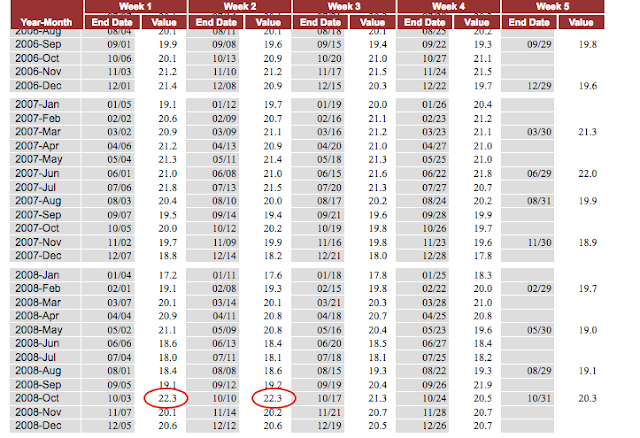 It may not sound like much, the difference between 30 days and 20 days but in weeks, the former rounds to about four (4) weeks and the latter rounds to three (3) weeks. A ten-day difference starts to approach two weeks, which is a very significant length of time for those studying "US logistics" for any product.

In general, starting about 30 years ago, it was determined that a two-week supply chain for almost any product in the US was "just about right." Prior to that time, it was felt that a longer period was needed to ensure adequate "product on the shelf." Today, storing stuff longer than two weeks at the retail point-of-sale is not economically sound.

Are Higher California Margins Worth The Hassle For Refiners? -- RBN Energy -- September 22, 2017

Californians pay dearly for their environmental activism.
This is important enough to be posted more than once or twice. Expect to see this data posted at least a few more times over the next few months.


RBN Energy: Are higher California margins worth the hassle for refiners? Bottom line:


Caught in a stifling regulatory environment and with the state chipping away at their market share in favor of electric cars and renewables, California’s refiners have to weigh the rewards of higher margins today against a questionable future tomorrow.

During years like 2015 when the Torrance refinery was offline, higher margins benefited those refineries left standing. And similar price spikes are bound to recur whenever unexpected outages bring down one or more plants in the future.

But such boosts in margin are limited and random in nature and arguably don’t compensate for an environment in which plant upgrades and expansions face a minefield of regulatory constraints. Unfortunately, the situation is unlikely to improve as electricity and renewables grab a bigger bite of the transport fuel market.


The planned ramp-up in pipeline supplies agreed in contracts signed in 2013 comes amid a pledge by producers to cut output to tighten global markets and illustrates the nip-and-tuck contest between the world's top oil exporters, Russia and Saudi Arabia, for dominance in the biggest crude importer, China.

Russia's top oil producer Rosneft said it is set to supply under government agreement 30 million tonnes of ESPO Blend crude to PetroChina in 2018, or 600,000 barrels per day (bpd), an increase of 50 percent from this year, after completion of the second East Siberia Pacific Ocean (ESPO) pipeline, which has a main spur to Chinese border town Mohe.

"Rosneft has enough resources to supply under all its existing contracts, including the planned increase of supplies to China by 10 million tones next year," Rosneft said in a statement emailed to Reuters on Thursday.

Top state oil firm PetroChina has designated three refineries in northeast China as the main receivers of Russian oil, with one of them undergoing an $880 million upgrade.

California Blue, Roy Orbison
Posted by Bruce Oksol at 8:52 AM No comments: