I mentioned the OXY warrants earlier.

Come due in seven years for $22. Can exercise them any time between day of issue and 2027. By exercising your warrant, you can buy a common share of OXY for $22.

Currently trading under ticker symbol "OXY-WT" on NYSE for under $5.00.

SeekingAlpha articles frequently disappear behind a paywall, but as of tonight, this piece on OXY is still accessible.

Today's graphic, link here (this site is also linked at the sidebar at the right): 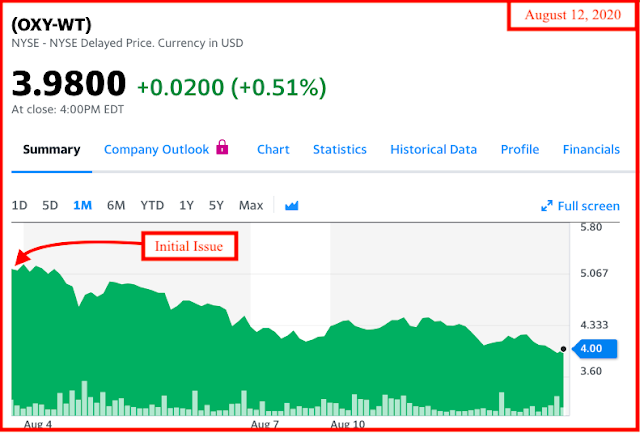 CalPERS has been much in the news lately with the sudden exit of its director, a Chinese sympathizer, from August 10, 2020: Meng's mysterious exit.

California Public Employees Retirement System (CalPERS) disclosed Wednesday that it more than doubled its shares stakes in Gilead Sciences Inc. and Zoom Video Communications Inc., both of which have been beneficiaries of the COVID-19 pandemic, while it rebalanced its holdings of technology-behemoths Apple Inc. AAPL, and Microsoft Corp. by trimming its stakes during the second quarter.

Among other companies with COVID-19 vaccine candidates, the stake in Moderna Inc. increased to 599,997 shares from 449,100 shares and the Inovio Pharmaceuticals Inc. holding nearly doubled to 322,441 shares from 176,365 shares.

I don't know if folks are following how really good these Bakken wells are doing. I don't follow the Permian, but based on the EIA dashboards my hunch is that mano a mano, the Bakken wells are beating every other onshore well out there. Look at the two DUCs reported as completed by MRO today: 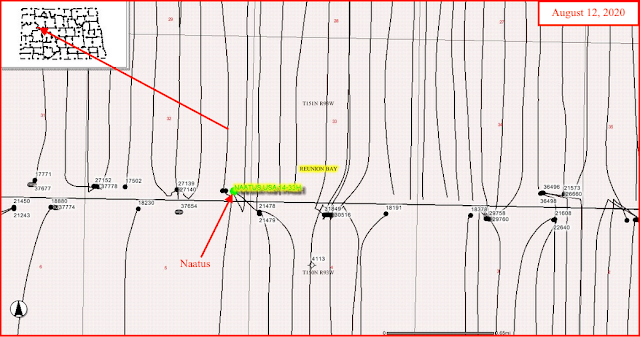 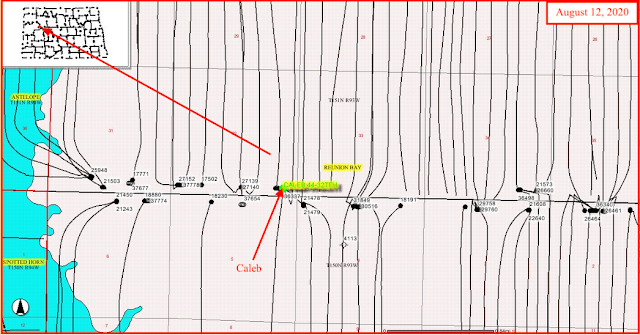 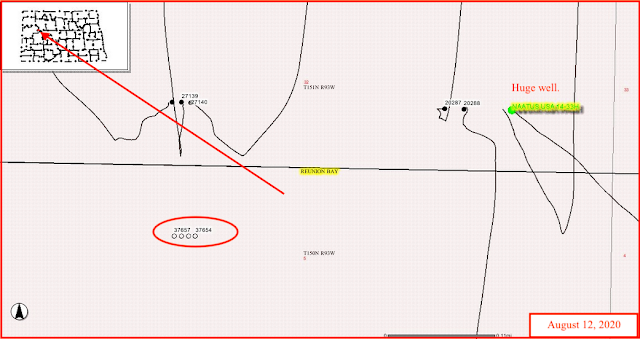 Even without considering how "huge" the Naatus was, there is a lot of work yet to be done in the Bakken in general and in this area specifically.

Wells inside the circle: 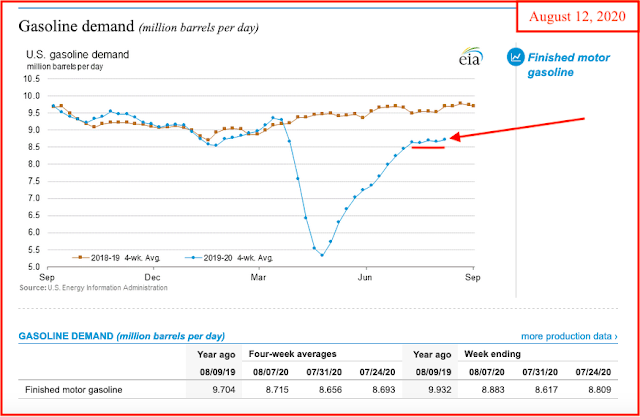 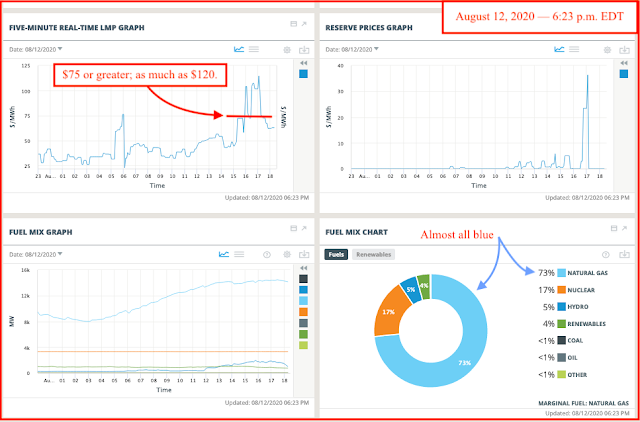 Big story: with regard to the market yesterday / today, the market was up by a huge amount going into the last trading hour when it collapsed.

Today it came back stronger than ever, and now in the last hour of trading it looks like it will hold. So, what happened? Yesterday the market was on a tear until Mitch McConnell, near the market close, said "stimulus" talks were at a stalemate. Today, it appears no one cares about Mitch McConnell's statement. Instead, it was Tesla, announcing a 5 - 1 split. And then this: amazing how much time talking heads spend telling us that splits make no difference. They don't understand human behavior. By the way, if that is a correct reading, it suggests that the market likes the federal government spending money and/or sending large amounts of money back to its citizens. If so, the market should love Biden/Harris.

Stimulus talks: SecTreasury Mnuchin invited Schumer/Pelosi to meet with him. The latter said, "no." Hmmm......that speaks volumes. Let's see if that "stimulus stalemate" statement at 3:15 p.m. EDT, 44 minutes before the market closes, will cause the same market collapse it caused yesterday.

[Rumor: Senator Schumer wants a pony for every American; Congresswoman Pelosi wants an ice cream freezer for each American. Trump just wants two chickens in every pot and funding for his bust on Mount Rushmore.]

MarketWatch op-ed, linked from The WSJ: as Big Ten and Pac-12 cancel their football seasons because of Covid-19, college sports programs are facing a financial apocalypse.

The Wizard of Oz strawmen: see this post over at PowerLine. I disagree.

I can't speak for college students in general, but based on surveys reported over on sports-talk radio, the college football players wanted to play football this fall. It was the university lawyers that said, "no."

America's students are not cowardly (as PowerLine said); their leaders are. And we've seen this over and over and over.

Egg shortage: remember that egg shortage early in the pandemic.

I did not understand it. I tried to explain it, as did readers. There may have been a relative shortage that lasted a few weeks, but it was quickly "fixed." One company, apparently, "fixed" it better than others. The NY attorney general is going after Hillandale Farms for price gouging during the "egg shortage." Google for link.

Market: we'll know in a couple of hours whether the market sets any new records. It appears we would have had a significantly higher Dow close today except for Boeing. It accounts for most of the lag on the Dow.

We now have two interesting situations.

In the first case, posted some time ago, FracFocus suggesting no sand was used in fracking these two wells (which I highly doubt):

Say what you want, these are incredible wells.

When looking at these numbers I am reminded of Oasis' decision to focus on the Permian rather than the Bakken, using the Bakken to provide necessary cash flow for Bakken operations. The decision was made when the Permian was all the range, acquisition costs were incredibly high, and shortly before Covid-19 and Saudi's decision to flood the world with oil for the second time in just a few years

These are the wells coming off the confidential list today.

Email ThisBlogThis!Share to TwitterShare to FacebookShare to Pinterest
Labels: Fracking_Water

About the only thing I found surprising was that gasoline imports were at a 53-week high, like we don't already have enough gasoline sloshing around.

Oh, and that reported 300,000 bpd decrease in production; i think it should have been an increase...hope they aren't overreacting to the mistake they made in May...