March 2, 2017: the two PricewaterhouseCooper individuals who have handed out the envelopes for the past several years will no longer have that gig. Announced yesterday or thereabouts. Had there not been a snafu for the best-picture announcement, imagine the possible speech. Conspiracy theorists might be right on this one.

From a first-person account of what happened at the Oscars, best movie, February 26, 2017:

Within moments of Dunaway announcing La La Land as the Best Picture winner, it was clear something was awry.

“Oh my god, it’s Moonlight!” a stage manager said aloud, and into a headset, while starting to pace. “Oh my god! Oh my god!” As the seconds passed and the La La Land producers, Oscars aloft, were well into their acceptance speeches, the low-level confusion backstage turned into jaw-dropping disbelief.

(While both Brian Cullinan and Martha Ruiz, representatives from PricewaterhouseCooper, the accounting firm responsible for tallying the Oscar votes and delivering each envelope to the respective presenters, were backstage throughout the show, I did not witness the envelope hand-off.)

Does anyone else see the problem here?

Let's run through this.

He handed the opened card to Faye who read the winner as La La Land -- looking at YouTube videos of this debacle, there was no delay, no hesitation, no questioning -- Faye read the card and then ...

.... according to the first person account above, at least half a dozen folks -- none of them PricewaterhouseCooper employees, but "someone from production crew" ("hands on head in shock" -- "they read the wrong envelope") and "the low-level confusion backstage turned into jaw-dropping disbelief." ["low-level confusion" -- obviously when there is "confusion backstage -- it's more than just a single person]

NOTE: it was not the PricewaterhouseCooper folks standing backstage that came out on-stage to correct things.

So, how any many folks actually do know the results? It sounds like practically everyone involved in production knows the results.

Maybe I'm misreading this, but it seems, from the first-person account, that as soon as Faye read the "best picture goes to...." everyone on the production crew knew she read the wrong card. Considering that La La Land practically won every award but the last award, it would seem that everyone -- if they did not already know the results -- would have had no second thoughts about Faye's words.

This stinks to high heaven. On several levels.

Note: when you get down to the DUCs reported as completed, down below, quick, what's the first thing you notice? Yes, all with incredible IPs. That's been my experience, also. It seems DUCs have higher IPs as a rule than the norm.

Posted by Bruce Oksol at 7:18 PM No comments:

Some years ago there were a number of posts on the blog about MRO re-fracks. Then, I sort of lost interest.

Press release here. Must have been a good report; shares up over 2% after-hours. Right around $100/share. Summary at the press release:
At $50 oil: EOG wins; Saudi Arabia loses.

From The Wall Street Journal, over the weekend, a review of Lauren Elkin's Flaneuse.

And a nod to one of my favorite authors and one of her best (if not her best) books, Mrs Dalloway:


Ms Elkin points that "I love walking in London" is the first sentence spoken by Clarissa Dalloway, Woolf's eponymous heroine whose very name is a dawdle.

I think I've mentioned more than once, that I've read Mrs Dalloway three times, and have typed the entire book out in blank verse. Along the way I discovered some interesting things about Mrs Dalloway. The novel is a prose poem. It took me about six months, a couple hours each evening. I also typed out one of Virginia Woolf's other books also, The Waves.

Today's post from Rusty Braziel (RBN Energy) is a must-read. The article will be archived.

Nothing was said about re-entry and re-fracking. Or about taking wells off-line for two months every now and then.

One of the major commercial uses of salt: to preserve herring, second only to salt cod, in the  European Lenten diet (see earlier chapter).

Herring is a Clupeidae, a member of the same family of small, forked-tailed oily fish with a single dorsal fin known as sardines. Anchovies are of a different family but of the same Clupeiforme order as sardines and herring.

Greeks called it alexiium, from the word als or hals, as in Hallstatt, meaning "salt."

A peculiarity of English language: most fish swim in schools; herring swim in shoals -- a word of the same meaning derived from the same Anglo-Saxon root.

Herring can be hard to find due to their peculiarities of feeding behavior.

Holland: learned to pickle herring using brine, fresh with no drying at all -- eliminates the risk of its fat turning rancid from exposure to the air.

Cured herring had an even lower standing than salted cod.

Zelle: Hollanders; burning peat that was impregnated with seawater.

Surstromming: Bay of Bothnia, between Sweden and Finland.

Russians: a Baltic salaka and an Atlantic sel'd.

Like garum (see earlier chapter), stromming is fermented, not rotten.

The Hanseatic story. Hanseatics known as Easterlings, because they came from the east. Easterlings is the origin of sterling -- of "assured value."

The oversupply of herring, and then the American fisheries, helped end the Hanseatic cartel.
Posted by Bruce Oksol at 10:51 AM No comments:

Email ThisBlogThis!Share to TwitterShare to FacebookShare to Pinterest
Labels: RigEffectiveness


In 2015, the number decreased to 1541. It does show an improvement in production per well. Operators started to target gassier geology, as they found it drove more resource up and out of the well bore. More importantly, well design continues to adapt. These wells produced 13K more barrels of oil and 38K Mcf of natural gas.

The improved production continues. Some believe well results are declining because all the best areas (they believe) are drilled out. This doesn't seem to be the case as improvements to design continue to outperform as well costs decrease.

The author is a senior paleontologist at the Natural History Museum in London. He is the author of several natural history books, some of which have won major prizes or been on short lists for major awards.

This is a fun book to read. He uses the subject of trilobites to discuss many other topics. It's a great book for summer reading.
Posted by Bruce Oksol at 9:12 AM No comments:

This  is really quite remarkable. One of the top business stories that broke yesterday and continues to have legs today is the story that Wendy's will install self-ordering kiosks at 1,000 locations. Over at the sidebar on the right, I have something called "the next big thing." At that link, you have to look for it, you have to scroll down quite a bit to get to this:

The link, by the way, takes you to a WSJ op-ed by Trump's first pick for labor secretary, Big Bob's Andy Pudzer. Amazing. Just one more reason why I love to blog.

I don't know about you, but when I go to McDonald's I order the same thing, every time (occasional exceptions). I can imagine the day when I walk up to a kiosk; the face-recognition technology recognizes me, and automatically brings up my usual order and asks if I want any changes. It may even throw in a few "offers" for a better deal.

By the way, I spoke with a software engineer over the weekend: it turns out facial recognition is going to get better and better with a) artificial intelligence; and, b) quantum computing (which by the way, is a component of AI).
Posted by Bruce Oksol at 9:04 AM No comments:

Later, 1:55 p.m. Central Time: Matt has his fingers on the pulse of the American electorate. His page has not been refreshed since this morning. Americans are still pre-occupied with the debacle over the Oscars last night. Meanwhile, Trump has had his televised reality show, and the Dow is on to its 12th consecutive record-setting day.

Last night's Oscars: so "yesterday." It is quite amazing how fast things are moving. Over at The Drudge Report it's still all about the flub at the Oscars and the incredibly shrinking ratings. But in the real world, it's all back to Trump. He is hosting the nation's governors and the market goes from -40 to almost flat. Will it go green? Whatever. I digress. It is amazing how fast Trump can change the conversation. Whenever Obama came on, folks changed the channel. Now folks are looking for Trump twitters and/or speeches.

This is truly bizarre:


While typing this, I was listening/watching to Trump's speech to the governors. This guy never quits working. His reality show is every morning. While watching -- over the course of the last 10 minutes or so -- the market went a -40 points to up over 10 points now. Really, really quite remarkable.

Trump: in the last two administrations, the US has spent $6 trillion fighting "wars" in the Mideast.

Stu Varney notes that the Sunday New York Times business section had not one story on the Trump rally:
Wendy's kiosks: previously reported -- this is the "sleeper" story of the decade. Think about this: in a few years we have gone from not even hearing about the technology to driverless cars on the road. But relatively nothing about kiosks at fast food restaurants. Compared to driverless cars, how difficult can self-ordering kiosks be? Everybody is looking at the $15 minimum wage as driving this. Wendy's said kiosks will pay for themselves in less then two years -- that's that challenge. Hiring workers / turnover of workers is pretty "steady-eddy" -- no real change from quarter to quarter so investors are not surprised. But putting kiosks in has a huge up-front cost that can spook investors. But what if companies are allowed to write-off that entire investment in the year in which they are bought, rather than depreciating over years or decades. That could be driving Wendy's decision.


In addition, self-ordering kiosks has increased opportunities for data mining. Folks may enter additional information; perhaps take a short survey while / after ordering. Perhaps loyalty rewards. Perhaps Wendys could go cashless. Or CBE (cash by exception). Apple stores are 99% cashless, I assume. One can pay with cash, but there are no visible cash registers. 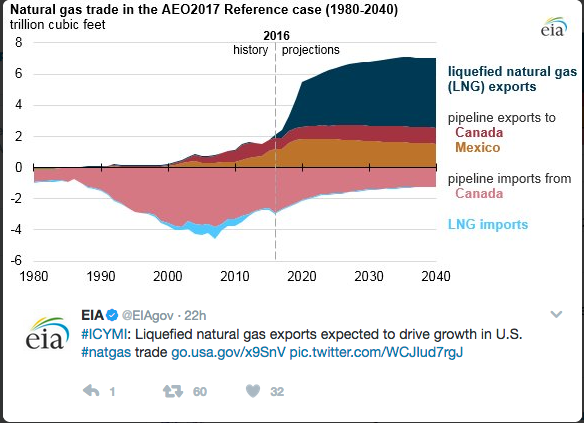 That's a wrap: twelfth (12th) consecutive day of record-setting closes; breaks 30-year record. I believe one more day and it's an all-time record.

Trump speech to the governors: during the speech the market went from a -40 to a positive 10 points. Now about 5 points into the green.

Opening: after eleven consecutive days of record-setting Dow, the market crashes at the opening -- down 12 points. -- Alt-left headline.

WTI: up 43 cents, and now at $54.43. The tea leaves suggest we could see pretty significant move on oil.

Stone Energy incurs wider-than-expected losses in 4Q16.
Posted by Bruce Oksol at 7:48 AM No comments:

EOG; reports after the market closes today.
Posted by Bruce Oksol at 7:46 AM No comments: