Change of operator: approximately 485 wells were transferred from Equinor to Grayson Mill.

This is so cool!

From that linked site, the largest craft brewery:

This morning, when I went to Target to buy orange juice for breakfast, I saw a Yuengling promotion at the store. I did a double-take. I had not recalled ever seeing Yuengling at Target, or anywhere else in this part of Texas. At least as far as I could recall. Having said that, I've never really paid attention. Maybe it's been available in Texas before and I had just not noticed.

Then this, tonight over at social media, link here. 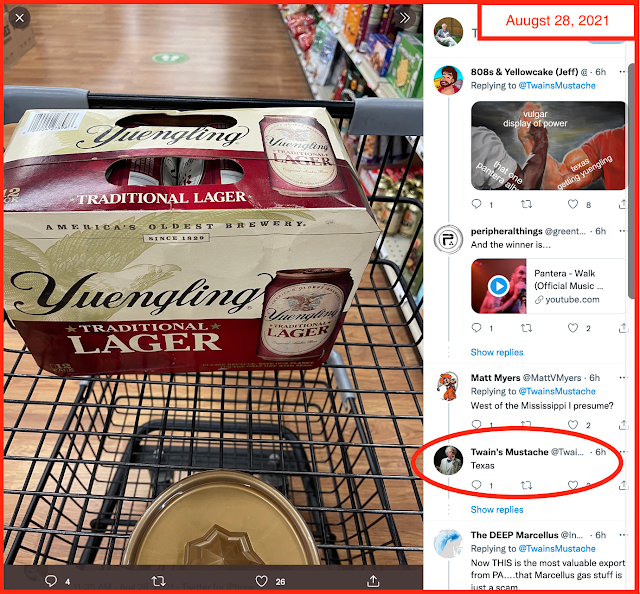 I was curious. Let's google this. And there it is: Yuengling announces, August 23, 2021, just six days ago, that their craft beer will be officially available in Texas as of that date, August 23, 2021.

My favorite beer if I find it in a bottle: Bitburg Pils.

Time to try a lager. Yuengling.

Blogging Will Be Delayed A Bit -- Relaxing On A Beautiful Saturday Morning -- August 28, 2021

RMDs: we'll get back to this story later today -- it's chock full of inanity. The premise of the article: retirees are taking too little out of their retirement funds, leaving large amounts of money behind when they die. [Update: see this link.]

North Dakota, another top ten (FWIW): North Dakota is now in the top-10 list for renewable energy creation. Link here.  Top ten? How about #2 in electricity generated by wind and solar sources?

North Dakota’s electricity consumption primarily comes from Coal and Natural Gas, but over the past decade, many wind farms have begun to popup throughout the state.

Tioga, one of the top oil producing areas of the state, has become a hub for creating wind energy through two facilities: The Lindahl and Aurora farms.

“North Dakota itself is a powerhouse in energy and the types of sources we create. Renewables help us be more diverse in that energy, which in turns keeps the cost at a certain level where it’s more affordable across the board for everyone,” said John Cribbs Assistant Site Supervisor for the Lindahl Wind Farm

According to a report by The American Clean Power Association, North Dakota was 2nd in the nation in electricity generated by wind and solar sources in 2010 at about 10%.