Late this afternoon / early evening I suggested May and I go to her favorite sushi restaurant, Kula, fairly new in the area.

Sunday evening, 7:00 p.m., the mall is as busy as I've seen any mall. There is "no" parking left, but with a bit of driving around, waiting, we find a spot. We put our name on the list, a 50-minute wait. We visit the Japanese, Korean, Taiwanese stores in the mall. It's Little Tokyo. Just what we experienced in parts of Torrance, CA.

Then it dawned on us: this is all new and it's all because Toyota that has just moved in.
Posted by Bruce Oksol at 8:51 PM No comments:


Madison wells are not fracked; no stimulation. In addition, these have been short laterals, so far. Vertical depth at 4,000 feet is about half that of a Bakken well. Madison wells typically don't have the "dreaded" Bakken decline rate. Shallow, short laterals, no fracking, and steady production over many years; previously Madison wells were simply vertical wells; now horizontal wells.

Efficient U.S. wells in the Permian Basin and elsewhere, though, will benefit most and the extra supply they pump will limit any price increases.

New methods of shale drilling have turned the Permian into one of Earth's richest oil regions. The area's Wolfcamp shale formation alone may hold 20 billion barrels of black gold, making it the second-largest field in the world behind the Ghawar region in Saudi Arabia, the U.S. Geological Survey estimated in November.


Running an existing well now costs as little as $35 a barrel, having fallen significantly over the past couple of years. Saudi Arabia's absolute operating costs are lower, but its economy needs an oil price closer to $80 a barrel to hit what the IMF calls its "fiscal breakeven."

Later, 10:50 a.m. Central Time:  I must have posted the original post about 30 minutes ago -- suggesting that OPEC's likely decision to extend production cuts (wink, wink) is not going to solve any of Saudi Arabia's problems -- and now I see that Julian Lee over at Bloomberg is saying the same thing:


Enough of this drip-feed of trying to slowly whittle away oil inventories. If OPEC wants to bring down excess stockpiles, it needs to find its courage when it meets on Thursday, dust off its old playbook and make a big cut as it did in the past.

"We’re going to do what it takes to bring the industry back to a healthy situation,” Saudi Arabia's Energy Minister, Khali Al-Falih, said in a Bloomberg Television interview in Washington back in March. Nice words, but it's going to take a lot more than words to get oil inventories, or prices, back to where OPEC wants to see them.


In 1998 -- yes, I've been doing this long enough to remember all that time ago -- OPEC slashed output by more than 4.5 million barrels a day to try to rebalance the market after the Asian financial crisis. Three years later it had to do even more as recession hit demand again, and it cut its collective output target by 5 million barrels a day. In 2008 it was forced to make another huge sacrifice, with members deciding to chop daily supply by around 4.7 million barrels.

The OPEC cuts agreed last November begin to look rather puny in comparison -- the effective reduction in April was around 1 million barrels a day, against a plan of more than 1.7 million. In that last big deal Saudi Arabia agreed to cut its own production by almost twice as much as the 486,000 barrels a day it pledged this time, taking it down to little more than 8 million barrels a day.

Many, many great graphs and data at the link. Archived.


Original Post
Put it in the bank! From Twitter, Saudi Arabia says continuing the existing cuts is more than adequate to reduce oil inventories to 5yr avg by end of Q1 2018. So, that will give us something to watch. Unfortunately the five-year average was greatly distorted by the surge in production and storage in 2015 - 2016. Getting back to the five-year average is a nice sound-bite but it's still oil priced way too low for Saudi Arabia to afford $350 billion in new arms, plus all their other expenses. Just a thought. And then what, after March, 2018, is it every Arab for himself as each country moves back to maximum production?

School project: middle school students are making a movie. I believe that is our oldest -- 13 y/o -- granddaughter facing away from the camera with her hand on the shoulder of the male actor.  Another middle-school student is behind the movie camera.

Meanwhile, her younger sister, age 10, the middle granddaughter, appears to be the director, sitting on the chair following the "white board" and script.

I assume our youngest granddaughter, almost 3 years old, took the photograph from behind the screen door. 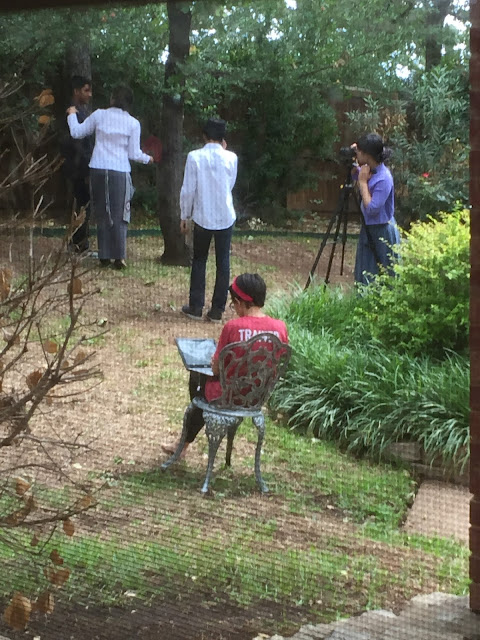