I have to leave -- I will be off the net for awhile, but I couldn't be in a better mood. Three stories I might come back to ... or not:

Smithsonian Channel will air a documentary on the Bakken boom, which they say began in 2010! LOL.


I think this is going to be the most interesting two years (2015 - 2017) in the Bakken since the boom began in Montana in 2000 and in North Dakota in 2007. You said it, or someone else said it, the roughnecks are the most flexible workers to be found. If they banked some of their money, they can take a lower-paying job now and wait for the boom again. In addition, some of those roughnecks will learn to build their own business, their own boss.

I couldn't possibly be in a better mood, but I was out all day, and I just got back and am overwhelmed as usual with all the stuff I want to post, but don't know where to start.

Maybe some free association, from wiki:


In free association, psychoanalytic patients are invited to relate whatever comes into their minds during the analytic session, and not to censor their thoughts. This technique is intended to help the patient learn more about what he or she thinks and feels, in an atmosphere of non-judgmental curiosity and acceptance. Psychoanalysis assumes that people are often conflicted between their need to learn about themselves, and their (conscious or unconscious) fears of and defenses against change and self-exposure. The method of free association has no linear or preplanned agenda, but works by intuitive leaps and linkages which may lead to new personal insights and meanings: 'the logic of association is a form of unconscious thinking.'

I love politics, so I will start there. It looks like Chicago's Rahm Emanuel is in the race of his life. But I think he pulls it out in a squeaker.

The Hillary Clinton e-mail story: the story dies in less than a month. Americans have very, very short attention spans. Hillary has two bigger problems: a) age; and, b) age. Her third problem is fatigue. Ours, not hers. We are tired of her.

If folks are tired of Hillary Clinton, they are really, really tired of all that talk about anthropomorphic global warming. Every day there's a new theory. Today, it's Milankovitch cycles. I always thought Milankovitch was a Dallas Maverick (basketball) but that's Dirk Nowitzki. Milutin Milankovitch played for the Celtics. Just joking. He was a Serbian Solar System climatologist. The most famous Serbian basketball player was probably Vlade Divac who played his entire NBA career -- 16 seasons -- wtih the LA Lakers. He played for Phil Jackson who won three NBA championships while Vlade Divac was on the team (if I recall correctly). I do know that Phil Jackson grew up in Williston and graduated from Williston High School. He was a senior about the time I was beginning my wrestling career in high school -- my athletic history was somewhat less eventful than Mr Jackson's. But I digress.

So, Rahm is in the fight of his life; the Clinton e-mail story will be forgotten in a month; and Vlade Divac had nothing to do with the Milankovitch cycles.

And with that, enough for now. Maybe more later.


These 25 US cities are hoping for global warming -- if not global warming, at least regional warming - say, maybe 5 to 10 degrees warmer for each of these cities. 24/7Wall Street - Yahoo says these are the 25 "coldest" cities in the US, in reverse order:


Sawfish, From Below
Posted by Bruce Oksol at 10:14 PM No comments:


Wells coming off the confidential list today have been posted; see sidebar at the right. 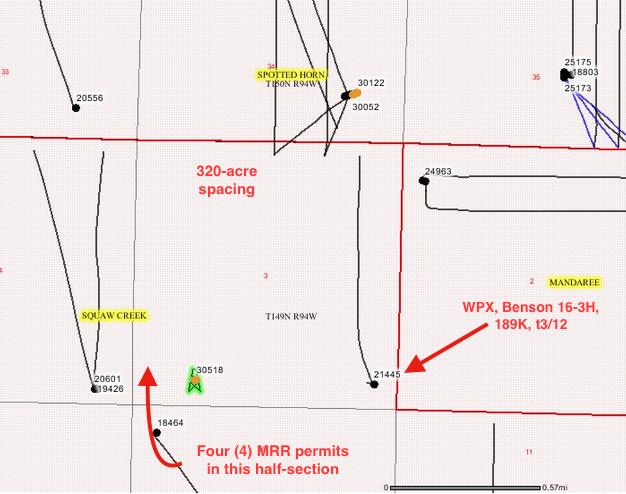 Initial production numbers for the 26 Oasis wells coming off the confidential list are posted at this link. Wide range of results.


The proposed 400 Mb/d Shell Pipeline Company Westward Ho pipeline from St. James, LA to Nederland, TX, was first touted in 2011 and initially expected to be in service by Q3 2015 but is now delayed at least until the end of 2017. The project is designed to replace the Shell Ho-Ho pipeline that used to ship crude from Louisiana to refineries on the Texas Gulf Coast until it was reversed in 2013. Westward Ho has struggled to attract shipper commitments to bring additional crude into the saturated Texas Gulf Coast market. Today we review the project’s rationale.

The original proposal was made in the context of SPLC’s plans to reverse their existing pipeline from Houma to Houston – known as Ho-Ho - in 2013. The Ho-Ho reversal came in response to rapidly escalating volumes of light domestic crude oil from shale showing up in Houston – initially from the Texas Eagle Ford and Permian Basins and then as more pipeline capacity opened up - from North Dakota and the Rockies via Cushing, OK. We have documented these flows of shale crude into the Gulf Coast region in numerous blogs. Because Houston area refineries are primarily configured to process heavier crude rather than light domestic shale it made sense to reverse Ho-Ho to provide a route to refineries in Louisiana that are configured to process lighter crudes. Given the demand for the Ho-Ho route and the fact that it was easier to reverse an existing pipeline than to build a new one, SPCL chose to reverse Ho-Ho first but at the same time announced they would build Westward Ho as a replacement pipeline for shippers moving crude from Louisiana to Houston.

SPLC are clearly anxious to get Westward Ho built – the terms of the second open season were understood to be more favorable to shippers because they offered shorter 3-5 year commitments rather than the 10, 15 or 20 years offered first time around. Reducing the scope of the project to just St. James to Nederland (leaving out Houston) reduces the capital cost and therefore the amount of shipper commitments required to get the pipeline off the drawing board. At the end of the day the success of the project in attracting shipper commitments comes down to whether GOM producers can compete in Port Arthur/Beaumont (and perhaps Houston if/when Westward Ho is extended) against the tide of light shale and heavy Canadian crude coming through all those other new pipelines. Barring any radical changes like a reversal of the regulations restricting crude exports, Texas Gulf Coast refiners will decide the answer to that question. If they invest to reconfigure their refineries to process lighter crude they will no longer need offshore domestic sour barrels. If they continue to buy sour barrels then producers and shippers will be more likely to make the necessary commitment to get Westward Ho built.