This is just one of a gazillion examples I could show why I am inappropriately exuberant about the Bakken.

Imagine you are the heir to a homesteader who farmed 160 acres, in section 8-147-96, retained the minerals and passed them on to his grandchildren (one of whom was you) and great-grandchildren. The families are multi-millionaires many times over (or will be).

First, look at the activity several years ago at this link, the screenshots from 2015.

Now, look at what has happened since then, screenshots of the same area six years later. 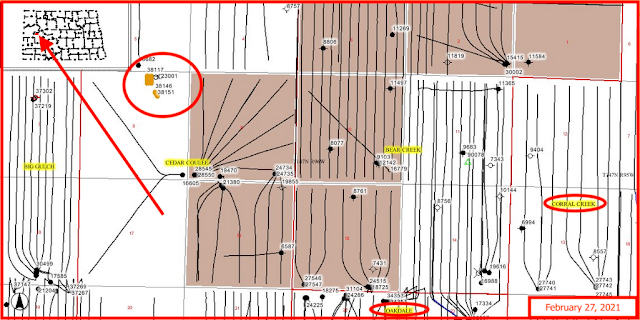 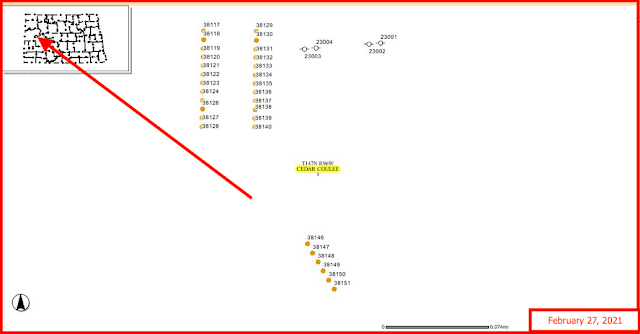 These wells are on the pad to the west, running north to south:

These wells are on the pad to the east, running north to south:

These wells are on the pad running diagonally, northwest to southeast:

As I said in a recent note: I really don't care one way or the other how CLR the company does for its investors. Don't take that out of context. This is not an investment site. But just imagine one individual who started out in life driving water trucks for wells in Oklahoma and is now able to authorize his folks to apply for permits for siting 30 wells in one section and then watching them be drilled.

Note: regardless of the density of wells in the Bakken, it is generally understood that in the core Bakken, it is expected that new wells have a EUR of at least one million bbls of crude oil.

This page won't be updated. This well is tracked here. Is something going on? This well was taken off line almost two years ago, back in 4/19. Now, almost two years later, the well was brought back on line for 19 days, 12/20, producing 1,167 bbls of oil:

There's a lot of activity about four miles south of the LK-Pohribak wells. See the graphics at that link posted December 4, 2020 (link). At that time, about three months ago, there was only one rig in section 32-147-96. Now there are four rigs:

These wells run west to east on one pad:

These wells run north to south on one pad:

These wells run north to south on one pad: 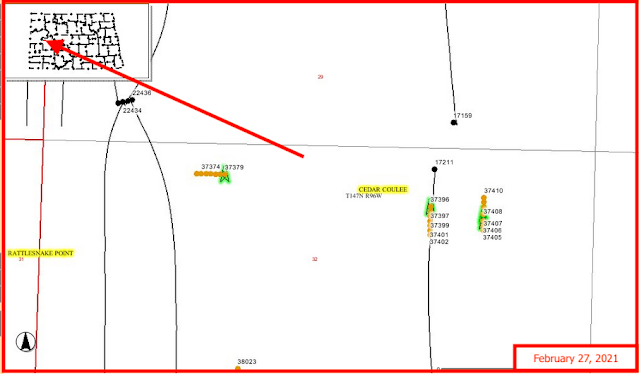 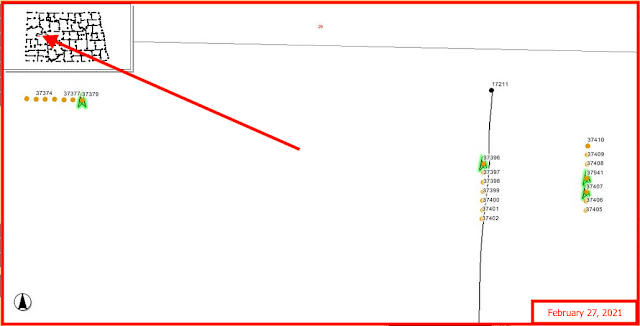 February 28, 2021: the most interesting question no one is asking -- why would the Biden administration release this "classified" document. Second most important question: where might this lead? Other questions:

I've said this more than once on the blog, my hunch: the old man's patience is running thin with his son. Worse, the heir, the Saudi Crown Prince, Prince Mohammed bin Salman age 35), has built up a large number of enemies within the extended royal family. He's not yet the king; his dad is still alive at age 85, about the same age as our president.

And, today there are reports of Iran-backed rebels firing missiles over Riyadh. 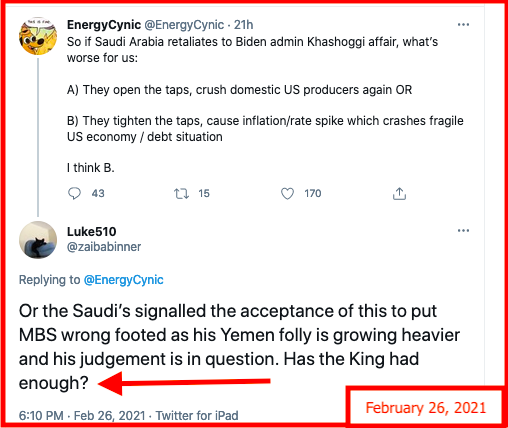 Seldom discussed: Biden is "old school." He is a devout Catholic. Not much love lost between him and Saudi Arabia.

Saudi King snubbed Obama back in 2015. Payback is hell.

Official figures and data have shown that Saudi Arabia’s debt [is now] 21 times larger in just six years, as the kingdom has lost more than half a trillion dollars since King Salman came to power at the beginning of 2015.

We finally got it framed!

Sophia drew this fox as part of an assignment earlier in the year. We finally got it framed.

Sophia is wearing "blue-light blocking" glasses that she wears when at the computer. 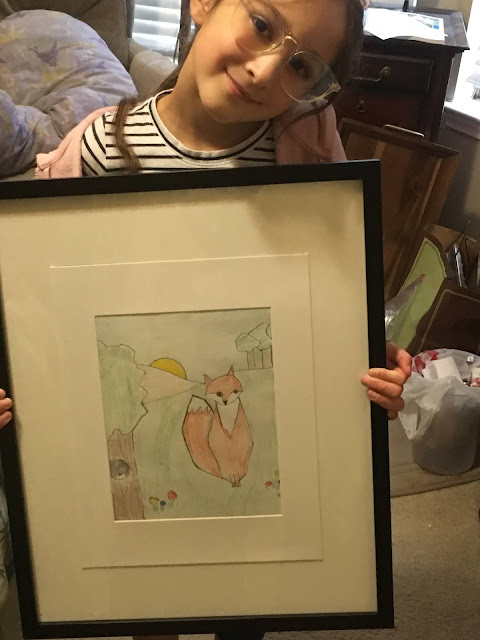 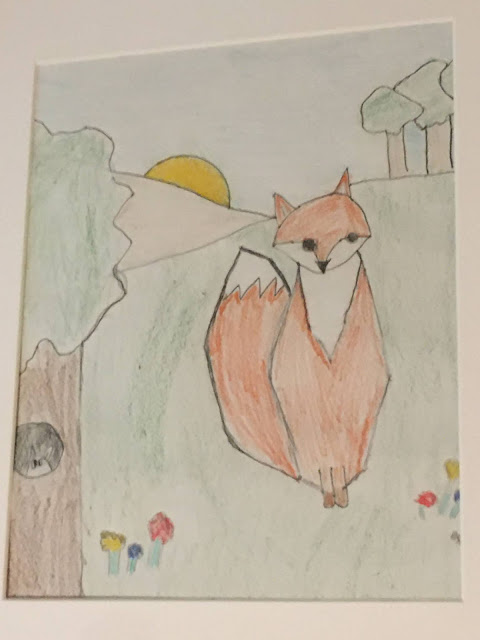 American Household Income Surging! What Two Sectors Will Be The First To Benefit? -- February 27, 2021 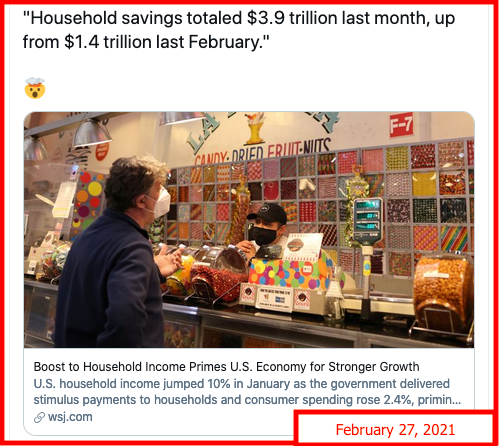 From the linked article;

Pandemic aid to households is pouring money into the U.S. economy, priming it for rapid growth this year.

The increase was the second largest on record, eclipsed only by last April’s gain, when the federal government sent an initial round of pandemic-relief payments.

Household income has risen 13% since February 2020, the month before the pandemic shut down large segments of the economy.

January’s increase in household income was almost entirely due to federal pandemic-relief aid included in a $900 billion stimulus program signed into law in late December. That package included one-time cash payments of $600 and a special weekly unemployment benefit of $300 that the government started sending to households.

And remember: the next stimulus checks will be arriving in less than a month.

And then this, from ZeroHedge:

Of course, in a month when household personal incomes exploded thanks to the $900BN stimulus checks, coupled with the collapse in Covid cases and hospitalizations, the resultant burst of economic strength is hardly a surprise.

On a trivial note:

A majority of Goldman's sector analysts report that business activity in their industry is at or above normal levels.

Most also indicated that last week's winter storm in the South and Midwest did not significantly affect their industry.

I opined before the Texas Freeze was even over that it would be forgotten in two weeks and everything would be back to "Covid-normal" in two months. GS seems to agree.

Chart of the day from Mark Perry, with commentary.

What am I missing?

This was the Bloomberg headline:

This was buried near the end of the story:

"Falling short." Holy mackerel. That's incredible. The oracle of Omaha, the Venerable Bede of investing, the superman of stock picking, the ... well, you get the point ... his fund gained 2% in a year when the market surged, when the S&P 500 apparently gained 16%.

North Dakota Crude Oil Production Is Up Almost 40% Compared To May, 2020 Despite Active Rigs And Frack Spreads Trending Toward Zero -- February 27, 2021 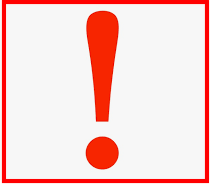 Based on comments I get and based on comments over at twitter and based on articles by the likes of Art Berman, and then looking at the most recent dashboards, it still seems to me that folks don't understand shale, and they don't understand how unconventional plays are different from conventional plays, how the Bakken is different from Saudi Arabia.

It's almost as if those noted above don't take time to really study the data or the graphics like the one below. 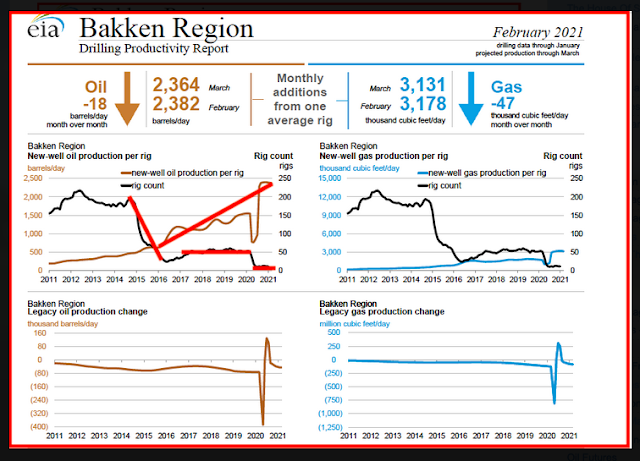 And yet crude oil production in North Dakota has not dropped off a cliff;

By the way, when was the last time you saw an article talking about "all" the flaring in the Bakken. I thought so.

Imagine production data from Saudi Arabia and/or Russia if their rig counts had trended toward zero for the past two years. Need I say more.

By the way, I've set a goal this year to learn how to spell "Ovintiv" without looking it up.

Much more could be written but I will leave it at that, for now.

From the NDIC, at the link, "historical monthly oil production statistics":

According to Rolling Stone's Christopher R. Weingarten, the "producers used the pitch correction software not as a way to fix mistakes in Cher's iconic voice, but as an aesthetic tool."

When she beat out Britney Spears for Billboard's #1 single of 1999 with "Believe," it was hard to realize that was the same Cher who once knocked out The Beatles off the top of the charts with her first hit song back in 1965. 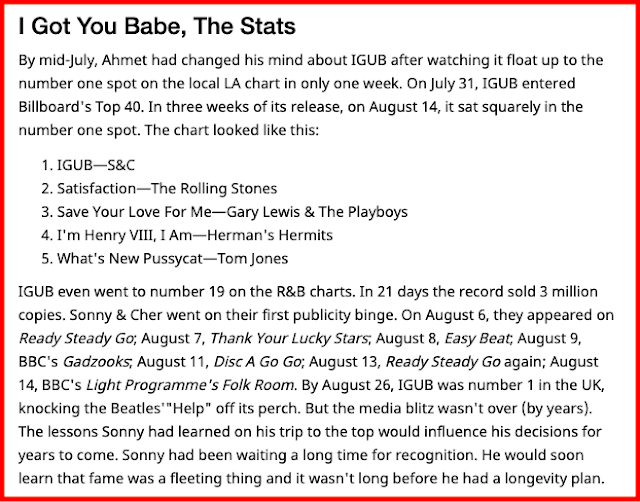