A reader told me that the NDIC uses the pricing at Flint Hills Resources for the oil prices reported at the monthly Director's Cut. At the link, one has a choice of clicking on "EDQ" or "Bulletins." Click on "Bulletins" and then click on "Download." The result should show up as a PDF on your desktop.

A screenshot of part of the current bulletin looks like this: 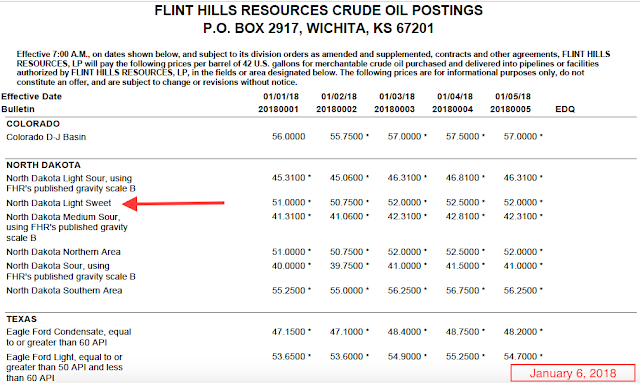 The forecasts of real consumer spending growth and real private fixed-investment growth decreased from 3.2 percent and 8.9 percent, respectively, to 3.0 percent and 7.6 percent, respectively, after this morning's employment report from the U.S. Bureau of Labor Statistics and this morning's Non-Manufacturing ISM Report On Business from the Institute for Supply Management. The model's estimate of the dynamic factor for December—normalized to have mean 0 and standard deviation 1 and used to forecast the yet-to-be released monthly GDP source data—fell from 1.44 to 0.37 after the reports.

EV sales: complete report for December, 2017, has been posted.

Dream a Little Dream of Me, Mama Cass Eliot
Posted by Bruce Oksol at 3:14 PM No comments:

An update from The Grand Forks Herald:

State officials are reviewing the license application for the Yellowstone Disposal landfill. It's a project backed by a North Dakota-based company, which plans to build on 2,600 acres of land 4.5 miles southeast of Sidney.

Newton's ranch sits near the Oaks Disposal Landfill, which has been the main destination for this type of waste in the Bakken region since 2013. It took 253,000 tons of waste from 2013 to 2015.

Most of it comes in the form of filter socks, which most often arrive in truckloads from North Dakota.

The Environmental Protection Agency deemed exposure to radioactivity from TENORM waste as low-risk for people who live and work nearby. For comparison to the 50 pCi/g limit set by states, a banana has a natural radioactivity of 3.5 pCi/g, according to the North Dakota Department of Health. Clay-based cat litter is rated at 15 pCi/g.

Email ThisBlogThis!Share to TwitterShare to FacebookShare to Pinterest
Labels: RadioactiveSocks

Nationally, the big story this past week has been the road to New England.

Regionally, the biggest story of the week -- taxable sales in the Bakken surge (see below).

Operations
A WPX Hidatsa well may have established a new Bakken production record
A middle Bakken well re-entered, targeting the Three Forks
Despite the Arctic blast, active rigs in North Dakota claw their way back to 54
Whiting's McNamara wells have been fracked
CLR starts to frack the rest of its Rath Federal wells

Miscellaneous
The Williston Herald releases its top-10-story-list for 2017
The winner of the 2017 Geico Rock Award announced
Hettinger, ND, recorded the coldest temperature on earth this past week; but cold is relative
Posted by Bruce Oksol at 12:56 PM No comments: 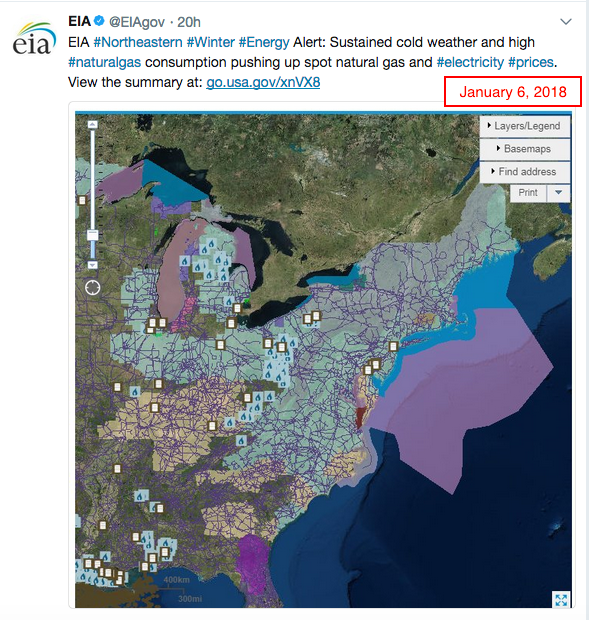 The other day a reader updated the spot price of "Y grade" products:

Today's spot pricing at Belvieu, expressed in barrels ...
There have been many, many posts on "Y grade" products. Some of them, based on "relevance":
Also, from the FAQ page:

58. Oil is generally "measured" in barrels (bbls). Is the volume of natural gas liquid (NGL) ("wet" natural gas) also expressed in bbls? No, NGLs are generally expressed in gallons, according to a comment sent in by a chemical engineer.  Incidentally, some think the "additional" "b" comes from "blue barrels." From RBN Energy:

There’s one more aspect of NGL markets that must have been designed to confuse outsiders, because it certainly does.  NGL quantities are quoted in barrels.  NGL prices are quoted in gallons.  Really.  So I’ll sell you 10,000 barrels of non-TET normal butane for $1.36 per gallon.  It never occurs to NGL people to convert either the quantity to gallons or the price to a per barrel number.  They think of everything multiplied by or divided by 42.  Go figure.  And BTW, propane retail people do think in gallons - but that’s another story.


NDSU wins, 17 - 13. A real nail-biter. Great game. NDSU sets record -- wins 6 championships in 7 years; never done before. Two disappointments with the coverage: the half-time report was nothing more than an ESPN commercial -- all about the Georgia-Alabama championship game Monday; and ESPN cut quickly to a college basketball game after the end of the NDSU-JMU game; home town folks won't have televised coverage of NDSU getting the trophy.

This is from a post several years ago, April 5, 2014. I happened across it this morning while looking for something else. It's hard to believe how fast "open season" became the norm in a free market society for buying something so important as health care insurance. Under ObamaCare Americans were told they could only buy health insurance during a three-month window every year. Can you imagine if that applied to everything we did in society?


ObamaCare: The End of Year-Round Enrollment

I did not know this. I thought "open season" was the rule, not the exception. It appears that prior to ObamaCare one could buy health insurance year-round. If one already had health insurance, one would renew during "open season," generally the last three months of the calendar year.


Here's more fallout from the health care law: Until now, customers could walk into an insurance office or go online to buy standard health care coverage any time of year. Not anymore.

Many people who didn't sign up during the government's open enrollment period that ended Monday will soon find it difficult or impossible to get insured this year, even if they go directly to a private company and money is no object. For some it's already too late.

With limited exceptions, insurers are refusing to sell to individuals after the enrollment period for HealthCare.gov and the state marketplaces. They will lock out the young and healthy as well as the sick or injured. Those who want to switch plans also are affected. The next wide-open chance to enroll comes in November for coverage in 2015.

A couple of comments: first, who cares?

Second, we are finally starting to see some "truth-in-advertising" stories about ObamaCare in the mainstream media. This is not good news for incumbents running for re-election who voted for ObamaCare.

Third, this whole article if full of malarkey.

The "open season" is another red herring. The deadline has been extended so many times, we had a six-month open season, and even this article admits that folks who have started the process can continue, thus extending the "open season" to about seven or eight months. Reminder for low-information crowd: a typical calendar year has twelve months.
But this is the real story: I can guarantee you that anyone who wants to buy insurance at any time will find some insurer who will be accommodating. In fact, I wouldn't be surprised if some insurers will simply start the process now (April, 2014) with hopes that one's enrollment process will be complete by October, in time to receive the pre-filled voter registration form along with the insurance card.
I recently had a minor leak around the bottom of the toilet bowl which necessitated repair and replacement of the bathroom flooring. What a hoot if I had logged on to the Obama Plumbing and Voter Registration Website only to find out that one could only get one's plumbing needs resolved during "open season," i.e. three months at the end of the year.

What a great country. Obama certainly had all the right ideas for this country.
Posted by Bruce Oksol at 8:09 AM No comments: