January 8, 2018: another reader weighs in on this announcement, see comments:


Ethane right now is left with the methane stream except at Tioga Hess Plant, where the Vantage pipeline to Alberta takes it too a cracker. That line has a 68,000 barrels per day.

The new lines won't be able to accommodate ethane, so ethane cracking could be another industry courtesy of the Bakken.

Ethane doesn't have the value for long distances so it needs to be consumed locally.


OneOK built a 12" NGL line from MT to SE Wyoming about 5 years ago.

If you look at a map of the new line it looks like it is parallel with the original. I wonder if it is in the same right of way?

Pipeline builders would probably like to keep their intentions as quiet as possible until the line is built. As I recall the original line ran into some opposition in the area of the Bear Lodge Mountains around Devils Tower due to the line passing through an area with gyp rock.

With this much increased capacity to transport NGL out of the WB the future looks bright for future production growth it appears to me. New or expanded gas plants in the works also? Or maybe updated Central Tank Battery production facilities with pad drilling being the new source of NGL?

I've seen a few CTB sites the last couple times I was in Dunn County and they contain several what appears to be ASME code vessels with many pipes connected to each vessel. Do these mini processing plants strip volatile/liquids from the oil and the gas? Which end up in NGL pipelines? (http://www.oneok.com/~/media/ONEOK/Newsroom/ReleaseDocs/ElkCreekPipeline_Map.ashx) link to the map of the new line. [By the way, to open an "ashx document" use Adobe.]


Sending unfractionated NGLs - aka 'Y grade' out of the Bakken could have a significant positive impact on operators' financials.

Essentially, removing the methane from the gas stream (possibly 70% +/- of the total volume) enables the higher value liquids to be transported and processed via pipeline.
I think liquids are presently transported by rail.

Transportation and processing fees would come out of these figures, but, still, it adds up in addition to the methane price realized at the Northern Border transfer point.

Every now and then a developer announces a small wind farm and the local media is all over it, talking about the "new" wind farm. At the other end of the continuum the oil and gas sector seems to announce a new billion-dollar project every week. And there's no fanfare. If it weren't for the company's press release, we would probably never hear about it.

If a Martian were to read all the energy stories in the mainstream media, the alien would get the feeling that fossil fuel industry is dead, replaced by wind and solar. Hardly. 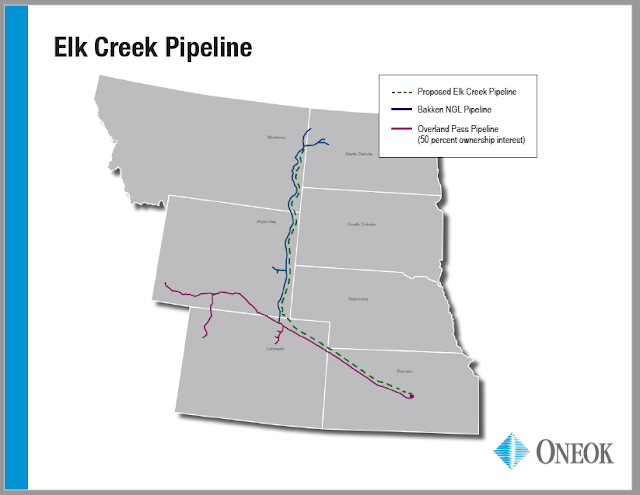