Enhanced Completions In The Bakken Could Cap Upside -- Filloon -- September 26, 2017

Over at SeekingAlpha, summary:


Enhanced completions are in the early stages of development. Since results continue to improve, there is not reason to believe this will not continue in the immediate future. This continues to pressure oil prices and the U.S. Oil ETF. It is obvious that operators can produce a profit at much lower oil price than just two years ago. If improvements continue, we could see lower for longer with respect to WTI.

Other data points:
The graphic: the arrows point to the wells that interest me -- 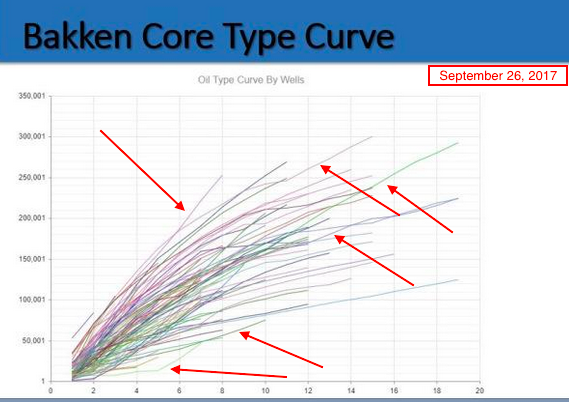 Global warming hits Arizona: Arizona Snowbowl is the first to start snowmaking in the country.


Arizona Snowbowl fired up the snow guns this weekend, marking the earliest artificial snowfall in the country! Not to mention this being the earliest start to the snowy season in Arizona.

This historical contest is usually won by Colorado ski parks Loveland Ski Area and Arapahoe Basin. This is the first instance where Snowbowl has beaten them both.

Montana update: I will be driving from Portland, OR, to Flathead Lake, during the second week of October. Long-range forecasts: no snow; low of 39 degrees at night; high of 70 degrees during the day over Lookout Pass, Idaho.

All lives matter: the Smithsonian in Washington, DC, finally found room to honor Clarence Thomas in its year-old African American history museum. The museum did not have room for the Supreme Court justice at its opening. Reminds me of the Hall of Fame. In this case Clarence Thomas did not make it in his first year of eligibility but made the Hall of Fame in the second year of his eligibility. Speaking of which, where is his nemesis, Ms Anita Hill, these days? Wiki says she is a university professor at Brandeis University.
Posted by Bruce Oksol at 9:25 AM No comments:


If Texas’s Permian Basin is Exhibit A for the U.S. oil boom that refuses to die, then the Eagle Ford, a smaller shale patch some 400 miles to the east, represents all those places that have been left behind.

It’s not that the oil rigs totally disappeared after crude prices abruptly collapsed in 2014. But it’s awful quiet. The wells here aren’t the kind of gushers that make it attractive to keep pumping at $50 a barrel.

As the shale drillers moved on to richer fields, the South Texas landscape became pockmarked with abandoned structures. This nimbleness—the ability to just pack up and leave at a moment’s notice—may give U.S. oil companies a competitive advantage against their more rigid state-run OPEC rivals, but there is a human cost to it all.

Overall:
US production growth will keep surplus inventories high
Non-OPEC production outlook flat outside the US
OPEC production is higher than it anticipated when it announced its cut
Adequate future world oil supply requires higher prices
My comment: fundamentals suggest that prices for crude oil will remain flat but the question is whether speculators will push the price of oil toward $60 over the next 12 months.
Posted by Bruce Oksol at 6:59 AM No comments: