Daimler Trucks splits off tomorrow. I've been looking forward to this day for a long, long time. This is really, really going to be interesting. I have some photos of the EV truck factory in the Daimler factory in Portland, OR, with the proto-type on which the mechanics are training. I'm not posting the photos. I don't know who took the photos but I don't want anyone to get fired. Something tells me those photos were not authorized. I would expect to see / hear an interview on CNBC tomorrow on this new EV truck company, but CNBC may not think it's that big a deal. I won't be watching CNBC. I haven't watched CNBC since the "flash crash" the day after Thanksgiving. It's unlikely I will start watching again until after January 1, 2022.  One of a gazillion links here.

XLNX / AMD merger: shorts are building. Link here. The other day I suggested what these two equities could settle at prior to the merger. Again, we're assuming the merger closes before the end of the year.

Starbucks: the employees at one of three Starbucks restaurants in Buffalo, NY, were the first to ever unionize a Starbucks restaurant. Link here. Starbucks, the company, may want to "get ahead" of this sooner than later. Later: this is such a crazy story. This is not a grass roots effort. This is being pushed by "Big Labor" and "Big Labor" lost. There are nineteen Starbuck restaurants in Buffalo; one of the nineteen, unionized. How many employees at that one Starbucks? Nineteen, I believe. Fact-check needed. And of the nineteen employees, not all voted to unionize. Wait until these employees start paying union dues. LOL.

CPI data for November, 2021, will be released Friday morning, 8:30 a.m. ET, December 10, 2021. The forecast is for 6%+. Anything below 6.7% will be "what we expected" but if it's 7% or greater it will be quite a story. I think I saw a headline today that Brandon is already preparing Americans to expect the worst, telling us the November data is already "old" and does not reflect the significant drop in prices we've already seen in December. For example, except today when I saw gasoline prices go up again in my neighborhood, gasoline had dropped two cents / gallon in the last couple of weeks.

Supply chain shortage: likewise, with cargo ships anchoring beyond the horizon while waiting for berthing at the Los Angeles / Long Beach ports, the congestion at the ports has been greatly reduced. So, we're making headway.

More on the economy here.

It is impossible to articulate how beautiful the weather is right now. I had to pick up something at Target tonight; pitch black after 8:00 p.m. CT; and it was nice enough to wear my short-sleeve Hawaiian shirt while riding my bike.

Disclaimer: in a long post like this, there will be content and typographical errors. That is true of every post on this blog. If any information reported is important to you, go to the source.

Disclaimer: this is not an investment site. I follow the market to put the Bakken in perspective and to better follow the fossil fuel vs renewable energy discussion.

I guess this might be one of the bigger investing stories today. I posted this earlier, not paying attention to the market:

Now, at the close, surfing through the networks to get to Corner Gas I saw the crawler for the market today ... Lucid caught my attention, so I checked the EV stocks:

In an e-mail conversation with a reader about road taxes and truck weight, I suggested that there were reports earlier that EV cargo loads would have to be lower to account for heavier EV tractors due to the batteries.

Apparently that is being address. See this article. Most interesting is this:

Interestingly, the company reports a little known fact that electric trucks in the US and Europe have both been approved for slightly higher total load. From Tesla:

With both the U.S. and E.U. having approved higher weight allowances for electric heavy-duty trucks, we expect the payload to be at least as high as it would be for a diesel truck. In the E.U., electric semi trucks are allowed to be 2 tons (~4,400 pounds) heavier than diesel equivalents, and in the U.S. the allowance is 0.9 tons (2,000 pounds).

When fully loaded, the Tesla Semi should be able to achieve over 500 miles of range, achieved through aerodynamics and highly efficient motors. This truck will be able to reach an efficiency of over 0.5 miles per kWh.

While a 2,000-lb difference doesn’t sound like much leeway on an 80,000-lb limit, it’s going to give Tesla Semi just enough to compete with diesel trucks.

My hunch is that federal and state governments were able to get this "passed" by compromising to agreeing to a higher tax rated on that increased weight. Maybe the rate increase will be linear; to be determined. See below: after posting this note about weight, a reader who is, seriously, an authority on this, corrected me:

Later, from an expert in the trucking industry.

Each state has a road use mileage tax compiled by the truck registering with IFTA – Interstate Fuel Tax Authority.

Each state has different tax rates per mile traveled. The trucking company files quarterly reports on the miles traveled in each state. You can buy fuel in each state to pay as you go and make up the difference or receive credit from each state. Your base state does the audit to verify your mileage is correct. With electronic logs it is very easy and accurate to compute the tax.

When drivers had paper logs it was much harder. The driver would record his odometer reading while crossing each state line and compute the tax.

Tax has nothing to do with weight, it’s the same loaded or empty. Miles traveled are all that matters.

Many trucks are loaded full and the freight is light so the total gross weight is much lower than the limit. Like moving Styrofoam cups. Other  freight is very heavy per cubic foot so the trailer may be ½ empty and still be close to max weight.

Taxes have nothing to do with gross weight. Weight limits have to do with bridge load limits, brake function needed to stop the full weight unit in the distance required in the Code of Federal Regulation and other engineering limits like tires and frames.

Jobless claims: come in well below forecast -- this is quite amazing -- lowest first time claims number in five decades --

$100: by state, how far will $100 stretch when driving ICE vs EV? Link here. It should be noted that Missouri is now raising annual registration rates for EVs. For the archives.

I have to find a post where this story is and will be followed. Let's follow this story here. Now, how to tag it? NDXL-Pipeline? Or Pipeline-NDXL? Oh, there it is, it already has a name: Midwest Carbon Express.

There is no such thing as a "CO2 spill" -- well, at least not yet -- they're running out of excuses to ban pipelines . 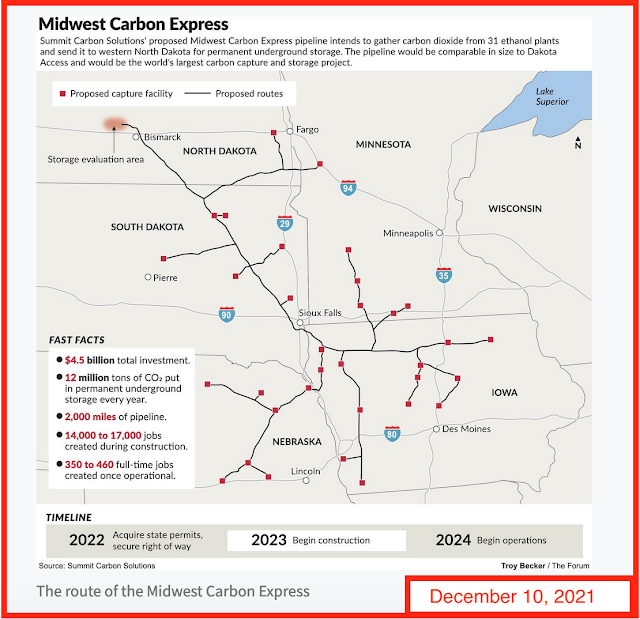 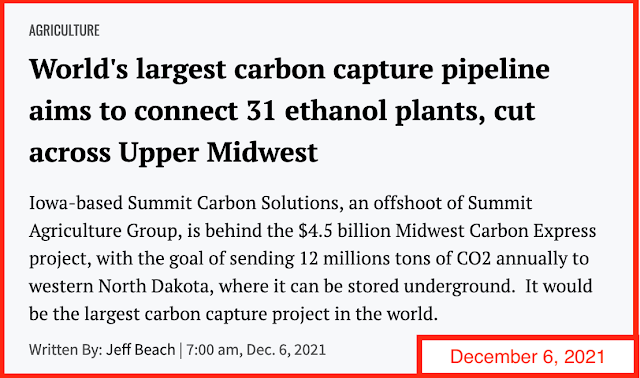 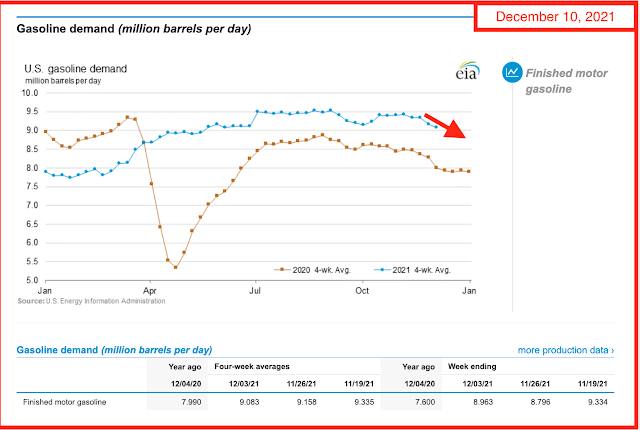 KMI: we'll come back to this later.

Devon: how it all got started. Link here.

EQT: response to Elizabeth Warren; no one will read it; Pocohontas will ignore it; the response will be lost in the ethernet. Will download as a pdf.

EU/UK energy crisis: Iceland cuts electricity to crypto miners amid power crunch. Link to Charles Kennedy. This would have been "just another" story but when I saw who wrote it, it was "must-read."

Austria: 14-day lock down even worked in neighboring countries without a lock down. Link here.

Market sentiment toward oil and gas companies, particularly producers and midstreamers, has been increasingly negative since the oil price crash in late 2014, driven by a mix of shorter-term concerns like price volatility and corporate debt and longer-term worries like the environment and an impending energy transition.

One company that has found it especially difficult to regain investor confidence is midstream giant Kinder Morgan Inc., whose late-2015 decision to slash its dividend got an ice-cold reception from shareholders and sent the company’s stock price sharply lower.

Over the past six years, KMI has been largely successful in its efforts to stabilize its balance sheet, internally fund growth, and gradually restore its dividend, but its current share price remains close to its late-2015 low and barely one-third its early-2015 high.

In today’s RBN blog, we discuss highlights from our new Spotlight report, which analyzes KMI’s current portfolio and performance and discusses in detail the company’s new strategic initiatives to restore investor confidence.

For nearly a quarter century, Kinder Morgan’s management has employed a variety of industry-leading corporate structures and strategies to advance its rapid expansion into what is now one of the largest energy infrastructure companies in North America. These include a master limited partnership (MLP), a leveraged buyout, an initial public offering, and a consolidation of all its holdings into a single C-Corp.

The result has been that the company has grown into a behemoth.

Kinder Morgan Inc. today has a market capitalization of $38 billion and an estimated 2021 EBITDA of over $8.3 billion.

KMI owns an interest in or operates approximately 83,000 miles of pipelines and 144 terminals. Its pipelines transport about 40% of U.S. natural gas along with refined petroleum products, crude oil, condensate, CO2, and other products. And the company’s terminals store and handle a wide variety of commodities, including gasoline, diesel fuel, chemicals, biodiesel, ethanol, metals, and petroleum coke. However, as we’ll get to, Kinder Morgan has also faced challenges regarding investor sentiment that it has been working hard to address.

Posted by Bruce Oksol at 6:23 AM No comments: