This is pretty cool. Back in 2011 I was putting together a list of wells that might become part of MRO's re-frack program. That was back in 2011. Once I saw the program begin to play out, I no longer added wells to the list.

Production after the original frack, an open hole frack with 543,000 lbs sand:

It will be most interesting when EOG begins a re-fracking program in the Parshall oil field.
Posted by Bruce Oksol at 8:15 PM No comments:

The Marshall Plan, adjusted for inflation, spent about $120 billion to rebuild West Germany. See this link. A huge "thank you" to Jim Cramer for alerting me to this data point.

Apple today announced it would inject $350 billion in new investment in the United States over the next five years, much/most of it in 2018, according to Jim Cramer. In addition, Tim Cook will write a check for $38 billion in a one-time tax related to the tax bill.

Cramer says that in an interview with Tim Cook, the Apple CEO said these developments were only possible because of the tax cut -- you know, the one that was not supported by one Democrat. Even the anti-Trumpers, and never-Trumpers on the GOP side of the aisle voted for this tax bill.

That helps put things into perspective.

According to Yahoo!Finance, Apple, Inc, has $75 billion in cash.

Later, a huge "thank you" to a reader for providing this link: https://www.cnbc.com/2018/01/17/cramer-apples-tim-cook-credits-most-of-350b-plan-to-repatriation.html?__source=yahoo%7Cfinance%7Cheadline%7Cheadline%7Cstory&par=yahoo&doc=104950964&yptr=yahoo.

Disclaimer: some of these data points may be incorrect; I was distracted by Sophia when posting this, but I'm sure it's easy enough to confirm these figures. The Marshall Plan figure is accurate, at least as far as I know, and so is the Apple figure of $350 billion. That's enough for me.

Arctic Blast? What Arctic Blast? Active Rigs In North Dakota Power Ahead To 58; But Look At The Phenomenal DUCs Reported As Completed -- January 17, 2018 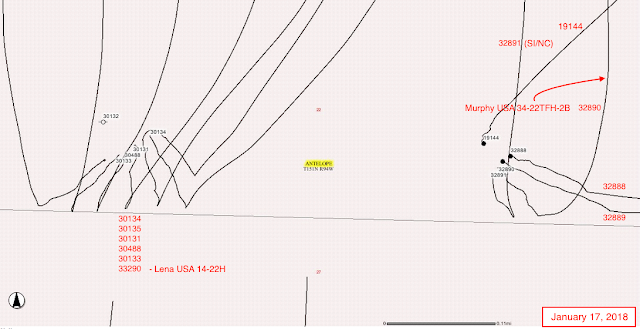 The Lundin wells are tracked here.

Disclaimer: the spreadsheet below was done by hand. In a long spreadsheet like this, there will be factual and typographical errors. I did not double-check the data except that from the Elm Field oil field. If this information is important to you, go to the source. Do not make any financial, investment, job, travel, or relationship decisions based on what you read here or think you may have read here.

Ranked by change in production (percentage basis) for the month of November (month-over-month), column 10: