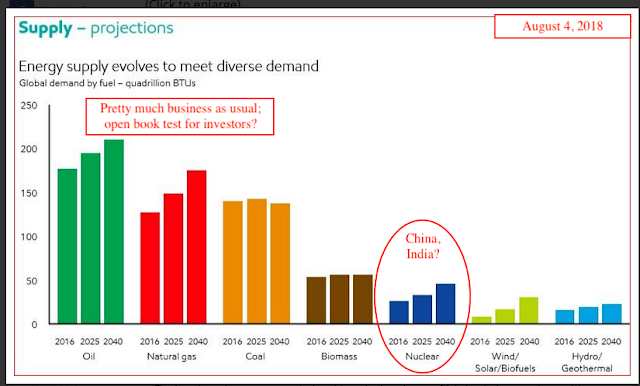 This was the week that Apple hit a market cap of $1 trillion.

Without question, the data point of the week, if not the year?

The pipeline bottlenecks in North America are really causing a problem for western Canada and west Texas (the Permian). The largest crude oil producer in Canada has had to curtail production in Alberta because of the pipeline constraints. COP has temporarily exited the Permian. EOG, at the end of the week, said it would be cutting back on efforts in the Permian. Remember: it was the former CEO of EOG who suggested the Bakken play is coming to an end, as far as excitement / growth is concerned.

It's probably not a surprise that "pipelines" are "beating estimates." Link here.

It's hard to believe, it didn't feel like it, but apparently Brent crude had its biggest monthly drop in two years.

I think there were not less than three graphics that will compete for "graphic of the year":
Operations
Bruin reports a record 30-day IP; also linked above

Pipelines
Could there be another "Bakken" pipeline to the Gulf Coast

August 6, 2018: more to follow. Apparently Berkshire Hathaway bought an additional 15 million shares of AAPL in 2Q18. We'll learn more later, but if accurate, BRK owns about 240 (previously announced) + 15 million (today's announcement) = 255 million shares. Outstanding AAPL shares, 4.83 billion. 240 million / 4,830 million = just barely 5% of the Apple corporation. At 5% and 10% -- SEC beneficial ownership rules kick in. My calculations suggest BRK is just under the threshold but if Apple continues buybacks -- which it will -- it will push BRK over the 5% threshold.

This would include "paper gains" from equity in shares of publicly traded companies -- which would have both losses and gains -- and would include Berkshire's AAPL shares.

Wow, this is so incredibly interesting. I don't anything about this; I'm way in front of my headlights but in the original post I discussed the affect the value of Berkshire's AAPL shares affected his revenues and earnings. I had no idea there was a rule change ... from the linked article:


Berkshire’s earnings are especially volatile due to an accounting rule that went into effect this year requiring companies to include unrealized investment gains or losses in their net income. Berkshire holds large stock investments, and their quarterly changes in value can have a big effect on Berkshire’s net income.

"... unrealized investment gains or losses ... " sounds like "paper profits" -- see original post below -- my thoughts and my calculations.

From the article:
But now, the "stuff" in The WSJ that fits my narrative below (wow, this is great):


Original Post
I don't have time to complete this post but I want bragging rights, so I will post this now for the date-time stamp -- and get back to it later.

From SeekingAlpha:
From MarketWatch:


Count Warren Buffett as one of the Apple Inc. investors cheering Wednesday as the tech giant’s shares jumped almost 6% a day after posting a positive earnings report and outlook.

That’s because the billionaire chairman of Berkshire Hathaway Inc. BRK.B,  likely made more than $2.6 billion in a single day as Apple shares spiked.

As of the end of March, Berkshire Hathaway held 239.6 million Apple shares AAPL. Assuming it hasn’t sold any — Berkshire has been loading up on Apple, buying 75 million shares in the first quarter alone — that’s a profit of about $8 billion in four months, and a $48 billion overall stake in Apple.

In May, Buffett — who’s worth about $84 billion himself — told CNBC that he’s a big fan of the Cupertino, Calif., tech giant.

Quick: what important data point was missing in the MarketWatch story above?

With regard to the well and the pad, see this post.

With regard to the name of the well --

The Sefolosha well and (now) pad were named for a Swiss basketball player who was picked up by the NBA's Philadelphia 76ers in 2006. He was promptly traded to the Chicago Bulls, and then in 2009, traded to the Oklahoma City Thunder. Sefolosha was selected to the All-NBA Defensive Second Team for the 2009–10 NBA season.

Next up:  Timothé Luwawu-Cabarrot. LOL.
Posted by Bruce Oksol at 1:13 AM No comments: