April 20, 2016: stating the obvious -- in prepared remarks, Russian energy minister said Decision-making within the OPEC has become more complicated and since 2008 the international oil cartel has taken no action to regulate the global oil market.


A deal to freeze oil output by OPEC and non-OPEC producers fell apart on Sunday after Saudi Arabia demanded that Iran join in despite calls on Riyadh to save the agreement and help prop up crude prices.

The development will revive oil industry fears that major producers are embarking again on a battle for market share, especially after Riyadh threatened to raise output steeply if no freeze deal were reached.

My hunch: no one cares. But good news for American drivers. In the big scheme of things, it was probably best there was not an "artificial" attempt to raise oil prices; let the market work. My hunch: Saudi is more interested in their "post-oil" plan.


Original Post
Disclaimer: this is an opinion piece. There will be more "errors" than usual. When talking about "cost" of producing oil one can get whatever numbers one chooses. In addition, I mention "taxes" in the post; I've long forgotten the tax structure for Bakken oil and Bakken oil is just of many "oils" in the 57 US states being produced.


Again, if "they" are not drilling, and they are not fracking, what are "they" doing? At least one operator has said "they" can make money on $25-oil in the Bakken.

From The Wall Street Journal today, two links on cost of producing oil: the second link was inside the story at the first link.


Oil producers that supply nearly half of the world’s output started a day of negotiations over a possible freeze with what participants described as a draft deal.

But Sunday’s meeting quickly turned to sniping and confusion after Saudi Arabia’s delegation appeared to step back from any agreement without rival Iran.

Ahead of the meeting, delegates circulated a draft accord that calls for freezing output at January levels until October 1, 2016, to gauge its effect on prices. The freeze, first suggested in February by big producers like Saudi Arabia and Russia, is intended to limit global supply and bolster prices.

It seems to be playing out pretty much as expected: sniping among the tribes. And confusion.


The draft, reviewed by The Wall Street Journal, calls for a monitoring committee comprising members of the Organization of the Petroleum Exporting Countries and other countries that would be charged with ensuring compliance among signatories.

That tone contrasted with the kingdom’s delegation here, led by longtime Saudi Oil Minister Ali al-Naimi. He landed in Doha Saturday and has declined to comment ahead of the meeting.

But people familiar with the Saudi delegation’s thinking said Riyadh was willing to sign a deal despite what they described as “political” statements from Prince Salman.

Later Sunday, Mr. Naimi’s delegation changed its tune with fellow participants and insisted on Iranian participation after all, two delegates familiar with the matter said. The switch was “surprising and contradicts what they have been saying for the last few days,” according to one Persian Gulf oil official in Doha familiar with the new stance.

I found the story somewhat, should we say, underwhelming?

It's kind of funny for Saudi to demand Iranian participation. Iran is entirely irrelevant. OPEC and Russian produce about 20 million bopd. Iran? What? 500,000 bbls. Let's say a million. 5% at most against 20 million bopd and vs total global production (1/96 = 1%). I'm surprised, using those numbers, Saudi Crown Prince Heir-To-The-Throne Most-Magnificent One, Protector Of The Kingdom And Generally All-Around Good Guy didn't demand that Lynn Helms attend. If nothing else, to talk about flaring.

[Note: a reader later reminded me that OPEC produces about 3 million bopd; I guess I was comparing apples with oranges, with Iran supplying maybe a million bopd to the export/global market.]

So, the story underwhelms. The TV crawler tomorrow morning on CNBC will show oil slumping 5% before it recovers a bit.

What was much more interesting was the link inside the link.

In that first linked WSJ article, there is a little graphic about halfway down. Click on it and you get: cost of producing a barrel of oil and gas.

The analysts break out the cost of producing oil using four categories:
Each of those costs are accompanied by a graph. Lingering over the graph with one's cursor, and more information pops up.

I tell you, folks, this is a keeper. Archive it.

Do me a favor. Take the four graphs, and remove "capital spending" from US shale and note the total cost of oil for US shale. 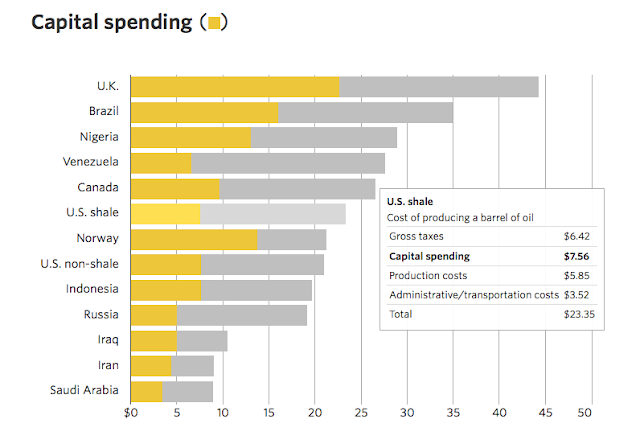 Some of the hedge funds that have recently bought stressed Bakken properties are likely running their new operation on cash flow only, without any (much?) capital spending, waiting to flip the properties.

As long as you've played along this long, note that US shale taxes are a heavier burden than production costs. But I believe, the 12% tax on Bakken oil is incentivized to 6% (in round numbers) for first year of production or something like that. At least at one time. $30 oil x 0.06 = $1.80. [I could be way wrong on this. Do no quote me on this. If this information is important to you, go to the source, or go to Doha.]

As a reminder to newbies, the "cost" for producing oil in Saudi Arabia is entirely irrelevant. What is relevant is what the kingdom "needs" to manage its budget. In general, for the past decade, it's been said that Saudi needs $100 oil. In 2015, the kingdom set their budget based on $60 oil (suggesting it never thought oil would go under $60 -- on average over the year). With all that is going on in the Mideast, Saudi needs oil to be a lot higher than $60 if they don't want to drain their cash reserves over the next couple of years.

Again, there are so many story lines with this WSJ article, but I'm going to leave it at that. 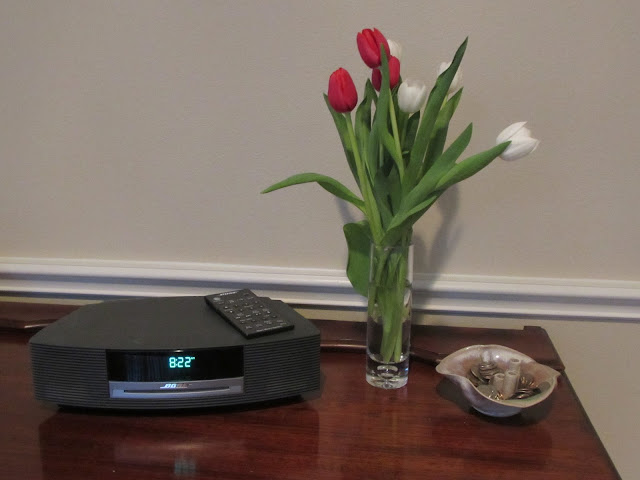 Back on April 6, 2016, I had a short blurb on The Obama Doctrine aka "we're sitting this one out." It appears the folks over at The Boston Globe finally got around to reading the article and agree with me: the Obama Doctrine has made the world more dangerous.

When you have The Boston Globe opining that Obama's foreign policy has made the world more dangerous and McKinsey and Consulting opining that Obama's only domestic "success" is a huge failure, it's hard to find much positive about how historians will eventually summarize the Obama years. I assume it will be in Section IV: Failed Presidencies.

Anyway, whatever, back to The Boston Globe op-ed today:


But Obama is better at deploring other people’s foreign policy messes than at learning from them. The lesson he takes away from the Iraq war was that the United States has no business intervening militarily in the Middle East — and that the greater the intervention, the greater the resulting fiasco. The facts haven’t borne out that conclusion. But Obama won’t be budged.

Fathomless ignorance. Their words not mine.

So much more at the link, but time to move on.


RICHARDTON -- The Red Trail Energy ethanol plant is heading into the 2016 farming season free of debt and with its sights on the future.

The nine-year-old investor-led company, which crushed corn into more than 54 million gallons of ethanol last year, informed investors at the company’s annual meeting March 17 that it had paid off its final $5.5 million in debt.

“I think it was a surprise for them,” Red Trail Energy CEO Gerald Bachmeier said. “I don’t think it was expected.”

Red Trail Energy was scheduled to be paid off over the next three years.

Meanwhile, out in Los Angeles, Sports Chalet is closing all stores and stopping all on-line sales, I guess, which is another way to say Sport Chalet has gone out of business. I think I've spent half of my life in the US out in California and I don't recall ever seeing a Sports Chalet. They must have been located in the more upscale parts of the metropolis. The Los Angeles Times is reporting:


The regional chain, which was purchased in 2014 by a Connecticut company named Vestis Retail Group, will remain open for several weeks while merchandise is cleared out, Sport Chalet said on its website.

Sport Chalet started in 1959 when German immigrants Norbert and Irene Olberz bought a tiny La Cañada Flintridge ski shop, which they built into a publicly traded retailer with more than 50 locations.

On Saturday, the struggling sporting goods chain began going-out-of-business sales at its 47 stores and closed its online sales operation.

I assume global warming and the lack of snow led to the demise of this ski shop.
Posted by Bruce Oksol at 8:43 AM No comments: