In a long note like this, there will be typographical and factual errors. The NDIC map server was a bit tough to sort out but I think I have it correct; but there could be errors. If this information is important to you go to the source.

In a long commentary, facts and opinions will be interspersed. It is often difficult to separate facts from opinions.

If something appears wrong, it probably is.

Finally, I did not proofread this page in its entirety. I consider the page to be a PAGE IN PROGRESS FOR AT LEAST A WEEK giving readers a chance to weigh in on the post.

To bring yourself up to speed regarding with the Bridger wells, check out this post first, where I track the Bridger/Bonneville wells.

There appear to be eleven (11) CLR Bridger wells. The Bridger wells are on Bridger pads as well as Bridger-Bonneville pads, all in Rattlesnake Point oil field.

The eleven (11) Bridge wells are broken down as such:

Five "H" wells, MB: middle Bakken wells. Four of the five "H" wells have been completed and are producing.

Here are the Bridger wells. It's a busy slide. I've tried to line up the "H" wells across the top; the "H1" wells in the second line; and, the "H2" wells along a third line. The "t" date is the month/year the well was tested; generally a well is tested within two months after the well is completed. FracFocus will report exactly when wells are fracked.

SI/NC (DUCs): these wells have been drilled to total depth; they were not fracked at the time they were completed. It is possible they have been fracked; if so, their production reports will soon be available. 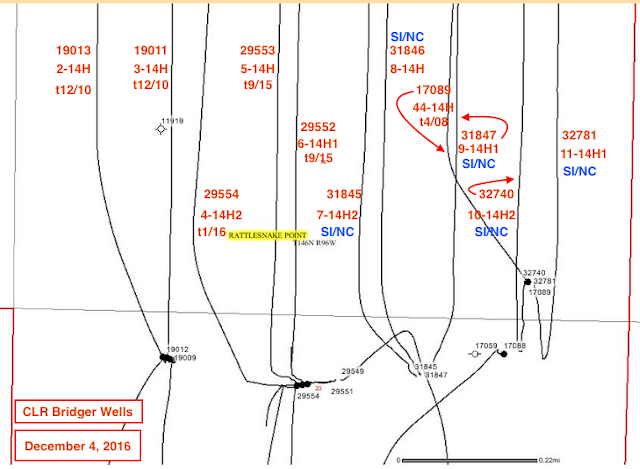 By 7/14 this well had plateaued at 350 bbls / month. Then taken off line, and production jumped to 3,000 bbls of oil per month. Some suggest this could be simply due to built up pressure while the well was taken off line but that pressure should have "exhausted" itself after a couple of months. Note that the increased production has lasted for many months. It's hard not to think that this increased prodution was due to two "neighboring wells" fracked at this time (8/15).

But, it's been talked about before the geologic relationship between TF1 and the middle Bakken.


It's hard to believe that taking a well off-line for less than a month resulted in a build-up in pressure to the extent that production went from 1300 bbls/month to 13,000 bbls/month.

With regard to the halo effect, the next data point to watch will be the production profile of #17089 when #31846 is fracked.

With regard to the halo effect, the next data point to watch will be the production profile of #29552 when #31847 is fracked.

With regard to the halo effect, the next data point to watch will be the production profile of #29554 when #31845 is fracked.

Because this was a particularly long note, I had my assistant check the numbers: 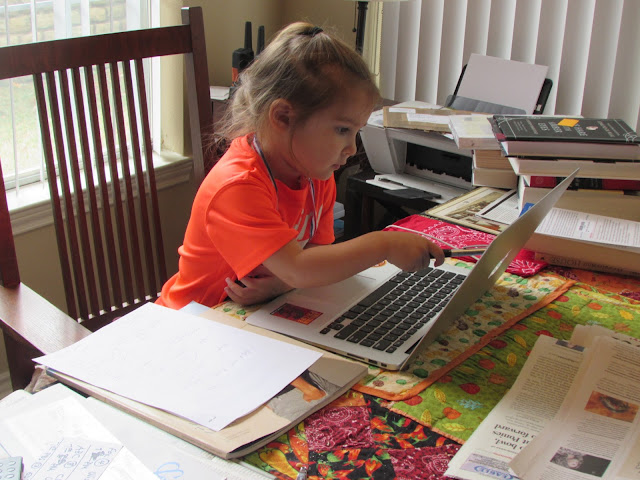 
Joe McMonigle:  On very political DAPL permit denial: Courts will overturn and approve if not done before by Trump.

When a president in his last full month of presidency shuts down a $4 billion pipeline which is 99% complete and was approved by a gazillion government agencies as the necessary and as the best route option, it puts to rest all that media anxiety about an incoming president's conflicts of interest. Something tells me I have less to worry about the incoming president's "conflicts of interests" compared to the decisions made by a fathomless ignorant incumbent. 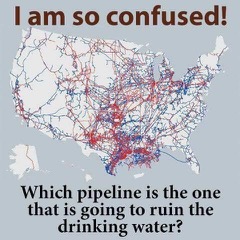 A huge "thank you" to a reader for providing the graphic.

We don't need a new law. We need a new president.
Posted by Bruce Oksol at 11:27 AM No comments: 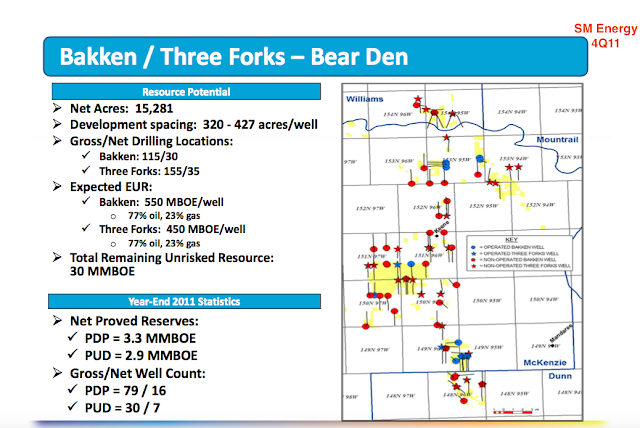 Link here. If I recall correctly, someone said there were two additional sales days in November, 2016, compared with last November, 2015. I don't know.

Link here.
Posted by Bruce Oksol at 8:50 AM No comments: