The Great Bakken Oil Rebound -- Forbes -- May 16, 2018; Meanwhile Katie Ledecky Sets Another World Record -- Time To Put Her On A Wheaties Box

Disclaimer: I'm inappropriately exuberant about the Bakken --
Much more at the linked article.

From The IndyStar: Katie sets another world record. Not only that but she "opens the Indy meet with the world record in the 1500-meet freestyle." From IndyStar:


No one told Katie Ledecky you are not supposed to set world records apart from championship meets while in the middle of heavy training.

In her first meet as a professional swimmer, she lowered her own world record in the 1,500-meter freestyle by five seconds to 15 minutes, 20.48 seconds Wednesday night at the Natatorium at IUPUI.

It was the first event of the TYR Pro Swim Series meet, which continues through Saturday.

Ledecky, a five-time Olympic gold medalist, hit her fist in the water and stuck out her tongue after touching the wall and seeing the scoreboard. The world record was the 19th set at the Natatorium, which opened in 1982.

Wow! So much more at the link.  From tweets:

Katie Ledecky's time would have made the Olympic men's 1500-meter freestyle final as recently as 1996 -- when it would have knocked eventual gold medalist Kieren Perkins out of the final.

In 2013, Katie Ledecky broke her first world record in any event in the 1500-meter freestyle. At the time, she lowered the longest-standing record in the sport by six seconds. She has since lowered it by another 16 seconds.


All Alone Am I, Brenda Lee

May 19, 2018: in the commentary below (in the original post), I mention that hedging is a two-edged sword: From Marcket Watch:


U.S. shale oil producers don’t benefit quite as much as you might expect from high crude prices, thanks to pipeline bottlenecks and price hedging.

“Many of these shale companies are spending more than they are making, or close to it,” said Matt Badiali, senior research analyst at Banyan Hill.

“These companies aren’t exposed to the higher prices because many of them hedged their oil production at $50 per barrel,” he said—well below the $62.88 he pegged as the average in the first quarter of this year.

WPX Energy Inc. for example, reported an adjusted net loss of $30 million for the first quarter, driven by $69 million of net losses associated with its hedges.

For newbies, WTI is surging and great drilling weather is returning to the Bakken.

So, why are the number of rigs dropping back into the high 50s? Why? There as many DUCs as ever -- wells are being drilled to depth, but not being completed? Why? WTI is surging faster than I expected? What's going on?  There should be more takeaway capacity than necessary and North Dakota has relaxed penalties on flaring. There seems to be a lot of activity in the Bakken but not a lot of production and yet the price of oil is moving higher faster.

These are my thoughts.

First:
Second:
Third:
Fourth:
These are some ideas. I suppose there are many other reasons, and roughnecks in the field also have some pretty good insight as to what it going on. But it has to be surprising to some folks that WTI is now solidly above $70 and yet the Bakken (measured by the number of active rigs and the number of DUCs and inactive wells) seems to be "holding back.

But, with WTI surging to  $70 one still wonders why certain metrics seem to be holding back int he Bakken. Not worried. Just idle rambling.
Posted by Bruce Oksol at 5:37 PM No comments:

Hey, this is pretty cool. Earlier this week, I posted a new poll at the suggestion of a reader, whether WTI would hit $85 by August, this year, 2018.

Today, this article by one of the experts, Dan Yergin: "oil could hit $85 by July."

Comment:
Having said that, Dan Yergin probably knows this business better than anyone. I would be curious what his thoughts are regarding oil reserves, whether they matter.
Posted by Bruce Oksol at 10:43 AM No comments:

For "Big Oil," size doesn't matter. Over at Reuters. Your thoughts?


A decade ago, the news that the world’s top oil and gas companies had less than 12 years of production left in their reserves might have caused a panicked sell-off in their shares.

But as consumers try to move away from fossil fuels to cleaner and cheaper energy sources, investors and executives say reserve size is no longer the gold standard for measuring the value and health of a company.

The cost of developing existing reserves and the amount of carbon those reserves produce has now become more important, they say. This is leading to a profound shift in company strategies.

An analysis by Reuters and Guinness Asset Management of the annual reports of those eight companies shows that the size of their oil and gas reserves, when added together, fell to 91 billion barrels in 2017. That was the lowest since the same amount in 2005.

So, Ron Bousso, over at Reuters, says "size doesn't matter." Your thoughts?

I'm talking about Ron Bousso over at the linked article above.

The data points from the article:
First observation/comment:  I think the writer was looking for a story; put a lot of time into researching the data; failed to get much of a story; but needed to recoup time spent on research to write something.

Second observation/comment: I can't believe the writer did not include the cumulative reserve life for the past ten years -- we have nothing to compare rhetoric with data.

Third observation/comment: anyone following the share price of these eight companies is aware tha the company performing the worst over the past two years is also the company with the worst resever numbers: XOM. XOM is certainly paying the price for not maintaining leadership in this area. Other than reserves, almost everything else was "equal" among the eight majors; companies with improving reserve numbers are doing better in the stock market

Fourth observation/comment: so, size does matter, but don't let me influence how you vote over at the sidebar poll.

1. Exxon, who did the worse, saw reserves life shrink from 17 years in 2014 to 15 in 2017. C'mon man, give me a break -- is that really all that significant. I don't think we really know the Guyana potential just discovered by Exxon

3. The writer suggests in the final paragraph that "10 - 12 years reserve life should be fine." And where does XOM stand? at 15 years, 50% greater than 10 years reserve life. Yeah, something tells, me XOM knows that reserves matter. The equity market has told XOM that the size of reserves also matter.

Now, how does the author "rationalize" that it's okay that reserves have shrunk? Here it is, the first argument:


"With electric vehicles on the ascent and a peak for fuel demand on the horizon, the focus on the reserves is shifting to the quality of the reserves rather than the quantity.

One almost wonders if the writer is "talking his book," or working for XOM to reassure investors that just because XOM seems to have lost its mojo is no cause to worry. I can guarantee you that if XOM announces an "elephant" discovery tomorrow, it's share price will surge.

Five year look-back for XOM, Shell, Statoil, and Chevron, you decide. By the way, for newbies, when evaluating oil companies there are only two parameters to follow in the big scheme of things: a) execution (all oil companies have the same investing/market/environmental challenges -- it's an open book test); and, b) size of reserves. If you don't believe me, imagine what Shell's share price would do today if Shell announced that its crude oil life reserve had dropped to six months and they're not worried because they believe the future is Musk/Tesla/EVs (LOL): 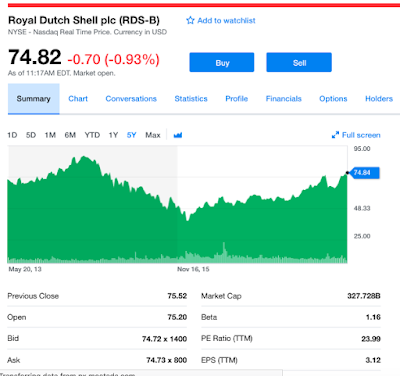 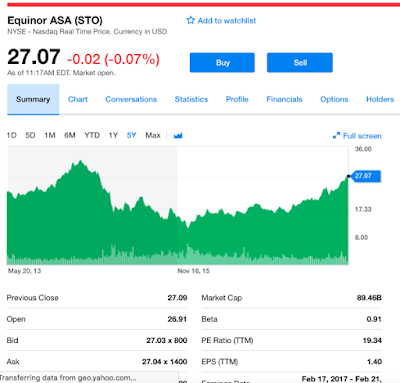 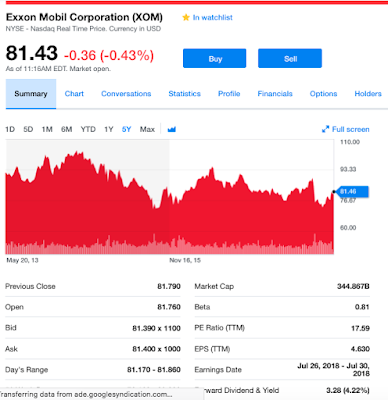 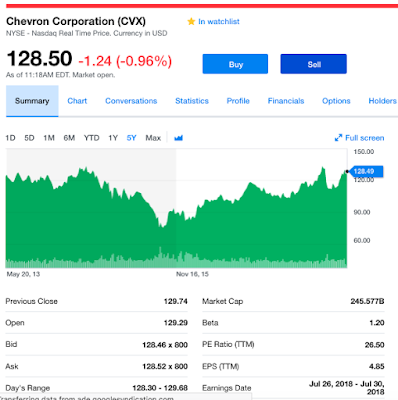 By the way, I have thoughts on cumulative reserve life but this post is already too long and I need to move on. Maybe later.
Posted by Bruce Oksol at 10:23 AM No comments:


The decline rate of our total oil inventories has been a bit understated because no one has been paying attention to the SPR, which has been falling too. In this reporting week the SPR decrease was at 217,000 barrels per day, greater than the decrease from commercial crude...

Steps Toward Making Louisiana A Crude-Exporting Powerhouse -- May 16, 2018

The Pelican State has a number of positive attributes for crude exporting, though, including the Louisiana Offshore Oil Port (LOOP), the only port in the Lower 48 that can fully load the 2-MMbbl Very Large Crude Carriers (VLCCs) that many international shippers favor. It also has mammoth crude storage, blending and distribution hubs at Clovelly (near the coast and connected to LOOP) and St. James (up the Mississippi).

In addition, St. James is the trading center for benchmark Light Louisiana Sweet (LLS), a desirable blend for refiners. The catch is that almost all of the existing pipelines at Clovelly flow inland — away from LOOP — many of them north to St. James. That means infrastructure development is needed to reverse these flows southbound from St. James before LOOP can really take off as an export center. Today, we consider Louisiana's changing focus toward the crude export market and the future of regional benchmark LLS.