The Oasis Helling Trust wells in Alkali Creek have been updated.
Posted by Bruce Oksol at 11:29 PM No comments:

Production profile for only the last year; this well has shown no production decline since being completed. This well is a directional well, not a horizontal, and it was not fracked. 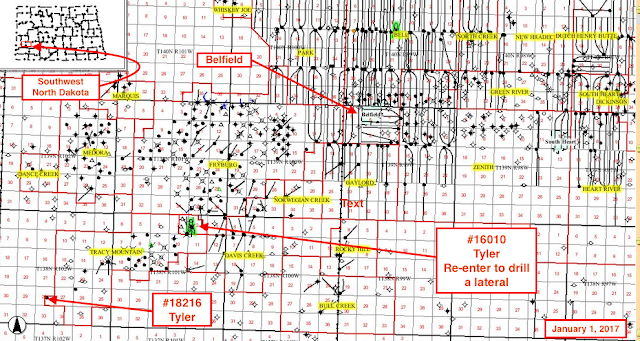 Nice Production After Being Returned To Status -- January 1, 2017

Note increase in production from 2,000 bbls/oil/month back in 2015. It was taken of-line for a number of months while a neighboring well was being fracked.

All top stories (tab at the top)

This is really, really cool. After I posted the above, I did a google search, energy top ten stories 2016.

This was the first hit: energy trends.


#1: Donald Trump wins presidency (this was also my first choice)
#2: OPEC agrees to production cuts (at top of my list also)
#3: DAPL: ditto
#4: coal bankruptcies -- I did not mention coal at all on my long list
#5: oil and natural gas prices bottomed: premature, but probably accurate;

It's interesting that no one -- literally no one -- even mentions the "fact" that the Russians "stole" the election from Hillary as a "top story" of 2016. I suppose it's because anyone paying attention already knew back in 2013 that the Russians were capable of asymmetrical warfare (e.g. cyberwar). The WSJ has the story. My hunch: the president missed that intelligence briefing. [By the way, this is another binary factoid: either the US intelligence network (all 17 agencies according to Hillary) knew about Russia's action before the election but failed to act; or, the US intelligence network was not aware of Russia's cyber attack until after the election. I suppose there is a third possibility: President Obama was told but wanted to see how this would all play out, knowing, in his own words, that Hillary would win anyway.]


From Russia With Love, Matt Monro

2017 should be recognized as the 10th year anniversary of the Bakken boom. The boom began with an EOG well in the Parshall oil field in 2006, but I've always "felt" the boom began in 2007. The second "confirmatory" well was perforated/fracked/completed in March, 2007.

History of the early Bakken: 2004 - 2006.
Brief history of oil production from the Bakken.