In tomorrow's WSJ: Chesapeake Energy drills deeper for profit. Data points:
So, why in WSJ now? 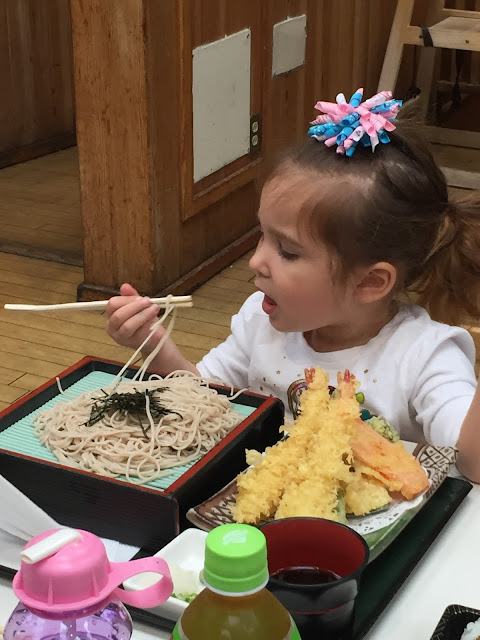 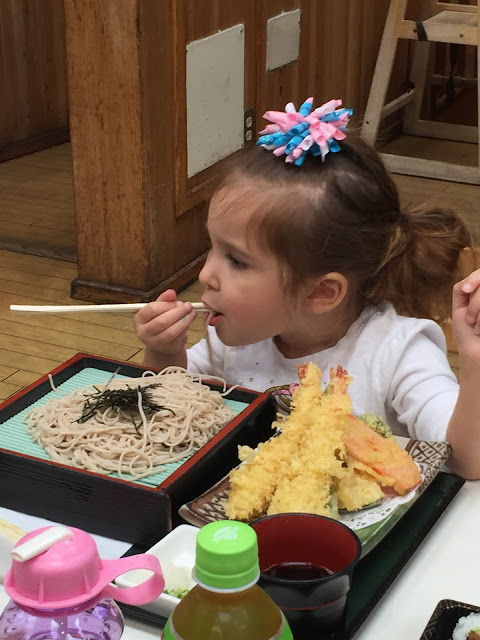 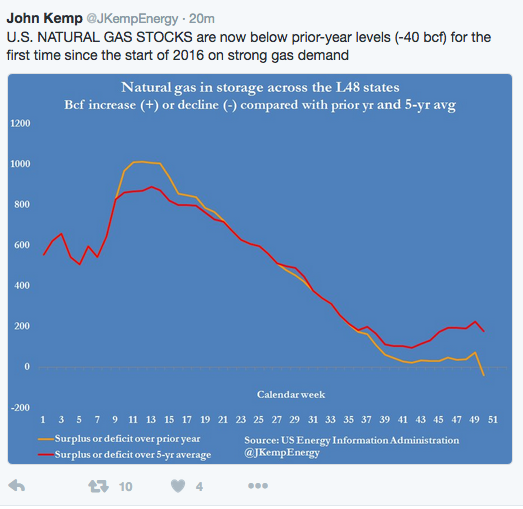 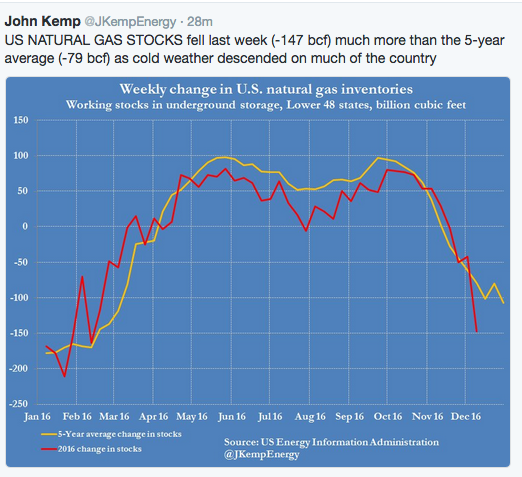 In North Dakota, crude oil production for the month of October, 2016, went above the 1 million bopd threshold again.

Two oil fields that saw a healthy surge in production were Twin Valley and Eagle Nest.

For an explanation of this spreadsheet, see this post:

As noted previously, the 523% increase in Twin Valley was due to Whiting shutting in all its wells in Twin Valley in September and then bringing them back on line in October.

The 139% increase in production in Eagle Nest can be explained by the phenomenal new wells that Halcon has been reporting. Eagle Nest oil field has been updated.

A big "thank you" from a reader for sending me this link.

The article provides a lengthy, in-depth history of the DAPL.


Even [tribal leader] Archambault acknowledged to a crowd gathered after his victory:

“That pipeline had every right to go through, but because of the support that we have and the people who gather and are a part of this, we are able to build enough noise to help America understand.”

The article provides an overview of other issues regarding Native Americans.

Bottom line: the Native Americans, with the help of the Obama administration, buried their future at Standing Rock.

According to a friend of a friend of a friend who said something to a reader who sent me a note, apparently the going rate for DAPL protesting is:
Actually, the correspondence is much shorter: protestor to non-protestor to reader to me. $19/hour is well above the $15/hour minimum wage some folks are advocating. The Bakken continues to be a great place to work.

I am in the process of transcribing my handwritten notes to my literature blog.

The parallels between the Spanish Civil War and the Syrian Civil War are interesting.

These are my initial notes, just from the introduction, early chapters. The notes may be difficult ot understand because they are as I originally wrote them, unedited:

The author got it exactly right, p. 41: "The conflict in Spain, remarkably, was at the same time, both a right-wing military coup and a left-wing social revolution."

p. 48 - 49: The Non-Intervention Committee in London, a sham (correlates with the Obama doctrine in the Mideast)

Hitler: saw advantages
Stalin saw all of this; he waited in vain for Britain or France to aid the Republic; never happended -- p. 49

In Syria, "they" were waiting for US, EU, or Great Britain to act. No one acts. Obama actualy withdraws troops from Iraq. Vacuum leads to ISIS. Finally, Russia intervenes.
Posted by Bruce Oksol at 9:08 AM No comments:

Well, that was east. The Fed raises "rates" yesterday; market takes a bit  of profit-taking; that's now old news, and the market is up again today.

NYSE:
Than you, Mr Trump and Ms Yellen (I do not own any XLNX but I bought this some years ago -- buy and hold -- as a long term investment for one of my daughter's portfolio). This is not a recommendation one way or the other at this point. Just something for the archives. 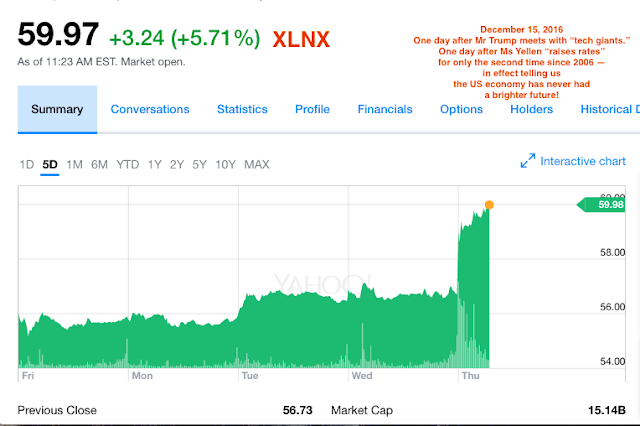 Posted by Bruce Oksol at 8:45 AM No comments:

December 18, 2016: the long cold winter for California's pension fund is coming. Data points:
Advice from CalPERS board member: "I think that we need to step back and breathe."

California: America's largest pension fund -- a 7.5% annual return is no longer realistic.  -- WSJ. Data points:
One can only assume CALPERS administrators are happy with the Trump rally; this rally would not have happened under a Hillary presidency.  The most disturbing "disclosure" in the recent Vanity Fair piece was how insular (autocratic? dictatorial? delusional?) Hillary had become. 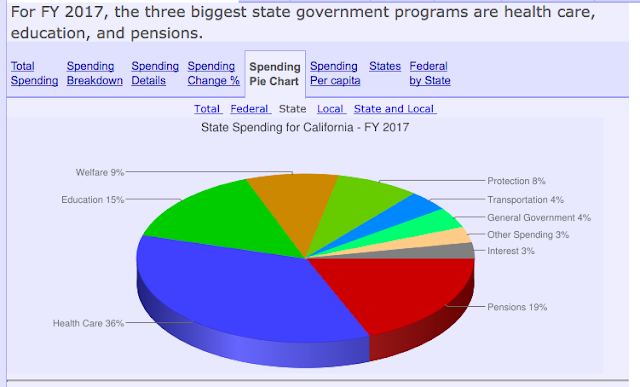 
Saudi Arabia has long said it could produce as much as 12 million barrels per day (bopd) of oil if needed, but that pump-at-will claim - which would require huge capital spending to access spare capacity - has never been tested.

Sources say the kingdom may have stretched its current limits by extracting a record of around 10.7 million bpd this year, which could be one reason why Riyadh pushed so hard for a global deal to cut production.

Riyadh, the world's top oil exporter, felt the burn of cheap oil this year when crude was trading below $50 a barrel, as the reality of its costly war in Yemen and the task of shaking up its economy to create thousands of jobs began to sink in.

"Twelve million bpd has been planned since 2008-2010 and every annual budget worked towards that goal," the source told Reuters on condition of anonymity.

To achieve that goal, the company has annual operating expenses (opex) of $20 billion and capital expenditure (capex) at around $40 billion, the source said. "When the 12 million bpd plan is achieved by 2018, the overall capex will fall to $20 billion," he added.

We're starting to get some big numbers:


Peak oil? Okay, this story was not about crude oil, it was about natural gas, but the point is made. Reuters is reporting that In the waters off Malaysia, Royal Dutch Shell is finding gas quickly and cheaply to replenish depleting fields where only a few years ago geologists had lost hope of discovering any new reserves.


The Anglo-Dutch group is combining the latest technology with the wisdom of industry veterans to unlock new oil and gas deposits where it already operates, usually within 20 km (12 miles) of existing platforms.

The result has been a string of finds which, while modest in size, can generate cash rapidly to suit an era of drastically reduced exploration budgets across the energy industry.

After a costly flop in Alaska, Shell has turned away from giant "frontier" projects, focusing instead on exploring closer to home, such as in Malaysia where it has been producing oil for more than a century. Many of its rivals are following suit.

"With new data, new seismic and new brain power you can find extraordinary amount of hydrocarbons for the future," Ceri Powell, Shell's head of exploration.

Moreover, based on the latest 15-day weather forecasts, our models are projecting demand remains well above 2015 levels for the balance of the month (see blue-dotted line in Figure 4). In fact, current forecasts are calling for the highest demand for December since the winter of 2013, assuming weather materializes as currently expected.

All in all, based on the current weather forecasts, December 2016 consumption should average close to 10 Bcf/d higher than 2015, and about 11 Bcf/d higher if you include exports. And on a net basis, including all supply and demand components, the net balance (supply minus demand) this month would be about 14 Bcf/d tighter than last year. That is a long way from where we were in November, when we were just 0.6 Bcf/d tighter year on year.