A blistering start to summer is helping put U.S. natural gas futures on course for the biggest gain in eight years.

Gas has surged 17 percent this year, rebounding from a 17-year low. Drillers, burned by earlier declines, are refilling storage at half last year’s pace as extreme heat boosts the use of air conditioners, increasing gas demand from power plants.

By November, supplies will probably drop below the five-year average, the benchmark for normal levels, for the first time in 13 months, based on storage rates.

Just four months ago, gas plunged after the warmest winter on record left the market with a glut large enough to last through the year. Instead, hot weather and a slowdown in shale production are eating into the surplus, signaling an era of higher prices as gas exports rise and electricity generation cuts into excess supply.

“We’re moving toward a potentially serious deficit in the supply-demand balance for this coming winter,” said one analyst.

Gas inventories were 25 percent above the five-year average in late June, down from 54 percent in April. An extended slide in production would erase the surplus by the end of the year, leaving stockpiles at a deficit to normal levels for the first time since May 2015 and pushing prices to $3 this month.

The US Fed given "cover": the Fed probably won't raise rates until Brexit impact clearer. It could take several years for the Great Britain / EU relationship to unwind.

Even with a struggling market, we have 180 NYSE issues hitting new 52-week highs, including:
New lows: 46 -- a bit more than the last few days.


The GDPNow model forecast for real GDP growth (seasonally adjusted annual rate) in the second quarter of 2016 is 2.4 percent on July 6, down from 2.6 percent on July 1. The forecast for second-quarter real consumer spending growth ticked down from 4.4 percent to 4.3 percent after yesterday's light vehicle sales release from the U.S. Bureau of Economic Analysis. The forecast of the contribution of net exports to second-quarter real GDP growth declined from 0.25 percentage points to 0.15 percentage points after this morning's international trade report from the U.S. Census Bureau.

And didn't Janet Yellen suggest there's a 60% chance of rain a recession? Oh, I'm sorry, it was Deutsche Bank but there was a big picture of Ms Yellen at the story/link. The 60% chance for a recession is for the next 12 months.


It is a simple pleasure in a classic summertime locale: Pull a car between the stripes on the parking lot here, a ribbon of asphalt parallel to the water atop a sloped wall in the sand, and look right out over the beach, where one can see Cape Cod Bay meeting the Atlantic Ocean.

Here amid the unearthly dunes, Herring Cove Beach — and especially its north parking lot — draws locals from just down the road and travelers from hundreds of miles away, who might arrive in camper vans studded with American flags. Some come for a quick swim, others to watch the sublime sunsets, famous in New England because the beach faces west, not east.

But there is a problem, evident in the chunks of asphalt lying on the sand and the deep fissures in the lot, parts of which are so damaged that they are off limits to parking: The beach is eroding, and parts of this beloved spot, built in front of the dunes, not behind them, are slowly crumbling into the ocean.

The result here at the Cape Cod National Seashore raises a practical dilemma in a setting meant to be a place to escape: how to react to rising seas and eroding coastlines as climate change looms for coastal communities across the nation. The decision here was to demolish the parking lot and construct a new one 125 feet behind it, allowing for a restored shoreline in front of it.

If I had "all the money in the world" or better said, if "money was not an issue," I would have a home in Provincetown.

From the Director's Cut for April, 2016, data and my comment:


I don't know if folks were surprised by that or not. I took it in stride but did not think much about it. I missed the analysis by Rystad Energy which was posted June 23, 2016:


Rystad Energy expects horizontal oil completion activity in the US Shale to outpace drilling operations by 30% in 2H16, resulting in the contraction of DUC inventory by 800 wells.

The additional output will be more than sufficient to balance the base production decline. The inventory of 4,000 drilled but uncompleted oil wells (DUCs) is estimated to hold close to 2 billion barrels of oil reserves.

“Research shows that operators are now starting to complete wells that have previously been put on hold deliberately. This comes as more than 90% of the accumulated oil DUC inventory can be commercially completed at a WTI of 50 USD/bbl,” says Artem Abramov, Senior Analyst and product manager at Rystad Energy.

The recent extreme production decline - among the key crude producing states, North Dakota suffered from an all-time high historical decline rate of 70,000 bopd in April 2016 - fell far outside a natural 10,000 - 20,000 bopd range, which one would expect as a result of current completion activity and mature base production.

The significant decline acceleration appears to have come from older “low decline” wells brought on-line before 2016.

“It is not the first time such temporary shifts in base decline are observed, and they were caused by road restrictions imposed by the state over the month. This trend is unlikely to persist and should not be extrapolated to the US Shale industry in general,” says Abramov. 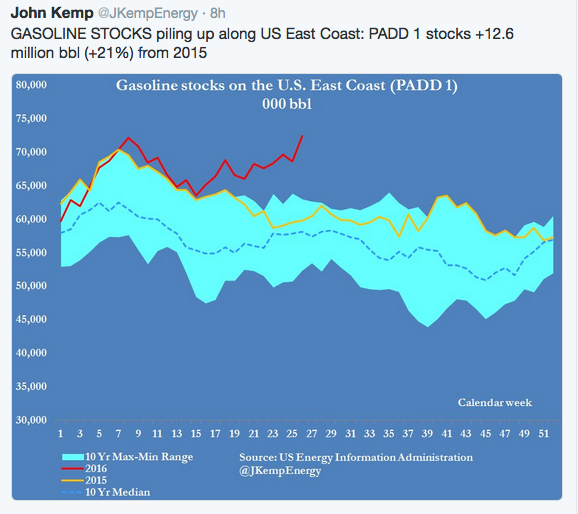 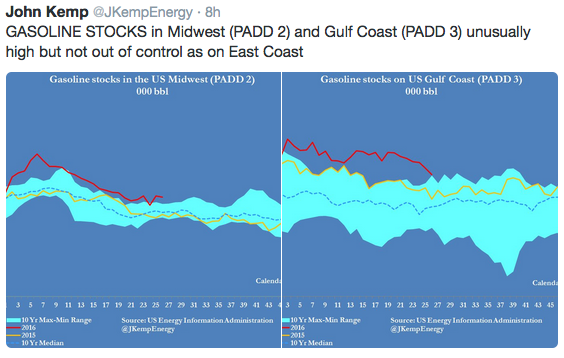 It looks like the project is already costing more than originally estimated.

But first the news that will shock someone when they find out how much this is really going to cost.


The July 3 storm destroyed a big part of a half million dollar project (sic): the start of a fertilizer plant for farmers and ranchers at Dakota Gasification Company, near Beulah.

That's what was reported on the news or in the transcription: one-half million dollars.

But at least the headline writer got it right. The screenshot of the on-line story: 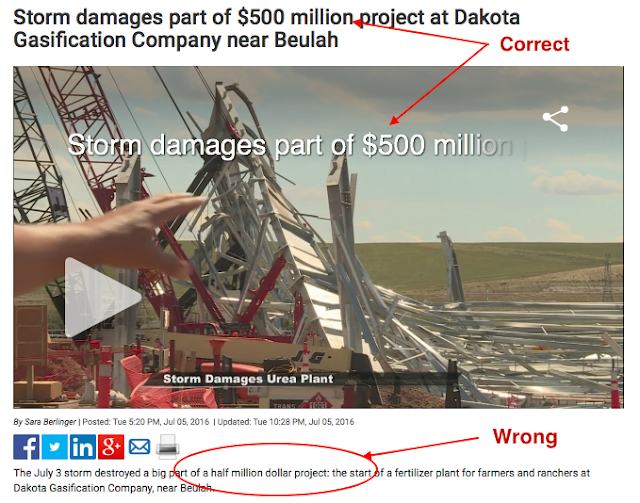 Two comments:
A much bigger question, seriously, though, is how much this will set the project back. It was supposed to be completed by next spring.
Posted by Bruce Oksol at 8:01 AM No comments:

"Sorted Food" (or "SORTEDfood"/sortedfood.com) was recently featured in The Wall Street Journal. I've only seen a few episodes so I can't say for sure whether I will subscribe or continue to follow but if you are a foodie or interested in recipes, this might be something you want to try.

OPEC countries need oil to average"around $100/bbl" for the year to meet their national budgets. Some countries may need slightly less than $100-oil; many need significantly more. Saudi Arabia is said to require an annual average of about $100/bbl.

The prices for oil this year are noted below. At the end of each month, I update the price for the most recent month -- just a rough number of what seemed to be the "average" price of WTI for that month.

For the first six months the number is the approximate price for WTI that I posted at the end of the indicated month. The last six months of the year, obviously, are estimates based on what's being forecast by different agencies, different bloggers.

I haven't seen anything to suggest we will get much above $50/bbl for the rest of the year, though some optimistically say we should see $60-oil this autumn.

But right now, the average for the 2016 calendar year looks like it is going to come in at about $45, way below what Saudi Arabia and the rest of OPEC need to maintain their budgets. 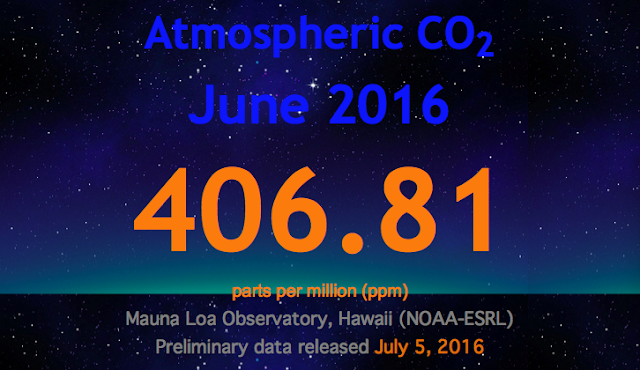 Atmospheric CO2 varies seasonally, so one cannot necessarily compare month-after-month. It is best to compare year-over-year. Atmospheric CO2 tends to peak in the spring (May) and then fall steadily through the summer, reaching its low point for the year around September, at which time it starts to rise again, rising during the winter months (northern hemisphere) and peaking around May, where the cycle starts all over again.