On the Permian, watch out for same target layer under different names (e.g., EOG and a few others calls "Avalon" what a lot of the rest of the industry calls "Bone Spring").  Same can occur in other basins (e.g. "Utica" versus "Huron/Point Pleasant").


For example, when querying horizontal Bone Spring wells in the Delaware Basin, a few of the most common reported reservoir naming conventions are some iteration of the spelling of Bone Spring, Trend Area and Wolfbone Trend (yes even for horizontals). This may very well be sufficient for some analytical workflows; however, it is not a true apples to apples comparison.

For the scope of this post, I have limited the zones down to four: the Avalon and the First, Second, and Third Bone Spring intervals.

The entire Avalon/Bone Springs has a thickness that ranges from roughly 2,000 to 4,000 feet, depending on the portion of the basin under observation. The isopach map below gives a spatial representation of the gross thickness of the entire Avalon/Bone Springs section throughout the Delaware Basin. This may even shed a bit more light on the range in possibilities of where a lateral wellbore can be strategically placed. 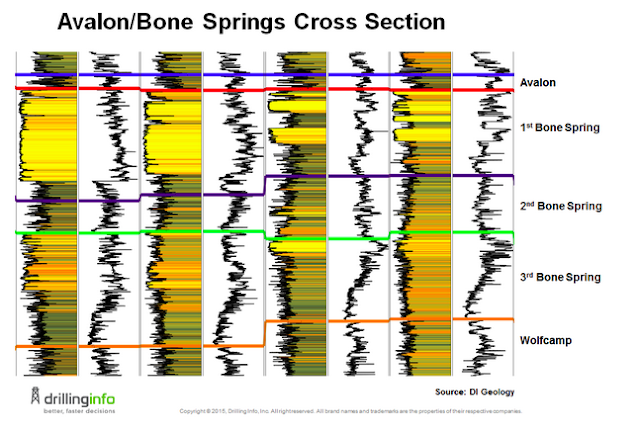 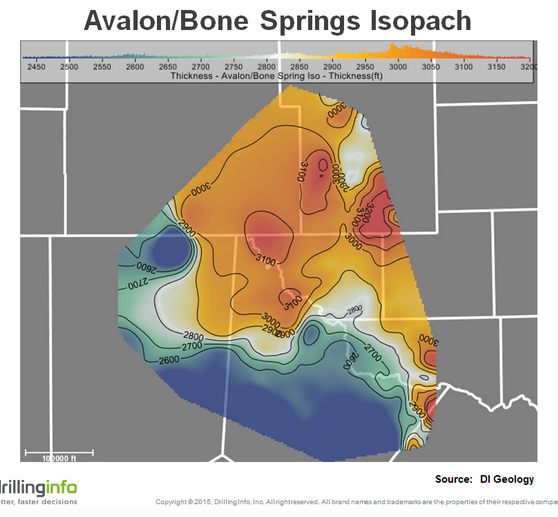 Wow, I'm in a good mood. The "comments app" seems to be working again, albeit a bit squirrelly.

But what really puts me into a good mood is the fact that the USGS is reporting new assessments, updated assessments, and first-time assessments for oil and gas plays across the US. I have posted several of them in the past twelve hours. Some of the posts still need some cleaning up. I haven't linked all the posts yet, but for now, simply scroll down. I think there are about three USGS assessments regarding the Permian Province -- that's the official name, I guess.

The Permian Province is made up of three basins: the Midland to the east; the Central Basin; and, the Delaware Basin to the west.

In addition to these two, Mike Filloon lists a few others, in his October 16, 2015, posting. Some of them he mentions:
The Midland is an old, old field; the Delaware is much more recent. That's why we don't hear as much about the Delaware or know as much about it. I believe this is where the recent boom has been focused -- in the sense that new operators coming in have looked to the Delaware. Obviously there is a boom going on in the Midland, also.

The "Wolfberry" is an old term: it encompasses the Wolfcamp and the Spraberry in the Midland Basin.

I'm with Sophia this morning: gymnastics and swimming lessons.

Then we head over to a water polo tournament with the oldest granddaughter, Arianna.

My wife and Olivia are at an all-day art/painting workshop.

We have the granddaughters all week, through tomorrow, Sunday. Their parents are out-of-town, on business/pleasure.

I have serious doubts about the "expertise" of Art Berman and all the "Peak Oil" folks after seeing the USGS assessments of the Permian.

Maybe more on this later. But clearly, Art Berman and the "Peak Oil" folks have seriously underestimated the fossil resources in the US.
Posted by Bruce Oksol at 9:55 AM 6 comments:

Email ThisBlogThis!Share to TwitterShare to FacebookShare to Pinterest
Labels: Permian

The abstract from the USGS:

The Permian is divided into three divisions -- the Midland (east), Central Basin, and the Delaware (west).

Other than the Wolfcamp and the Spraberry I am not aware of a recent USGS assessment of other formations or plays in the Permian.

The USGS recently posted its assessment of the Eagle Ford in Texas.

The USGS is currently assessing the Bakken/Three Forks in the Williston Basin, which will update the 2013 assessment.


The Ride, Hank, Sr, song by David Allan Coe
Posted by Bruce Oksol at 9:37 AM No comments:

The abstract from the USGS:


The U.S. Geological Survey completed a geology-based assessment of undiscovered, technically recoverable continuous petroleum resources in the Wolfcamp shale in the Midland Basin part of the Permian Basin Province of west Texas.

This is the first U.S. Geological Survey evaluation of continuous resources in the Wolfcamp shale in the Midland Basin.

Since the 1980s, the Wolfcamp shale in the Midland Basin has been part of the “Wolfberry” play. This play has traditionally been developed using vertical wells that are completed and stimulated in multiple productive stratigraphic intervals that include the Wolfcamp shale and overlying Spraberry Formation.

Since the shift to horizontal wells targeting the organic-rich shale of the Wolfcamp, more than 3,000 horizontal wells have been drilled and completed in the Midland Basin Wolfcamp section.

The U.S. Geological Survey assessed technically recoverable mean resources of 20 billion barrels of oil and 16 trillion cubic feet of associated gas in the Wolfcamp shale in the Midland Basin.

So, note: this is the Wolfcamp shale in the Midland Basin. The Wolfcamp underlies the entire Permian, all three divisions of the Permian -- the Midland (east), Central Basin, and the Delaware (west).

I am not yet aware of a recent USGS assessment of the Wolfcamp in the Delaware.

Other than the Wolfcamp and the Spraberry I am not aware of a recent USGS assessment of other formations or plays in the Permian.

The USGS recently posted its assessment of the Eagle Ford in Texas.

The USGS is currently assessing the Bakken/Three Forks in the Williston Basin, which will update the 2013 assessment.
Posted by Bruce Oksol at 9:33 AM No comments:

Wow, I'm in a good mood. So much great stuff being reported. I can't keep up but that's good news.

This article needs to be archived. I finally understand the Permian a bit better. Mike Filloon had the Permian figured out many years ago, but, for me, it never sunk in. Re-reading Filloon's articles on the Permian and now this article in the OGJ, I finally have a better understanding of the Permian. The OGJ article was published June 4, 2018, but other sites suggest the USGS Permian assessment was done during 2016, and first reported in 2017, with some additional articles on the same subject after. For now, I guess we will refer to this as the USGS Permian Assessment, 2017.

Unfortunately, it may be behind a paywall. Here are the high points.

The Permian, there are three sub-basins:
The formations, many, but these are the most important right now:
Intro: the USGS recently assessed the Wolfcamp shale in the Midland basin portion of the Permian basin for continuous (unconventional) oil and gas resources, and completed a reassessment of the Spraberry formation for both continuous and conventional oil and gas. Combined, the assessments of the Spraberry formation and the underlying Wolfcamp shale in Midland basin comprise the largest domestic continuous oil assessment in the contiguous US (including Alaska).

Great graphic with all (?) US producing areas assessed by USGS and undiscovered, technically recoverable resources:
Here's the graphic: 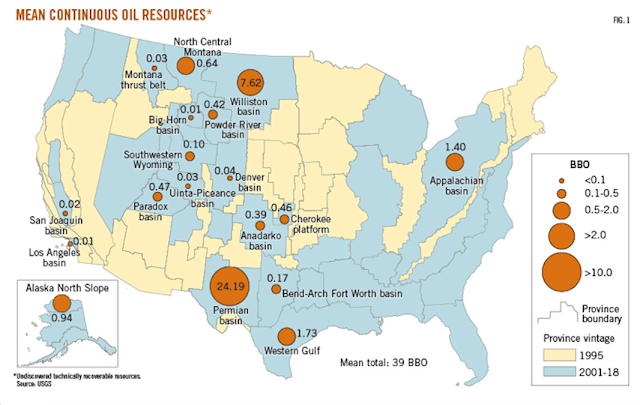 
Original Post
Four screenshots because I couldn't get them in just two screenshots.

This is a google search: the first two pages.

See if you can find the glaring omission in the results. Hint: Google ranks the order of results on two major data points:
Here are the screenshots: 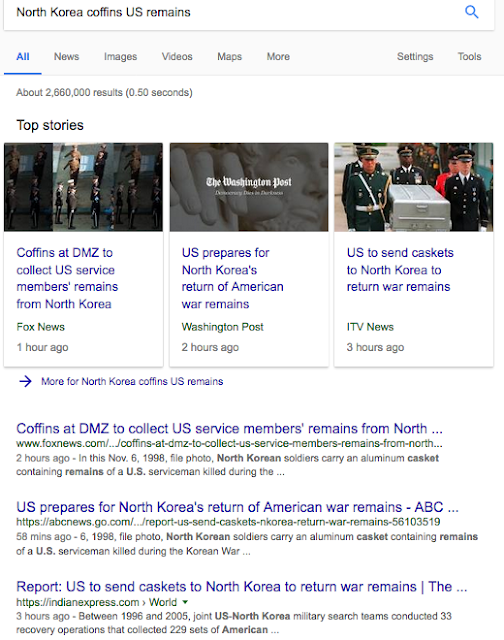 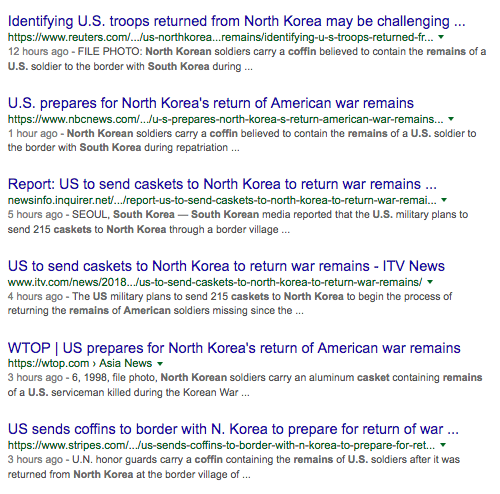 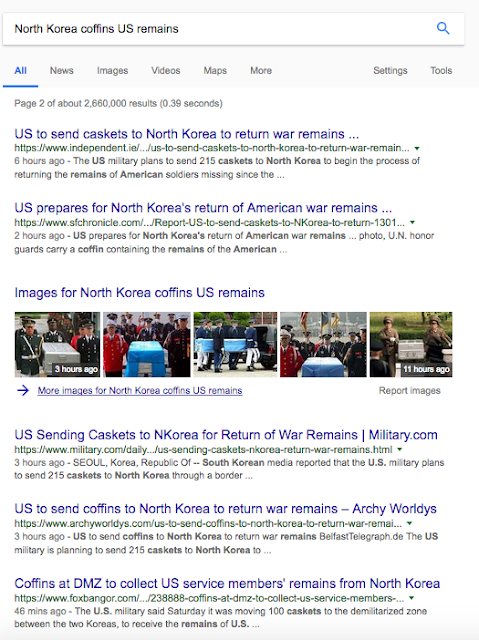 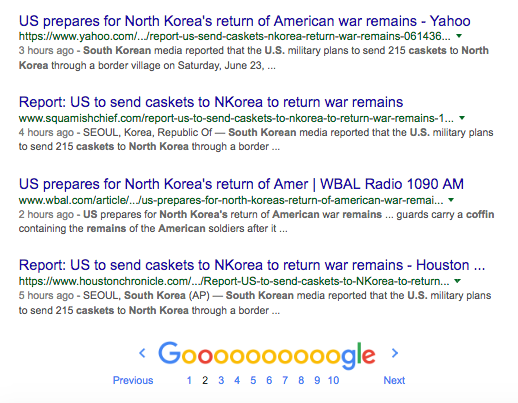 Posted by Bruce Oksol at 6:56 AM No comments:

The comments app now works -- at least as far as I can tell. It worked this evening when I was testing it. I should know more as the week(s) go by.

Thank you, everyone, for your patience.

I did find all the "old" comments that folks sent in that did not get posted. I spent most of the evening posting/replying to them.

I missed a few, I'm sure, and I haven't gone all the way back -- just too many comments. Much appreciated.

My biggest surprise: how closely folks read my notes. Wow, folks catch a lot of trivia I thought no one would notice. I don't know if that's good or bad. LOL.