Some housekeeping. This has been posted before but for various reasons I'm posting it again. From technocrunch:

AWS today opened its re:Invent conference with a surprise announcement: the company is bringing the Mac mini to its cloud.

These new EC2 Mac instances, as AWS calls them, are now generally available. They won’t come cheap, though.

The target audience here — and the only one AWS is targeting for now — is developers who want cloud-based build and testing environments for their Mac and iOS apps. But it’s worth noting that with remote access, you get a fully-featured Mac mini in the cloud, and I’m sure developers will find all kinds of other use cases for this as well.

Given the recent launch of the M1 Mac minis, it’s worth pointing out that the hardware AWS is using — at least for the time being — are i7 machines with six physical and 12 logical cores and 32 GB of memory. Using the Mac’s built-in networking options, AWS connects them to its Nitro System for fast network and storage access. This means you’ll also be able to attach AWS block storage to these instances, for example.

Unsurprisingly, the AWS team is also working on bringing Apple’s new M1 Mac minis into its data centers. The current plan is to roll this out “early next year,” AWS tells me, and definitely within the first half of 2021.

Both AWS and Apple believe that the need for Intel-powered machines won’t go away anytime soon, though, especially given that a lot of developers will want to continue to run their tests on Intel machines for the foreseeable future.

Posted by Bruce Oksol at 7:31 PM No comments:

December 19, 2020: in the short term the big investment story going forward will be the push and pull of the "re-opening" trade vs the "lock-down-for-longer" trade. However, by the end of 2021, Chinese flu will be behind us and, all things being equal, the global economy will take off.

Whoo-hoo! I finally heard it from a talking head, and I agree: everyone thinks of Amazon as an e-retail company but in fact it's all about AWS. See this post. And the kicker: if somewhere down the road, the US government forces Amazon to break up, it will be very easy to find the fracture lines. Right now, I can think of three major Amazon divisions: retail, logistics, and cloud. Posted December 15, 2020.

The darling of Wall Street in late 2021; then sold off in early 2022 with oil surging, and Russian invades Ukraine. Sold off on March 4, 2022, presenting a buying opportunity.

We've Been Working On The Railroad ...

UNP / BRK-B: thinking out loud. Tesla has moved to Austin.

Posted by Bruce Oksol at 7:08 PM No comments:

Photo of the week:

Did this really happen last night? I did not catch it. I was completely unaware there was even a college football game on a Friday night. So, is there a Rose Bowl Parade this year? 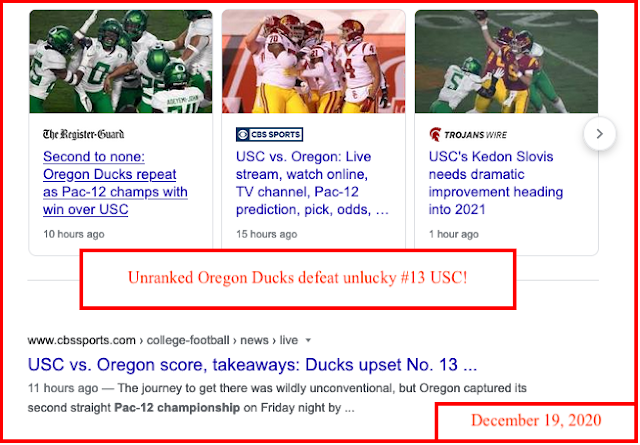 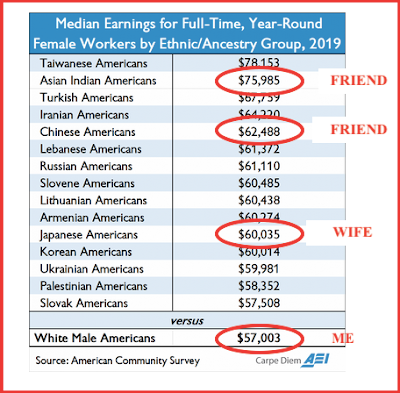 First things first: if you have clear skies during the early evenings for the next few nights, be sure to step outside, look to the southwest, with an outstretched hand, about two hand-widths above the horizon, look for a bright "star." It will be Jupiter. It will be so bright it will almost "blot" out Saturn which will be at the 11:00 o'clock position to Jupiter. On December 21st, the two planets will "be on top of each other" -- you will see a single "star." By 9:00 p.m. (possibly earlier, depending upon where you live), the "star" will be below the horizon. We had trouble making out Saturn two nights ago due to the brightness of Jupiter. We couldn't see anything last night due to clouds.

ZeroHedge: it will be interesting to see if ZeroHedge links / reports this story after all the stories that site posted regarding Sweden, stories that changed the discussion. Swedish officials admit they "blew it." Even the King of Sweden says the country's Covid-10 strategy has failed. Link here.

Holy mackerel! For the first time ever in the pandemic, on a per capita basis, Sweden just surpassed the United States in number of cases. Link here.

Boston is importing liquefied natural gas from Russia, while the U.S. is #1 in natural gas production in the world with arguably the lowest price natural gas in the world. New York Governor Andrew Cuomo has banned hydraulic fracking and new interstate natural gas pipelines in his state, forcing the Northeast (NE) states to look elsewhere for natural gas…across the Atlantic Ocean in the Russian Arctic.

Grids: ISO New England.     ISONY. On a Saturday during the pandemic, following a huge storm, winter storm Gail, almost everything shut down.

Interesting essay, "Why History Goes in Circles" by Eric Ormsby in this weekend's edition of The Wall Street Journal.


Ibn Khaldun pops up in the most unexpected places. This late medieval Tunisian-born thinker (1332-1406) has been celebrated by historians, economists, sociologists and ethnographers, not to mention scholars of Islamic thought, often rather vaguely and without any precise understanding of the nature of his ideas.

He has been called “the father of sociology” or the first “philosopher of history,” among other honorifics. In 1935 the popular English historian Arnold Toynbee, the author of “A Study of History” in 12 volumes, waxed rhapsodical over Ibn Khaldun’s accomplishments, claiming that his “Muqaddimah” (“Introduction” in Arabic) was “undoubtedly the greatest work of its kind that has ever been created by any mind in any time or place.” It doesn’t detract from Ibn Khaldun’s genuine originality to note that this claim is the sheerest hyperbole. Yet it had the happy effect of putting Ibn Khaldun back on the intellectual map, and it contains an element of truth: His speculations on history were unprecedented, his theories both novel and persuasive.

As Robert Irwin notes in his excellent “Ibn Khaldun: An Intellectual Biography” (Princeton, 243 pages, $29.95), his subject’s influence has also been pervasive, if often subterranean.

To take one surprising example: On Oct. 1, 1981, President Ronald Reagan alluded to him in a press conference when he invoked “a principle that goes back at least, I know, as far as the 14th century, when a Muslim philosopher named Ibn Khaldun said, ‘In the beginning of the dynasty, great tax revenues were gained from small assessments. At the end of the dynasty, small tax revenues were gained from large assessments.”

(The president added—O forlorn hope!—“And we’re trying to get down to the small assessments and the great revenues.”) As Mr. Irwin shows, Ibn Khaldun’s cyclical notion of history also underlies classic works of science fiction, such as Isaac Asimov’s “Foundation” trilogy and Frank Herbert’s “Dune.” No other Muslim author, let alone one writing in high-flown classical Arabic, has had comparable influence on thinkers and scholars in both the Islamic world and the West.

Prince Salman is not mentioned in the essay -- you know, the one that has imposed huge tax assessments on his kingdom.
Posted by Bruce Oksol at 10:03 AM No comments:


And then we have, "Tina and the Tourettes":

More cowbell. Be sure to read the comments at this one (you may have to link to YouTube to see the comments):

Social distancing before it was a "thing":

A couple more and then I'm going to call it a night. But this one needs to be followed by Phil Spector's wall of sound:

From the Cher fan club -- The 1990s saw Cher's fourth musical comeback, this time as an EDM legend. When she beat out Britney Spears for Billboard's #1 single of 1999 with "Believe", it was hard to realize that was the same Cher who once knocked out The Beatles off the top of the charts with her first hit song back in 1965. Do you believe in the power of CHER?: