There are a lot of third generation, and maybe fourth generation, folks with a North Dakota connection who are getting "mailbox money" that is a gift from their homesteading grandparents and/or great-grandparents. Good for them. Those that get that mailbox money are reminded of their heritage every month, and, I hope, never forget to count their blessings.

I'm sure we will come back to these some day. Harold Hamm has something up his sleeve. 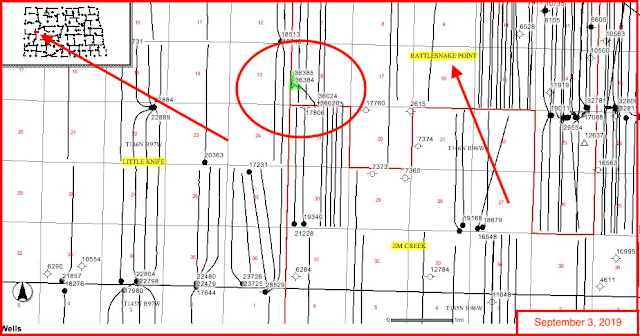 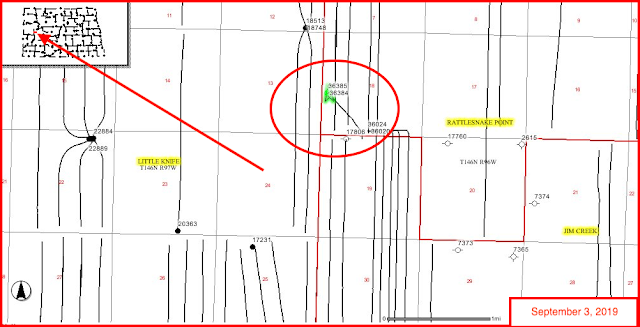 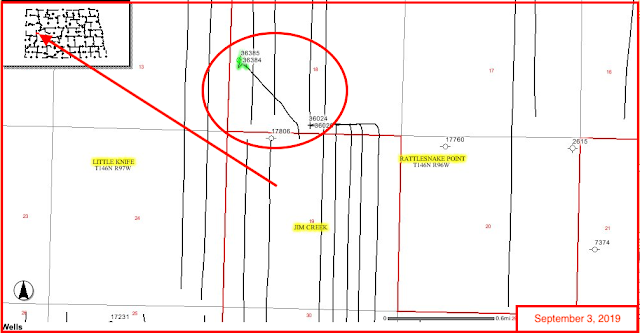 
Something To Think About, Willie Nelson

One one thing wrong with this song: way too short.


Tonight, driving home with Sophia (five years old) from soccer practice, we're on the typical two-lane frontage road, driving south. We're going about 55 mph, parallel to the interstate. A pick-up truck turns directly towards us on the frontage road but stays on the shoulder. I realize immediately that for him to go legally from point A to point B he would have to take a 3-mile roundabout trip to get to point B. But by driving illegally against the traffic, on the shoulder he can get from his point A to his point B, he can be there in less than a quarter mile.

I knew immediately what he was doing. I kept my speed, gave him a bit more room, and a thumbs up -- what a great state.

I feel blessed to have witnessed the "original" Nadia.

Comăneci is the first gymnast to be awarded a perfect score of 10.0 at the Olympic Games, and then, at the same Games (1976 Summer Olympics in Montreal), she received six more perfect 10s en route to winning three gold medals.

Comăneci is one of the world's best-known gymnasts and is credited with popularizing the sport around the globe.[6] In 2000, she was named as one of the Athletes of the 20th Century by the Laureus World Sports Academy.

She has lived in the United States since 1989 and is married to American Olympic gold medal gymnast Bart Conner.

My books this week: 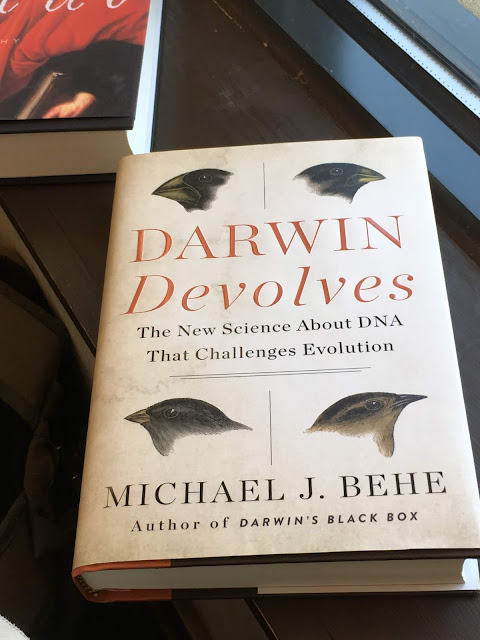 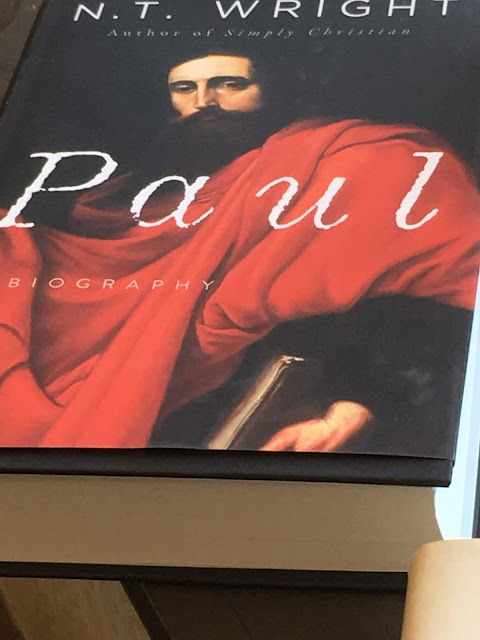 Was the Grand Bahama the Queen's "Katrina"?

This is one of my favorite songs. It begins:

I didn't care for Glen Campbell all that much, but the lyrics to some of his songs were simply incredible -- so many metaphors, such real poetry.

When I moved out to California in 1973, I ran into a most beautiful woman. I left my sleeping bag behind her couch, so I would have something when I went to visit her and stayed overnight ....


Gentle On My Mind, Glen Campbell
Posted by Bruce Oksol at 4:33 PM No comments:

I only just posted the Nordeng wells just a few days ago, at this post.

Look at this! Nordeng is back on line. The well:
Recent production:

Permian: before we get to the Bakken, this from Investor's Business Daily:
Spur Energy, from Houston Chronicle:

WildHorse had focused on the northeastern portion of the Eagle Ford shale.


“August will be a blockbuster month for the industry. Sales are expected to post the largest year-over-year gain since December 2016.” said Thomas King, Senior Vice President of the Data and Analytics Division at J.D. Power.

“Labor Day is one of the most heavily shopped periods of the year, with consumers motivated by heavy discounts on outgoing model-year vehicles and new 2020 model-year vehicles arriving in showrooms. Last year, more than 237,000 vehicles were sold during the Friday-Monday holiday period.”

One exception: Williston Basin up 6.3% to 51 rigs compared to 48 rigs one week earlier. Link here. 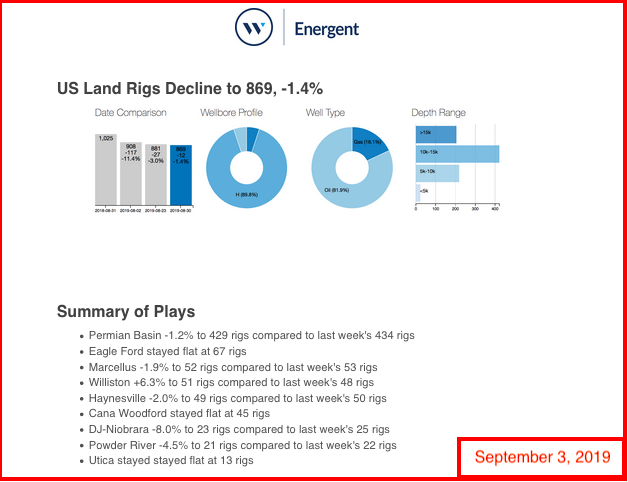 A continuation of "those not paying attention are missing an incredible investing opportunity." 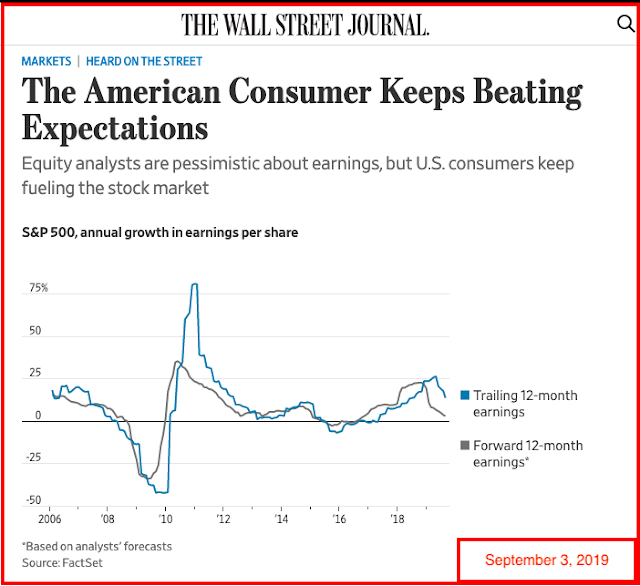 
What is different this time round is that three years of rising employment and pay seem to have imbued household budgets with a higher degree of resilience. Last week, government statisticians revised down U.S. economic growth for the second quarter to 2%, due to the impact of weaker-than-expected exports and inventory investment, but recorded a strong pickup in company earnings and consumer spending—now upgraded to its strongest reading since 2014. Official figures also showed a sharp rise in U.S. consumer spending in July.

This has benefited much of the consumer-led economy. During the first half, earnings declined in S&P 500 sectors like industrials, materials and energy, but this was offset by profit growth in consumer industries, health care and even banks. Manufacturing is, after all, only 10% of the U.S. economy.

As a result, S&P 500 earnings per share are up almost 20% relative to the second quarter of 2018. In more export-dependent Europe, Euro Stoxx 50 earnings are only down slightly over the same period. Profits were much weaker in the 2015-2016 deceleration, particularly in Europe, where domestically focused industries are also holding up much better.

EVs: remember the hand-wringing some years ago about shortage of lithium? Now, from Bloomberg, the lithium industry buildup is outracing the EV boom. More than enough lithium.  Six new mines in Australia; EV sales slow in China.
Posted by Bruce Oksol at 7:47 AM No comments:


Battered by a flood of new supply and limited pipeline takeaway capacity, prices for Permian natural gas and crude oil have spent a lot of time in the valley over the past 18 months. West Texas Intermediate (WTI) crude oil prices at the Permian’s Midland Hub traded as much as $20/bbl less than similar quality crude in Houston last year. That’s a big oil-price haircut that producers have had to absorb while ramping up production. However, the collapse in the Permian crude oil differential was tame compared to what happened with Permian natural gas prices. Prices at the Waha Hub in West Texas traded as low as negative $5/MMBtu, a gaping $8/MMBtu discount to benchmark Henry Hub in Louisiana. As bad as that all was, new pipeline takeaway capacity has arrived, and Permian prices are beginning to claw their way out of the depths. Today, we look at how new pipelines are impacting the prices received for Permian natural gas and oil.