These are the Odegaard pads:

On Monday, the Kansas City-based railway company announced it reached an agreement with Sasol Chemicals USA LLC for the construction and long-term lease of a storage-in-transit rail yard to support the Houston-based company's new ethane cracker and derivative project in Lake Charles, LA.


Four children are among the victims of violence that’s surging across much of Baltimore.

The number of killings this month has already surpassed what we saw last month, which was record setting. The mayor says she is here to listen. A number of residents say they want action.

The violence keeps surging across Baltimore with shooting after shooting, including a daylight gunfight and a body found near Curtis Bay Elementary School that closed it for the day.

A city councilman says the number of children shot is up from three this time last year to 22–a staggering 600 percent increase.

There were 42 homicides in Baltimore last month, making it the city's deadliest in more than 40 years. It appears the Baltimore mayor, bless her, is still giving thugs a bit of space to kill.

A year ago I would have voiced my irritation that President Obama would actually admit he had no strategy for Iraq, ISIS, or the Mideast. Invariably I would receive e-mail from Obama supporters telling me it was better to have no strategy than Bush's strategy.

So, now I just keep my mouth shut and watch.

Between now and the end of the month we are going to see a lot of stories on how ObamaCare will be eviscerated if the Supreme Court decision is based on law, and not politics. The stories are being published as a last-ditch attempt to influence the court. As an example, the lead story in today's Los Angeles Times says the world will come to an end as we know it if the court rules "against" ObamaCare. I will let you in on a secret. Promise not to tell anyone.  The court has already decided. It's a 6-3 decision. All they are doing now is dotting the i's and crossing the t's. Or are they rolling their eyes and crossing their fingers that riots don't break out?

For the archives. I can't post it publicly because it's too sensitive and too politically incorrect, but the Balkanization of the United States will result in the following ethnic groups becoming the elite 1% in the following geographic areas in 2025:

For those who may have missed it, the EPA says fracking has no widespread effect on drinking water. None. Nada. Nil. Zilch.

Hard-core Bakken buffs may enjoy this site. I'm not sure when the linked site was posted but the writer says it was based on NDIC data dated March, 2015, which is pretty current. I scrolled through it, but it looks like a post that might be worthy of another look.

Permits for the proposed 7-well Statoil pad. I often make mistakes when I post this data. If this data is important to you, to to the source. 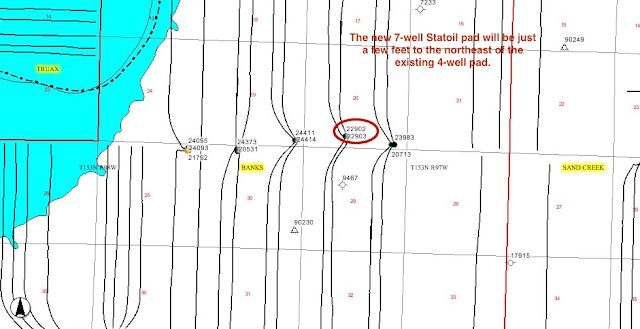 July 11, 2015: frack data is now in the file, and information below has been updated

According to the file report, this well is located five miles south of Watford City; its target was the C facies of the Middle Bakken:

Background gas recorded as high as 1300 units with max gas at 3,907 units near the end of the lateral.

The drilling required six drill bits and took a total of 214 hours to complete.

The Shawshank Redemption is showing this evening on AMC.
Posted by Bruce Oksol at 11:18 AM No comments:


WAHPETON — "The skies are open for business in North Dakota."

That statement was how John Perry, CEO of the Florida-based unmanned aerial system company Altavian, described the milestone occasion of the first drone manufactured in North Dakota as it was rolled out Friday.

The unmanned aircraft systems (UAS) machinery was built at ComDel Innovation in Wahpeton. The company signed an agreement with Altavian to manufacture the UAS drones and components in Wahpeton.

Because of the partnership, ComDel hosted the celebration of the roll-out with representatives from both companies as well as government officials present.
"This is a fairly mature technology and is already being used by public agencies," Perry said at the event. "The recent changes in the regulations now allows for operations so what we really see coming is a big scale-up in the industry.

See also: background.
Posted by Bruce Oksol at 10:56 AM No comments:

Email ThisBlogThis!Share to TwitterShare to FacebookShare to Pinterest
Labels: Drones_Dakota

Wells coming off the confidential list have been updated. I got started late because I took the granddaughters to "computer camp." That's a whole 'nother story, which I will tell later.


In an effort to better present crude oil storage capacity and use across the United States, EIA has prepared new tables as part of the semiannual Working and Net Available Shell Storage Capacity Report. The new series show crude oil stocks held at refineries crude oil in tanks and underground storage in each Petroleum Administration for Defense District (PADD). Previously, this information was only available at the national level. --- EIA

For the archives only. I think a lot of this is way too early to tell. The dust is yet to settle. From Seeking Alpha today, a contributor writes:


The U.S. shale oil and gas producers have turned out to be far more resilient to cheap commodity prices than anyone expected. Amid the downturn, the exploration and production companies have focused on reducing costs and improving efficiency. This has led to a 15% to 30% decline in break-even costs while producers now expect to pump up to 30% more oil from a single well than before.

As a result, despite the significant drop in oil prices since last year, the industry hasn't witnessed a string of bankruptcies. Rather, companies like Whiting Petroleum and EOG Resources have been mulling over ramping up the drilling activity once oil prices stabilize in the $65 a barrel window while Pioneer Natural Resources is already putting additional rigs to work and is eyeing a full rebound, in terms of number of horizontal rigs, by the first quarter of next year.

If it was OPEC's plan to force the exit of major shale oil producer, then that clearly hasn't worked. It wasn't surprising, therefore, when on Friday, the oil cartel said that it would continue producing 30 million barrels of oil a day. By doing so, OPEC has dashed out any hopes regarding a quick rebound in oil prices. Although oil might not climb back to $100 a barrel in the foreseeable future, on a positive note, OPEC has also decided that it is not going to exacerbate the supply glut by raising its ceiling. Perhaps the group is comfortable with the ongoing slow recovery and has no intention of pushing the prices back to under $50 a barrel.

I can't get my mind around these numbers, but ...

This is from a story about burning coal seams in India. In the article:

BCCL accounts for about 7 percent of Coal India's output and has projected growth of 54 percent to 53 million tonnes in five years, according to a company document seen by Reuters.
Its success will help decide how close Coal India gets to its ambitious target of output of 1 billion tonnes by 2019/20.

Meanwhile, over at the World Resources Institute which advocates reduction of greenhouse gases:

Our research shows that 1,199 new coal-fired plants with a total installed capacity of 1,401,268 megawatts (MW) are being proposed globally. If all of these projects are built, it would add new coal power capacity that is almost four times the current capacity of all coal-fired plants in the United States."

But apparently things look much better than alarmists suggest. This is from Bonn, Germany, which really likes coal:

In a boost for hopes to curb climate change, China's greenhouse gas emissions will probably peak in 2025, five years earlier than its stated target.

On current trends, the world's biggest carbon emitter will discharge 12.5-14 billion tonnes of carbon dioxide equivalent (GtCO2e) in 2025, after which emissions will decline.

"This finding suggests it is increasingly likely that the world will avoid global warming of more than two degrees Celsius above pre-industrial levels," they said in a statement.

The average temperature goal, which translates into 3.6 degrees Fahrenheit, is the upper limit targeted by the UN, which is seeking to enshrine it in a global accord in December.

My hunch is that the cutback in flaring in the Bakken and the trend toward decreasing shale oil production, provided most of the good news with regard to the risk of the earth overheating.
Posted by Bruce Oksol at 7:52 AM No comments: