Wow, wow, wow! The current issue of The New York Review of Books, December 3, 2020, has not less than seven essays that look really, really interesting/promising:

I was most curious about Pekka Hämäläinen. His abbreviated wiki bio:

Pekka Johannes Hämäläinen is a Finnish professor of history. His prize-winning book, The Comanche Empire, was published in 2008. Since 2012, he has been the Rhodes Professor of American History at the University of Oxford. He was formerly in the History Department at University of California, Santa Barbara.

"In The Soup." It appears there is nothing new in the book that I have not read in the books in my library on the origin of life. It appears the only new advancement is the movement from alkaline vents in the depths of oceans to pools on land that moved back and forth between wetting and drying. It was not mentioned in the article, but this would take us to tidal pools dependent on the moon but more likely researchers are talking about pools that become much drier than tidal pools become. This is important because many scientists argue that life on earth would not have been possible without the earth's moon. I won't be buying this book simply because it seems that 90% of the book is a re-hash of what has gone before.

Science: In my thirty-four years in medicine, I can count the number of really big disappointments on one hand:

Of the three, the first two seemed solvable but so far, not much advancement. But now, in The WSJ, reports that there my be "real" cures for sickle cell disease. I'm going to have to go back and review Crisper gene editing.

Sophia: Perhaps my favorite Christmas movie -- no surprise -- is A Christmas Story. Somehow Sophia found it on cable television on "her" iPad tonight. I have no idea how she found it and I can't find it on the big 27-inch iMac. So, I'm watching The Maltese Falcon on TCM followed by The Thin Man. Wow, what a great country.

By the way, if you have cable television, and good wi-fi, you absolutely have to have the largest, newest Apple iPad available. It's impossible to articulate how incredible the experience is.

On another note, if I've said it once, I've said it a dozen times: Spectrum cable television is very expensive and I've tried ways to cut the cord and/or cut the cost, but it's impossible. But, if one takes advantage of what Spectrum has to offer, it's really worth the monthly subscription.

In August, I reported here on how Montgomery County, Maryland, was seeking to shut down private schools as part of their Covid-19 strategy of abolishing all risk by abolishing all freedom.

As more individuals have recently tested positive for Covid, the county government is responding with a new array of iron-fisted decrees. Some of the latest edicts make little or no sense, confirming the county’s nickname of LoCo Moco.

Gov. Larry Hogan blocked the county government’s effort to criminalize private teaching; Catholic, Jewish, and other schools have operated safely with no significant Covid outbreaks. But county schools remain shut down in large part due to the clout of the teachers union, a bulwark of political support for County Executive Marc Elrich.

These numbers were revealed during a County Board of Education meeting on December 3; a local activist captured screenshots of the disastrous test results. Some of the data was also reported in yesterday’s Washington Post. Shutting down public schools has done more harm to black students than anything since the end of local school segregation in 1961. 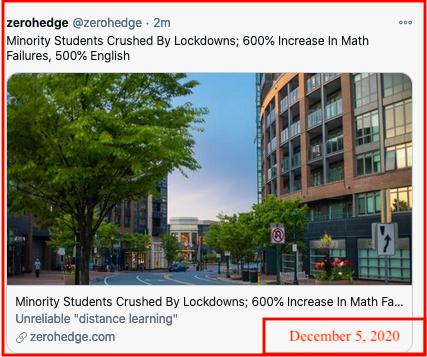 200% would be another doubling, I suppose.

I give up. From wiki:

So, I guess, a 600% increase means the number of students failing mathematics in this study is 7x as large.

Check: if ten students are failing now and originally there were five students failing, then 10/5 = 2. Subtracting 1 from 2 gets you 1. Add two zeros, and voila -- a 100% increase. And that checks.

What A Wonderful World, San Cooke
Posted by Bruce Oksol at 9:28 PM 2 comments:

Wow, wow, wow, I can't recall if I have posted this one before. I don't think so.

The Bakken never ceases to amaze me.

I track record IPs at this link.

The Nokota wells running in the opposite direction to the west of the Omaha Woman wells are similarly incredible wells.

An Old CLR Vardon Well In Siverston May Be Returning To Production? Still Listed As "Flowing" -- December 5, 2020

A large number of wells have been recently fracked. 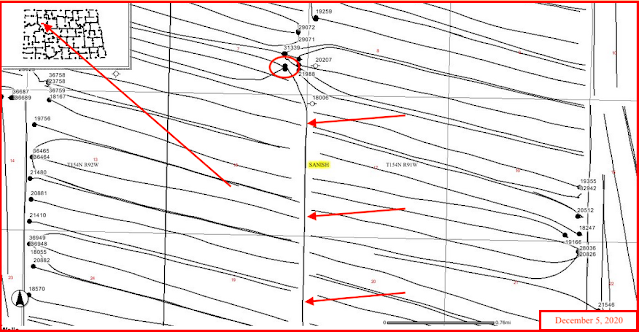 Note production profile; quite unusual for a Bakken well. So much for that dreaded Bakken decline: