Top international story of the week: it looks like Saudi Arabia is getting ready to monetize its assets. The stop story in the Bakken this past week might be the story on "cluster spacing." See below.

One Thing Leads To Another, And Soon, One Ends Up In A Place Totally Unexpected -- I'm Talking About Surfing The Net -- March 19, 2016

Later, 9: 05 p.m. Central Time: completely unrelated but after posting the stories below with emphasis on amount states are paying for education, my wife tells me that one of the local school districts is asking voters to approve a bond proposition for $220 million for a high school football stadium here in north Texas. Those voters suggesting $220 million is too much for a football stadium are a) new to Texas; and, b) have not seen Friday Night Lights, the movie about Odessa, TX, and the Permian High Panthers. Just saying.


Original Post
First, the graphs, from Ballotpedia (data from 2013 seems to be most recent available):

One article, from The StarTribune:


The ex­act num­bers of So­malis moving to Minnesota from oth­er states are hard to track. But there’s little doubt their ranks have swelled, too. The federal Office of Ref­u­gee Resettlement com­piles partial numbers showing about 2,620 total ref­u­gee ar­ri­vals from oth­er states in 2013, up from 1,835 two years earli­er — making Minnesota the state with the high­est in-mi­gra­tion by far.

“This has al­ways been an is­sue for Minnesota,” said Kim Dettmer of Lutheran So­cial Service, one of the ag­en­cies that helps re­set­tle refu­gees who come di­rect­ly to Minnesota. “We have in-mi­gra­tion. We don’t re­al­ly have out-migration.”

Af­ter ar­riv­ing from Kampala, U­gan­da, Ayan Ahmed and her nine chil­dren, ages 4 to 18, spent six months in Phoe­nix. There, Catholic Charities had lined up a fur­nished four-bed­room home for the fam­i­ly and a neu­rol­o­gist for Ahmed’s eld­est son, who is blind.

The article begins with a photograph with this caption:

And then the lede:


A week af­ter the Unit­ed States gov­ern­ment re­set­tled them in Con­nec­ti­cut this sum­mer, Nur Ali and his wife, Mahado Mo­ha­med, had de­cid­ed: They were mov­ing to Minnesota.

After a major dip in 2008, the year­ly num­bers of new So­ma­li refu­gees in Minnesota have re­bounded stead­i­ly. The num­ber of So­malis re­set­tled in the state has more than trip­led in four years. As resettlements nationally have picked up, more So­malis are also arriving here after brief stints in other states — often trading early support from resettlement agencies for the company of more fellow Somalis.

It looks like they're going to have to widen I-98. The west-bound lanes.
Posted by Bruce Oksol at 4:13 PM No comments:

Email ThisBlogThis!Share to TwitterShare to FacebookShare to Pinterest
Labels: Road_To_Little_Mogadishu

Meanwhile, back at the ranch ...

... Ms Jessie Veeder has the same problem that we had when Sophia was about a year old -- she learned how to inhale crumbs off the kitchen floor ...

Her dad solved that problem with a couple of internet clicks: he bought a Roomba. These are incredible. I can't imagine they work (well) on carpeting, but for wood and linoleum and tile floors they can't be beat.

And Roombas are so terrifying to a one-year-old learning to walk, that a toddler in a house with a Roomba will never get down on the floor again to inhale crumbs -- and besides, that's what God made dogs for.
Posted by Bruce Oksol at 2:14 PM No comments:

The other day I blogged about a James Fallows story in The Atlantic in which he provides "eleven signs that a city will succeed."

Number 11: they have craft breweries.

Apparently some folks in Glendive want their city to be on that list. According to The Dickinson Press, Glendive, MT, is getting a craft brewery.

Glendive is one of my favorite cities in the west. In the old days, to get to Williston, I would fly to Billings, and rent a car from there. My last stop before leaving civilization was Glendive, where I stopped at McDonald's, transitioning from I-94 to Montana State Highway 16, to the Bakken.

Family-owned brewery Cross Country Brewing is eyeing a mid-May opening at its East Allard Street location, where customers will be able to enjoy a variety of brother-brewed beers.

The brewery will be operated by Justin and Lonnie Cross; their two sons, Elliot and John; and their sons' wives, Jenay and Kathy.

John and Elliot share the brewing duties. The two took up brewing as a hobby more than half a decade ago. Opening day should have taps reserved for John's recipes — a brown ale and an American pale ale — and Elliot's recipes — an India pale ale and an Irish red.

Kathy, most likely, will be in the back, watching the books.
Posted by Bruce Oksol at 1:56 PM No comments:

The other day I blogged about Williston getting a special ops team. Today The Dickinson Press follows up with a story where all the "outlaws" will be housed once rounded up by the special ops team: in a $20 million expansion project for the current "jail." The lede:


Williams County commissioners and department heads decided to go ahead with a jail expansion after sorting out numbers and weighing needs against costs during a special meeting on Friday morning.

The project would expand the jail from 132 beds to 240 beds, and likely stop the need to transfer inmates to a facility in Hardin, MT.

Some data points (some numbers rounded, and thus differ slightly from the linked story):
That adds up to $54.5 million.

The combined price tag is $54.9 million, an amount that could increase if the two expansions were done separately, said Jim Steinmann, a project manager for Williams County.

Williston may need a special ops team just to respond to any jailhouse breakout.

You know, this is pretty cool. If the jail, at some point, has excess capacity, it could be a revenue-generator, perhaps taking Gitmo prisoners if that facility is shut down.
Posted by Bruce Oksol at 1:23 PM No comments:

I track Ivanpah here.  Just to be clear: Ivanpah is a money-laundering scheme disguised as a science project.

There seems to be an old story about this solar plant making the rounds now. PJ Media is reporting the story with the headline that the plant is producing only one-half what it promised, and has a number of other problems also. In fact, this story has been around since at least November, 2014.

I'm not sure exactly what is new in the article, except perhaps two things which I will touch on farther/further down.

First, some background from wiki:


The Ivanpah Solar Electric Generating System is a concentrated solar thermal plant in the California Mojave Desert, 40 miles southwest of Las Vegas, with a gross capacity of 392 megawatts.

The facility formally opened on February 13, 2014, and it is currently the world's largest solar thermal power station.

The project was developed by BrightSource Energy and Bechtel.

It cost $2.2 billion; the largest investor in the project is NRG Energy, a power generating company based in Princeton, New Jersey, that has contributed $300 million. Google has contributed $168 million; the U.S. government provided a $1.6 billion loan guarantee.

In 2010, the project was scaled back from the original 440 MW design, to avoid building on the habitat of the desert tortoise.

In November 2014, Associated Press reported that the plant was producing only "about half of its expected annual output".

The California Energy Commission issued a statement blaming this on "clouds, jet contrails and weather".

However, in the first quarter of 2015, Ivanpah generation was up 170 percent over the same quarter in 2014 – 108 gigawatt-hours compared to 40 GWh, according to the Energy Information Administration.

With regard to solar efficiency, wiki goes on:


The plant requires burning natural gas each morning to get the plant started.

The Wall Street Journal reported: "Instead of ramping up the plant each day before sunrise by burning one hour’s worth of natural gas to generate steam, Ivanpah needs more than four times that much."

In 2014, the plant burned 867,740 million BTU of natural gas emitting 46,084 metric tons of carbon dioxide, which is nearly twice the pollution threshold at which power plants and factories in California are required to participate in the state’s cap and trade program to reduce carbon emissions.

If that gas had been used in a conventional fossil fuel plant, it would have generated nearly 124,000 MWh of electrical energy. That is enough to power the annual needs of 20,660 Southern California homes.

Ivanpah used that gas plus solar energy to produce 524,000 MWh of electrical energy (more than four times that of the referenced conventional plant), all while operating at well below its expected output.


A solar power plant in California, built with a $1.6 billion taxpayer guaranteed loan, is in danger of being shut down entirely because it is producing only a fraction of the energy that the owners promised. The plant only generated 45 percent of expected power in 2014 and only 68 percent in 2015, according to government data.

What's more, it is producing electricity at a cost of $200 per megawatt hour - six times the cost of electricity produced by a natural gas fired plant.

These disappointing results at high prices could be the solar plant’s undoing. California Energy Commission regulators hoped the plant would help the state get 33 percent of its electricity from green sources, but now the plant could be shut down for not meeting its production promises.

The most interesting figure is the $200/MWH -- one can learn about LCOE here.

I don't know if this is simply re-cycled old news or something new, with perhaps one exception, the 2015 figure of "68%." The author doesn't provide any dates or any new "ultimatums" from the regulator regarding a potential shutdown.

My hunch is it's re-cycled news.

Having said that, going from 45% to almost 70% in one year is not bad; someone is paying attention.

California to shut down the world's largest solar farm won't be done "lightly." 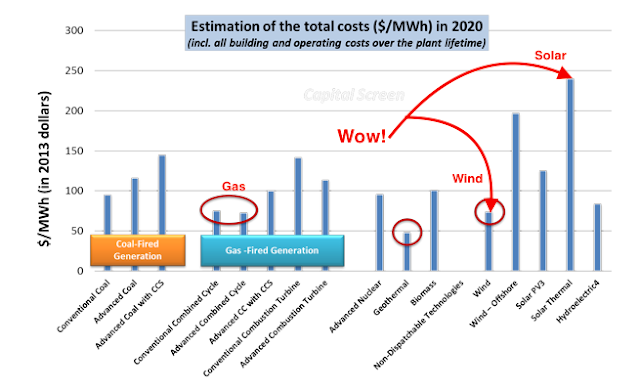