A real nice way to start the day. No yard light -- it's a good place to be (link here):

As predicted: US shale oil output in May (next month) is predicted to rise the most in over two years -- Reuters.

Pipeline: Blackstone to buy Permian Basin pipelines for $2 billion -- Bloomberg. Data points:
Iran boosts gas-output capacity with new projects at giant field -- Bloomberg. Data points:
UnitedHealth's earning beat on higher revenues. Getting the best of both worlds: raise premiums due to cost of ObamaCare and then getting out of ObamaCare? Earnings per share of $2.37 easily beat forecasts of $2.18.


The GDPNow model forecast for real GDP growth (seasonally adjusted annual rate) in the first quarter of 2017 is 0.5 percent on April 18, unchanged from April 14.

The forecast for first-quarter real residential investment growth inched up from 12.0 percent to 12.4 percent after this morning's new residential construction report from the U.S. Census Bureau.

The forecast of the contribution of inventory investment to first-quarter growth declined from −0.71 percentage points to −0.76 percentage points after this morning's industrial production release from the Federal Reserve Board of Governors.

From: What Went Wrong: The Clash Between Islam and Modernity in the Middle East, by Bernard Lewis, c. 2002, one of the best books ever written on Islam.

The author suggests that secularism may not survive anywhere in the Middle East.


“Of those Middle Eastern states that have written constitutions, only two have no established religion. One is Lebanon, no longer an encouraging example of religious tolerance or secularization. The other, as already noted, is the Turkish Republic, where, while the general principle of separation is maintained, there has been some erosion. The ex-Soviet republics are still struggling with these problems.” – p. 108.

Turkey has turned away from Ataturk's vision of Westernization and mordernization (two different things). Turkey may actually return to sharia law in my lifetime.

This was a big deal. The international teams from all over the world; huge European presence. Australia was represented. Foreign countries only brought their teams with players age 13 and over.
Our granddaughter's team is for 11-year-olds; she is ten years old, playing "up." Although they did not win against the older foreign teams, they more than held their own. It was general consensus that they were a better team than a 15-year-old team from Mexico. The two teams could not play an official game (due to age-specific competition) but in a friendly game they held the score to 1 - 1. 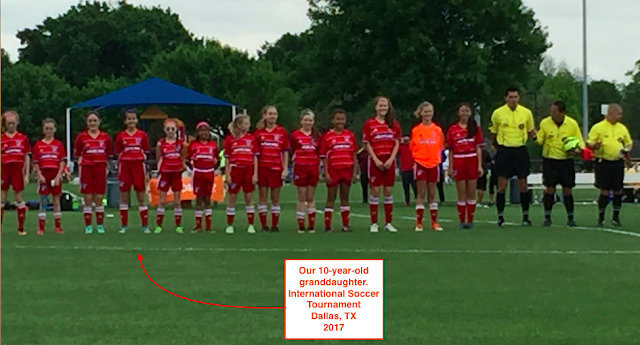 A Look At Soaring Sand Costs And Water-Disposal Expenses -- April 18, 2017


A typical shale well in the Permian now has a two-mile lateral (10,000-plus linear feet) and uses 15 million pounds of sand—that’s 1,500 pounds of sand per linear foot. We’ve been hearing that using 2,000 pounds of sand per linear foot is becoming more common in the Permian. Consider that for a moment; that’s like forcing a pickup-load of sand through perforations in a section of pipe the size of a two-liter bottle of Coke! And even greater use of proppant is a real possibility. In October 2016 Chesapeake Energy set a record by pumping more than 5,000 pounds of sand out of each linear foot of a 10,000-linear-foot lateral in a Louisiana well—and increased the well’s output by 70% over what would have been achieved through traditional sand use.

Amazing. Analysts bullish with $70-oil by year-end -- Rigzone.  Raymond James sill predicting that a 1-million-bopd drop in oil production will drive prices up. I still look at the huge amount of oil stored around the world.
Posted by Bruce Oksol at 7:50 AM No comments: