Clinton still isn't accepting "the legitimacy of the election," as she put it. And why should she, when she knows that more than 200,000 undisclosed individuals in Wisconsin were prevented from voting — they must be the cousins of all those illegal immigrants who, according to Trump, pulled the lever for her in New Hampshire — and that every single one of them supported her? Why, if you believe that miscellaneous "Russians" — at one point she referred to a generic character named "Igor," which is funny if your level of engagement with Russian culture does not extend far beyond Rocky and Bullwinkle horizons — bought Twitter ads in the hope of targeting 60- and 70-something union retirees in Macomb County, Michigan, would you not think you really won? [Continues below the video.]

It's not just voter suppression in a state where Trump couldn't even beat Sen. Ted Cruz in the GOP primary that Boris and Natasha spoiled Clinton's victory. She also insisted that James Comey — who has apparently gone from being the sensible public servant who refused to recommend charges over the handling of her "damned emails" to the villain of the October press conference to the selfless note-taking hero of the Russia investigation to being an election-rigging monster again — did her in with unnamed female suburban voters who would otherwise have sworn her allegiance as a matter of course.

But what she thinks really sealed her fate with undecided voters was a conspiracy theory surrounding child molestation and human sacrifice and the Illuminati at Comet Ping Pong, a pizza parlor in Washington, D.C. Call me crazy, but I think that anyone willing to believe on the basis of a Reddit thread that one of your chief pleasures in life is sitting down with your friends to eat yeasted flatbread made from the corpses of kidnapped rape victims in the basement of a D.C. restaurant has probably already made up his mind about you one way or the other. [Continues below the video.]

But anyway, Clinton intoned in Michigan, the Electoral College should be abolished. After all, we are in the midst of a "new Cold War," she warned, reminding all four of us who did not applaud enthusiastically why the prospect of a Clinton presidency was always terrifying. WikiLeaks, she said, "is a wholly owned subsidiary of Russian intelligence," which may or may not be true. If so, maybe she should ask President Obama to explain his decision to commute the sentence of that noted Putinist hardliner Chelsea Manning.

Even the perfect storm of phantom missing voters, Igor's premium Twitter ads, Comey's partisan treachery, obviously credible-sounding rumors about victims of ritual slaughter disguised as pepperoni, and the wholly unexpected advent of the pesky Electoral College in the midst of Cold War II is not exhaustive of the reasons why Clinton believes she really should be sitting in the White House right now. It's also the left's fault, you see.

And that's just a small piece of the essay.


According to the National Weather Service in Duluth, Minnesota, Duluth received 10.6 inches of snow on Friday; the highest single day snowfall accumulation for any city in Minnesota – on any day in October. 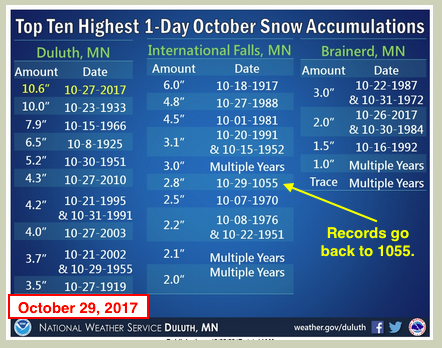 Meanwhile, I'm looking for a table for the "English pub" we envision out at the Flathead Lake home. 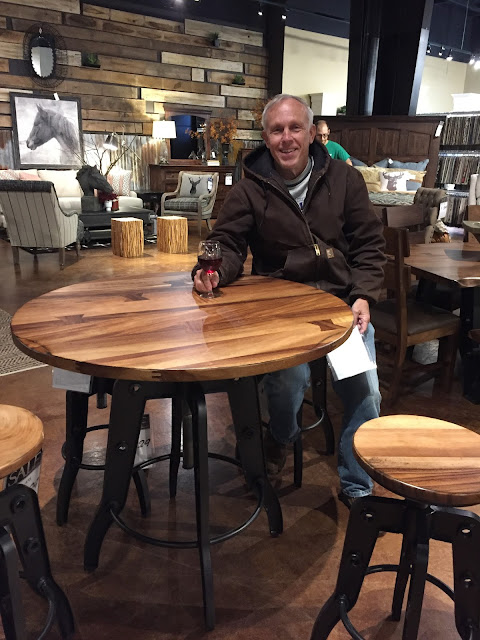 Production hell, November 4, 2017: from Bloomberg. I assume the link will eventually break; that's too bad. Anyone who buys shares in TSLA after reading this article has nerves of steel.

Tax credit. November 4, 2017. Some folks thought that talk of eliminating the US tax credit for EVs was the reason Tesla tanked. Hardly. It was everything but the tax credit talk that tanked Tesla. Tesla will soon lose the tax credit anyway, having reached the sales threshold.

Will need capital raise within 90 days, contributor to SeekingAlpha, November 3, 2017.

Tesla Chief Executive Elon Musk has outlined ambitious plans to expand its network of factories and service facilities, including potentially an assembly plant in China and up to three more electric battery Gigafactories. He told investors in July the company could sell more shares to fund that expansion. "I'm sure there will be some funding rounds that happen in the future," he said.


Tesla, by comparison to its legacy rivals, is market value rich, and cash poor. It had $3 billion in cash on hand at the end of the second quarter, and some analysts predict the automaker will have to raise more to cover the expected cash drain from the slow launch of the Model 3, which is lower priced than other Teslas and aimed at the market for $35,000 to $45,000 cars.


The bank said that investors are underestimating the risk of Tesla not being able to solve its production problems. If the Model 3 is simply harder to manufacture than Tesla predicted, it could mean lower delivery numbers and potentially higher prices for the new car. Both of these problems would put dents in the "mass-market" branding of the Model 3. JPMorgan lowered its production forecasts for the Model 3 to 15,000 in the fourth quarter, half of its previous forecast.

Miscellaneous Notes; Nothing About The Bakken -- October 29, 2017

Wow, this is cool. Today on the way home, just past Texas Motor Speedway, from Denton where our older granddaughter had participated in a water polo tournament, we passed a) a burning car; and, b) a sign that said said Tanger Outlets were open. I didn't know it was such a big deal but over on Google Finance  it was one of the top ten national stories. Here's a link to the story:


The long-awaited Tanger Outlets Fort Worth is scheduled to open Friday morning on the city’s far northern edge, just south of Texas Motor Speedway. The outlet mall features more than 70 stores representing some of the best-known brands of shoes, shirts, children’s clothing, jewelry, makeup and many other retail items.

I'm not interested in any of them. Outlet stores are over-rated. One can get a better deal with the same "celebrity" articles at Marshall's. We were just at Marshall's yesterday and could have bought a Michael Kors purse -- retail, $349, for $79. At $79, it was still about $39 too expensive.

I haven't seen them in awhile, so maybe things have changed. But I remember, in the "old days," that once a year, a group of six to ten people with hand-held bar scanners would descend on a store (retail, grocery, pharmacy) and take inventory of everything on the shelves, for tax purposes. I don't know if that's still required; seems fairly archaic. But if it is still being done, it looks like Walmart might be trying out something new.

Robots will soon help stock shelves at about 50 Walmart stores.

The two-foot tall robots are fitted with cameras to scan aisles and check stock, identifying missing, misplaced, mislabeled and mispriced items. The robots will give that information to employees who will fix the issues.

This obviously would work for taking inventory.


A pyramid scheme that lands employees in “financial ruin” – those are the serious allegations in a lawsuit filed against LuLaRoe, a clothing company staffed with 80,000 distributors.

The California-based company amassed over $1 billion in sales in 2016 and recruits many employees that happen to be millennial mothers.

The company said its sales from January through October of this year have surpassed $2 billion.

The company was founded in 2012 and is known for the brightly colored leggings that many sellers splash across Facebook pages, looking to entice buyers and make a profit – or at least break even – from their initial investment to get started as a distributor.

Bringing It All Together -- LIberty Resources North Of Williston -- October 29, 2017 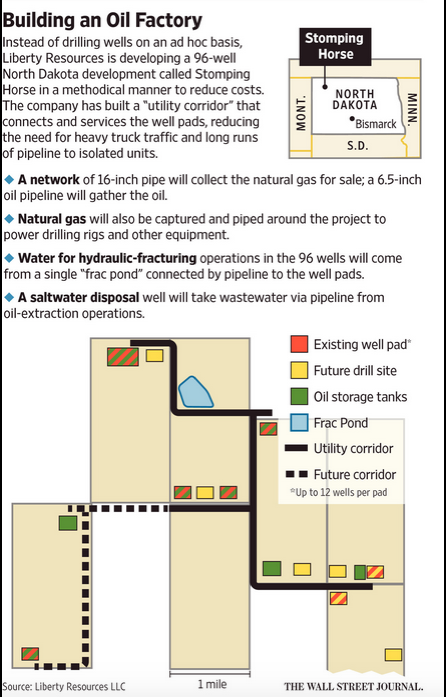 So, who is this "Liberty Resources"? From the "Bakken Operators" page:


CLR's Holstein wells have been updated: they are tracked here. Incredible wells; most have just come off SI/NC. But the production of some of the older wells is what impressed me.

Saudi: take note of this "dreaded Bakken decline" in this "old CLR Holstein well (2.5 years old and this well will produce oil for 30 years -- and many re-fracks); see Filloon graphic at bottom of this post:
Monthly Production Data: