This may be the best story I've seen in a long, long time.

A huge thanks to the reader who sent me this. This is really "good" on so many levels.

Something tells me this idea may work for moving some of the equipment that is being moved on "sleds" out on the oil well pads.

The Wall is being built: the Obama Wall. Good fences make good neighbors. I guess "open borders" are good as long as they are in Texas.

Fox News ratings soar as Tucker Carlson takes over for Megyn. Don't you just love seeing "soar," "ratings," and Fox News all in one sentence."

UnitedHealthcare 4Q16 EPS surge 64%on increased enrollment. Does the GOP really want to scrap ObamaCare? Once the big insurers figure out ObamaCare ... oh, that's right ... wasn't United Healthcare one of the first to start scrapping ObamaCare. Can't remember. Need to check, but I think I'm right.

George Michael killed by "crack cocaine." Did anyone not already suspect that?

Some folks are upset that some of Trump's cabinet nominees have limited government experience. Wasn't this the extent of the current POTUS' government resume: "junior senator from Illinois; one term." Can't remember. Need to check, but I think I'm correct. If not, not far off.

Seven years, 363 days into Obama's presidency: the "Fed" gives the US economy a "clean bill of health." Okay to start raising rates. Fast and furious.
Posted by Bruce Oksol at 8:59 PM No comments:

This is really, really, cool. I will get back to it later. for now, Reuters is reporting that "Netflix blows past international subscriber estimates; smashes expectations; shares spike.

Disclaimer: this is not an investment site. This is being posted simply because of how I first started following this company. It was the first company I mentioned over at "The Next Big Thing," first posted March 21, 2013. I never bought shares in Netflix, and never plan to.  I just think it's interesting.

It's fun to go back and read that entire note, the original post and some of the updates.
Posted by Bruce Oksol at 3:53 PM No comments:

I'm posting this to simply jog my memory of what's been going on around the Ray, ND, area.

Tioga, the "oil capital" of North Dakota is located about ten miles to the east-north-east.

Also, the oldest active well in North Dakota is in this region:
The Clarence Iverson "discovery" well is located about eight (8) miles south of Tioga. I discussed it, with links, at this post. I see that some of the links are broken; I will try to fix them later. It is located just south of #35. 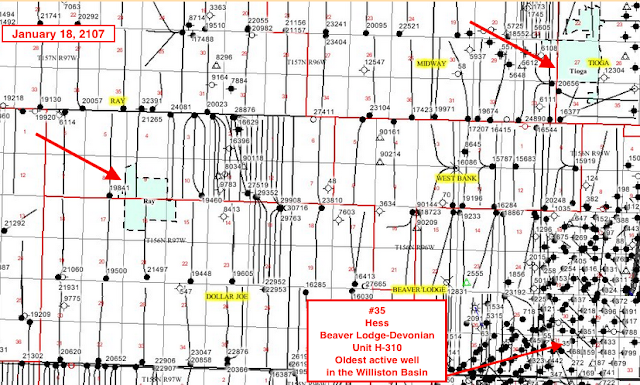 Posted by Bruce Oksol at 1:54 PM No comments:


Comments regarding a renewed permit:

May 28, 2020: not sure whether it was an executive order or not but President Trump says the US will "quit" the WHO in light of the corona virus fiasco and the close ties between China and the WHO.


April 25, 2020: halts immigration during Wuhan flu with 30 million Americans out of work.

April 3, 2017, T+72: the US will end UN funding for the UN Population Fund. Trump reinstated the so-called Mexico City Policy that withholds US funding for international organizations that perform abortions or provide information about abortion.

Thursday, January 26, 2017: none. He had said he would sign an EO on voter fraud, but late in the day it was reported he will "delay" signing that EO.

Tuesday, January 24, 2017, announced, I haven't see the specifics yet, will affect:
Monday, January 23, 2017, first full day of work in the White House:
Friday, January 20, 2017, inauguration day: two EOs. I already forget the first one; the second one, some bizarre anti-ObamaCare EO, which no one will be able to understand. My hunch is it could lead to a lot of mischief. No problem: a new EO. [Later: here it is, his first EO over at USA Today: -- almost as bizarre as the second EO -- it will block an Obama administration policy change that would have reduced the cost of mortgages for millions of home buyers.

Much, much more at the link.]

Thursday, January 19, 2017: It begins this Friday, immediately following his inauguration. Just think, at least 60 US Democratic congressmen and senators are going to miss this historic event. Cupcakes. Snowflakes. The good news: more room for Trumpers to be there.
Posted by Bruce Oksol at 12:38 PM No comments:

January 19, 2017: wow, talk about a country in disarray -- now the Saudi energy minister suggests there may be need for another production cut in 2017.

Later, 3:42 p.m. Central Time: be sure to read the first comment about Saudi's seasonal production before reading the original post.

We didn't get a chance to discuss the announcement that the Saudis recently made, from Bloomberg:
The original goal: to reduce global inventory by about 1.8 million bbls / day.

There are indications that some OPEC, and some non-OPEC countries, are cutting even more than agreed (not necessarily because they actually wanted to).

1. If we take this at face value, it suggests the energy minister is simply looking at summer driving gasoline demand in the US:


1a. See the crack cocaine analogy at this post.

1b. If that is accurate, it suggests the energy minister feels the US shale industry can't meet the summer driving demand. The EIA seems to suggest otherwise (link to follow, if I remember). In January, 2017, US crude oil production rose slightly more than 40,000 bopd, month-over-month; the EIA projects a 71,000 bopd increase in February. I assume they mean 71,000 bbls over the previous month's rise of 41,000 bopd but I could be wrong. But if so, that represents about a 110,000-bbl increase, during the winter, and in the very early days of increased production.

[Added later, see first comment: 1c. By the way, the energy minister's comments are very disingenuous. In fact, Saudi will have to increase production in July/August to meet its own domestic requirements for air conditioning. See first comment; I had completely forgotten. Throwing that into the equation may make this entire exercise/this entire note moot. The Saudi energy minister may simply be saying that in July, to meet its own domestic needs, Saudi, will, of course, increase production. Well, duh.]

2.  The Saudis maintain they have a dual mandate when it comes to oil: a) their own interests; and, b) global interests: smoothing the global supply/demand curve. The energy minister is speaking to the second mandate.

2b. The negotiated OPEC cut is to last for six months, taking us through the month of June. By the first of July, the US driving season is well on its way; by July there will be a 30-day gasoline supply in the US.

2c. Some (including Bloomberg) argue that going back to the way things were in July, 2017, will be a bit soon, probably way too soon.

Bottom line: why did the energy minister make this statement at this time? I think it was for these two reasons:


3. It was a message to US shale companies -- moderate your CAPEX. If you want to take advantage of OPEC's decision to cut back, OPEC can return with a vengeance; we can flood the markets again.

4. It was a message to other OPEC countries: don't cheat. This will all work out fine if everyone stays the course. And if you cheat, Saudi can make it really, really rough on you again as soon as this summer.

Regardless, it was wishful thinking.


5. Ninety percent (90%) of Saudi Arabia's revenue comes from oil. Their 2017 budget is said to be based on $80-oil (wink-wink). At $50 oil, they simply can't make it. They are on track to hitting an all-time low in foreign reserve assets in about nine (9) months (that is this year), and, although it's hard to believe, Breitbart had a story some time ago (linked earlier at the blog) that at the current rate of decline, Saudi's foreign reserve fund could be depleted in as little as four years.

On top of that, the IMF has estimated that Saudi's GDP growth, at 0.4% this year, will be essentially flat.

This country is in dire straits.

Meanwhile, the price of WTI continues to fall, now down to $51.53 or thereabouts.

Shortly after the above was posted,  Platts  posted a note:
To me, this looks like a lot of smoke, and not a whole lot of fire:
I guess one can come up with any number one wants.

And, then of course, we have all that oil sloshing around in tankers and pipelines from Timbuktu to Toronto.
Posted by Bruce Oksol at 11:43 AM No comments:

February 24, 2018: in the graphic below, the change in miles driven is "against" the left-hand x-axis, from -4% to +6%. The graph appears to go through the end of 2016. Gartman, a frequent commentator on CNBC said that Uber was the top threat to oil. Apparently, Uber is not a threat yet. Whether or not the increase of miles driven impresses anyone, US "gasoline demand" set more records in 2017 (will be posted later).

How did miles driven for 2017 in the US stack up compared to previous years. Link at Federal Highway Administration. 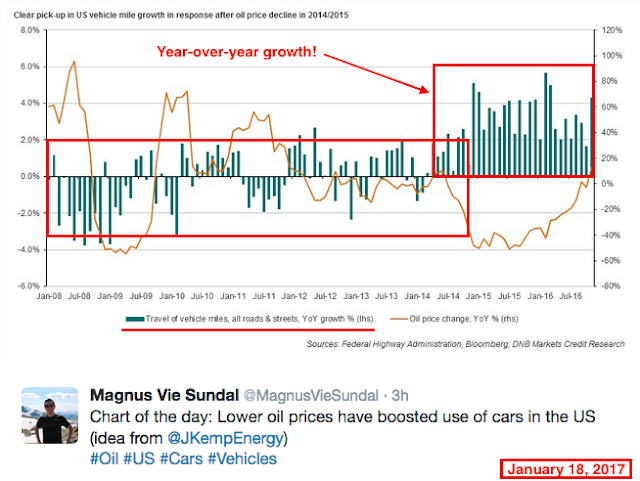 Some important data points about the graphic:

This is not our Sophia, but it certainly could be. Sophia knows my laptop keyboard well enough to watch Princess Sophia videos on YouTube -- volume, selecting new episodes, pausing, playing, dimming, brighten; etc:

The other day I asked whether PEOTUS Trump was riding the wave, or if he was making a wave.

Today, NBC News is suggesting that PEOTUS is simply riding the wave: GM's $1 billion investment was not driven by Trump and likely dated back to 2014.


But several GM officials stressed that the latest moves were in the works for months and, in some cases several years, and were not a reaction to criticism by president-elect Donald Trump who, earlier this month, had threatened to impose "a big border tax" on GM for importing the hatchback version of its compact Chevrolet Cruze model from Mexico.

During an appearance at the North American International Auto Show in Detroit last week, GM Chairman and CEO Mary Barra said the automaker would not alter its global manufacturing strategy to comply with political pressure, and GM General Counsel Craig Glidden this week echoed the position in an interview with the Wall Street Journal.


#18 in the 20-song countdown and the 20 songs that will be played continuously over the 3-day celebration.


Time To Say Goodby, Sarah Brightman & Andrea Bocelli
Posted by Bruce Oksol at 9:34 AM No comments: