Posted by Bruce Oksol at 6:34 PM No comments:

Resident Biden has apparently reached out to Saudi Arabia and Kuwait to release / produce / export more crude oil for the United States. Not confirmed. But the real question is whether OPEC can actually do that even if it wanted. Let's go Brandon! 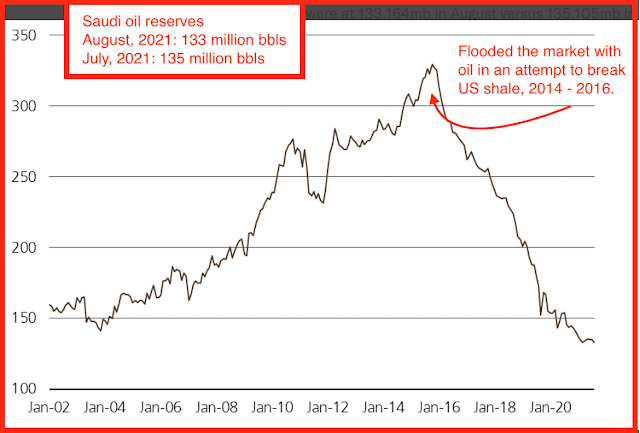 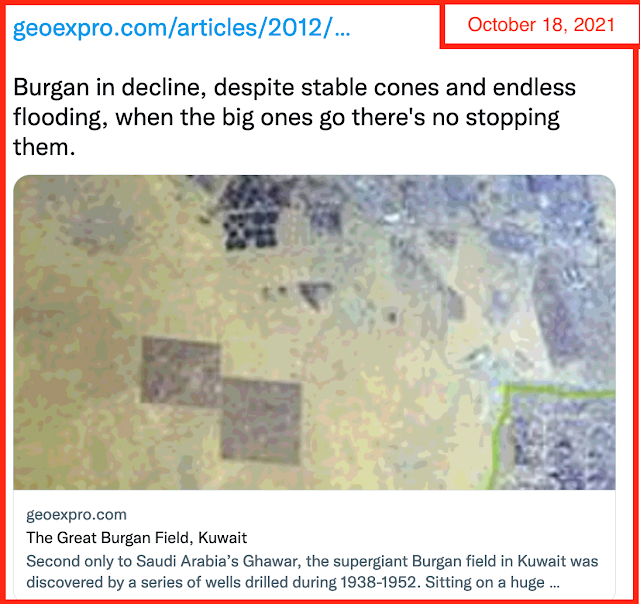 Those who said oil would trend higher today -- 82% of respondents -- were correct.

Next poll: number of active rigs in the Bakken next August, 2022.

Say what? Germany depends on Russia for its natural gas supply and Germans want more natural gas from Russia, less obstacles, but not through Nord Stream 2. The North Stream 2 pipeline cannot be approved because of the EU Gas Directive. Link here.

Interestingly, Novak also said there is no actual gas shortage in Europe despite lower than normal storage facility fill rates.

This was echoed by German energy minister Peter Almeier, who said that gas storage in the country was 75 percent full and that Germany was not dependent on Russia for its gas supply.

Posted by Bruce Oksol at 4:18 PM No comments:

I have "never" seen AAPL go up in price during or following a "special Apple event," of which there are generally two each year.

Apple has held two special events in less than a month.

Star-gazing: I honestly did not know star-gazing in the autumn was a thing. From The WSJ:

Where to Go Stargazing, Whether Your Budget Is $95 or $95,000 This fall is high time to get starry-eyed. Five astronomy-focused getaways, from a low-key adventure in North Carolina’s Outer Banks to a ‘Sky’s the Limit’ package in California’s Wine Country

That caught me by surprise, the coincidence, because Sophia and I have been having a ball looking at the heavens  the past few evenings. The skies have been so clear, and with the "star-gazing" app on the iPhone -- wow, what a great time.

The best star-gazing nights I have ever enjoyed, northern England, just this side of the Scottish border, from August to November, some years ago.

Slim Chickens: my wife and I each had a chicken sandwich tonight at Slim Chickens just on the other side of DFW. First time we had visited. Very, very nice. She had the regular crispy; I had the cayenne.

Bacon: the poster child for inflation. Why? For several reasons, not least of which, California wants to ban bacon, or at least make it prohibitively expensive.

I always argue that simply looking at the cost of something does not even begin to tell the whole story.

So, same with bacon. No matter how expensive bacon gets, a vegan probably won't notice.

I love bacon but have never eaten much -- health and weight issues. But several years ago, I went even further, cutting my intake from three slices of bacon to one slice of bacon when I did have bacon which was not particularly often. A 12-ounce package of bacon sometimes goes "bad" in my refrigerator before I get around to using it all.

An aside: often when frying one slice of bacon, I offer half to my wife and she gladly accepts. And I eat even less.

But now, I've gone a step further. I don't buy bacon at all. At least not recently. I've replaced it with Spam. And the amount of Spam I eat at any one sitting is actually less than one slice of bacon.

It's important to note this has nothing to do with price. I could care / couldn't care less about the cost of bacon. I eat so little, the cost is negligible in my total monthly expenditures. I eat less bacon simply due to health reasons.

So, I haven't had time to actually compare, but I think my one can of Spam used in place of bacon will last at least twice as long as a typical package of bacon (from ten to sixteen ounces).

Just in her imagination! LOL. Actually on Grapevine Lake, TX, a few miles northwest of DFW airport, but with a feeling of being on a different continent. 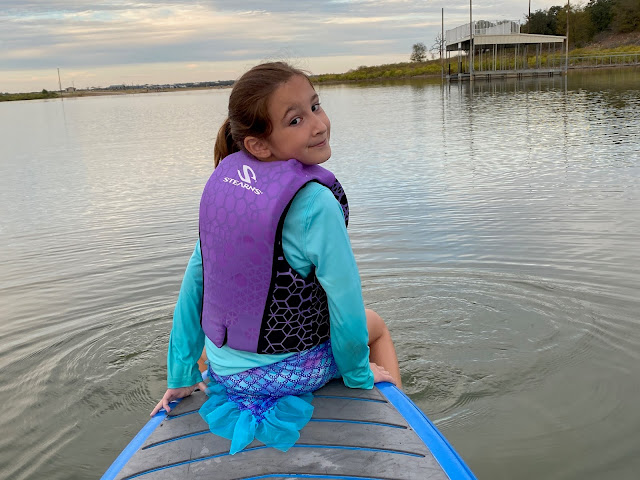 Crude oil: up for third day in a row. Highest in seven years.

Flashback: Huffington Post trying to reassure folks that killing the Keystone XL won't result in more CBR. Originally posted November 9, 2016. Link here. Unless I missed it, the writer conveniently ignored DAPL. From wiki, a reminder of the timeline:

The $3.78 billion project was announced to the public in June 2014, and informational hearings for landowners took place between August 2014 and January 2015. Dakota Access, LLC, controlled by Energy Transfer Partners, started constructing the pipeline in June 2016.

Crude exports by rail: see for yourself. Link here.

Zillow under pressure. "Absolutely hilarious. Large scale automated house flipping isn't a good idea??? I've been saying this for a while, but I sure $OPEN has cracked the code.... Also jacking up house prices for average Americans is just a terrible idea societally." / Twitter. Link here.

Netflix has said it intends to spend $17 billion to produce content in 2021. While reports in 2017 said Apple was spending just $1 billion on its initial slate of original content, by 2019 the tech giant had reportedly increased its original content budget to $6 billion to compete with the bigger streaming giants.

OPEC: Bloomberg Energy on Twitter: "OPEC and its allies once again fail to pump enough oil to meet their output targets, exacerbating the supply deficit supply as the world recovers from the coronavirus pandemic https://t.co/E5Y3ZNzwxn" / Twitter. Link here. This is even more interesting given the fact that Brent is trading around $85. Also here, whoops.

Lighter grade crudes, such as US West Texas Intermediate, Nigeria's Akpo and Kazakhstan's CPC Blend have been in demand among Indian refiners as they have tried to maximize production of in-demand gasoline, which as come at the cost of reduction in purchases of some heavier Middle Eastern crudes, analysts said.

Kang Wu, head of global oil demand and Asia analytics at Platts, said India's mobility index continued to improve from 172% in September to over 200% at the start of October with the easing of pandemic movement restriction measures.

"Indian refiners are looking to adjust their crude oil import mix in favor of sweeter and lighter grades that can be refined to maximize production of light distillates, to feed increased production of gasoline needed to meet the recent surge in demand for the fuel," Kapoor added.

Putin: tea leaves suggests Russia not providing that extra natural gas to Europe as "promised." If anything, extra Russian gas going to Asia. From twitter:

"🚨No gas for you🚨 No evidence of an increase in Russian gas supplies to Europe next month in today’s keenly awaited pipeline capacity auctions, despite hints from Putin and friends in recent weeks. European gas prices jump almost 18% https://t.co/YcAjHeRSug" / Twitter.

Colin Powell: wow. CNBC is focusing on the "breakthrough death." They are trying very, very hard to convince listeners this was rare, very unusual for a Covid death in a person fully vaccinated. It's almost embarrassing. Embarrassing because they don't seem to know the statistics. There have been a lot of fully vaccinated deaths. Joe Kernan talking with governor Chris Sununu of New Hampshire (R).

If the ongoing global energy crunch is teaching us anything, it’s that decarbonizing the world’s economy may be even more difficult than many had figured. While a strong case can be made for reducing — or even slashing — greenhouse gas (GHG) emissions by shifting to low-carbon and no-carbon energy sources, the sheer magnitude of the undertaking means there are likely to be major setbacks and compromises along the way. Setbacks like having to turn to coal-fired generation this winter to help keep parts of the Northern Hemisphere warm and productive, and compromises like acknowledging that sometimes the wind doesn’t blow, the sun doesn’t shine, and utilities need to burn a lot more natural gas to make up the difference — assuming there’s enough gas around to burn, that is. One more takeaway from current events is that energy security in the form of being able to count on your counterparties is a pretty big deal. (We’re looking at you, Vladimir Putin.) With all that in mind, in today’s RBN blog, we examine the long-term outlook for energy and GHG emissions as the United Nations’ climate change conference in Glasgow, Scotland, looms on the horizon.

You could say that how all this plays out is anyone’s guess. And by “this” we could be referring to either the energy supply/demand situation this winter in the northern half of the globe or the prospects for meeting the mid-century goals for decarbonization set by the U.S. and other participants in the Paris Agreement nearly six years ago. Short supply and soaring energy prices, for natural gas in particular, are likely to lead to a lot more coal being burned in green-as-can-be Western Europe this heating season. It’s a hard pill to swallow, and a dose of harsh reality — there’s simply not enough gas around to ensure that everyone there can stay warm and still meet the area’s energy needs, especially if it’s an unusually cold winter or if the region’s wind farms and other renewable energy sources continue to be erratic producers.

Those issues, along with the social impact of higher commodity prices on still-recovering and vulnerable populations are sure to be hot topics at the aforementioned UN Climate Change Conference (COP 26). After Paris, the world seemed to say, “We need to make a change and invest in the future.” The key question this time around will be “How long?” How long will the current energy crisis last? How long will demand for hydrocarbon-based energy continue to hold up (or expand) before demand starts to decline? How long will it be until low- or no-carbon technologies can reliably satisfy demand for energy and all the other things hydrocarbons are used for? And this: How long before the effects of too-high GHG emissions lead to catastrophe?