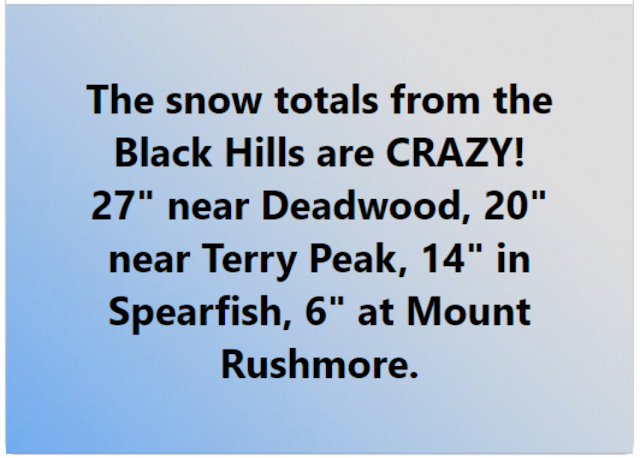 Two of the three wells have dual parallel laterals, drilled about a year apart from each other;

These wells, on a three-well pad, are interesting in their own right and will be updated elsewhere.

In the process of updating the two wells below, I ran across these wells, #35898, #35897, and #35896. Those wells on a three-well pad, are interesting in their own right and will be updated elsewhere.

Buy now, pay later: for those who have forgotten --

Afterpay is best known for its "pay later" service that allows in-store and online customers to purchase a product immediately and pay for it later with four equal repayments. The repayments are interest-free, but if they are not paid every two weeks as required, late fees are accrued.

Firestone has provided this service for years (decades?). Firestone "credit card" new expenses are interest free for six months but start accruing interest responsibilities after that. But doing this across the board, like Afterpay, is pretty clever.

One producing well (a DUC) was reported as completed today:

Flaring solutions in the Bakken, catalysts:

Link to The Williston Herald. Archived.

Anybody who believes that the Biden administration is truly concerned about high gasoline prices is being played.

One doesn't need internal polling to show Americans are deeply concerned about price of gasoline and inflation.

Right now, if Americans are placing the blame on anyone, it's Resident Biden -- based on his low polling. Right, wrong, or indifferent the Biden administration knows they need to get that monkey off their collective back and onto someone's else back.

Trump is out of the picture (sort of) so the administration needs to look for another scapegoat.

From the link above: 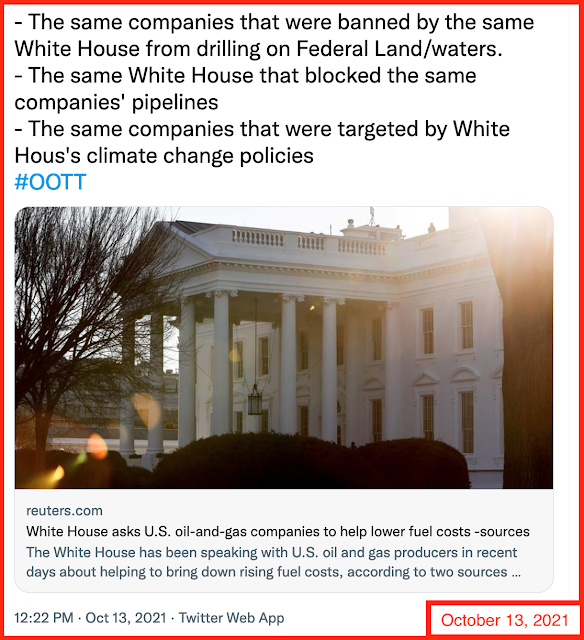 If "I" were Big Oil, my opening gambit:

First of all, the "global energy crisis" is not global. It is a crisis for the UK, Europe, and Asia. There is no energy crisis in the US and there will not be.

The cause of the 2021 UK, European, Asian energy crisis all leads back to coal.

Once one accepts that, everything else fits.

This has been added as a "big story" at The Big Stories linked at the sidebar at the right.

The perception by some:

The 30-second elevator speech, in one word:

But, what precipitated inadequate coal?

Pushback: the pushback I will get on this -- "well this is obvious. There's nothing new here. Everyone knows it goes back to coal (and nuclear energy." My response: if it's so obvious: why did it happen? Okay, better, if it's so obvious why are there so few articles being written about this -- the "coal angle"?

In the first graphic, note the "area under the curve." Huge coal export deficit had developed by 2016. 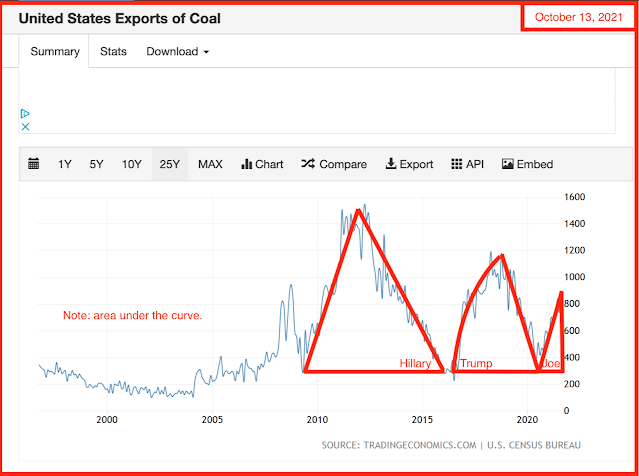 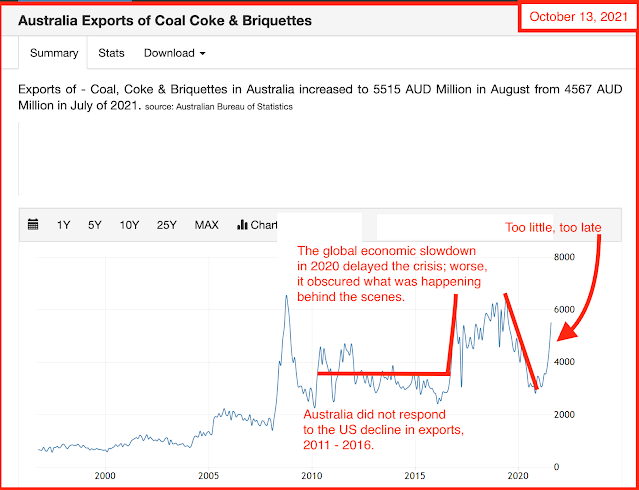 Wind: "wind is not blowing" is a bunch of malarkey. A study shows that the impact of lack of wind on gas deficit has been limited. Large nuclear and coal closures have rather made the European system far less flexible, limiting its ability to switch away from gas, when needed or to allow for gas markets rebalancing. -- October 13, 1:19 p.m. CT, link here.

Now, from the linked article today;

Pure Planet, which was 24 per cent owned by BP, supplied gas and electricity to around 235,000 customers, while Colorado Energy had an estimated 15,000 customers. 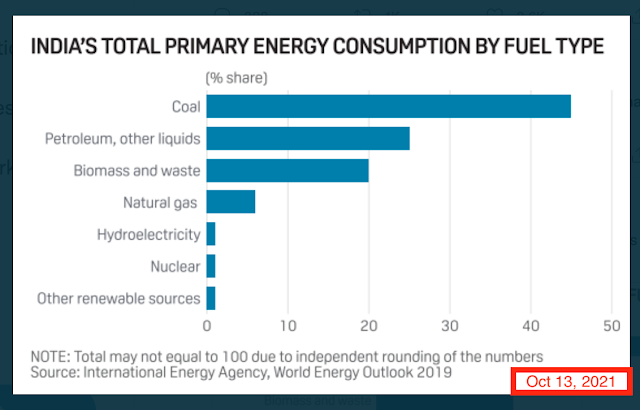 XLNX: hits a 52-week high. No news being reported.

This is a classic.

Our younger daughter has twin boys, born just as the lock downs in the US began back in February / March, 2020, time frame. When our daughter was brought to the hospital, other than her husband, no extended family members and no other visitors were allowed to visit her.

The boys have pretty much lived in a "bubble" for the first eighteen months of their lives. Until very recently, they had seen no one outside their own mom and dad without a mask. They see their parents and masked visitors performing a "hand-rubbing" ritual multiple times during the day.

Recently, on occasional outings to grocery stores, the boys have seen a new ritual.

About a month ago, their dad bought identical play tool kits, one each for each of the boys. The center piece, of course, was the toy drill press.

Again, these boys have seen nothing in their entire life that is not centered around being protected from Covid-19.

Look how the boys use that drill press.

Usual disclaimer: this is done for my benefit. I do it quickly. There will be content and typographical errors. I generally do not go back to correct errors. If this is important to you, go to the source.

Comments: it should be noted that in --

DUCs and inactive wells are tracked here.
Posted by Bruce Oksol at 10:08 AM No comments: