Does any more need to be said? Data links: nope, nothing of interest.  A "dog bites man" story.

The biggest story not being reported: all the Canadian oil sands oil that will be coming on line 2016 - 2019.  A fairly long lead time is required to develop oil sands oil fields. When crude oil prices were high, the Canadians began a lot of oil sands projects in Alberta. They will start coming on line between now and 2017. Once at full capacity, Alberta oil sands could be adding another million bopd to the global glut.

And, no, OPEC won't cut production.
Posted by Bruce Oksol at 11:14 PM No comments:

This is really cool. Uber was trying to make inroads in China. But then they ran into Apple.

Didi Chuxing, or "Didi" for short, is the "Uber of China," the most popular ride sharing service in China.

Tim Cook / Apple made a $1 billion investment in Didi this part June (2016) and now Apple has a seat on the board of directors at Didi.

Apple's Adrian Perica represents Apple on the Didi board. Perica was a former Goldman Sachs investment banker and handled key acquisitions like Beats.

This was a first for the company and gives Apple access to data and expertise on both electric and autonomous car technology.

Uber had hoped that Didi would fail at raising more capital to expand. Apple's investment in Didi in May, 2016, was instrumental in helping Didi Chuxing acquire Uber's Chinese operations in a $35 billion deal at the end of July.

Much, much more at Macrumors. Really, really cool. Most important takeaway has nothing to do with Uber vs Didi. The most important takeaway from this story is the fact that Tim Cook is in the good graces of the Chinese government. Priceless. Especially if one is selling smart phones there.

Uber CEO Travis Kalanick most likely has this on his playlist: 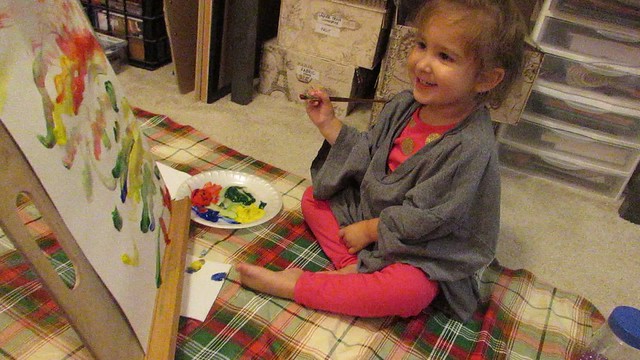 Sophia Painting
First Time She Ever Held a Paint Brush in Her Hand
Look at that smile, that technique.
Posted by Bruce Oksol at 7:37 PM No comments:

Email ThisBlogThis!Share to TwitterShare to FacebookShare to Pinterest
Labels: Video

According to RBN Energy, some data points:
In addition to what PPC has already brought on line and will complete this year (2016), these are PPC's plans for 2017:
In addition, it should be noted that more crude oil production will come on-line in western Canada:
Diluent pipelines of note:
So much more at the RBN post linked above.

Crude oil lease stocks refer to oil (currently about 31 million barrels) that is stored in tanks at sites across the United States where producers are drilling on leased land. Lease stocks are not yet available for commercial use, and in many cases, operators do not count them as production until the oil is transferred off the lease. -- EIA

Oil-sands expansion projects coming online and the resulting need for more diluent are among the drivers behind a number of midstream infrastructure projects in the province of Alberta, including natural gas processing plants and fractionators; oil and diluent pipelines; and oil/NGL storage facilities. The total volume of work is surprising, considering the fact that oil-sands production economics are iffy right now, if not downright upside down. Today, we continue our look at midstream projects under development within Canada’s Energy Province, this time focusing on gas processing and fractionation facilities.

Apple shares hit a 52-week high yesterday, and in pre-market trading today APPL is up almost 2%.

Mid-day trading: Dow 30 down 140 points. Wells Fargo warns of tough times. Ford is closing its Mustang factory in Michigan for one week after US sales for the vehicle plunged 32% in September. Ford reported earlier this year it will invest $1.6 billion to open new plant for small vehicles in Mexico. New Ford plant will create 2,800 new jobs. Minimum wage, union strikes, and ObamaCare come to mind.

Has presence in Grand Forks:
Over at SeekingAlpha: GE to buy rotor blades make LM Wind Power for $1.65 billion. LM Wind Power is based in Denmark.

When I was up in the Bakken, I was told that components for the new wind farms near Hebron and Tioga were coming from Denmark, Denver, and China.
Posted by Bruce Oksol at 7:21 AM No comments:

I'm following the DAPL story, but I won't be blogging about it until the situation is resolved one way or the other, unless something really piques my interest. But the DAPL issue sort of represents everything I can think of that "turns me off." I've moved on. And I'm going to bed.


You Don't Own Me, Lesley Gore

The movie with the following line was released earlier this year in a Blu-Ray edition: "I was born when she kissed me. I died when she left me. I lived a few weeks while she loved me."

If Barnes and Noble did not exist, Amazon.com would have to invent it.
Posted by Bruce Oksol at 12:20 AM No comments:

North American English Dialects -- Nothing About The Bakken -- October 10, 2016

For those interested in this subject, this is a pretty interesting blog, all done in one page, with lots of links to other pages. Be sure to check out the dialect of the author.

It should be noted that the Miles City, MT, area has its own dialect.

Warning: it will take you about a month of Sundays to completely "absorb" the linked post. Good luck. Have fun.
Posted by Bruce Oksol at 12:01 AM No comments: